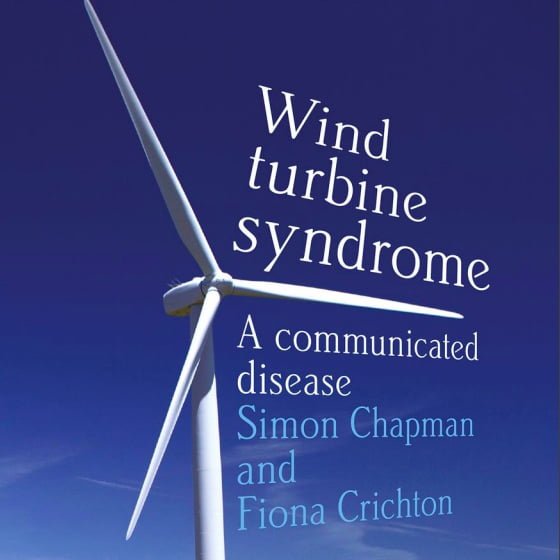 As sure as night follows day, every technological advance is met with doomsaysers who prophesy all manner of ills. Wind turbines are no exception.

Wind Turbine Syndrome: A Communicated Disease dissects the “personal irrationalities championed by those in power” that have seen wind power swept up in broader culture wars where climate change is only one frontier.

“I’ve always been fascinated by low (or no) risk health panics which cause anxiety in communities, and how these are communicated in tropes, memes and factoids and cause ‘contagion’ of this anxiety,” explains Chapman. “I’ve dubbed this ‘communicated disease’ and this is a book about the idea that wind turbines are the direct cause of illness in exposed communities.”

Free, open-access link to our new book on #WindTurbineSyndrome https://t.co/t57xrPXDMA — scroll down inside to get to the pdf link. It’s 10MB pic.twitter.com/hMJk7SXnrq

Chapman co-authored the volume with Fiona Crichton, a social psychologist from New Zealand, and the pair describe wind farm panic as a ‘nocebo’ effect — where something believed to be harmful will produce such an outcome, even if benign:

We argue that concerns about wind turbines can foment anxiety in some people who have those concerns. Anxiety can produce real affective somatic symptoms, and some of those who loathe windfarms attribute their symptoms to direct impacts of the turbines, not to their anxiety about those alleged impacts. We look closely at several areas of evidence that make the case for direct effects impossible to sustain.

Social scientists working in health and medicine have long asked fundamental questions about patterns of illness that do not conform to the predictions of medical models. We ask questions about the social, cultural, economic and communicative environments that see often highly variable susceptibility in populations to putative risks

The book details how political opponents attempt to derail the debate, and Chapman writes that “in a career in public health of some 40 years, I have rarely encountered the virulence and sheer nastiness that I have experienced since becoming involved in this issue.”

Former environment minister and Oils frontman Peter Garrett is among those who contributed to the foreword, and describes Chapman’s writing as “erudition and conviction combined”:

“Simon Chapman has become a touchstone for everything the extreme right hates: arguments grounded in fact, a passion for a healthier planet, and sometimes just a dose of plain common sense.”

Though it focuses on wind farms, Chapman says anyone working in public health will find “familiar war stories in those chapters”:

“With renewable energy front and centre of all our hopes to mitigate climate change, I think this is one of the most important books I have written.”

Wind Turbine Syndrome: A Communicated Disease will be launched at Gleebooks in Sydney this Friday, December 1, by renewables activist Simon Holmes a Court and Guardian cartoonist First Dog on the Moon