Home The Croakey Archives Croakey projects archive #JustJustice Reconciliation in Australia: where do we stand & how does that help/hinder Closing the Gap?

Reconciliation in Australia: where do we stand & how does that help/hinder Closing the Gap?

My 11 year old son brought home a school work sheet last week for his project on ‘Australia as a nation’. It had four pictures on it that he had to decorate: Parliament House in Canberra, a map of Australia, the Australian flag, and an image of the Anzacs.

Nothing about the First Peoples of this nation.

He quietly added an Aboriginal flag in the corner but the message of that sheet goes to the heart of a landmark report released today by Reconciliation Australia on the State of Reconciliation in Australia: Our history, our story, our future.

One of its findings is that Australians’ knowledge of Aboriginal and Torres Strait Islander histories andcultures is limited (only 30 per cent are knowledgeable) but most Australians (83 per cent) believe it is important to know more and strongly support Aboriginaland Torres Strait Islander histories being a compulsory part of the school curriculum.

The report looks at what has been achieved under the five dimensions of reconciliation shown in the image above – race relations, equality and equity, institutional integrity, unity, and historical acceptance – and makes detailed recommendations on how we can progress reconciliation into the next generation. But, with the finding that one in three Aboriginal and Torres Strait Islander people had experienced verbal racial abuse in the six months before the survey, it warns:

While much goodwill and support for reconciliation is growing across the Australian community, racism, denial of rights, and a lack of willingness to come to terms with our history continue to overshadow the nation’s progress towards reconciliation. 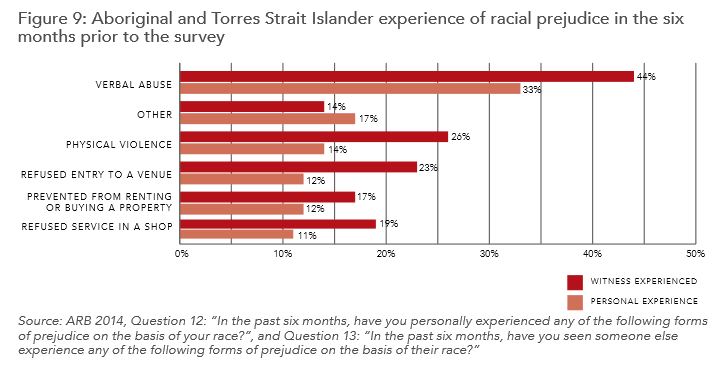 Croakey’s Melissa Sweet has done a Twit-series on the report at @Croakeyblog – see it below for highlights from the report, with some of the reactions to its release. Here’s a summary of the recommendations.

The report provides important context for the release tomorrow of the latest Closing the Gap update to Parliament, particularly after the 2015 update was described by then PM Tony Abbott as “profoundly disappointing” with most of the targets not on track to be met. Reconcilation Australia says that many reviews have suggested that unsatisfactory progress is not due to the level of spending, but the way funding has been allcoated and delivered:

This criticism was the catalyst for reforms under the Indigenous Advancement Strategy (IAS) in 2014. However, rather than the ambitious IAS reforms resolving many of the issues they were meant to address, early indications are that they were too much, too soon, and have left a trail of anxiety and uncertainty for many service providers

And don’t miss the powerful intro to the Reconcilation report from Aboriginal leader Patrick Dodson who warned today that Closing the Gap targets are ‘doomed to fail‘ without more input from Indigenous groups and services and questioned Prime Minister Malcolm Turnbull’s commitment to Indigenous affairs. 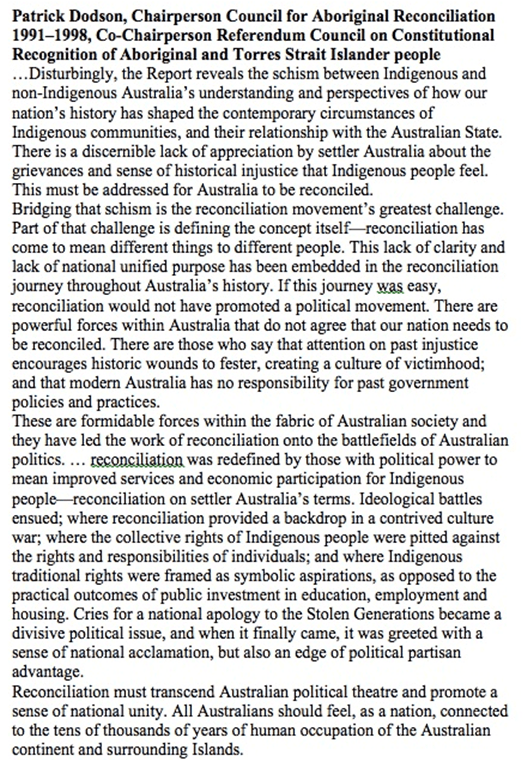 Croakey readers may also like to revisit this 2013 post from Tim Senior on the difference between the work of the Close the Gap and the Closing the Gap campaigns, and why it matters.

This week also saw the release of a welcome evaluation of the Northern Territory Intervention by the Castan Centre for Human Rights Law, which found it had failed to deliver substantial reform on areas covered by Close the Gap goals and violated human rights obligations. 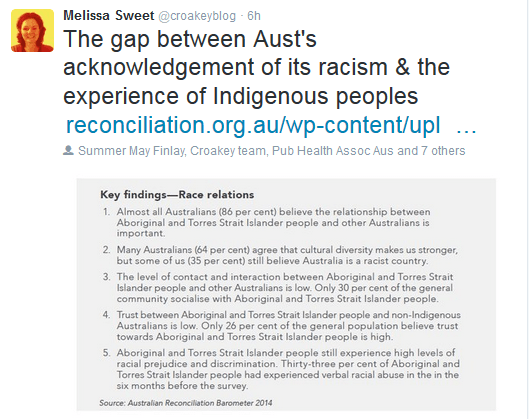 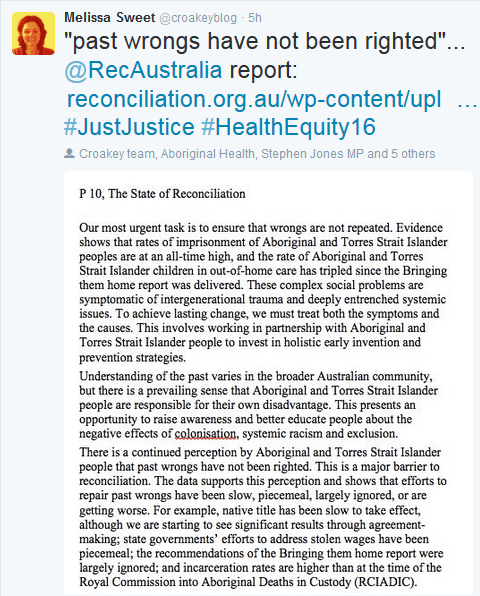 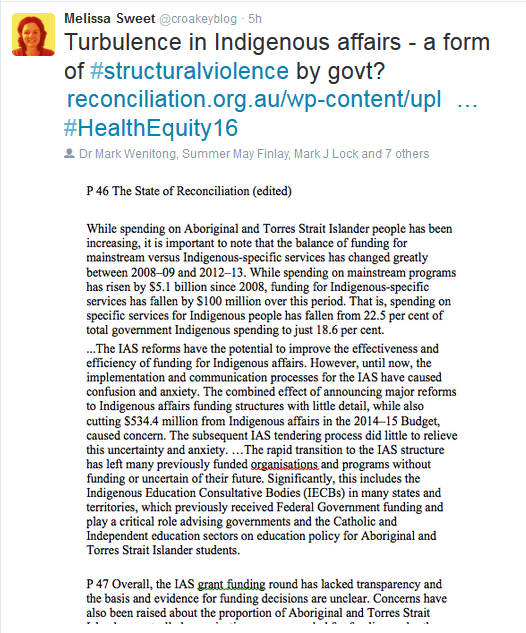 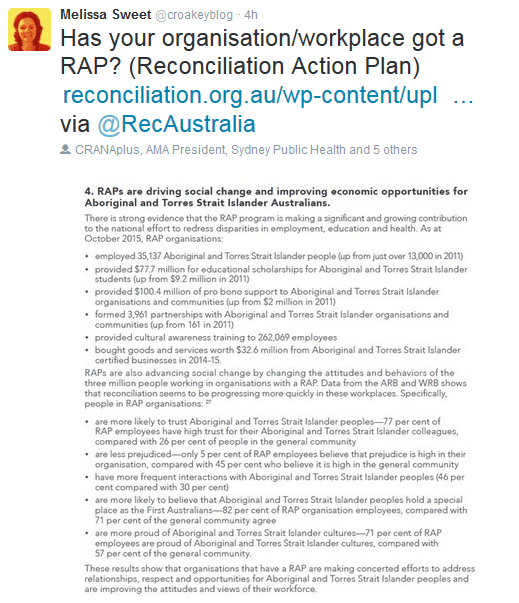 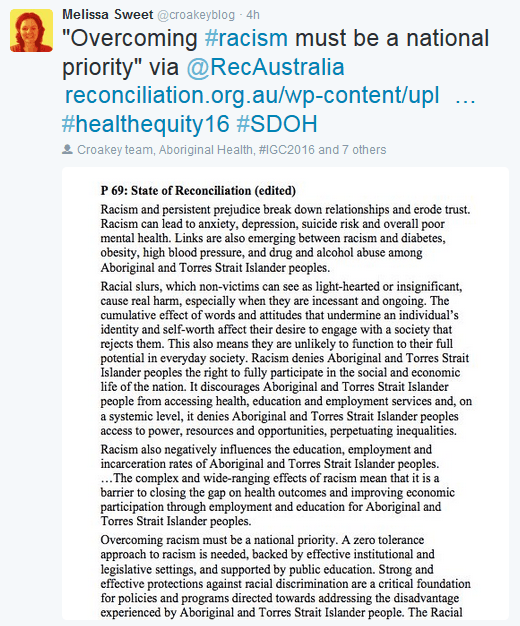 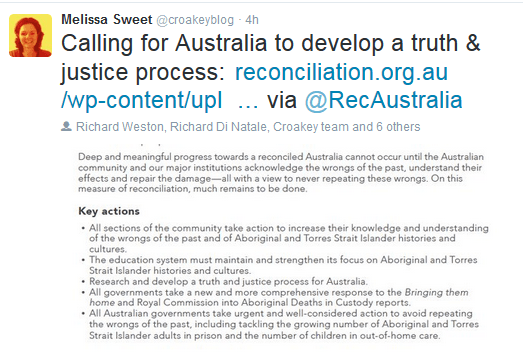