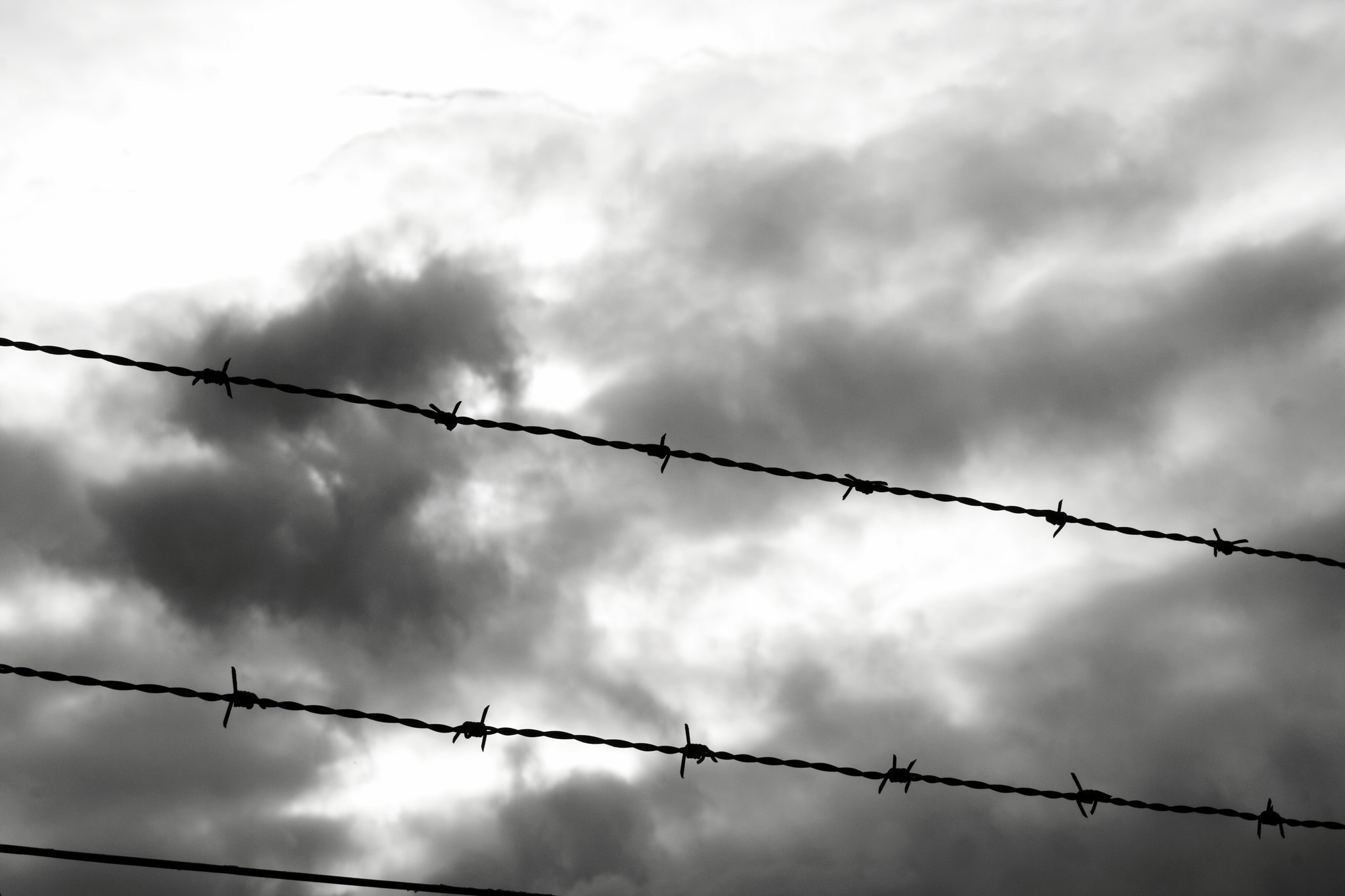 Targeting prevention and the root causes of offending, shifting the emphasis of the justice system to restoration and restitution, and greater control and accountability for Aboriginal and Torres Strait Islander communities are some of the key reforms recommended by a sweeping review of imprisonment and recidivism in Queensland.

The Queensland Productivity Commission inquiry, which was overseen by Kim Wood and Professor Bronwyn Fredericks, published its final report earlier this month, drawing on input from some 600 stakeholders in the state’s criminal justice system.

It provides a comprehensive, if ambitious, blueprint for reducing imprisonment through a range of reforms designed to tackle the rising tide of imprisonment in Queensland — particularly of Aboriginal and Torres Strait Islander Australians — even as overall rates of crime decline.

Rather than reflecting increasing criminality, the report found that burgeoning imprisonment rates (a spike of more than 160 percent since 1992) had primarily been driven by policy and system changes, with the majority of sentences (62 percent) for non-violent offences and of short duration (media 3.9 months). About 30 percent of prisoners were estimated to be chronic but relatively low-harm offenders.

The costs were significant ($110,000 per prisoner per year in direct costs, and $48,000 in indirect costs) and offered diminishing returns. When it came to less serious offences, the report said prison actually imposed a net cost rather than benefit to society (see below).

Current approaches overlooked the strong association between social and economic disadvantage and imprisonment, with almost half of the state’s prisoners likely to have been previously hospitalised for mental health issues and/or have a history of child protection.

This risk profile was especially true for  Aboriginal and Torres Strait Islander people, reflecting “entrenched social and economic disadvantage that has its roots in historical policies”, the report found.

Overall, Indigenous imprisonment rates were around 10 times non-Indigenous rates, and they have grown around 50 percent faster over the past decade to increase by around 45 percent overall. They are now among some of the highest rates of any group in the world, with Indigenous people making up around 31 percent of the Queensland prison population despite comprising just 4.6 percent of the state’s citizens.

An Indigenous male in Queensland has an almost 30 percent chance of being imprisoned before the age of 25, and 80 percent of Indigenous prisoners have been to prison before. 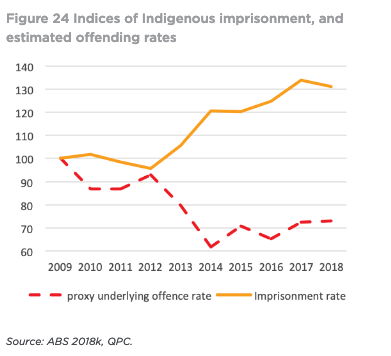 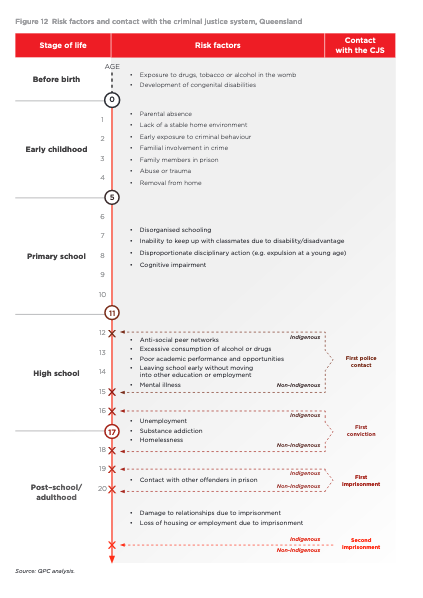 Breaking this cycle required the kind of wholesale reforms previously recommended by the Commission in its inquiry into remote community service provision, transferring accountability and decision-making to communities and regions and promoting user-driven place-based solutions.

In the justice system, some examples of this could include:

Instead of increasing sentence length and more punitive rhetoric, the Commission said a wider range of sentencing options were needed as well as solutions outside of the criminal justice system including victim restoration and restitution, diversionary approaches and targeted community-level interventions.

Fines needed to have community service rather than prison as an escalation, and should be imposed as a proportion of income rather than a flat rate,  the report said. Reducing remand (about 30 percent of all prisoners, and a number that had doubled since 2012) should also be a priority. 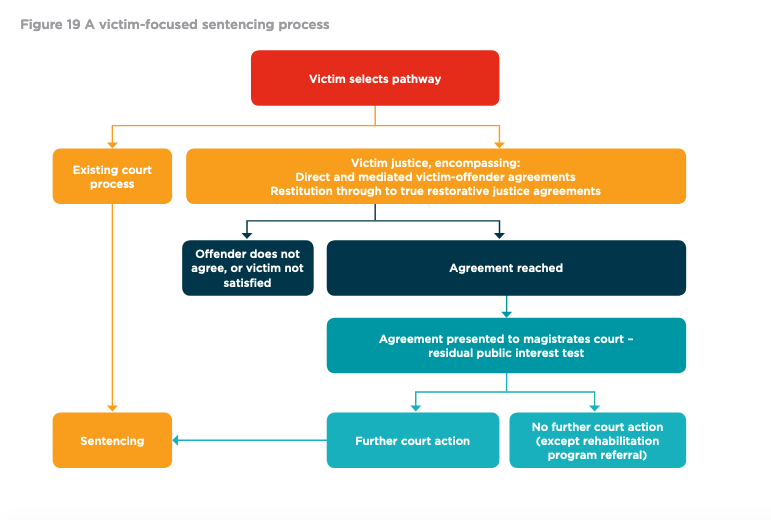 There was a need to reduce the scope of criminal offences (which had increased in number by almost 70 percent since 1970), with particular attention to the decriminalisation of drug use, the report said.

Some 1,840 people are locked up in Queensland every year for drug offences, but availability and use of drugs is as prominent as ever, and criminalisation was actually driving more hazardous use (see below). Drug use is now responsible for more deaths in Queensland than road accidents, rising by 144 percent since 1997.

Legalising the use and possession of cannabis would deliver large net benefits, the report found, with further benefits still if te government chose to legalise and regulate supply of other lower-harm drugs such as MDMA. 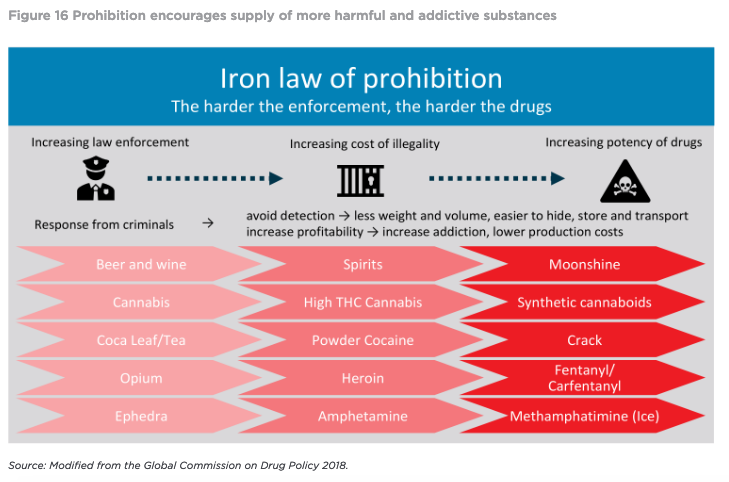 To oversee the implementation of this ambitious reform agenda and ensure policy has a firm evidence base, the report recommended the establishment of a statutorily independent Justice Reform Office.

You can access the full report here and appendices here.