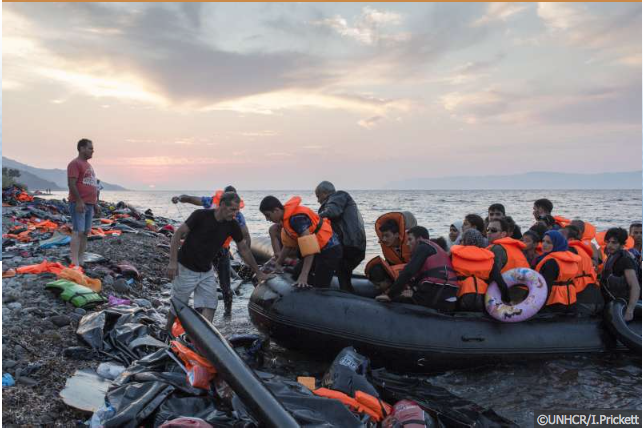 While we have been distracted with the revolving door of politics this week, the major humanitarian crisis reflected in the stories of the thousands fleeing Syria continues. Europe has opened borders and closed them as desperate people search for a safe place to call home. Last weekend rallies were held across Europe to show solidarity with refugees. This week The Age reports  pepper spray and water canons at the border between Serbia and Hungary.

Many thanks to CRANAplus for permission to republish this post by Christopher Cliffe which reminds us why this crisis is a health crisis and of the dangers of turning away.

It’s hard this week to not speak about the shocking and tragic displacement of millions of people across the Middle East and Europe, as a direct consequence of the Syrian conflict and the ideological cleansing being undertaken by ISIS.

The conflict is complicated and a long way from remote Australia, but the image of the dead child being carried from the waters in Bodrum in Turkey gave the world an image to which they could relate.

4 million Syrians are currently refugees in neighboring countries, with 7.6 million people internally displaced within Syria, making this a crisis of historical proportions. The UNHCR estimates that 51% of refugees are less than 18 years old, half of all Syrians houses are destroyed and 75% of the population now lives in poverty.

Many of us who work in remote health, use our transferable skills and experience to transition in and out of international development work and / or detention centres. As such we know first hand the poverty, poor food security, lack of access to clean water, overcrowding and the rise of criminality, extortion, rape and violence that occurs when large groups of terrified civilians are forced to displace from their homes.

As remote health professionals we also have insight into how important historical and cultural homelands are to peoples health, wellbeing and identity. The evidence shows that people don’t want to leave their homes and families, and once peace returns they want to go home.

It’s great that the world, including Australia, is grappling with the consequences of this conflict, however the priority must always be to resolve the conflict. We should fear for the 12 million people who haven’t been able to escape, it’s often too late when we hear about their fate!

Who can ever forget Rwanda, Kosovo, Darfur…

There are no easy answers, but I think that we owe it to the world community, our professions and ourselves to be well informed. Turning a blind eye doesn’t stop human rights atrocities; it gives them an opportunity to continue. Read more here.

Christopher Cliffe is an experienced leader in the field of remote health care, having worked as a remote area nurse in a variety of remote and rural communities in South Australia and the Northern Territory. Although Christopher was born and raised in rural South Australia, his work has taken him far afield, including working for the Red Cross in war and disaster zones in Sudan, Abkhazia, Afghanistan, Papua New Guinea and Sri Lanka. He has also worked in the wake of large scale tragedies including the 2002 Bali bombings, the 2004 Boxing Day tsunami, and the 2010 earthquake in Haiti.