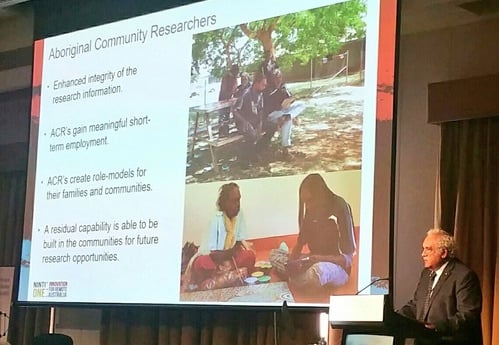 “I would like to be spoken to clearly and in an understandable way by doctors who like Aboriginal people.”

This simple request, made in a consultation process undertaken by Professor Allan Cass and his team at the Menzies School of Health Research, reveals much about the experiences of Aboriginal and Torres Strait Islander people when accessing mainstream health services.

Cass was speaking at the Closing the Gap plenary session at the 6th Rural and Remote Health Scientific Symposium hosted by the National Rural Health Alliance.

The session was opened by the Minister for Rural Health, Senator Bridget McKenzie, who set the tone for the morning by stating that “the health of the First Australians is everyone’s business”.

She went on to highlight the crucial and integral role of Aboriginal Community-controlled Health Services and Indigenous health leaders in efforts to improve Indigenous health, and also emphasised the importance of “sitting down and listening, hearing what is being said, making the changes needed and investing at the local level”.

These were encouraging messages, as were her comments about the importance of addressing the social determinants of health across all areas of government.

However, many of the delegates, when discussing her speech after the session, commented on the gulf between her seemingly genuine sentiments and the policies supported by the Coalition Government, such as the Northern Territory Intervention.

The Minister was followed by Professor Tom Calma AO, Chancellor of the University of Canberra, who focused his presentation on the importance of involving Indigenous people in health-related research and policy making.

He expressed some cynicism about “fly in fly out” policy makers and researchers and – “even worse” – people based in Canberra who make policies for rural and remote Australia.

Calma reported that some communities reported “consultation fatigue”, feeling that they were constantly being consulted without any clear outcomes. This results in communities feeling jaded and then not participating genuinely in consultation process, he said. The mantra “Do it with us, not to us” was suggested as a useful guide to working with Indigenous communities.

Their varied roles include undertaking consultations, co-designing projects with researchers, planning, project management, reporting and evaluation. He also stressed that a crucial role was to provide feedback to community at the end of the projects to ensure they understood what had been achieved.

Professor Allan Cass identified the strengths of these Indigenous health workers, including having an understanding of the language, culture and history of the communities in which they work. He explained that this maximises the impact of the project by avoiding the time and resources wasted when “outside” people first have to get to know the community and gain their trust before attempting similar research.

Also presenting was Professor Judith Katzenellenbogen, who discussed her research on cardiovascular disease (CVD) in Indigenous Australians. She stated that CVD contributes 27 percent of fatal burden of disease gap between Indigenous and non-Indigenous Australians. Therefore, reducing the incidence and improving the treatment of people with CVD could go a long way towards closing the gap.

Katzenellenbogen outlined the main features of the BAHHWA project, which has successfully reduced the impact of CVD in some Indigenous communities. At the core of the program was a commitment to working with the community to identify and address priorities areas of action.

In reporting research, Professor Katzenellenbogen argued against presenting a deficit model of Indigenous health, as this overlooks the considerable strengths of patients and communities.

She said that while it is important to acknowledge the health challenges facing Indigenous communities, it is also important to recognise their resilience and to include empowering messages when reporting the results of Indigenous health research or programs.

One strategy she suggested to support the translation of research into policy and practice was the development of an “easy reader” stakeholder report. This was done for the BAHHWA project, and involved establishing a stakeholder reference group that influenced both the content and the style of the research.

Professor Allan Cass made a strongly worded plea for the need to address broad determinants of health, such as employment and education. He presented the findings of research he had undertaken on the importance of listening to Aboriginal people’s problems.

He argued that kidney disease is unique in that it requires people to leave communities for treatment over the long term. This has profound impact on both individuals and communities where typically 1 in 40 adults require diabetes.

As an example of the difficulties in accessing fresh food in rural and remote areas, Cass showed a slide of a six-dollar package of browning lettuce, supporting other evidence that a food basket costs 60 percent more in rural settings.

Cass described participatory action research undertaken by his team, which challenged his assumptions (and those of the medical community generally) about the efficacy of the way they communicate with patients. This research involved filming interactions between health care providers and patients with each group providing feedback from their perspective.

At one regular session, he felt he had communicated very effectively, but when asked afterwards the social worker had received a very different message. For Cass, this highlighted the importance of “deep understanding” and of recognising the unequal balance of power and dominance within the consultation process.

This was – at least partly – the result of an assumption made by health professionals that Indigenous people did not want transplantation as a treatment option. This view turned out to be false once genuine consultation with Indigenous patients was undertaken and their views sought.

Cass recommended that a “whole of systems approach” be taken to addressing chronic disease within Indigenous communities, and that all care providers listen deeply to what patients say.

While warning that the current rise in obesity could result in the health gap widening instead of closing, he did offer some hope in the form of a new MBS item number for dialysis provided in very remote areas. He said this would address the current financial barrier to the provision of this service in many communities.

Questions and comments from delegates at the session focussed on the importance of supporting research driven by Indigenous researchers and ensuring that health care services and other organisations involved in Indigenous health are culturally safe and free from institutional racism.

A useful explanation of institutional racism was provided by AHHA’s Chris Bourke who explained that this form of racism did not describe personal behaviour but reflected how institutions operate.

A telling indicator of whether an organisation or system incorporates institutional racism is to examine whether it produces poorer health outcomes for specific groups.

He also discussed the concept of “diversity management” and explained that organisations can actively recruit employees from specific under-represented groups to address imbalances within their staff. 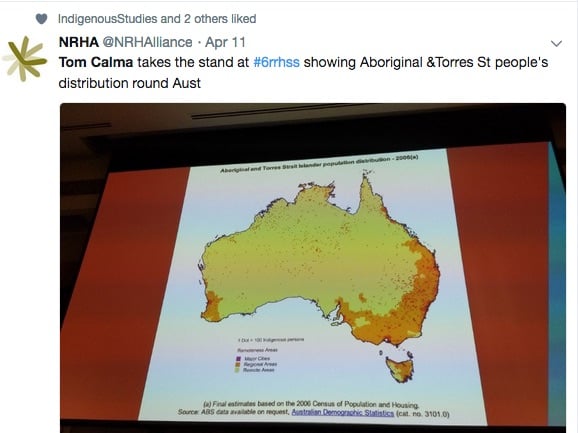 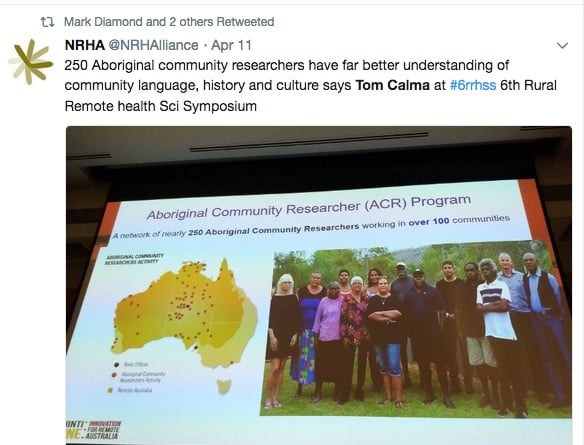 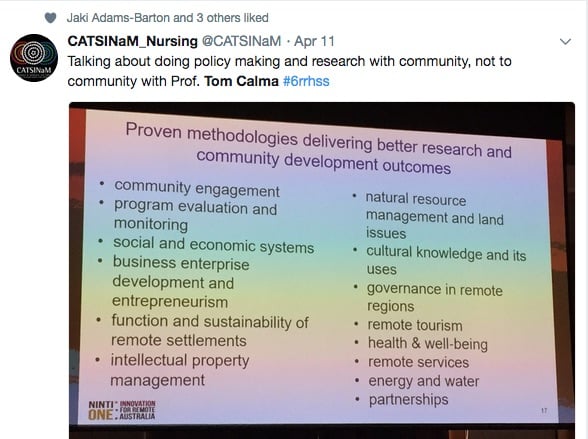 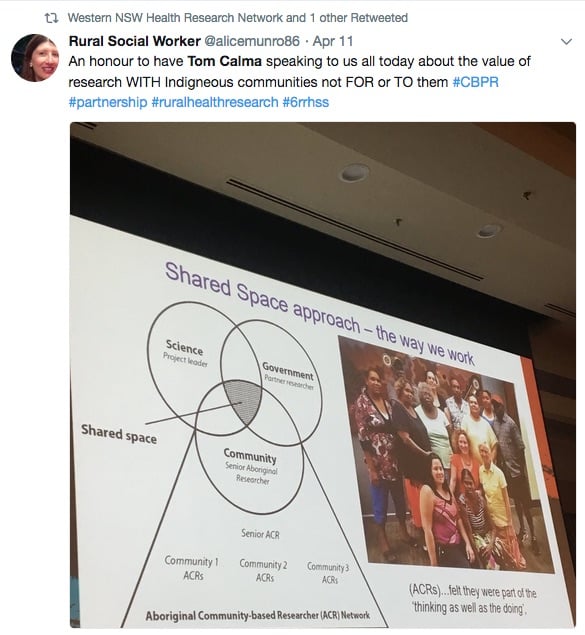 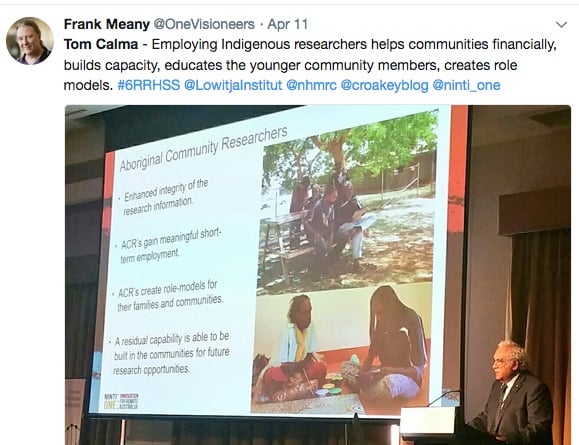 Tweets below by Jennifer Doggett for @WePublicHealth 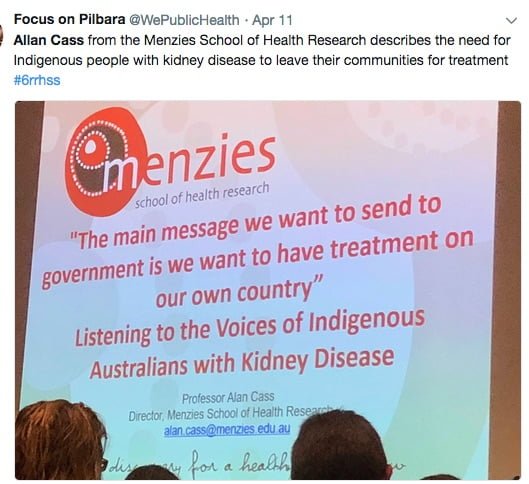 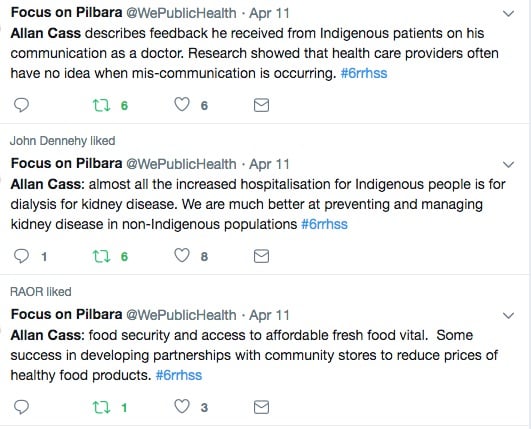 • Jennifer Doggett is covering the Symposium for the Croakey Conference News Service. Follow the discussion at @WePublicHealth, @NRHAlliance and #6rrhss.

Track our coverage at this link.