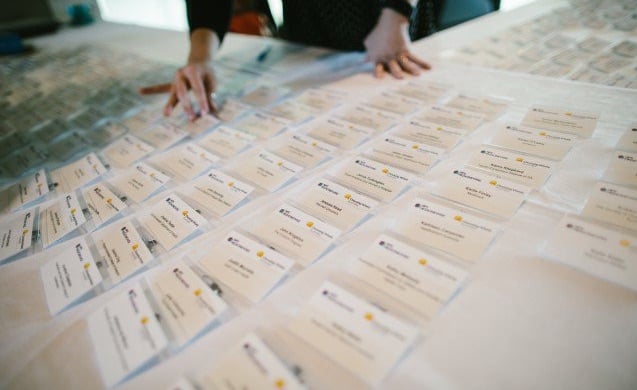 Reviewing progress of the Choosing Wisely movement – and challenges ahead

Since launching in the United States in 2012, the Choosing Wisely campaign has spread further than was expected, but now faces the challenge of demonstrating its “effectiveness in improving outcomes and making a difference on measures of quality and safety that matter to clinicians and patients”.

That is the verdict of an article in the May 15 edition of JAMA examining the impact of this movement to tackle overuse of tests, treatments and procedures, which has now spread to more than 20 countries.

The article further notes: “In general, most people are not eager to change their old habits, and new innovations need to offer a relative advantage over the old ways of doing things. For a new approach to take hold, it must make outcomes better or processes simpler.”

Daniel Wolfson, one of the article’s authors and a prominent figure in the Choosing Wisely movement internationally, is a keynote speaker at the 2018 Choosing Wisely Australia National Meeting in Canberra next Wednesday (30 May).

The second such annual event, the meeting will provide “an opportunity for health professionals, consumers, researchers, funders and policy makers to come together to discuss, engage and network on topics related to reducing unnecessary care”.

Jennifer Doggett, who will cover #OktoAsk2018 for the Croakey Conference News Service, spoke this week with Daniel Wolfson, Executive Vice President and Chief Operating Officer of the not-for-profit ABIM Foundation, about the importance of grass roots and relationship-based approaches, amongst other topics.

Daniel Wolfson has been involved with Choosing Wisely in the USA since its inception in 2012 and is a passionate advocate for this unique and profession-led campaign.

“Choosing Wisely arose from an initiative that asked speciality societies to nominate five practices within their speciality that harmed rather than benefitted patients. This led to a broader campaign focussed on reducing low value or harmful care,” Wolfson explained.

“From its inception Choosing Wisely has been led by clinicians and strongly based within the context of medical practice. This is one important reason for its success. It takes into account factors often ignored when trying to impose changes to health care, such as respect for clinicians’ professionalism and the dynamics and power relations that characterise medical consultations,” he said.

Instead of being driven by rigid goals and targets, Wolfson explained that Choosing Wisely is guided by a set of health care principles. These include the importance of evidence, transparent decision-making and informed choices. These are values shared by both providers and consumers and Choosing Wisely seeks to align these values through messages such as ‘more is not better’ and ‘quality over quantity’.

Supporting consumers to become more active participants in their care is a key component of Choosing Wisely.

“Patient education and the development of information resources targeting consumers has been a major feature of the campaign in the US. The overall aim of this is to even the playing field and address the information asymmetry that so often characterises medical consultations,” Wolfson said.

He added that for Choosing Wisely to be successful “…both the health care provider and the consumer need to be armed with the information and skills required to have a meaningful conversation about care options.”

Wolfson identified this grass roots and relationship-based approach as giving Choosing Wisely an advantage over a traditional approach to quality improvement. He said:

Choosing Wisely focuses primarily on the relationship between the provider and consumer and empowers both to make better decisions. This contrasts with a more ‘management-driven’ approach to influencing medical practice. In this way Choosing Wisely strengthens the intrinsic motivation and ability of doctors to provide the best care to their patients.”

As well as being more successful in driving change, Wolfson noted that this approach also leads to greater clinician engagement and “…more creative ideas and problem solving than a ‘top down’ campaign.”

Another important feature of the Choosing Wisely campaign is that it supports the autonomy of clinicians and the diversity of individual consumers:

There are no absolutes with Choosing Wisely. Sometimes after discussing their options, consumers and their health care providers will choose a test or procedure and this is OK. The important thing is that they have considered the evidence and made an informed choice.”

Wolfson praised the role of NPS MedicineWise in implementing Choosing Wisely Australia and stressed how lucky Australia is to have the organisation. In particular, he identified its national scope and ability to both disseminate advice on quality improvement and provide infrastructure support as valuable contributors to its success.

This, he said, “increases uptake and awareness and helps promote successful changes”, and will add to the success of Choosing Wisely Australia in driving positive changes.

There is some impressive evidence that Choosing Wisely has been successful at a local level in the USA, in particular in relation to the use of antibiotics, imaging and laboratory tests. However, due to the fragmented health system in the USA, there is no national data on its impact.

This is why Wolfson is keen for Australia to take the lead in evaluating the impact of Choosing Wisely Australia on a national scale.

“In Australia you have the valuable opportunity to measure success through a centralised database,” he said. “This will identify the most successful strategies and strengthen the impact of the campaign.”

Wolfson identified one of the key differences in the approach to Choosing Wisely between Australia and USA as the ‘collective approach’ to health care in Australia. He attributes this largely to our public health care system which fosters community ownership of the health system, rather than the more individualistic, ‘n=1’ culture in the USA.

Wolfson said one of the main challenges to implementation of Choosing Wisely in the USA was the challenge of reaching the diversity of medical practices, many of which are small and operate independently of larger hospital and health care networks.

He also noted that a time-based fee-for-service funding system which rewards clinicians for providing ‘more services’ was a real barrier to the promotion of quality over quantity in health care. He said:

Clearly a per capita funding system, where funding is allocated based on patient numbers and includes both quality and process measures, is better than a volume or time-based funding system.

The more we base providers’ reimbursement on volume, the harder it will be to promote the key message of Choosing Wisely: that more is not necessarily better.”

One of the next priorities for Choosing Wisely in the USA is implementing the campaign in disadvantaged and minority populations.

“This is the frontier of Choosing Wisely in the USA,” Wolfson explained. He said:

We are currently going through the process of adjusting the campaign to suit different population groups. The principles will remain the same but the way they are realised could be quite different, due to the different relationships that people from disadvantaged and minority groups may have with health care providers.”

Interestingly, Wolfson reported that research indicates that the ratio of low value care to appropriate care in populations under-served by the health system is around the same as that for the general population.

However, due to the lack of trust that often exists between disadvantaged communities and mainstream health services, the ‘Choosing Wisely conversation’ between providers and consumers might focus more on how to provide optimal care, rather than on reducing unnecessary care.

Another current focus of Choosing Wisely in the USA is to work at a state level on establishing statewide learning collaboratives to develop a regional approach to reducing low value and unnecessary care.

This has the benefit that consumers in the region hear a consistent message from their health care providers, which strengthens the overall impact of the campaign and accelerates change.

• Follow #OktoAsk2018 for more news from Daniel Wolfson’s presentation to the Choosing Wisely Australia National Meeting in Canberra next week.

• Here is some pre-reading, with this compilation of Marie McInerney’s stories from a national meeting in Melbourne last year marking the second anniversary of the Choosing Wisely initiative in Australia.

Meanwhile, registrations are open for a short while longer… 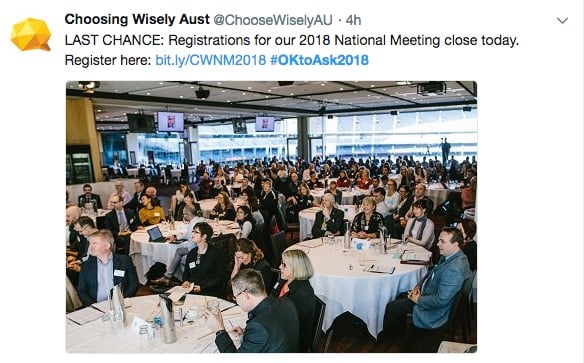