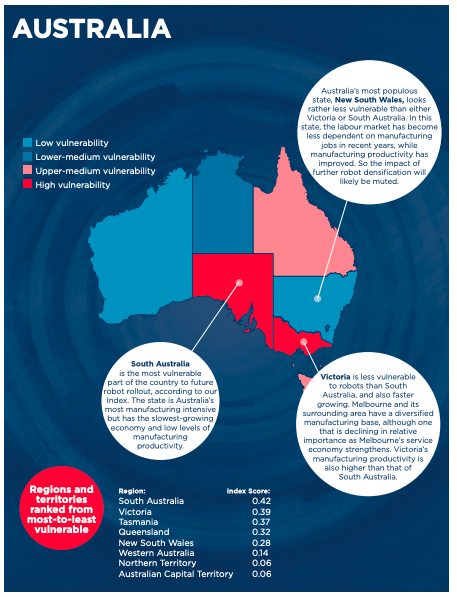 Rise of the robots and the deepening economic divide

As automation gathers pace and sophistication our economy will be transformed in ways yet to be seen, but the rise of the robots will displace millions of the most vulnerable workers from secure employment, deepening inequality, a new report warns.

According to the report ‘How Robots Change the World‘ from consultancy firm Oxford Economics, up to 20 million manufacturing jobs are expected to be lost to automation by 2030, with a disproportionate toll on lower-skilled workers and poorer regions.

“In many places, the impact will aggravate social and economic stresses from unemployment and income inequality in times when increasing political polarisation is already a worrying trend,” writes Oxford Economics CEO Adam Cooper in the foreword to the report.

The analysis shows that for every one robot installed worldwide, 1.6 people lose their jobs, but in any given country, this effect is roughly double in the poorest regions compared with the most wealthy:

As the pace of robotics adoption quickens, policy-makers will be faced with a dilemma: while robots enable growth, they exacerbate income inequality. Automation will continue to drive regional polarisation in many of the world’s advanced economies, unevenly distributing the benefits and costs across the population. This trend will intensify as the impact of automation on jobs spreads from manufacturing to the services sector, making questions about how to deal with displaced workers increasingly critical.”

The report warns that existing regional inequalities will intensify, with rural areas heavily dependent on labour-intensive, low-productivity, technologically-dated industries to suffer most while urban populations are spared.

As seen with the so-called rust belt effect in the 2016 election of Donald Trump, the report warns that such events tend to generate “political polarisation”. 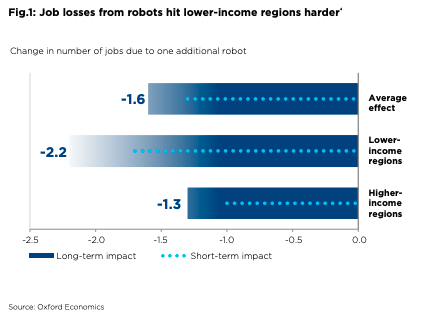 Australia was one of seven economies chosen for modelling in the report, with the authors mapping which regions will be most and least vulnerable to automation creep.

By their reckoning, South Australia will be hit hardest by the rise of robotics as the nation’s most manufacturing-intensive and slowest-growing region, with Victoria following closely behind.

The ACT and NT will be at lowest risk, while resources-rich Queensland — home to the contentious and eventually fully automated Adani mega-mine — was judged to be moderately vulnerable.

Given some of the parallels between the Trump victory and Australia’s recent federal election, where blue collar workers — particularly in Queensland — swung away from the Labor Party, the report provides plenty of political food for thought. The Guardian piece on the report is also worth a read.

Health and the gig economy

While manufacturing is an obvious target for automation, the report also argues that such technologies are taking hold in the services sector, including in health.

Looking ahead, it sees a place for robots carrying out specific tasks such as pathology specimen transport or pharmaceutical dispensing, particularly in the controlled, process-driven environment of a hospital. It notes that robot-assisted surgery is already taking place, and cites other examples of health robotics in action, including the Savioke Relay.

We covered a fascinating presentation from last year’s Australasian College of Emergency Medicine meeting in Perth on the intersection of health care and cutting edge technology, which looked at some of these issues.

This Eurofound paper on the implications of automation for employment also offers some interesting insights, arguing that it not only displaces workers from jobs but also threatens working conditions and industrial relations by altering the balance of power in a workplace (robots: the ultimate scabs).

It issues similar warnings to the Oxford Economics report on the sociopolitical implications:

Although history suggests that (in the long term) the employment effects of automation will probably be absorbed by the economy (although in unpredictable ways), it also shows that the large-scale processes of economic restructuring associated with technological revolutions can be (in the short and medium term) socially and politically catastrophic.

The terrible conditions of the working class in England during the Industrial Revolution, or the terrifying political consequences of the crisis that followed the Fordist Revolution in the 1930s, testify to that.

…The potential effects of automation on employment and society highlight the need to assess and redesign economic institutions to deal with the social and political tensions that can be expected as a result of the digital revolution.”

It also highlights the threat to privacy and autonomy of workers posed by digitisation, and the fragmentation of collective bargaining and erosion of working conditions under the gig economy, as well as the potentially exploitative nature of digital platforms:

These are not ideal psychosocial conditions for work and can often be associated with feelings of alienation.

At the same time, some categories of platform work can provide autonomy and flexibility, allowing people who may otherwise find it difficult to participate in certain types of employment.

The different categories of platform work are very heterogeneous, and can have very different implications in terms of employment and working conditions.”

This is important reading given the ongoing debate in Australia on the place of digital monoliths like Google and Facebook in our democracy.