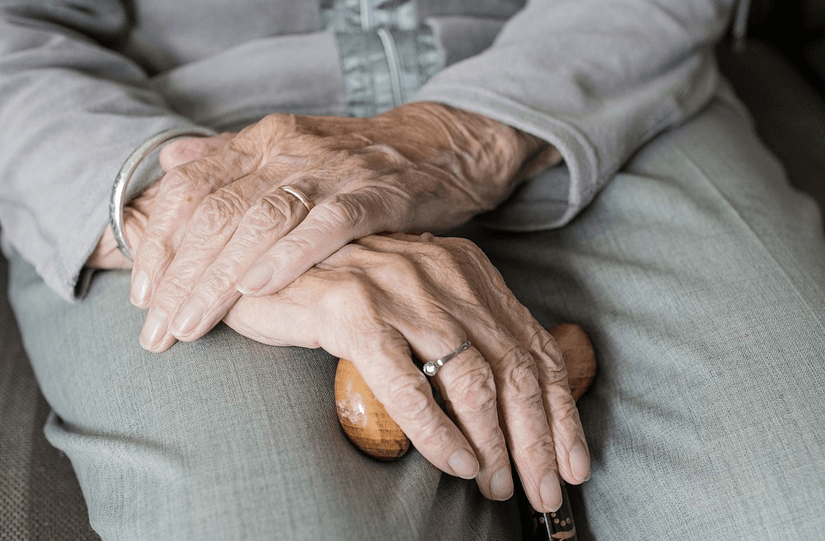 As is being widely reported, Prime Minister Scott Morrison today announced a Royal Commission to investigate the quality of care provided in residential and home aged care in Australia, including for young Australians with disabilities, in the wake of widespread revelations of abuse and neglect over many years.

It came ahead of a widely promoted two-part report on the treatment of the elderly in aged care by the ABC’s Four Corners, which begins on Monday night.

In a statement jointly issued with Health Minister Greg Hunt and Aged Care Minister Ken Wyatt, Morrison says the Terms of Reference of the Royal Commission will be determined in consultation with the community, including residents and their families and aged care providers, but are expected to cover:

The announcement has been broadly welcomed (see some of the lead responses below) though many groups have pointed to a slew of recent inquiries that have already uncovered significant failures, abuse and neglect, and warned that government shouldn’t delay urgent reforms already underway or recommended while waiting for the findings of the Royal Commission.

Those recent inquiries include:

Disability groups and advocates also welcomed the news of the Royal Commission, particularly its focus on issues for young people with disability who live in aged care.

“Young people do not belong in aged care. The NDIS is not working to get young people with disability out of aged care and into the community where they belong,” said Disabled People’s Organisations Australia (DPO Australia) spokesperson Therese Sands.

However they were dismayed that ongoing calls for a Royal Commission into violence and abuse of all people with disability continue to have been ignored. Sands said:

Violence and abuse of people with disability is systemic. The evidence is extensive and compelling. The violence can no longer be ignored.”

See also the Twitter thread at the bottom of the post from disability advocate Christina Ryan who said she was starting to feel like there could be a Royal Commission into “just about anything except violence and abuse of people with disability”. She said:

I’ll just crawl back into my hole now & be a good little compliant, grateful cripple, no problem. #RoyalCommission #Disability #auspol).

Sands said the Royal Commission must include issues for people with disability who are over 65 and not eligible for the NDIS, who experience considerable inequity in aged care that puts them at significant risk of harm, violence and abuse. It should also look at unique issues, disadvantages and risks faced by women, Aboriginal and Torres Strait Islander peoples and those from culturally and linguistically diverse backgrounds in aged care.

The Greens also said the announcement fell “glaringly short of addressing the broader violence, abuse and neglect of people in institutional and residential care settings, including disabled people”.

Greens spokesperson on Ageing Senator Rachel Siewert warned the Royal Commission should not be a repeat of what happened with the Royal Commission into the Protection and Detention of Children in the Northern Territory, ordered by former Prime Minister Malcolm Turnbull following shocking images on Four Corners from the Don Dale facility.

“Terrible images are broadcast, the Government were pressured into finally having to do something, they call a Royal Commission and then once it’s over, won’t commit to implementing the recommendations,” Siewert said.

The Australian Medical Association (AMA) welcomed the announcement, saying it had been voicing serious concerns for many years about the care being given to older Australians and predicted the Royal Commission will uncover “uncomfortable and distressing stories, and systemic failures”.

The AMA said its most recent Aged Care Survey found that one in three doctors plan to cut back on or completely end their visits to patients in residential aged care facilities over the next two years and that there are not enough suitably trained and experienced nurses in aged care. It said:

There must be proper planning to ensure that medical, nursing, and other specialised care are built into the design and operation of aged care facilities.

The AMA hopes that the Royal Commission will give victims a voice, and lead to real reform of a sector that has been woefully neglected for decades.”

The Council of the Ageing (COTA) Australia also welcomed the spotlight the Royal Commission will throw on the challenges facing aged care over the next two decades, but warned “it must not delay significant reforms underway and in the wings” to improve safety and quality standards following a string of inquiries into the sector over recent years.

COTA CEO Ian Yates said he welcomed the Prime Minister’s comment that the Royal Commission “will be in addition to, not instead of, the actions we are taking”, and will seek urgent clarification on the detail. He said:

“Key recommendations in the Tune Review regarding funding of aged care have not yet been endorsed by government and need to be part of the Royal Commission’s focus, but also need parallel action by government – for example to reduce the huge waiting times for Home Care Packages which leave people at risk in the community without support.”

“We know now that these changes need to happen, and the government should get on with them while the Royal Commission does its work to prepare for the future.”

“We want to see the terms of reference require the Royal Commission to investigate whether Government is funding aged care appropriately to ensure consumers are getting the right levels and choice of care, in particular in remote and regional areas where older Australians often have little access or choice in aged care services.”

Continuing its campaign, the Australian Nursing and Midwifery Federation (ANMF) said a Royal Commission will do nothing to fix the crisis in aged care unless mandated staffing ratios are introduced in residential nursing homes as a matter of urgency.

ANMF Federal Secretary Annie Butler said current research demonstrates the gaps in care for our elderly in nursing homes – on average nursing home residents are receiving only 2 hours 50 minutes of care per day, well below the 4 hours 18 minutes they should be getting. She said:

This is because there is no evidence based minimum staffing standard for nursing homes and no national laws to guarantee appropriate ratios of qualified nursing staff and aged care workers. Too often there may be only one registered nurse manage the care for over 100 nursing home residents, or only one carer to feed, bathe, dress and mobilise 16 residents in less than an hour.”

Butler said it was no coincidence that there had been a 400 per cent increase over the past 13 years in  preventable deaths in nursing homes.

“While the current aged care crisis clearly warrants a Royal Commission, we know what the problems are. We have two decades’ of reports and inquiries outlining the problems. It’s time to take action. Let’s start by introducing a safe staffing law.”

LASA CEO Sean Rooney highlighted funding issues, saying there is “currently a mismatch between the needs and expectations of older Australians and the wider community, and the services that aged care providers are funded to deliver”. He said:

Independent analysis by StewartBrown estimates that 43 per cent of Australia’s residential aged care facilities in 2018 are operating at a loss. This situation is even more dire in regional and rural areas where three in every five facilities are in the red. “

Rooney said there are also around 110,000 older Australians waiting in the national queue for home care services.

“Many of the solutions to realise these outcomes are already on the table. Whilst the Royal Commission is underway we must press on with addressing key workforce and funding issues, and not lose sight of making the system better right now.

Call to put financial abuse on the agenda

Maurice Blackburn Lawyers called for elder financial abuse across a range of aged care settings to also be scrutinised as part of the Royal Commission’s investigations, inquiry.

Its National Head of Wills and Estates Law Andrew Simpson said people impacted by elder financial abuse are often embarrassed or afraid to speak out or unable to when the abuse is perpetrated by someone they are reliant on, such as a relative or friend.

Simpson said for many victims it was “virtually impossible” to navigate and negotiate services to help with financial abuse, while many professionals such as bank tellers and medical professionals see instances of elder abuse but they have nowhere to go as a first port of call to report it. He said:

For some time now we have called for safeguarding laws in all states and the need for a dedicated agency that can receive complaints of elder financial abuse to help to put those impacted in touch with services that can do something about this or further escalate concerns as needed.”

Adele Ferguson: Royal commission will finally give the elderly a voice

Braemar Aged Care CEO Wayne Belcher: What to do with a Royal Commission? 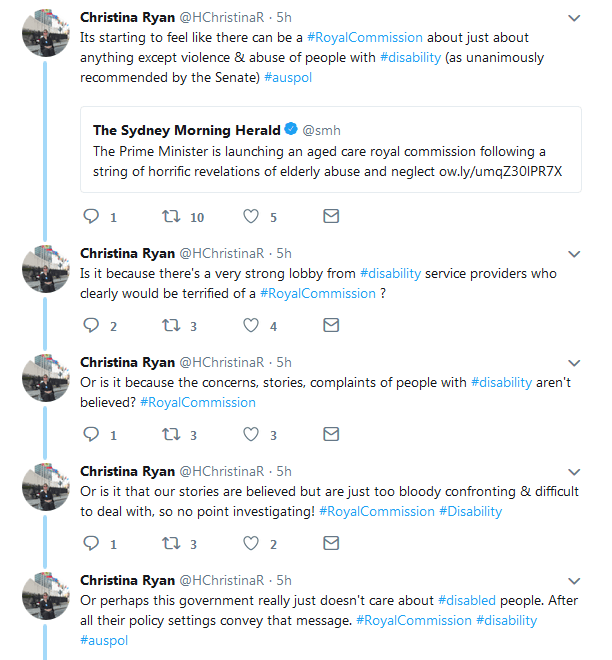 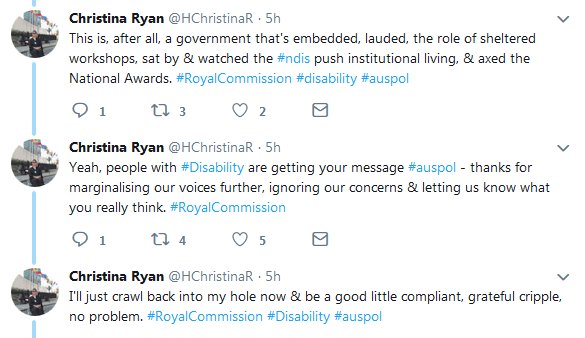