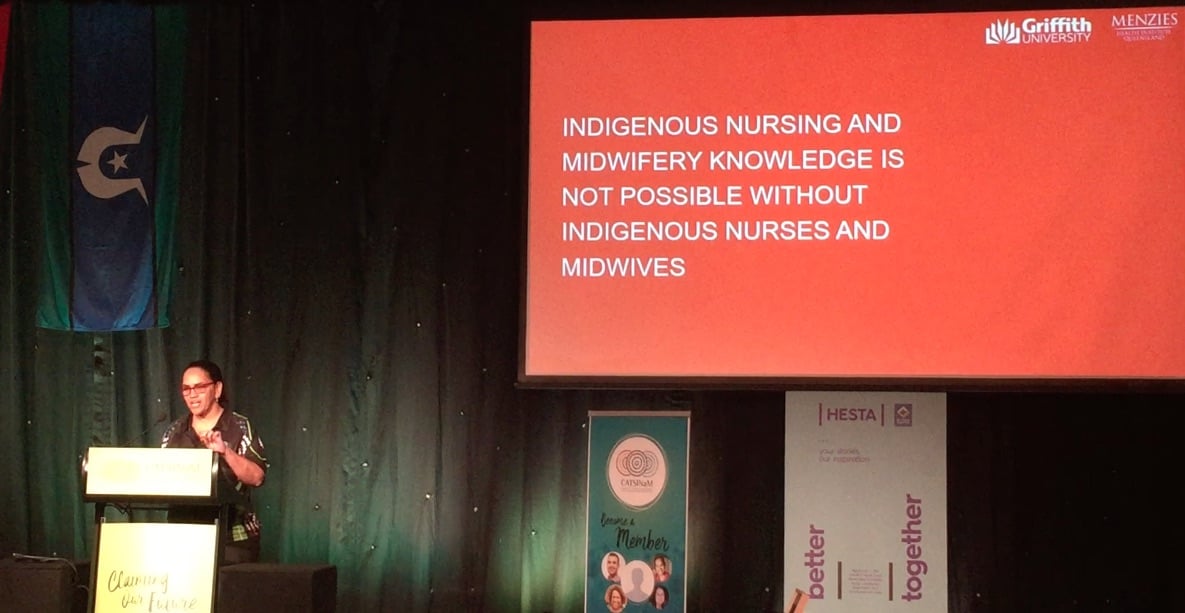 Sharing the learnings of a formidable agent for change

It is never easy to achieve change in big, resistant bureaucratic organisations driven by competing interests and agendas. But Professor Roianne West has shown it IS possible.

Since being appointed as Foundation Professor of First Peoples Health at Griffith University on Queensland’s Gold Coast in 2015, West has been embarked on a massive system change agenda to boost the quality of education in Indigenous health and, ultimately, the numbers of Indigenous staff and students.

While the journey is far from over, West shared some of her lessons and stories of success at the recent Congress of Aboriginal and Torres Strait Islander Nurses and Midwives (CATSINaM) conference, held on Yugambeh country on the Gold Coast.

West told delegates that she arrived in the large faculty – with eight schools, about 12,500 students and just under 1,000 staff – to discover the teaching of Indigenous health was “less than optimal”.

In her initial weeks, she was landed with students’ complaints about the discrete Indigenous health course, which was largely taught by sessional staff, had poor engagement from the various schools and programs, and was offered anywhere from 1st, 2nd, 3rd and 4th year of the various programs.

“So how do you teach a consistent course if it’s positioned inconsistently across four years?” West said.

All these factors meant it was very difficult to ensure and maintain quality in the course, she said.

“The course was in complete disarray,” West told the conference. “This course had little chance of succeeding; with little hope of a positive student experience nor positive staff experience delivering the course.”

West saw an opportunity to rewrite and redesign the course so that it was consistent with the new national Aboriginal and Torres Strait Islander health curriculum framework (West had represented CATSINaM on the consultation phase of the framework’s development by Curtin University, engaged by Health Workforce Australia).

“They said, ‘you can’t do that, Roianne, because it takes about a year to re-write and re-design a course’,” she recalled. “We did it in eight weeks – they didn’t know me!”

West, who is from the Kalkadoon people of far north-west Queensland, is the daughter of a life-long health worker and advocate, and comes from a long line of healers, with four generations of nursing in her family. 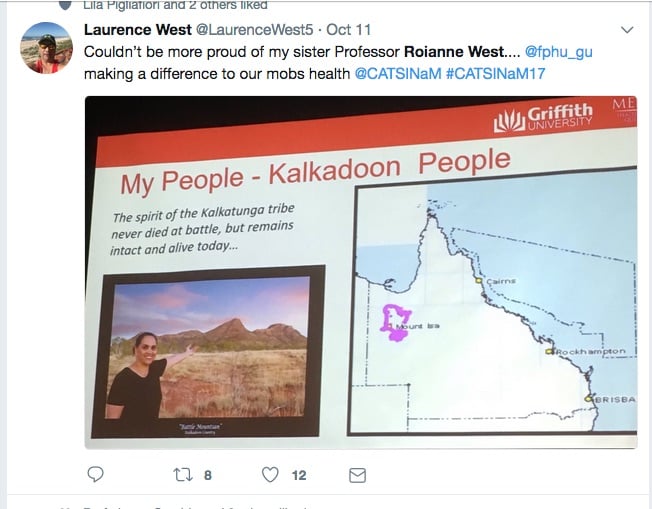 In redesigning the course, West and her team centred the importance of the experience for Indigenous and non-Indigenous students, as well as the teaching team, to ensure they “were safe in the learning and teaching environments”.

“Central was ensuring that what we were teaching had applicability to practice and ultimately acquired culturally safe students towards improved Indigenous health outcomes following graduation,” she said.

Good Indigenous health curriculum design was also important for improving retention of Indigenous students and staff, given research showing they often leave universities because of negative experiences in the sector due to racism.

Other strategies included reducing the number of sessional staff, ensuring the course adhered to the university quality improvement processes, and introducing an 80 credit course prerequisite, so that students already have some knowledge when they come to the course about major capabilities taught in the course such as respect, safety, leadership, reflection and advocacy.

West said: “… our job is to teach them how to apply these concepts and unpack the process that occurs that often paralyses non-Indigenous health professionals from applying them in Indigenous health contexts.”

West also identified a need to provide leadership in developing a systematic, integrated approach across the faculty to improve the quality of wider teaching about Indigenous health, which was also taught within 276 courses and within frameworks. 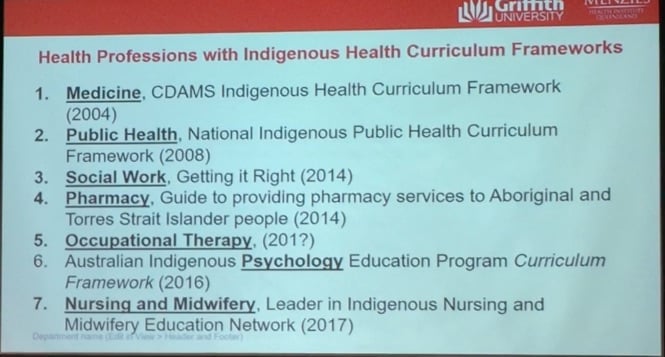 West saw a lack of confidence among some non-Indigenous academics about teaching Indigenous health, because of concerns they might offend Indigenous people. “That was concerning,” she said, “given that as health academics they should be able to teach any content to some degree.”

More broadly, the lack of knowledge about cultural safety and Indigenous health among academics was a critical barrier, she said.

“We have a situation now where we have got academics who weren’t privy to Indigenous health education or anything to do with Indigenous peoples that are now doing some of the curriculum work,” she said.

“So we have got students who are going to be more culturally capable than some of the academics in the university.

“If I thought the discrete course was a hard piece of work, the integration work is going to be more challenging.”

“So we want to be able to meet the need of industry as well and to work with our industry partners in the peak organisations to be able to do that,” she said.

Reflecting upon her journey of institutional reform, West said that key to achieving change has been developing relationships, internally and externally, and at local and national levels, as well as across mainstream and Indigenous health services – working with the system, rather than against it.

Working in this complex environment, it was important to “speak the language” of the various stakeholders.

“You need to identify what your levers are and what is the language that is going to get you the most influence,” she said.

“If I was to go and say, ‘this is very important to do because you have got a social responsibility’, that often doesn’t work.” 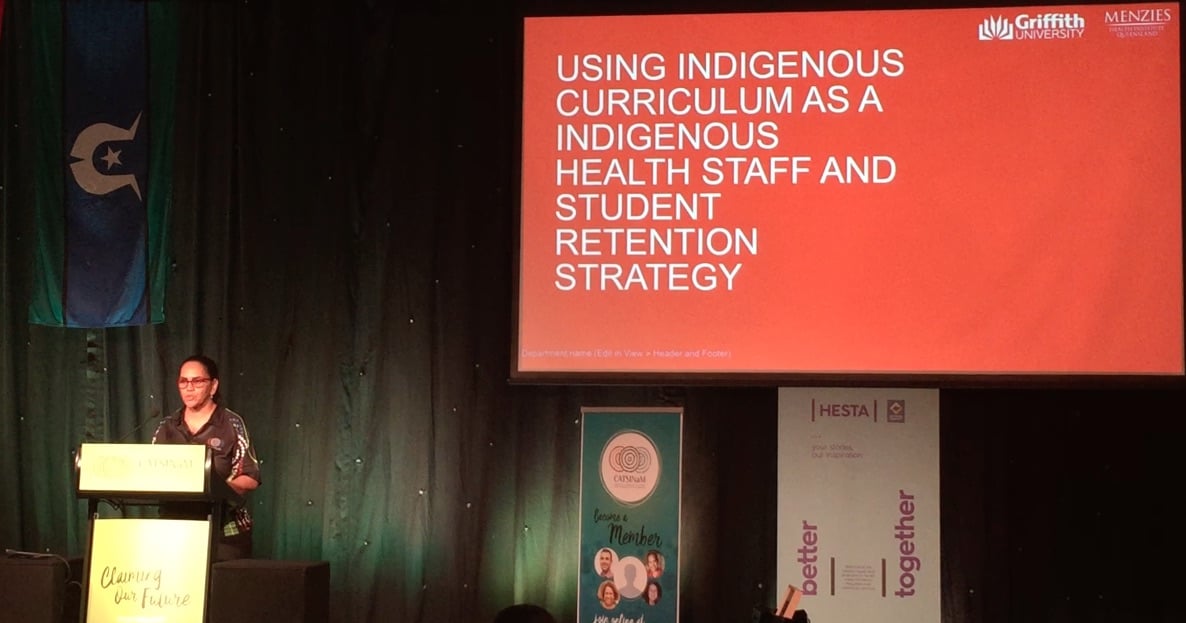 Another key reflection from her reform journey is that much of her work has been directed at improving the cultural capability of non-Indigenous people.

While this is important, she said it should not detract from the important work of self-determination and building the capacity of Indigenous students and staff and community.

Going forward, her focus will be on developing an Indigenous curriculum as an Indigenous staff and student retention strategy, aligned with the emancipatory objectives espoused by Professor Lester Rigney and others.

In particular, increased numbers of Indigenous health professionals were needed in acute care, aged care, critical care and emergency care, and mental health – all areas where Indigenous people are over-represented.

“It’s like having a women’s hospital and having it 97 percent men – and then we’ve got to spend all of our resources teaching men how to work with women. Is that a good investment? … you would never hear of it.”

Where this journey began

In many ways, this focus on increasing workforce numbers is back to the future for West, whose journey as an agent of systemic change began in 2004 when working as a mental health nurse in a secure forensic unit, where Indigenous men occupied 30 of the 32 beds.

She saw the men were suffering misdiagnosis and over-medication because non-Indigenous staff were not interpreting their symptoms accurately nor understanding the cultural context in which the symptoms were located.

This led her to investigate ways of increasing the number of Indigenous mental health nurses – which led her to the need to increase the wider Indigenous nursing workforce. 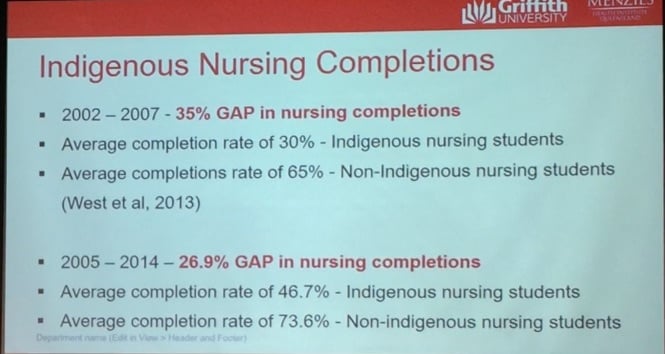 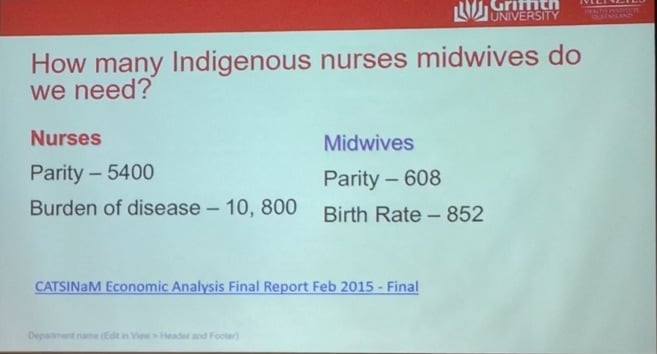 West says there is also a personal imperative to urgently increase the Indigenous health workforce.

“As an Indigenous health leader, you take grace in the fact there are people coming behind you, so you know at some point soon you will get to hand over the baton,” she says.

“At the moment, if we have only got relatively small numbers trickling through, you know that you’ve got to hold quite a heavy load for a much longer time.” 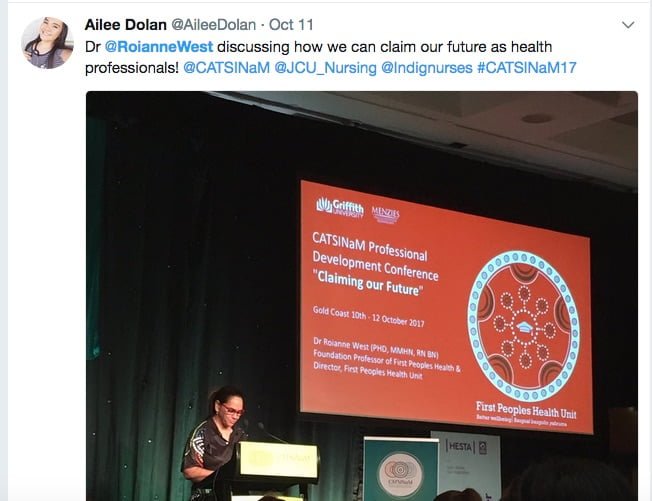 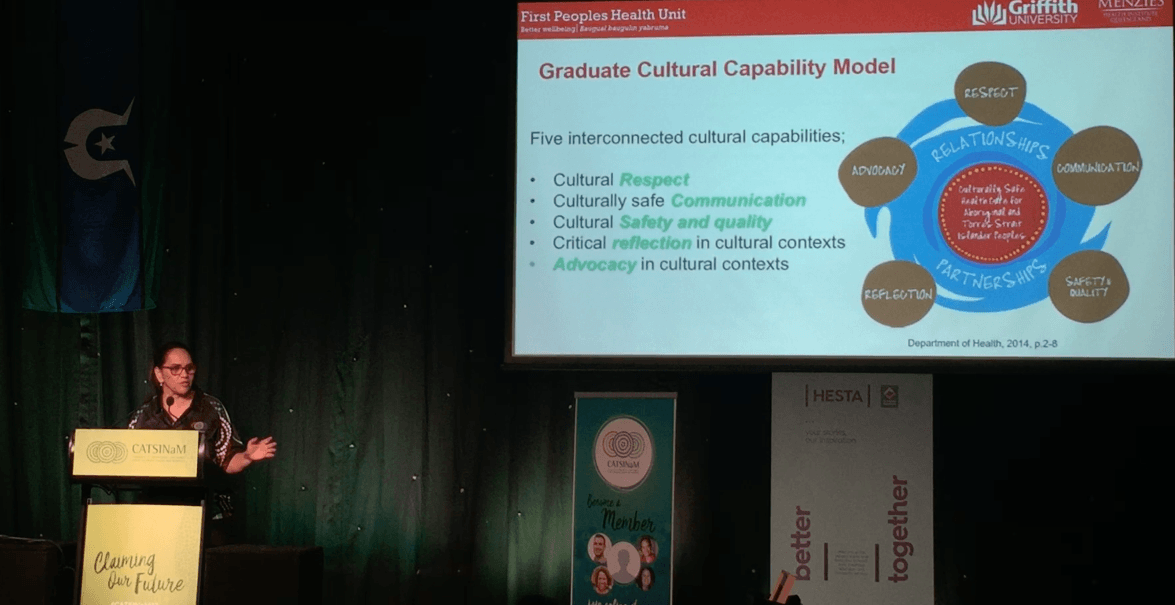 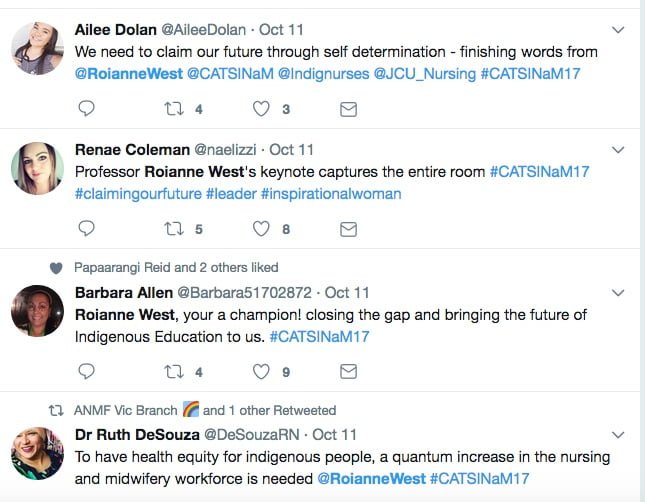 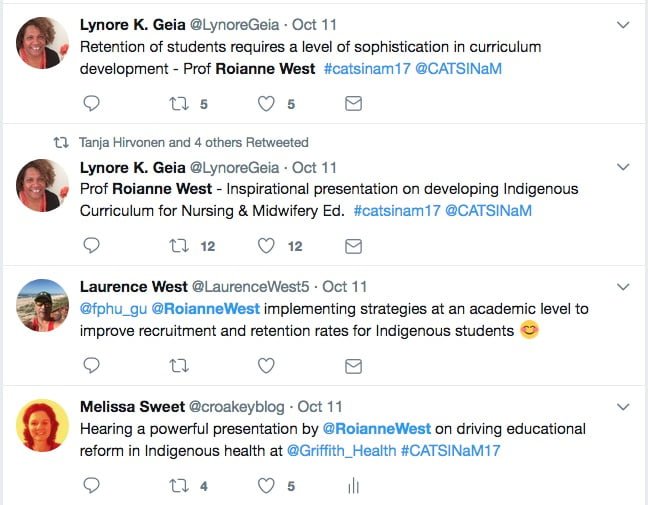 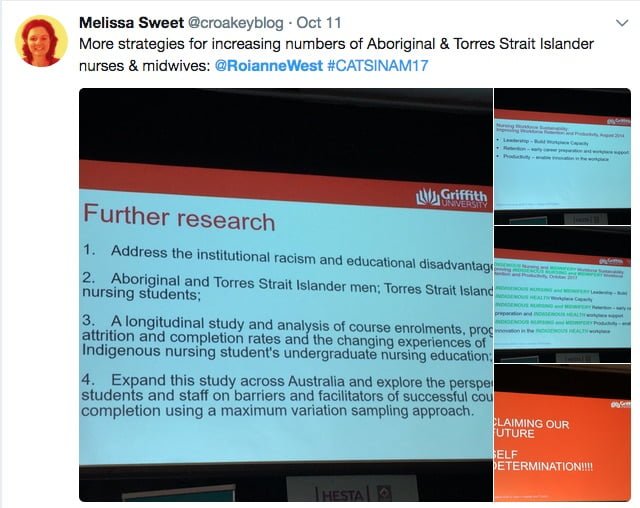 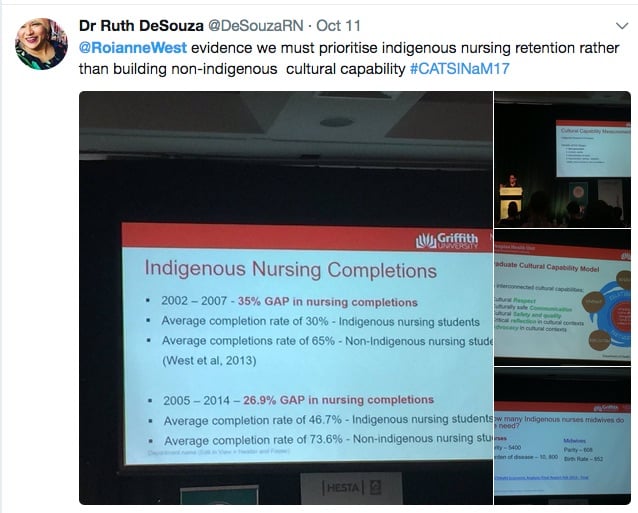 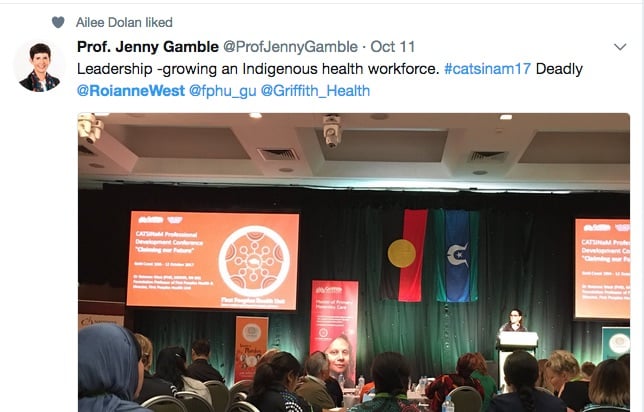 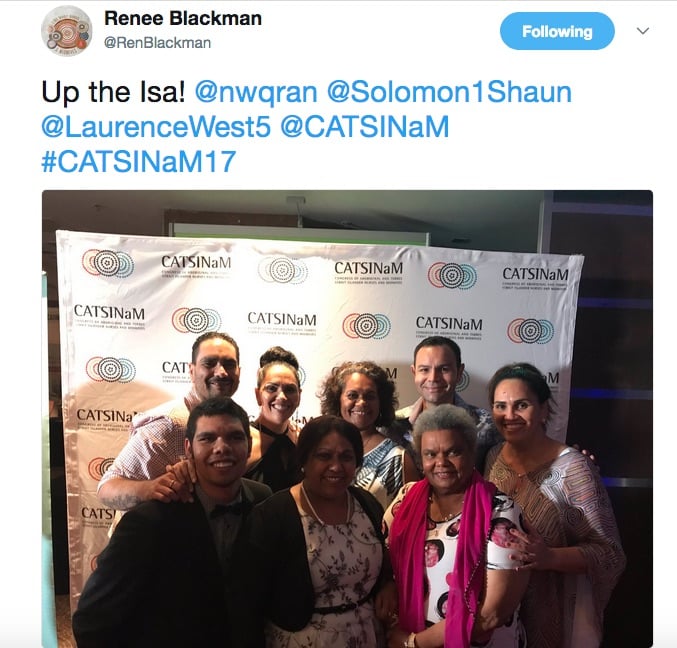 Bookmark this link to follow our ongoing coverage of #CATSINaM17 at Croakey.