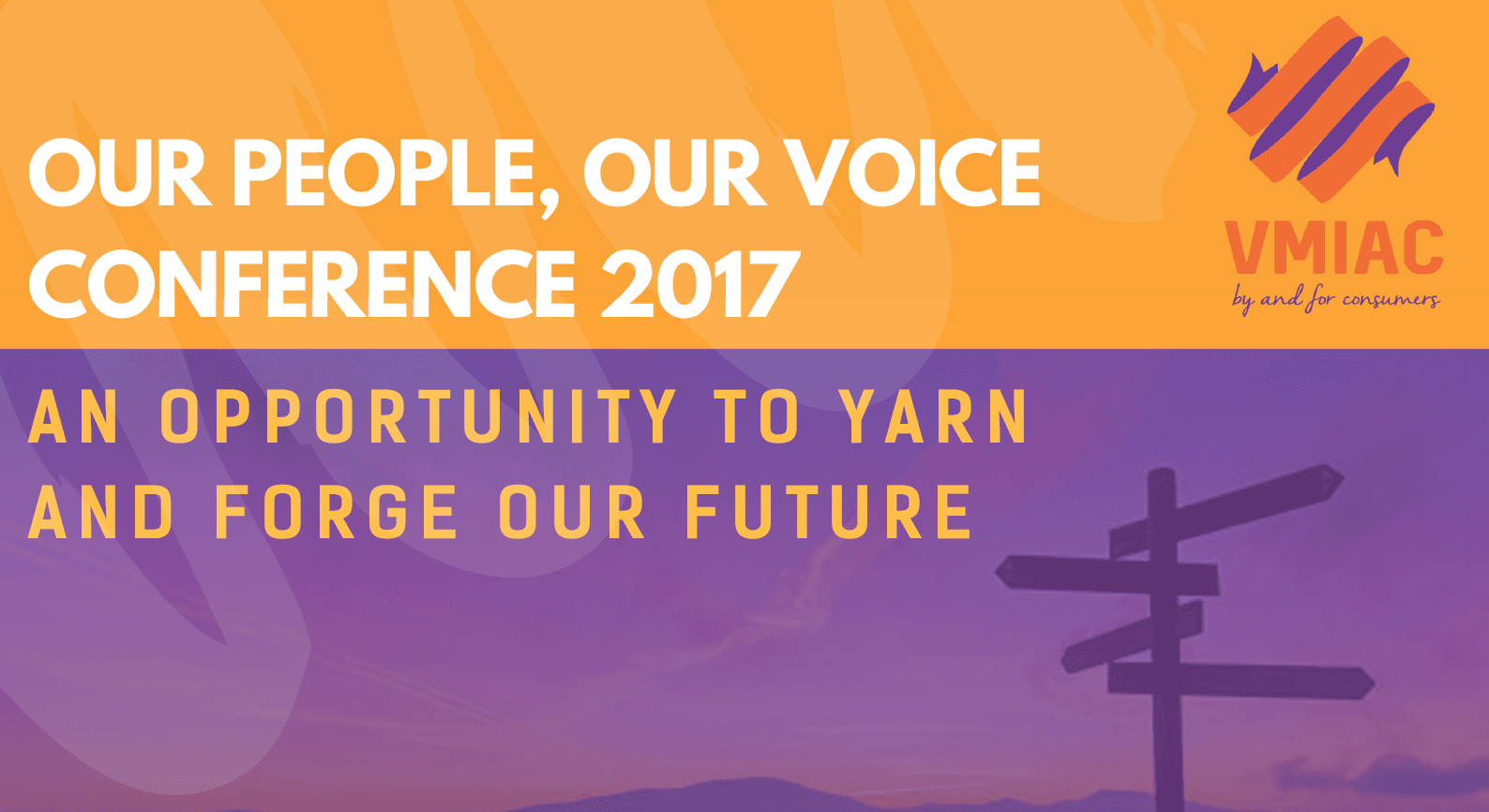 Making sure that mental health consumers have a voice in their own care, in services and the broader workforce, and in big policy directions like the National Disability Insurance Scheme (NDIS) will be the focus of a conference in Melbourne this week.

The two-day Victorian Mental Health Awareness Council (VMIAC) conference will put lived experience at the core and showcase leadership and innovation from consumers and the consumer workforce and the importance of co-design and co-production.

It comes amid major developments for the consumer mental health workforce in Victoria and with the NDIS, as well as concerns about a lack of consumer focus in the Fifth National Mental Health and Suicide Prevention Plan, released earlier this month.

Policy experts were also disappointed there was barely a mention of mental health in the Productivity Commission’s recent landmark report, Shifting the Dial: 5 year productivity review, on priorities to enhance national welfare.

The theme for the VMIAC conference, to be held on November 1-2, is: Our People, Our Voice: an opportunity to yarn and forge our future.

It’s one that resonates personally for VMIAC CEO Maggie Toko, who lost and found her own voice during a traumatic childhood and adolescence, growing up in Aotearoa/New Zealand, dealing with disability, racism and grief, and through her own diagnosis of schizophrenia.

Croakey thanks her for permission to publish an edited version of a speech she gave soon after taking up the role at VMIAC in 2016, about her experiences growing up and what having a voice and choice means.

Journalist Marie McInerney is covering the VMIAC event for the Croakey Conference News Service – so make sure to follow on Twitter at #VMIACConf17 and @mariemcinerney.

Also follow @WePublicHealth where VMIAC will be guest-tweeting this week.

Keynote speakers at the conference include Victorian researcher and tertiary educator Cath Roper, who won the lifetime achievement award at the inaugural VMIAC 2016 Consumer Awards, and Fay Jackson, Deputy Commission with the New South Wales Mental Health Commission and general manager of inclusion at Flourish Australia.

I know firsthand what it feels like not to have a voice.

I was born with a severe stammer. School was a nightmare for me, having to read out loud in class, I would count in my mind how many people were before me, I would get so anxious that by the time it got to me, I would have ripped the book, picked up the desk and thrown it across the room. Needless to say, I was forever in trouble. Had I been an adolescent today, I probably would have been diagnosed with oppositional defiance disorder.

I learnt embarrassment at a young age, I learnt what it was like to have my peers laugh at me, to have adults berate me, the classic line “speak slower, spit it out”.

Two profound things happened to me when I was a child, the first was I learnt to be silent. I did silence really well. I didn’t get embarrassed anymore and neither did anyone else. I gave up speaking at six years old. Most of the adults in my life just accepted that I didn’t speak.

This, however, brought different dilemmas. Being silent in society is unacceptable. If someone asks you a question, you are expected to answer it, if you don’t then you are considered to be hiding something, or you’re labeled stupid, rude, dumb.

If you can imagine, my childhood and adolescence were dark days. I had teachers say to me “If it wasn’t for the law, I would tell you to not bother coming here” and “you’ll never amount to much, I don’t know why we bother”.

The second profound thing that happened when I was young was that I heard a man call my mother a nigger. I watched her embarrassment, and his anger, it frustrated me because I couldn’t speak to defend her. That frustration would never leave me.

Those dark days would grow even darker when my mother died, when I was 12. My father had already died when I was a year old so this made my younger sister and I ‘wards of the state’.

For all those teachers saying I was dumb and stupid, I read profusely. Libraries were my friend, they were places of silence as there was no expectation for you to talk to anyone. I read books on civil rights, Dr Martin Luther King, the Black Panther movement.

I remember seeing the two athletes raise their fists in protest at the Olympics, watched them be stripped of their medals. I read about Dr King riding the freedom buses and wished that could have been me. I read that they believed in taking back freedom, not waiting for it to come to them.

Aotearoa had its own civil rights actions happening at the time. It resulted in a land march walk from one end of the island to the other, led by some of our elders. I joined the march when it came through our town, I had my first sense of what it meant to be proud to be a Maori. I spent less time at school, and more time hanging out on the street, it is where I met and started hanging out with a gang.

They were the first people to speak to me properly. I literally couldn’t string two words together when communicating with them. It didn’t matter, they listened until I was finished. Their response was “that must be one bad buzz for you sis”.

All of a sudden I had people who got me. People who didn’t care how I sounded, people who encouraged me to swear. Through swearing I was able to link my words together, I could say whole sentences without stuttering. For the first time in my life I was encouraged to believe that I just might do something. It took six months of being with the gang to find my voice, to recognise that outside of the books I had been reading, I had choice in my life.

I believe that choice is a hard thing to define. At that developmental stage where I learnt that I had a choice, I decided that I could accept everything that adults had told me over the years or I could make my own path, I decided to do just that – make my own path. I call it rowing my own waka or canoe.

Those earlier years would shape my passion for working with people, young people and mental health in particular. I don’t share my story much, I never wanted it to be a burden on anyone else. At the same time I made a decision not to hide it either.

I have worked with young people who have the most tragic stories but through all adversity they survive. They are encouraged to speak out, to empower themselves by dominating the space they consume, to stand proud about who they are.

Power to the universal voice, I say! Your voice matters – silence is NOT golden when it is used to suppress people. Freedom to express yourself in a way that is user friendly, in a way that achieves your goals, in a way that empowers you is paramount to having choice. The right to choose which path you want to take, without coercion should be yours to make. Imagine what the world would be like if people focused on positive choices only.

Choice brings with it responsibility – that we make choices that are not harmful to ourselves or others, that we utilise decision making consensus. If it doesn’t feel like the right choice, then use our voice to question more.

Collectively, we as a community need to do that. Too often, communities think that they are destined to accept the status quo of what society thinks – this is not so, the fact that we have lived experience consumers in the workforce is an example of that. Our collective voice is not about standing alone, it is about standing together, it is about sharing our stories, sharing our collective vision.