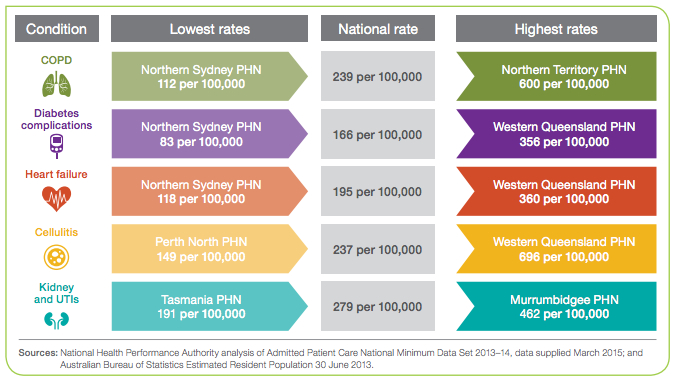 Rates of potentially preventable hospitalisations are nine times higher in some local areas and can triple depending on the PHN, new data from the National Health Performance Authority showed Thursday.

The NHPA report covers 22 conditions considered potentially preventable which it said accounted for 6% of total hospital admissions in 2013-14 and 8% of all hospital bed days.

But the report showed significant variation depending on SA3 local area and PHN, with rates three times higher in the Northern Territory PHN vs Northern Sydney PHN, and nine times higher in Barkly, NT vs Pennant Hills-Epping in Sydney.

Older people, those of a lower socioeconomic status and living in regional and remote areas have higher rates, due to both poorer general health and access issues, the NHPA said.

Just 5 conditions accounted for almost half the 600,000+ preventable hospitalisations and almost two-thirds of bed days for these admissions:

There are big differences in rates of potentially preventable #hospitalisations even across similar communities pic.twitter.com/tsUL4NO7B1

Rates of potentially preventable #hospitalisations for COPD could be 5x higher in one #PHN area compared to others pic.twitter.com/7BkcSmLxjH — NHPA (@NHPAreporting) December 9, 2015

Depending on where they lived, the NHPA said people from metropolitan areas were twice as likely to have a potentially preventable hospitalisation, while in remote areas, this disparity could be as high as fivefold.

Between 2011 and 2013 the NHPA said potentially preventable hospitalisations for Aboriginal and Torres Strait Islander people were three times higher overall and:

The Australian Healthcare and Hospitals Association said the figures underscored the importance of primary care.

These figures show both the importance of primary care in easing the burden on our hospital system, and the opportunity for Primary Health Networks to identify and respond to regional need by commissioning well-targeted health services.

Better care coordination at a regional level, supported by appropriate funding mechanisms and greater patient engagement, could assist in managing chronic conditions such as heart failure and diabetes, and lowering the rate of potentially preventable hospitalisations in Australia.

As Governments engage in discussion about raising more revenue through the GST or Medicare Levy, this report serves as a reminder there are improvements that can be made in the health system that would result in savings. The Commonwealth and the states and territories must work actively together to ensure funds are targeted at areas of demonstrated need in the health system.