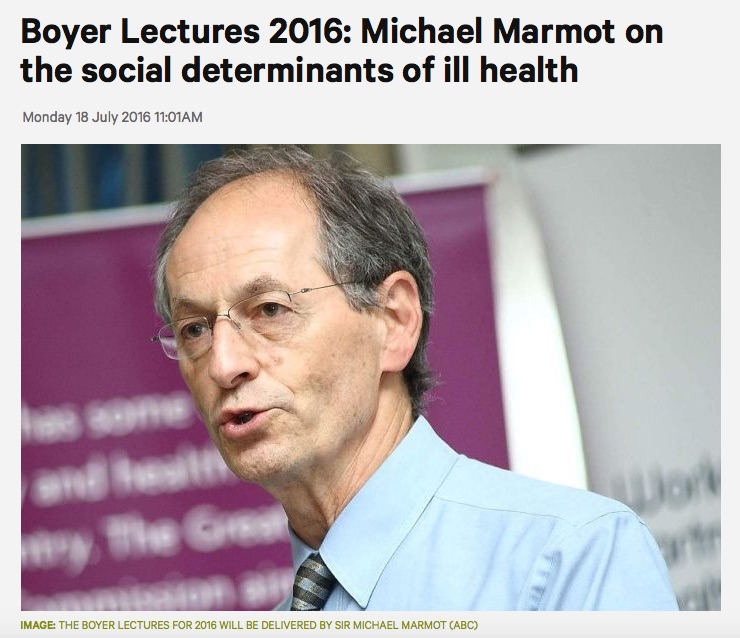 Since 1959, the ABC’s Boyer lectures “have stimulated thought, discussion and debate in Australia on a wide range of subjects” (ranging from “Society in the Space Age” in 1959, to Sir Macfarlane Burnet’s lecture on “Biology and the Appreciation of Life” in 1966, and Dr Graeme Clark of cochlear implant fame on “Restoring the Senses” in 2007).

With news breaking today that Sir Michael Marmot  – a leading global advocate for action on the social determinants of health and health inequalities – will deliver the 57th Boyer Lectures Series later this year, Croakey wonders what impact this might have upon the dominant debates around health and policy?

And how will the public health and wider health and civil society networks capitalise on this potential opportunity for healthier public debate and policy?

We look forward to hearing more about this, in the lead up to the first 2016 Boyer Lecture to be delivered in Sydney on 1 September, and broadcast on ABC RN over four consecutive Saturdays. These lectures “will explore the challenges faced by nations and communities in reducing health inequality”.

In a statement released today by ABC Corporate Affairs, ABC Chairman James Spigelman AC said Sir Michael was a fitting choice for this year’s lecture series given the struggle in different societies to deal with rising inequality and create the conditions for everyone to have the same good level of health as those at the top.

Marmot – follow him on Twitter at @michaelmarmot – is President of the World Medical Association, Director of the UCL Institute of Health Equity and has been a leading researcher on health inequality issues for more than four decades.

Sir Michael started his career in Sydney and has gone on to make a very valuable contribution to health research, work that has benefited many people and informed policy debates including for Australia’s Indigenous communities.

As with other countries, Australia is faced with a changing range of health issues as people live longer and with greater expectations.

Sir Michael’s lectures will provide valuable insight into how policy in all-important social areas may influence health and well-being. Drawing on research globally his insights have the possibility to ensure better outcomes for everyone.”

Sir Michael said his key insight is that health is not simply a matter of lifestyle or access to health care but is related to inequality of economic and social conditions that affect all of us. He said: “The key to reducing this health inequality is empowerment; to create the conditions for people to have control over their lives.”

Read on for other recent news and developments in the the social determinants of health and related fields.

In the UK, the Health Foundation and the All-Party Parliamentary Health Group have jointly published a collection of essays setting out current and emerging threats to health and wellbeing and what is known about what works to address them: A healthier life for all: the case for cross-government action. 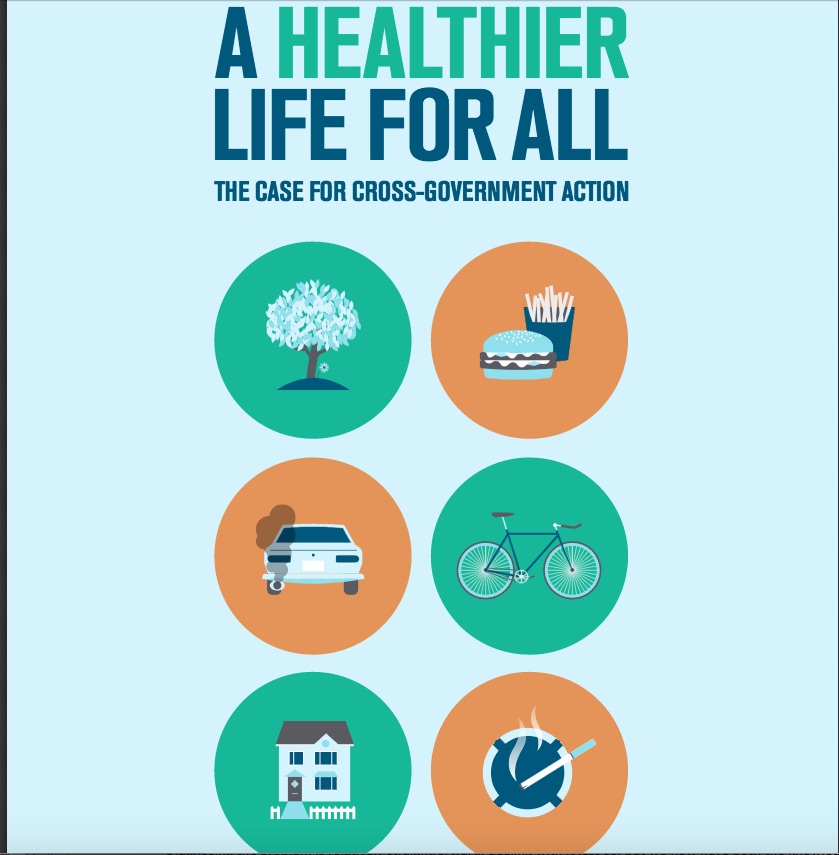 The publication calls on the government to tackle the drivers of poor health by making health improvement an objective in all policy areas, and concludes that addressing the wider determinants of health is critical to ensuring the prosperity and wellbeing of British society as well as easing pressure on the NHS.

The essays support the view that a more proactive approach to tackling poor health across all policy areas is urgently needed, to help ensure individuals, families and communities can thrive.

It says the public and politicians need to understand health as “an emergent property of our life chances and environment, rather than as an output of the NHS”, and “as contributing to the core infrastructure of a prosperous and sustainable society, rather than something we can ‘afford’ when the economy is thriving”.

It also urges that spending on health be seen as an investment, and that maintaining and improving health is viewed as a priority across government and is not just the domain of the Department of Health (not that this will come as news for regular Croakey readers).

Remarkably, the collection includes very little focus on climate change, save for a few brief mentions.

Nonetheless, many of the themes will resonate in Australia, for example, this essay title: “Harm from Alcohol: The solutions are there but not the will to implement them”.

Another new paper from the UK that also resonates in the Australian context explores the merits of introducing a universal basic income (UBI) scheme – which would pay a tax-free, unconditional and non-contributory basic weekly income to every individual as of right, irrespective of how much they earned or their work status.

It would aim to replace at least part of the existing social security system and would involve a profound revolution in the way income support is organised.

The analysis has been commissioned by Compass and funded by the Joseph Rowntree Foundation.

It says a UBI “is a profoundly democratic and egalitarian concept that promotes both security and genuinely effective freedom” and that it would “overcome many of the problems with the existing and increasingly complex, punitive and unpopular system of social security, which in multiple ways has become a weak tool for social protection but a strong tool for waste and the humiliation of those on the very lowest incomes.”

“A UBI would provide a much more secure income base in an age of deepening economic and social insecurity and unpredictable work patterns. It would offer much greater financial independence and freedom of choice for individuals between work and leisure, education and caring while recognizing the huge value of unpaid and voluntary work.

Central to the case for a UBI is the way it would help prepare us for a world in which the new technological revolution, driven by artificial intelligence and robotics, will, over time, transform the nature of work and the type and number of jobs. A UBI offers a powerful way of protecting all citizens from the great winds of change to be ushered in by the fourth industrial age, and of sharing the potentially massive productivity gains that it will bring.”

The first 1000 days is the name of a global movement that recognises the importance of the period between conception and a child’s second birthday as a unique window of opportunity to shape healthier futures (read more about it in this previous Croakey LongRead by Professor Kerry Arabena.

At the University of Melbourne, Onemda and the Melbourne School of Global and Population Health are offering a two-day Master Class in this approach. These courses are coming up soon: 21 and 22 July; and 29 and 30 September 2016.

The blurb about the course says it:

will present the overall objectives of the Australian Model of the First 1000 Days, which aims to provide a coordinated, comprehensive intervention addressing the needs of Aboriginal and Torres Strait Islander children from (pre)conception to two years of age, thereby laying the foundation for their future health and wellbeing.

Through a mix of presentations, group work and case studies, the course will explore how the Model can be established and implemented across different Aboriginal and Torres Strait Islander communities Australia-wide in partnership with the University of Melbourne and Aboriginal Community Controlled Health Organisations.”

Perhaps we will hear a Boyer Lecture Series on this topic in coming years?? 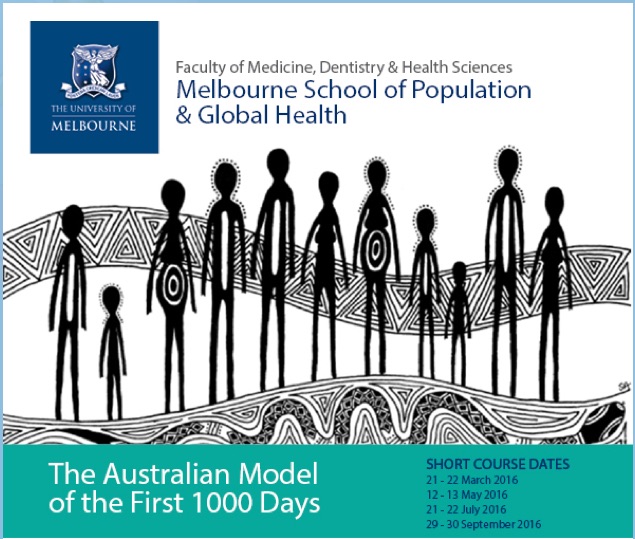