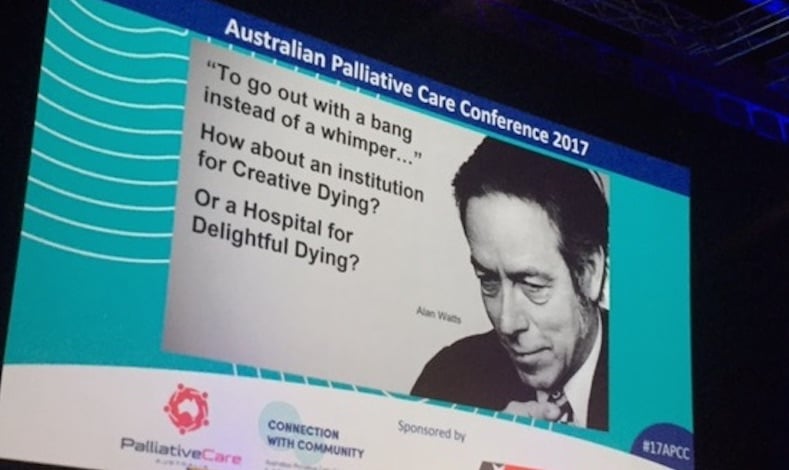 Challenging the paradigm of palliative care...

Some big questions about life and death: challenging “conveyer belt” of Western medicine and wishing for a loving end

Should “bad deaths”, where people suffer unnecessary pain and distress or needless and harmful medical interventions, be pursued in the courts as violations of human rights?

Is palliative care failing its mission if it doesn’t go far beyond supporting those dying in our hospitals, homes and hospices to challenge the staggering number of deaths caused by hunger, environmental injustice, and female infanticide?

Does humanity itself need palliative care in an era where the planet’s health is in crisis?

And when we talk about ‘good deaths’, what do we mean?

These were some of the challenges put to the Australian Palliative Care Conference in Adelaide this week, in a powerful and provocative keynote address by Dr Alex Jadad, Professor at the Institute for Global Health Equity and Innovation at the University of Toronto.

The Colombian-born physician and educator had already made a splash at an earlier conference event, describing in glorious and gory detail how last month he helped his 25-year-old daughter give birth – “unexpectedly with bare hands” – in the corridor of a building.

He despaired at the “over-medicalisation of everything” that has led to an 80 percent Caesarean rate in the Colombian region where his daughter lives and helped breed a “myth of immortality” in Western nations that are losing community connections, separating body from soul, and fearful of death.

“If we brought someone here from 100 years ago, they would say ‘What have you done to yourselves!” he said. “I think we need to be embarrassed.”

As he roamed the stage for an hour during his keynote, inviting questions, comment and coaching from the floor, Jadad did a quick poll.

Raise your hand, he invited the 800 delegates in the convention hall, if you would like to die as your patients are now.

The result echoed a conference discussion on Wednesday led by Ken Hillman, Professor of Intensive Care at Liverpool Hospital in Sydney, who has recently published a book, ‘A Good Life to the End’, on taking control of our inevitable journey through ageing and death.

Hillman despaired of a “conveyer belt” that is pouring frail, elderly people with multiple problems into intensive care units in the last few weeks of their lives, where they are more likely to be over-treated and face death without dignity.

“Hardly a ward round goes by that one of our team doesn’t say ‘please don’t let this happen to me’, so it’s extraordinary that we’re doing it to other people,” Hillman said.

He quoted leading US geriatrician James Goodwin, who said:

In his keynote, Jadad proposed that “a bad death be considered a violation of human rights”.

While he didn’t expect health professionals to march governments off to court or The Hague, he said they should consider whether they should rightly sue governments for continuing poor treatment of people in the final hours or days of their lives.

Around the world, he said, about 80 percent of people are dying in institutions like hospitals and aged care facilities when the same number would like to die at home.

A “huge proportion” are dying unnecessarily in pain in countries like Canada and Australia, where vets get three times the training on pain management than doctors or nurses, or elsewhere where government regulations make it difficult to access painkillers. He said:

I’m not saying we should do it (go to court) but I’m wondering, because I think we are too nice and we have become accomplices most of the time.

We keep witnessing bad deaths, (and we blame) ‘the system’, ‘the government’, ‘the perverse incentives under which I operate’….

What happens if we start thinking in those (human rights violations) terms instead of how I’m going to deal with this case in front of me, or the community that I have committed to support.”

Broaden the discussions about death

Just as powerful was Jadad’s challenge to the health and palliative care sector to think more globally about its concept of a ‘bad death’.

He showed a slide with the World Health Organisation’s list of the top ten causes of death of the 56 million people who died worldwide in 2015, led by heart disease, stroke, and lower respiratory conditions, describing it as “one of the greatest expressions of medicalisation of death. We die with a label given by medicine.” 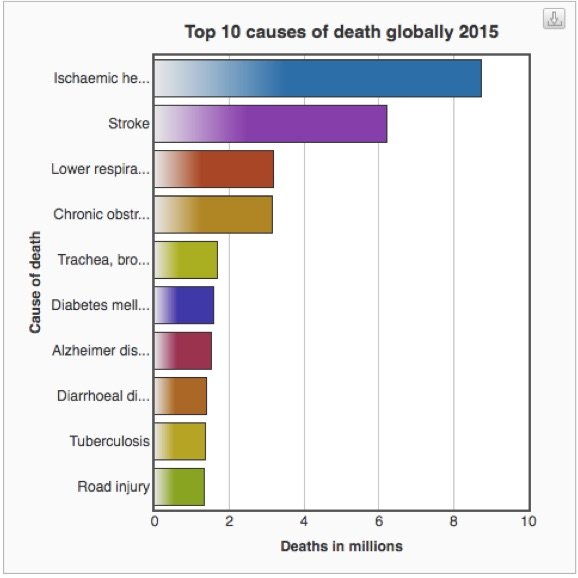 What would happen, he asked, if we looked through a different lens, and looked at other data sets about death?

Nearly 13 million are linked to the environment, through air, water and soil pollution, chemical exposures, climate change, and ultraviolet radiation which the WHO says contribute to more than 100 diseases and injuries

“What do we do with this?” he asked delegates. “What’s our role, and there’s a lot of greed involved here and a lot of government complicity to allow this to happen.”

Eight million die each year of hunger, including 21,000 children every day, in a world with an abundance of food, he said.

“Isn’t that a bad death that can be prevented?” he asked, quoting former United Nations Special Rapporteur on the right to food as declaring in 2002: “Anyone dying from hunger was dying from murder.”

“Is that part of our scope?” he asked.

And what of those millions who die through medical error?

He pointed to a 2012 documentary ‘It’s a girl’ – “the three deadliest words in the world” – about millions of girls who are killed, aborted, and abandoned in India, China and many other parts of the world simply because they are girls.

Should that trouble palliative care professionals when they come to conferences, he asked, just as much as finding out how to relieve pain, or improving the efficiencies of their team, to learning how to advocate change to governments?

And then what of the renewed nuclear threat? He said:

We are the people who know more about death and dying than anyone in the world. What kind of provisions are we making (about that), what kind of statements are we issuing?

If there is one group of people that has legitimacy to talk about death and good death and how to avoid bad deaths it is us.

What are we doing, (are we) looking at our navels, (asking) how many milligrams of this do we need, how many beds do we need, are nurses valued enough? How can we advocate to the politicians around us when the world is falling apart around us?”

These questions are the underlying focus of a (paywalled) article he recently published in the European Journal of Palliative Care, after it was knocked back by many other journals.

Co-authored with Canadian Professor Murray Enkin, the article asks whether hunger, disease and poverty are really only symptoms that our “human world is terminally sick”. It says of the world:

We have reluctantly come to accept our individual mortality and to embrace palliative care when cure is beyond reach.

What if it is time to think of palliative care for our collective humanity?”

(Access to the article, Does humanity need palliative care, can be requested via ResearchGate.)

Aspirations for a good death

Jadad told delegates that a survey of healthcare workers in a network of Colombian facilities has asked: how would you like to die?

The main responses were: to die in my place of choice, receive pain relief, and have friends and family around me.

He says that raises a number of questions: such as why do we need a specialised health system to deliver that and why doesn’t it already happen?

But it begged a bigger question for him: “Should we have higher aspirations for the biggest event of our life?”

Jadad certainly has, and he put some into practice for his 50th birthday, “curating” his own funeral and receiving a coffin as a surprise gift from his family. 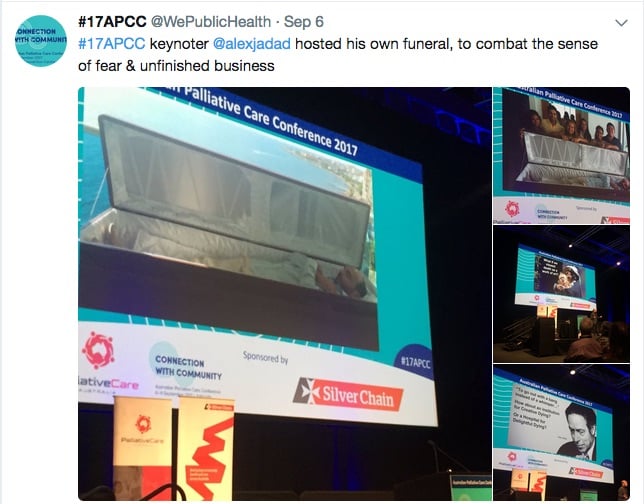 He wanted to consider what palliative care might look like if we had no fear about dying: “how much closer could we get to enabling everyone in the world to experience a good death?”.

In his practice run, in an effort to remove fear and regret from his last days, Jadad sent letters of apology to people he had hurt, thanked those who had helped him, and spent intense time with his wife and children, dealing with “a lot of issues in a very explicit way, dealing with our fears about hurting each other.”

At his ‘funeral’, they closed the casket and carried him off, with his funeral music playing. That music is now set as his alarm, “so I remember, when I wake up, that I could have been dead, and I need to experience whatever the day is going to show me in the most intense way, without fear.”

What if, he said, we were able to view death as a work of art, to go out with a bang instead of a whimper, to die happy, health and in love?

How about an institution for creative dying, a hospital for delightful dying… how about music, great food, massage, smoothies with opioids, and poetry?

What if we died in style, on our own terms, and we enabled each other to do it? What if we viewed death as a work of art? That’s a conversation I hope we can have.”

There’s much more to watch and consider.

Watch his full presentation at this link. 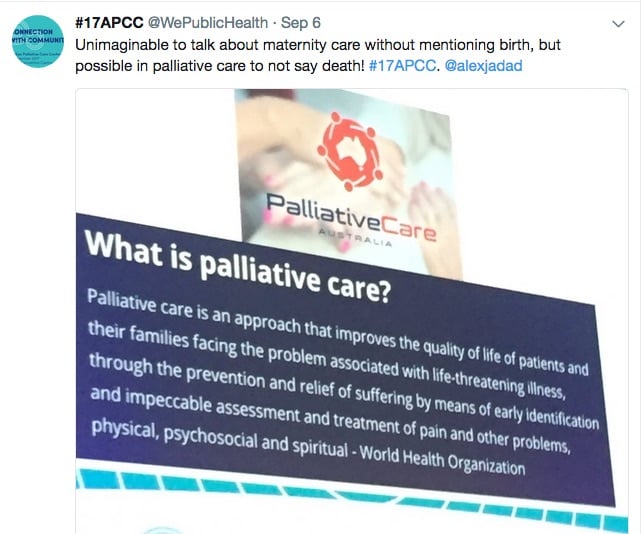 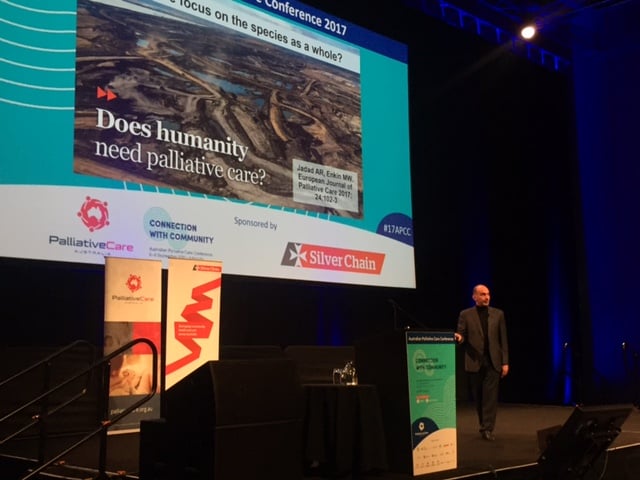 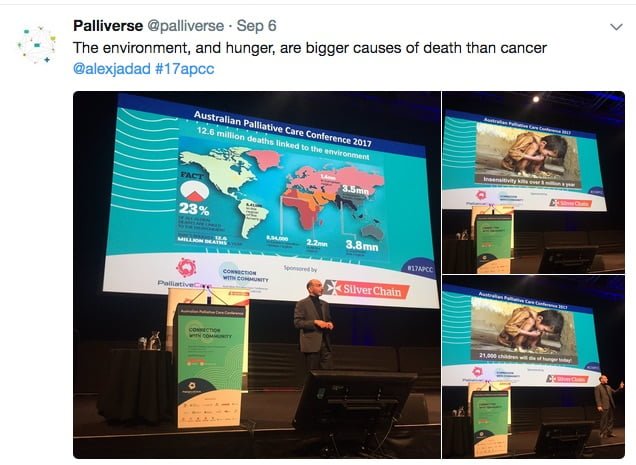 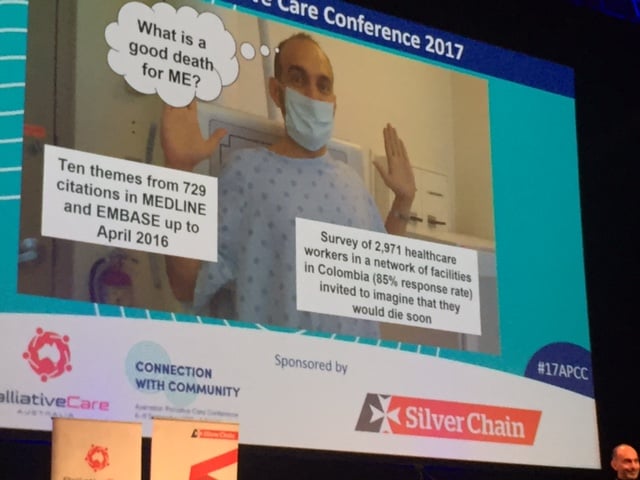 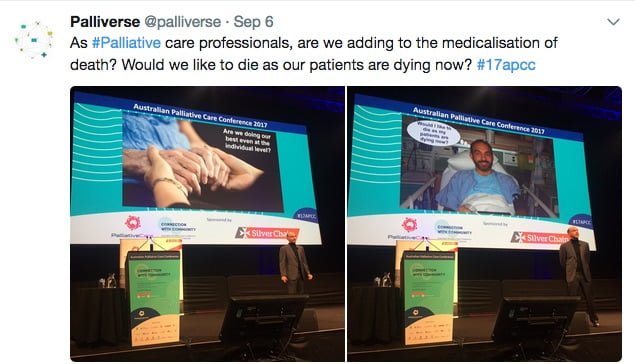 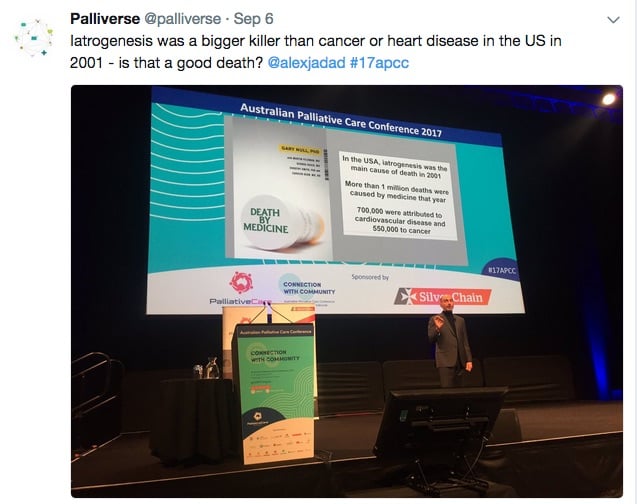 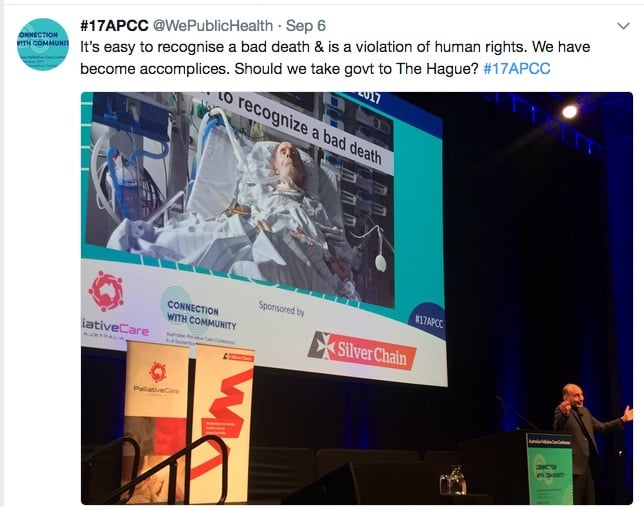 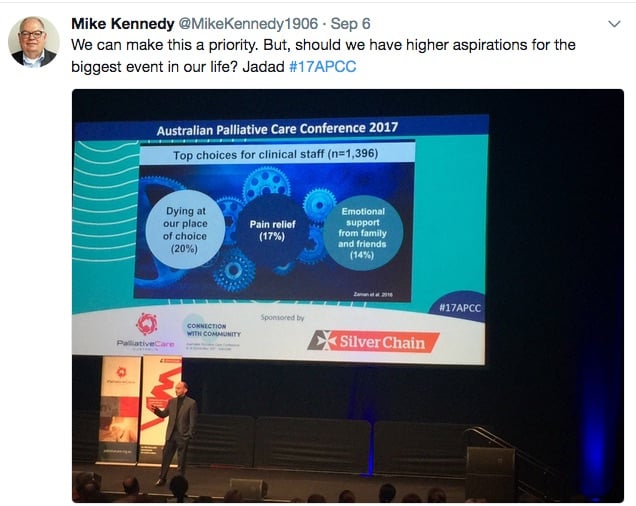 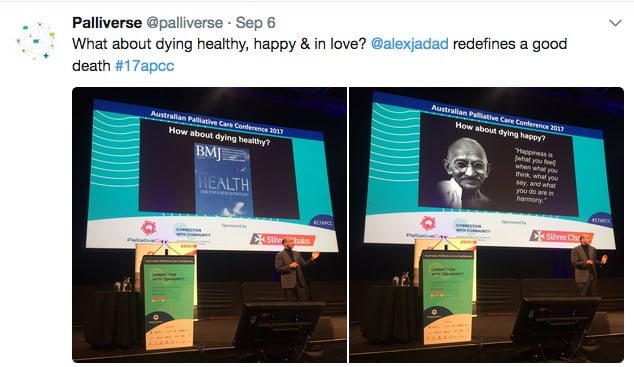 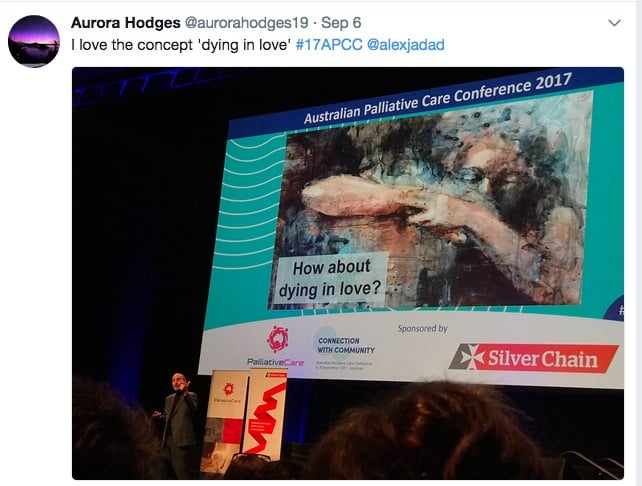 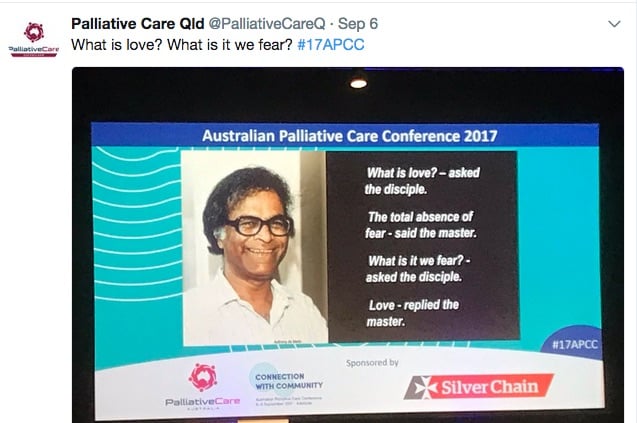 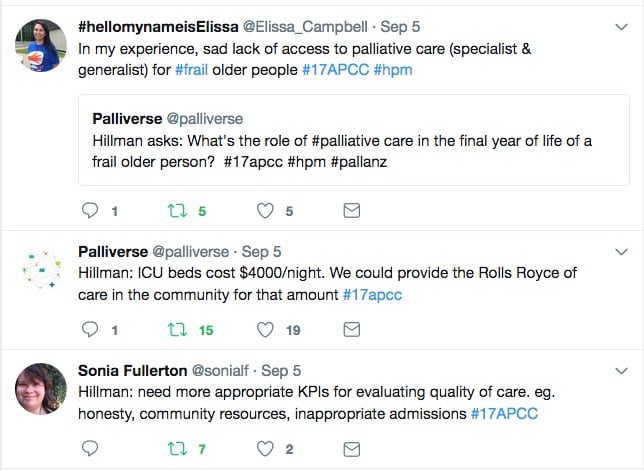 The conference wrapped up on Friday afternoon, but stay tuned as Marie McInerney has several more stories to file over the next week (thanks to Amy Coopes for this #MarieCatGif showing how hard she will be working).