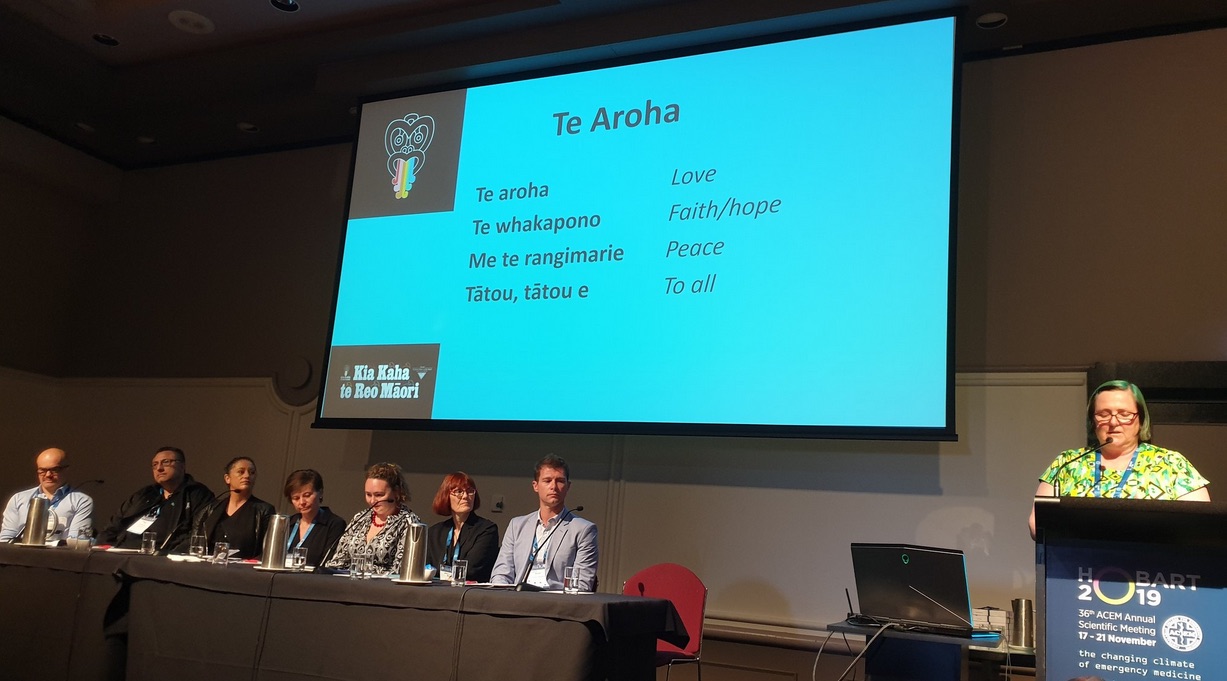 Cultural safety is about so much than embedding Aboriginal and Torres Strait Islander or Māori culture in a health service; it is also about the responsibility of non-Indigenous people and systems to recognise and address racism, bias and privilege.

This was the resounding message from a session at the Australasian College for Emergency Medicine’s recent annual scientific meeting in Hobart, where a panel of Indigenous health care workers from Australia and Aotearoa/New Zealand shared their lived experiences of institutional racism and urged colleagues to do better, by each other and for their patients.

The need for honest, continuous appraisal of attitudes, processes and outcomes was a recurring theme, with speakers conceptualising cultural safety as so much more than a strategy or series of actions.

Instead, the panel said, cultural safety was a way of thinking and of deliberate, intentional practice that required individuals, departments and health services to turn the scrutiny upon themselves.

It demanded that every member of staff be a “good bystander”, who championed Indigenous colleagues and called out racism each and every time they saw it.

Cultural safety also meant providing robust complaints processes that protected rather than punished those speaking up.

Whether practices and systems were culturally safe was not judged by a series of key performance indicators (KPIs), but by Indigenous patients and staff.

Dr Tanya Schramm, a Palawa woman, GP, and one of the founding members of the Australian Indigenous Doctors’ Association, welcomed delegates to nipaluna/Hobart and to lutruwita/Tasmania, while Riki Nia Nia – general manager of Māori Health for both the Auckland and Waitemata District Health Boards — offered a karakia to open proceedings.

It involved a genuine and continuous commitment to addressing privilege and bias among health care workers and within the system, and to ensuring access for all, she said.

“This is about emergency medicine’s role in achieving equity for First Nations people, and calling out racism in all its forms,” Mowatt said in an address to open the session, with an acknowledgement of the seminal work of the late Dr Irihapeti Ramsden.

This was echoed by Nia Nia, who is of Tuhoe and Ngati Kahungunu descent and serves on ACEM’s new Manaaki Mana ropu (Committee).

Nia Nia said cultural safety involved the surfacing of inequities in clinical practice, being deliberate and intentional, and constantly re-evaluating, to strive for improvement.

“Be intolerant of anything that gets in the way of excellence,” said Nia Nia. “We can do better.”

Rather than top-down approaches ‘pakeha-fying’ Aboriginal and Torres Strait Islander and Māori health to shore up the status quo, Nia Nia said cultural safety was about recognising the honour of working with First Nations peoples, and taking yourself and your practice out of the comfort zone of the hospital or clinic, and into the community to really listen to lived experience.

Associate Professor Elana Taipapaki Curtis, a public health physician of Ngati Rongomai, Ngati Pikiao and Te Arawa descent, stressed the importance of health services and employees scrutinising themselves, rather than putting the onus on Indigenous people for solutions.

“There’s a lot of good work happening around how to embed Māori and Indigenous culture in health services, but that’s not the answer in terms of cultural safety,” said Taipapaki Curtis, who is director of the University of Auckland’s Vision 20:20 program targeting 10 percent Māori and Pacific health workforce by 2020.

“The answer is with you fellas, with non-Indigenous culture.”

Raumati described being mistaken daily at work as the orderly, and the isolation of being the only Māori doctor on the floor, while Dashwood recounted being told he was ‘not black enough’ and asked who was the ‘last Aboriginal in your family’.

Both shared the exhausting toll of casual racism – throwaway remarks and deprecating gestures – from patients and colleagues, with ten or twelve such incidents in a shift undermining any sense of being safe at work.

Rather than expecting Indigenous staff to call out such behaviour, Schramm and Dr Kim Yates, a Waitemata emergency physician of Te Rarawa descent, both emphasised the importance of the “good bystander”, and of non-Indigenous allies calling out racism each and every time they witnessed it.

Jacqui Gibson-Roos, a Wongatha woman who is consumer representative to ACEM’s Council of Education and co-chair of its Reconciliation Action Plan steering group, said silence was the most pervasive form of racism, “and that is what cultural safety is about”.

Nia Nia and others stressed the importance of reporting mechanisms for discrimination and bullying that allowed complaints to be anonymous and held perpetrators to account, rather than further victimising the complainant and making them the issue.

This was particularly important for trainees in a hierarchical system where those perpetrating racism were also those with the power to make or break a career, Dashwood said in an interview with Croakey after the event.

“I know I was very quiet when I saw and experienced racism because I needed a job, I needed to keep the right people happy to stay employed and complete my training,” he said.

“Now that I’ve completed it I regret that I didn’t stand up at different times.”

Expecting Indigenous doctors to be all things to all Indigenous people, and the token expert on all such matters, was also a huge and unjust burden for Aboriginal, Torres Strait Islander, Māori and Pasifika staff, Dashwood added.

Just because you’re an Aboriginal person living in that area doesn’t mean that that’s where you are from.

If you were dispossessed from your land, if you were Stolen Generation, just because you live there and you might consider that to be your homeland now, deep down you feel like you don’t belong.

Don’t make us feel like we should be an expert in everything Aboriginal in the area that we live in, because there are many, many reasons why we are not.”

Raumati said there was an important role for ACEM to play, not only in fostering a more supportive environment and facilitating the mentoring of more Indigenous trainees, but in terms of embedding cultural safety into its curriculum as examinable content.

As a trans-Tasman College, he said it was not good enough for ACEM to expect all New Zealand trainees to learn the intricacies of snake bites – something they would never encounter – while the health of Māori patients, comprising some 20 percent of the New Zealand population and a not insignificant proportion of New Zealanders living in Australia, was not compulsory learning.

While he did not dispute the importance of Indigenous health as a core professional competency, Dashwood argued that it should not be a matter for the College, but a requirement for national accrediting and regulatory bodies in both countries.

From an Australian perspective, he also counselled against the homogenising of hundreds of distinct language and cultural groups.

“Many of those languages are dead, the culture is scattered, the verbal history that we had, those songlines, were broken. Families were disjointed, children were taken away, people were taken off their land, knowledge was lost,” he said.

“Unfortunately colonisation has shattered it, and trying to say that Australia from an Indigenous point of view is just one nation is not going to work.”

Instead of learning the intricacies of a particular culture, Dashwood said cultural safety was about breaking down stereotypes and considering other perspectives.

“You just have to know how to be a good doctor, how to talk to someone, be open minded and know how to seek help and who to ask for help,” he said.

Raumati said it was especially important to get cultural safety right in an emergency department because, for many Māori people, it was their main point of contact with the health system, taking the place of primary care.

The session also put a strong emphasis on practical steps delegates could take to put cultural safety into practice in their department immediately.

We’ve summarised some of the recommendations below:

Perhaps the most powerful moment in the session was when each of the panellists was asked to describe what success would look like for them.

For Raumati, it meant not being the only Māori doctor at handover, and not being mistaken for the orderly every day at work.

For Dashwood, it was receiving his Fellowship pin that weekend, wearing the possum skin cloak gifted to him by his Elders to signify that he was a “higher level medicine man in our community”.

“I was very, very proud that I still have cultural knowledge within my family group to educate me,” Dashwood told Croakey.

“I stood up in front of everyone wearing that cloak representing not just myself and my family but Aboriginal people as whole to say you can do whatever you want to do, you can do to higher level education, you can go to university, you can complete a specialty college, and you can help your people.”

Taipapaki Curtis described having the sovereignty and self-determination “to realise our own dreams, in our own way, on our own terms”, and said:

We could have our own emergency department, our own hospital, our own land back. That would be a great day.” 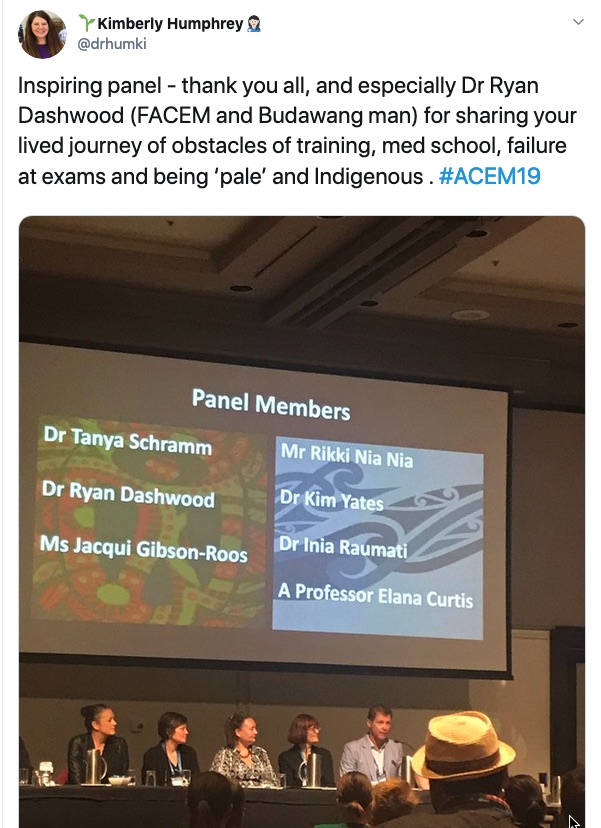 The session closed with a waiata, Te Aroha. Watch it below.

Read this 11-page Twitter summary of the workshop discussions.

The 2019 ACEM ASM was held in Hobart from November 17-21. Amy Coopes is covering it for the Croakey Conference News Service. Bookmark this link to track our coverage, and read our previous ACEM ASM coverage here and here.