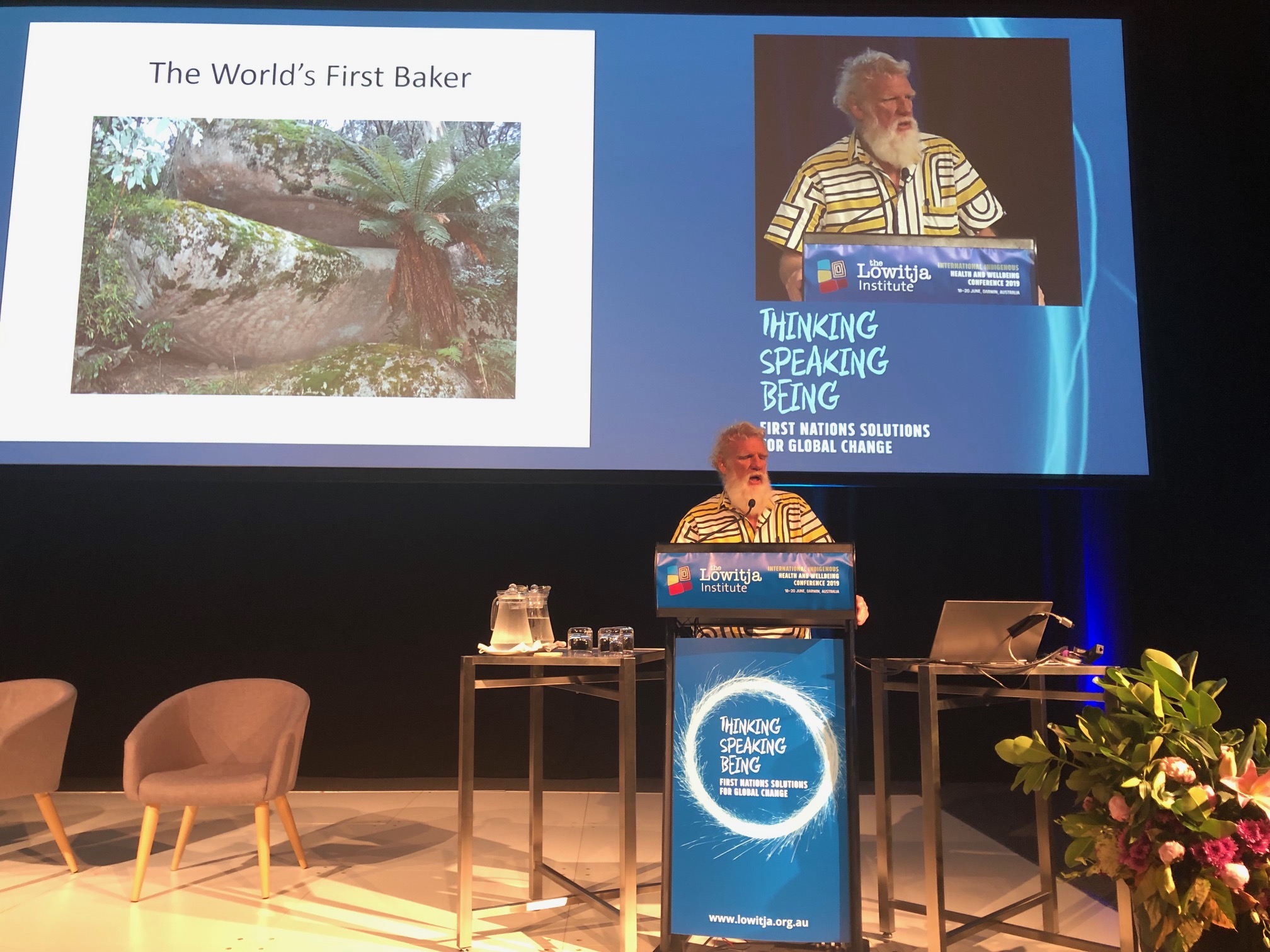 Aboriginal author Bruce Pascoe received a rapturous response from delegates at the Lowitja Institute’s International Indigenous Health and Wellbeing Conference in conference in Darwin on Wednesday.

Pascoe, who also presented to the Progress 2019 conference in Melbourne on Thursday, urged Australia to learn from the sophisticated knowledge of Aboriginal and Torres Strait Islander people in land management and maintaining peaceful, complex societies.

Marie McInerney and Summer May Finlay are reporting #LowitjaConf2019 for the Croakey Conference News Service.

Award-winning Aboriginal author Bruce Pascoe this week continued to shine a light on the hidden and hijacked stories of a sophisticated Aboriginal and Torres Strait Islander culture before colonisation that he said modern Australia still cannot bring itself to acknowledge.

Pascoe told more than 750 Indigenous health researchers from across Australia and the globe that Australia would do well at least, in the face of an uncertain climate and environment, to recognise that Aboriginal and Torres Strait Islander people had long held the answers to better land management.

“Our people did and do hunt and gather, but we also organised massive fields of agriculture,” he told the Lowitja Institute International Indigenous Health and Welfare conference in Darwin, on Larrakia land.

Importantly, the plants Aboriginal and Torres Strait Islander people grew and harvested were not “imported, exotic agriculture”, but native species that were domesticated by Indigenous people “because they identified them as the plants that were good for people, good for our health, good for the earth.”

“That’s not just a cosy feeling about what our people did,” he said. “It’s why our people did it, which is the most important point.” 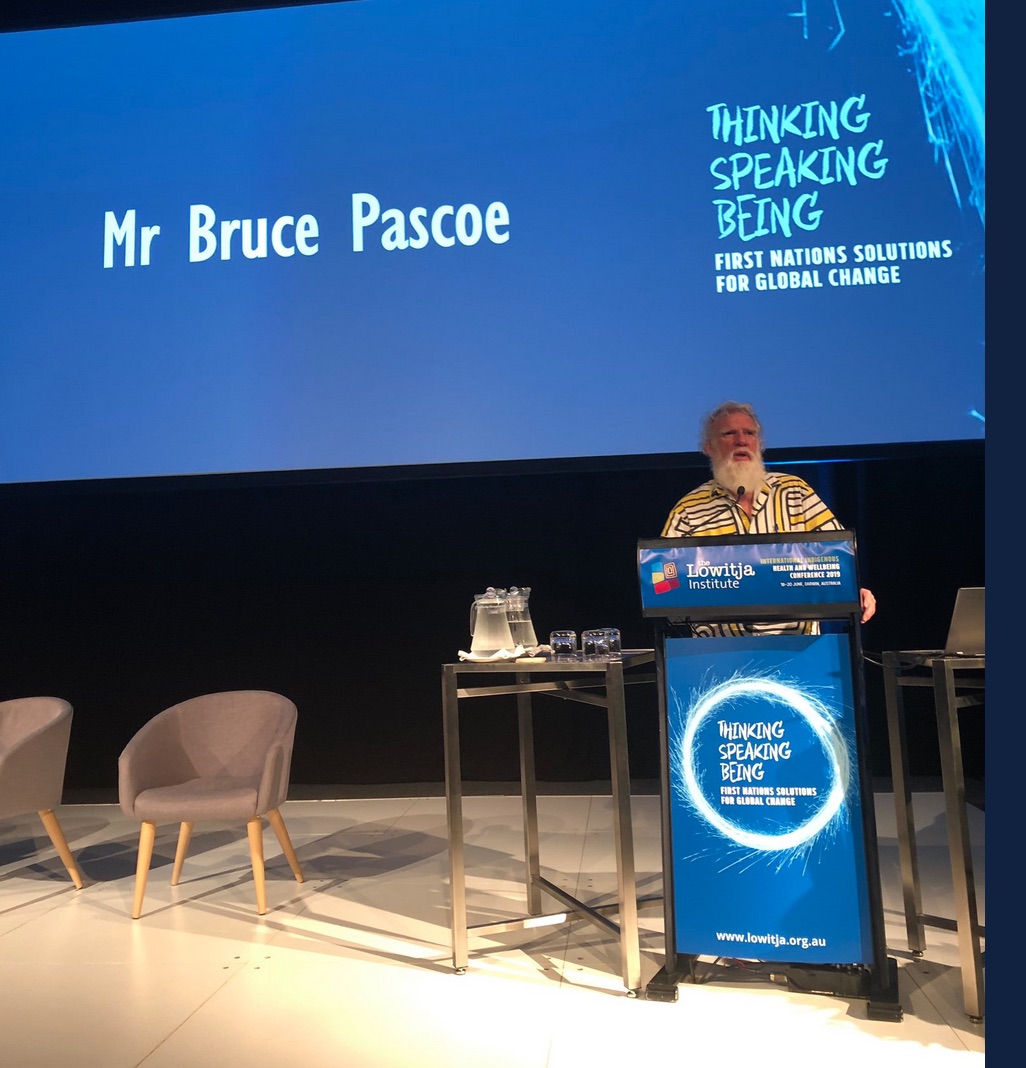 Pascoe, who is of Bunurong, Yuin and Tasmanian heritage, received a standing ovation at the conference where the enthusiastic tweeters had his name trending nationally for hours on Twitter.

His deconstruction of colonial narratives resounded for health researchers, who heard and delivered many presentations during the three-day event on the ongoing impacts of colonisation on the health and welfare of Indigenous people across the globe.

In his landmark book Dark Emu, which has won multiple literature awards since it was published in 2014, Pascoe challenged the long-held Western narrative that pre-colonial Aboriginal society was merely a hunter-gatherer society and was uncivilised.

It and his ongoing work draw on diaries and letters from explorers and early British colonists, and emerging artefacts that have laid undisplayed and unexamined in museums across the country, to build the evidence that “we were incredibly sophisticated agriculturalists”.

Another keynote presenter, leading Maori academic Dr Tahu Kukutai saluted Pascoe’s work when she took to the stage after him.

“I love the way you use colonial sources to flip the narrative,” she said.

Yet, Pascoe told the conference, for all the awards and success of his book, it tells a history that much of Australia continues to deny or ignore.

That can be seen in the remarkable story of the Brewarrina fish traps in New South Wales, an elaborate network of rock weirs and pools along a riverbed that are estimated to be over 40,000 years old and one of the oldest man-made structures on earth.

“No Australian goes there,” he said.

“Australians haven’t yet accommodated the fact that Aboriginal culture is a leader in the world in many ways.”

But he said he was alerting the local community that people from other nations will start to come in droves, “wanting to find the fount of civilisation” once they learn about the site and are able to understand that it represents “an incredible moment in the human family”.

Pascoe told delegates he was pleased with the enthusiastic reception his book has received.

But he worries that it won’t prompt the action needed to transform the lives of Aboriginal andTorres Strait Islander people in ways that could address many of the issues under discussion at the conference and lead to change “for our children”.

Like many Australians, for years he accepted many colonial myths, including being taught every Anzac Day that Australia was blessed to have never had a war on its shores, when in fact Indigenous people had been subject to brutal frontier wars.

When he began to dig deeper, he “kept finding information that didn’t relate to the other part of the history of Australia that I’d been taught in every school I’ve been to, that Aboriginal people were mere wanderers on the earth, mere ‘hunters and gatherers’…”

His slides featured examples of the evidence that is challenging those myths.

One showed a photo of a large soil turning tool that he said had been found buried in the bowels of the Australian Museum, never displayed or catalogued in a history book.

It should be on both the school curriculum and the Australian flag because of what it told of an advanced early agriculture, he said.

Another slide showed a grinding dish, which he said was found to have starch embedded in the fissures – “35,000 years old, double the age of the Egyptians who are said by Google and Wikipedia to be the inventor of bread”.

An early map showed where Aboriginal people had been observed to be sowing and irrigating grain, he said.

Dark Emu also disputes colonial history that Aboriginal people did not create settlements. It says there is significant evidence that they built communities, “with houses and cemeteries”, and established complex societies, over 60,000 years, which “relied on peace”.

It delights in telling the story that, in 1845, explorer Charles Sturt and his party were rescued when they encountered a village of around 400 Aboriginal people in South Australia and fed on “some roasted ducks, and some cake”.

“We did not just invent bread, we invented society,” Pascoe told the conference. “This is an incredible moment in the human family.”

It’s for those reasons, Pascoe said he doesn’t talk about damper, or use the term ‘bush tucker’. He said:

I talk about food.

You can cut the legs off an Aboriginal achievement through diminishing the language.

In an interview later with Summer May Finlay for the Croakey Conference News Service, Pascoe agreed it was surprising and frustrating that it was taking so long for the rest of Australia to listen to a story that Indigenous people had been telling for so long.

That was particularly the case in a world that was under threat on many levels, including from the climate.

“What the old people did was really remarkable, not just in Australian terms but in world terms,” he said.

“It was such a sophisticated society and it was produced so early.

“It’s so frustrating to think it was entirely dismissed by Europeans as being too simple to worry about it, when the whole basis of it was so profound and the world is aching for a solution like this now.” 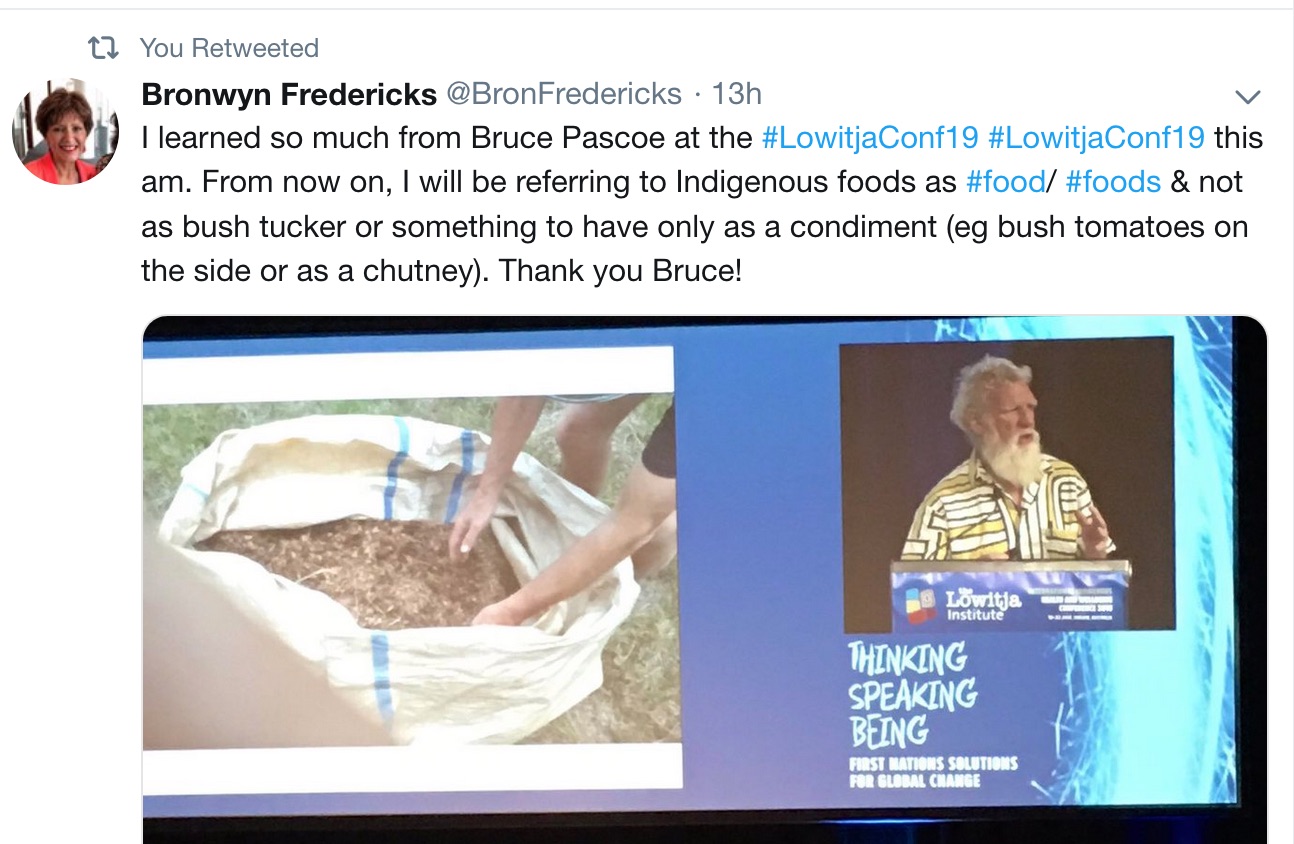 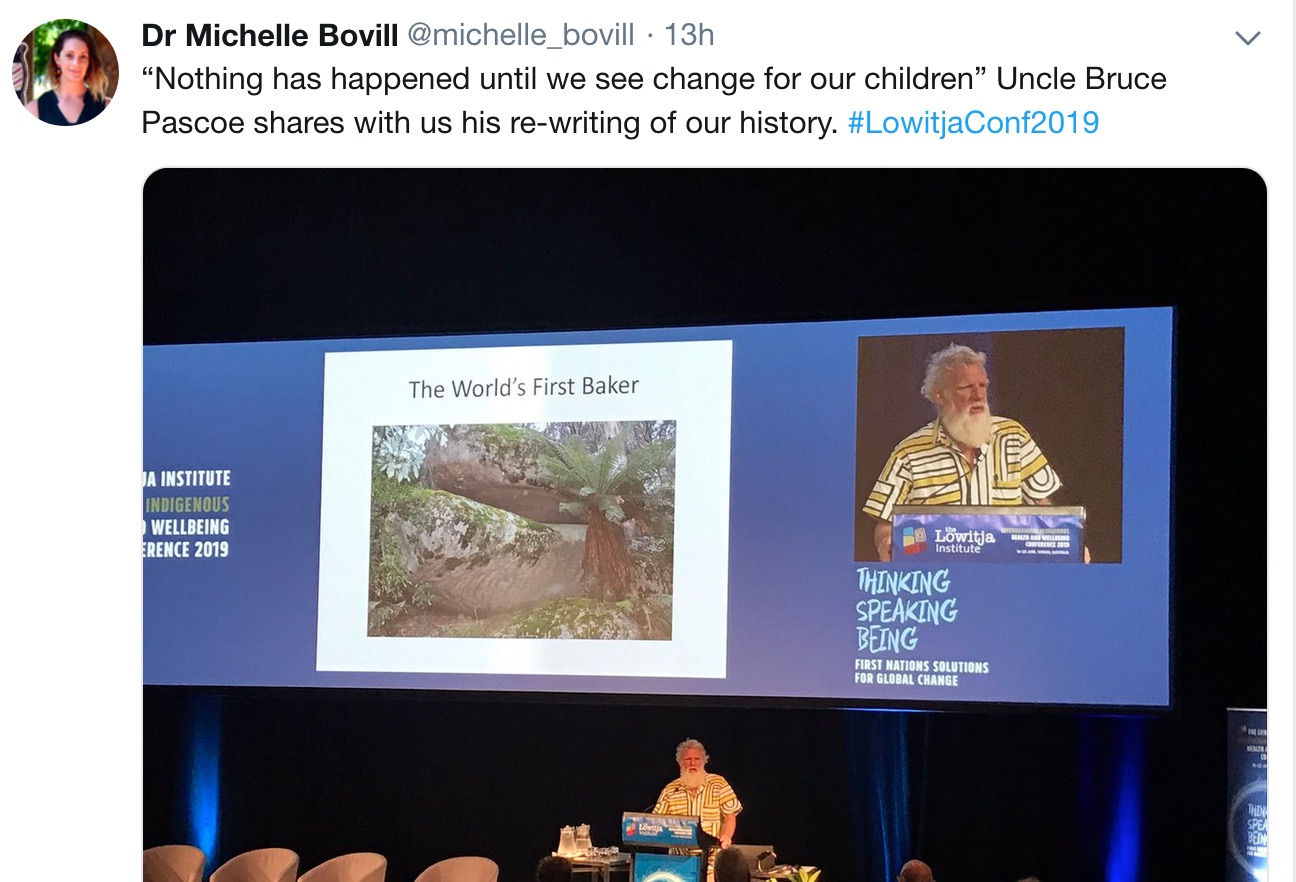 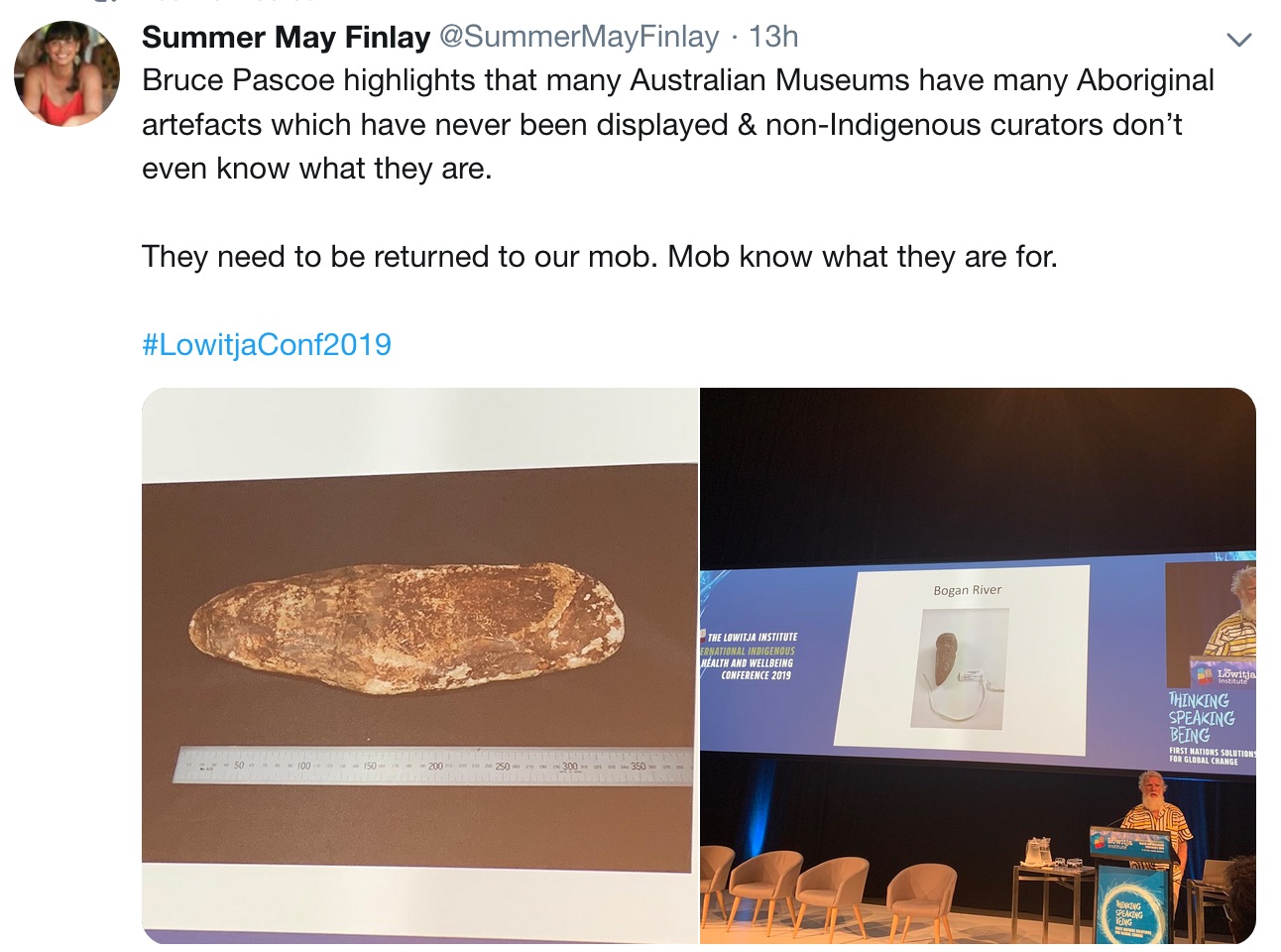 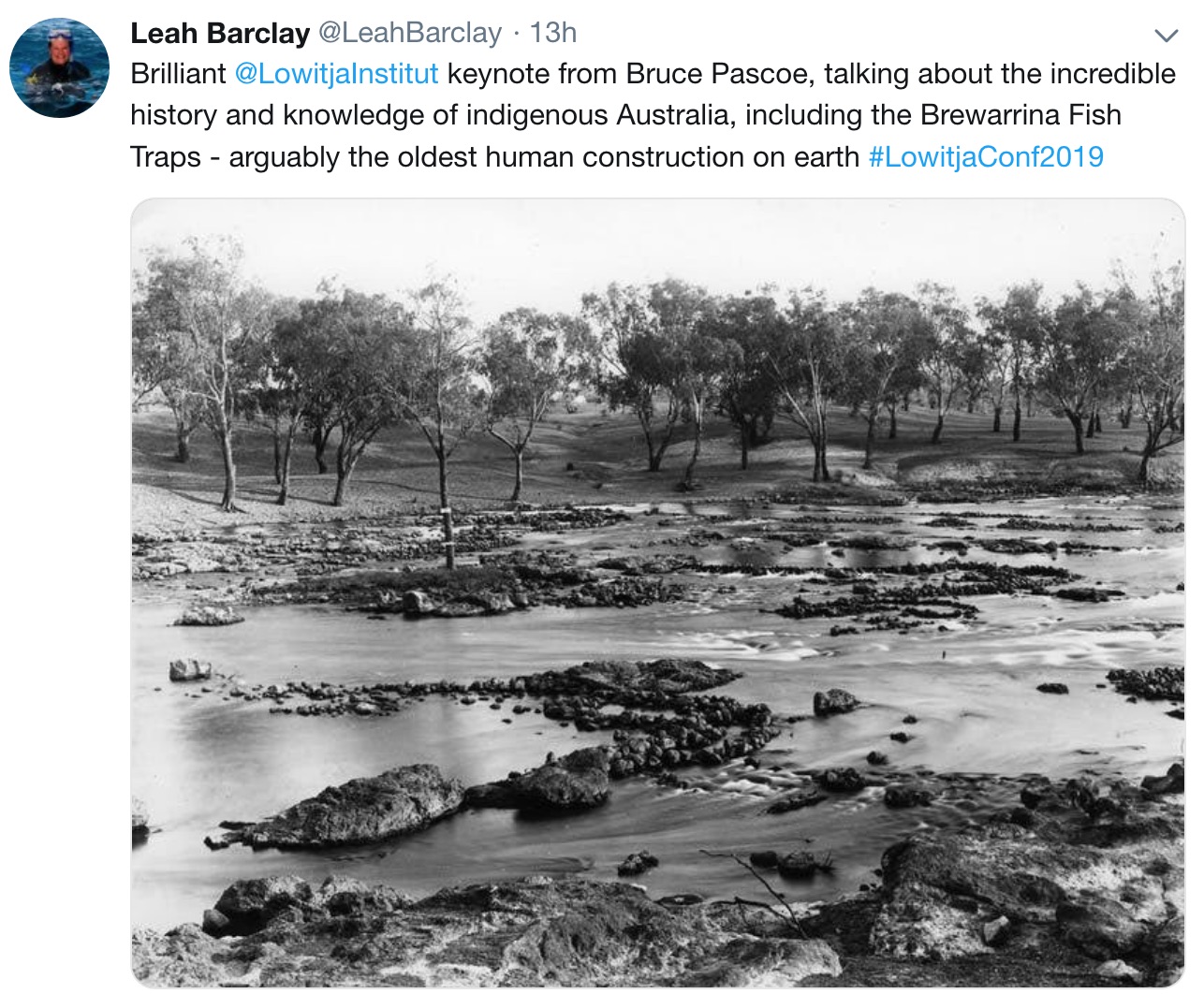 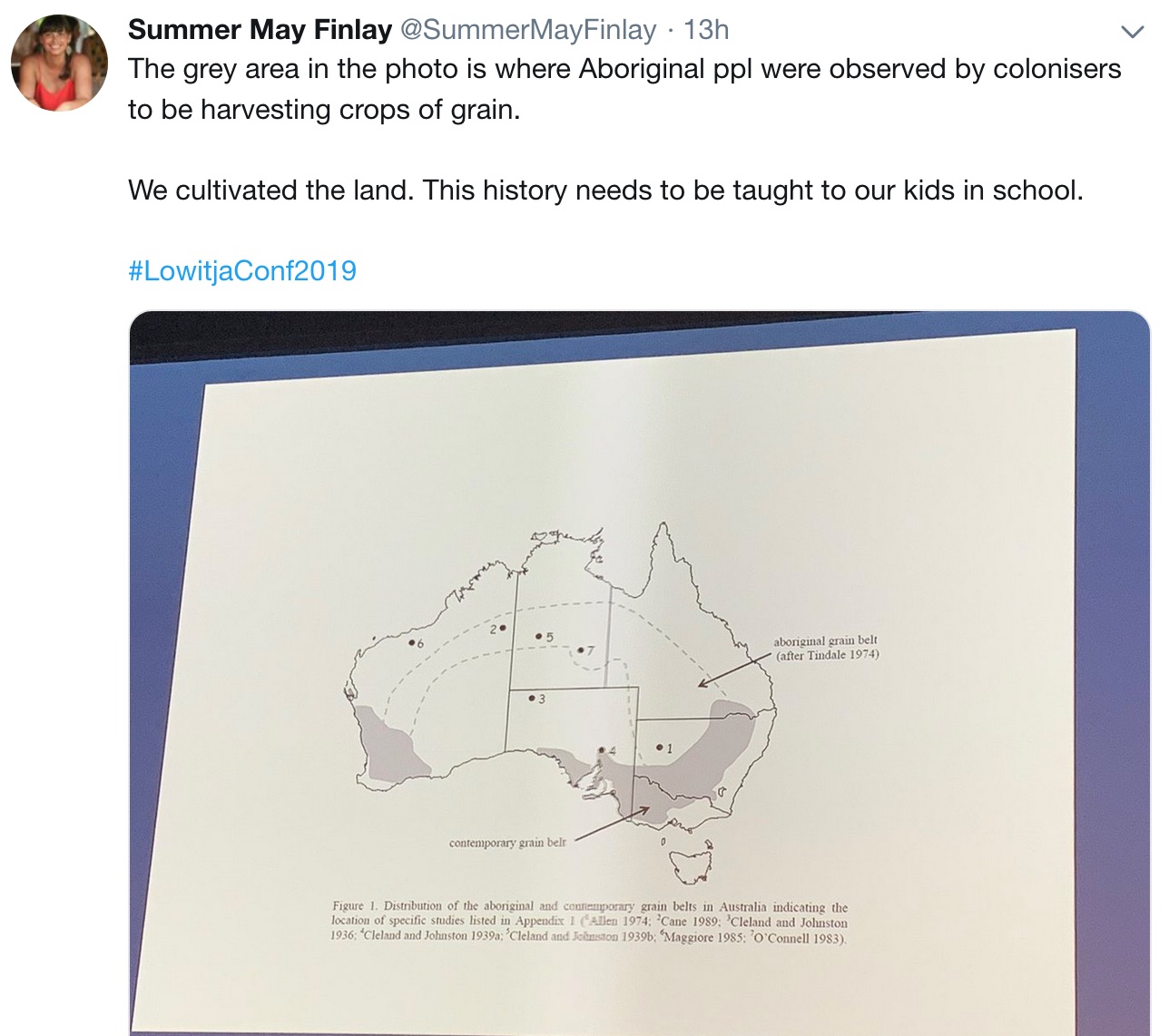 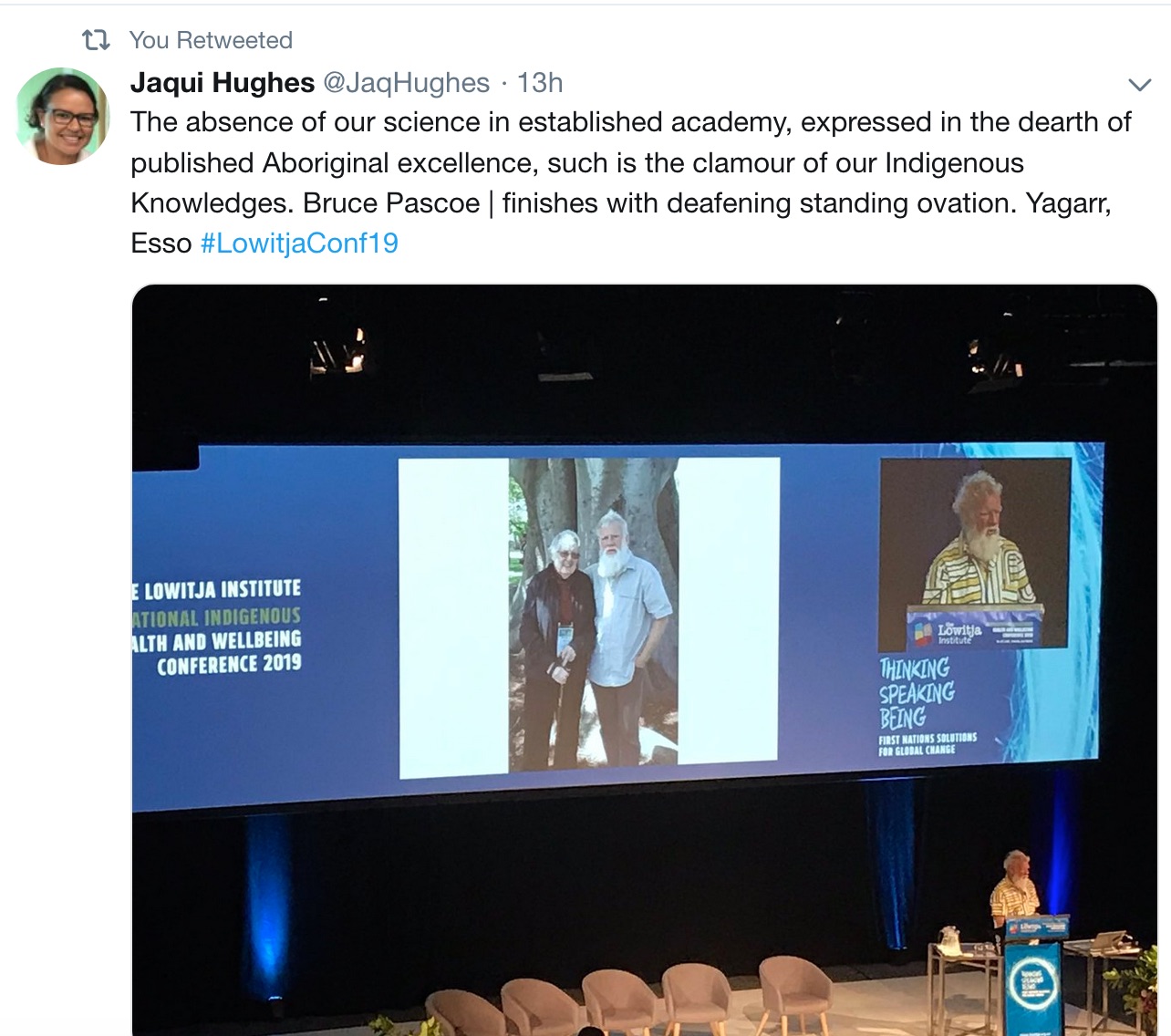 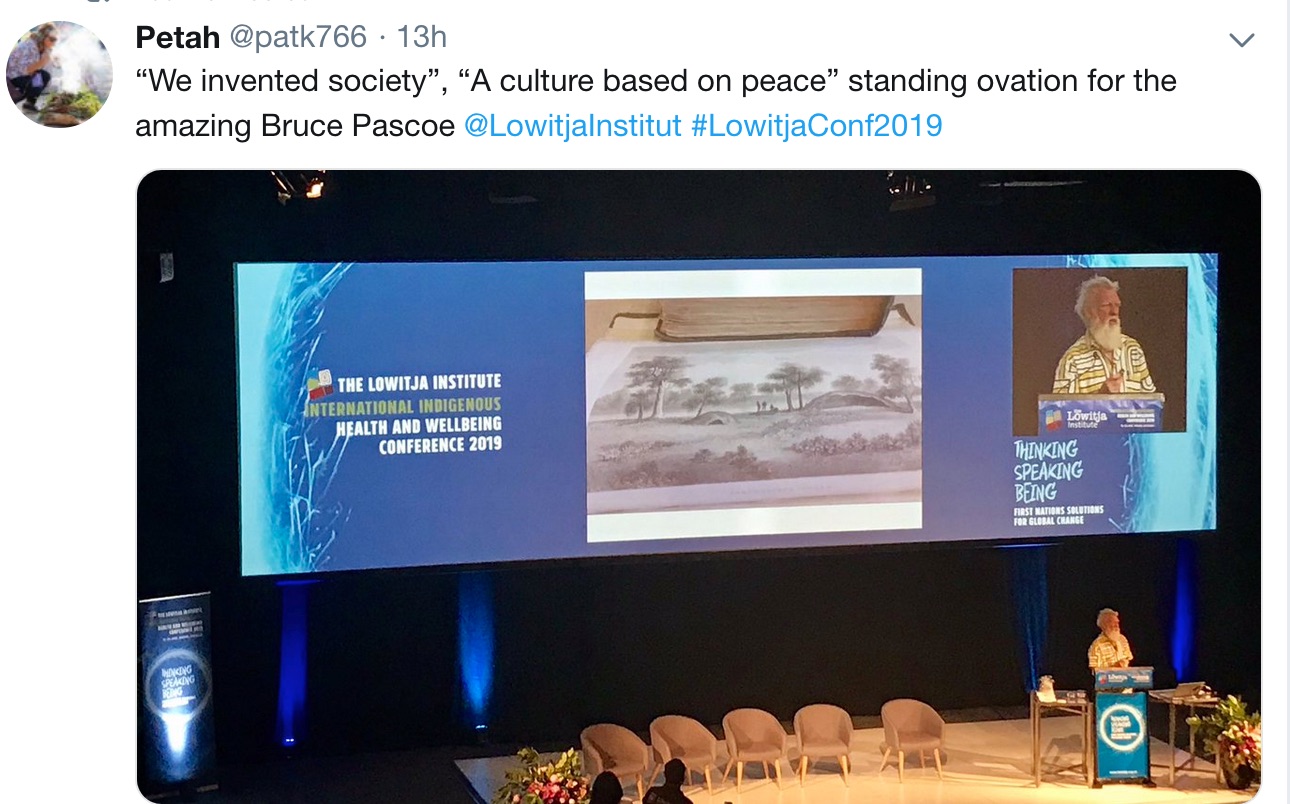 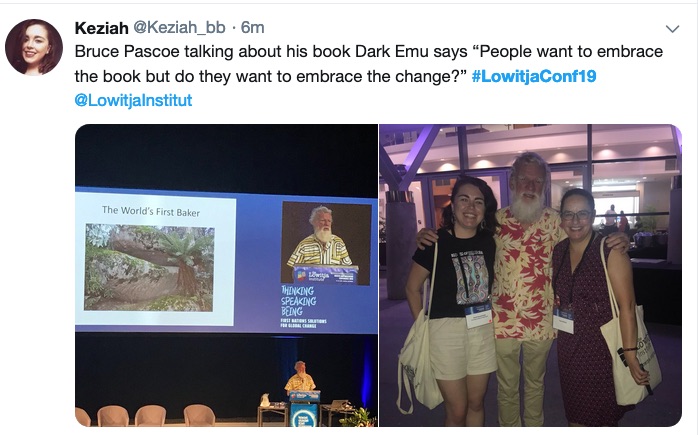 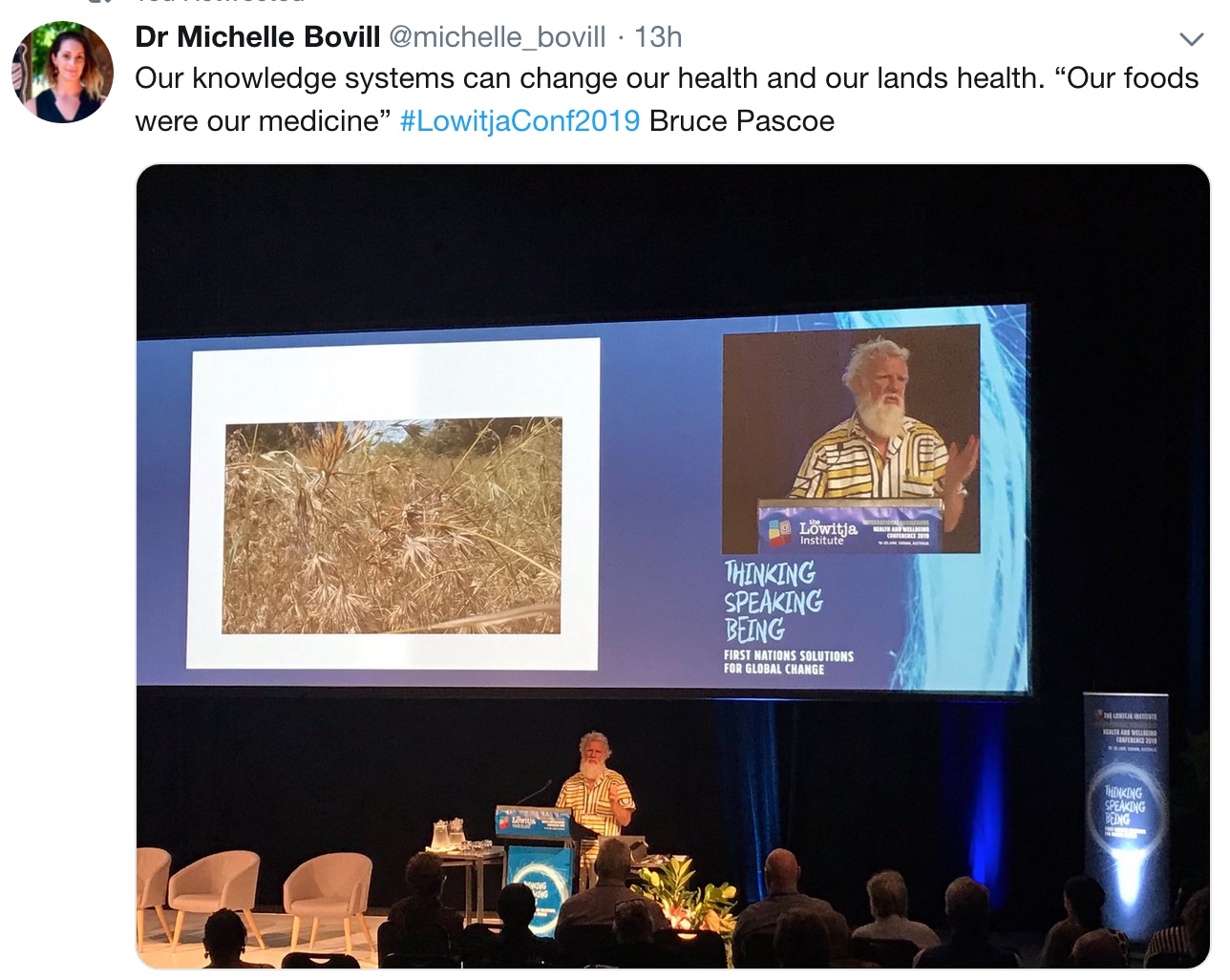 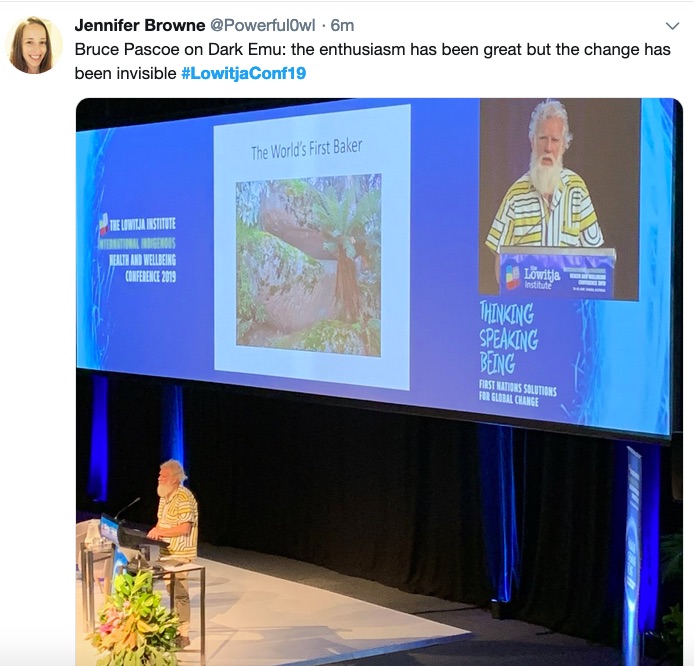 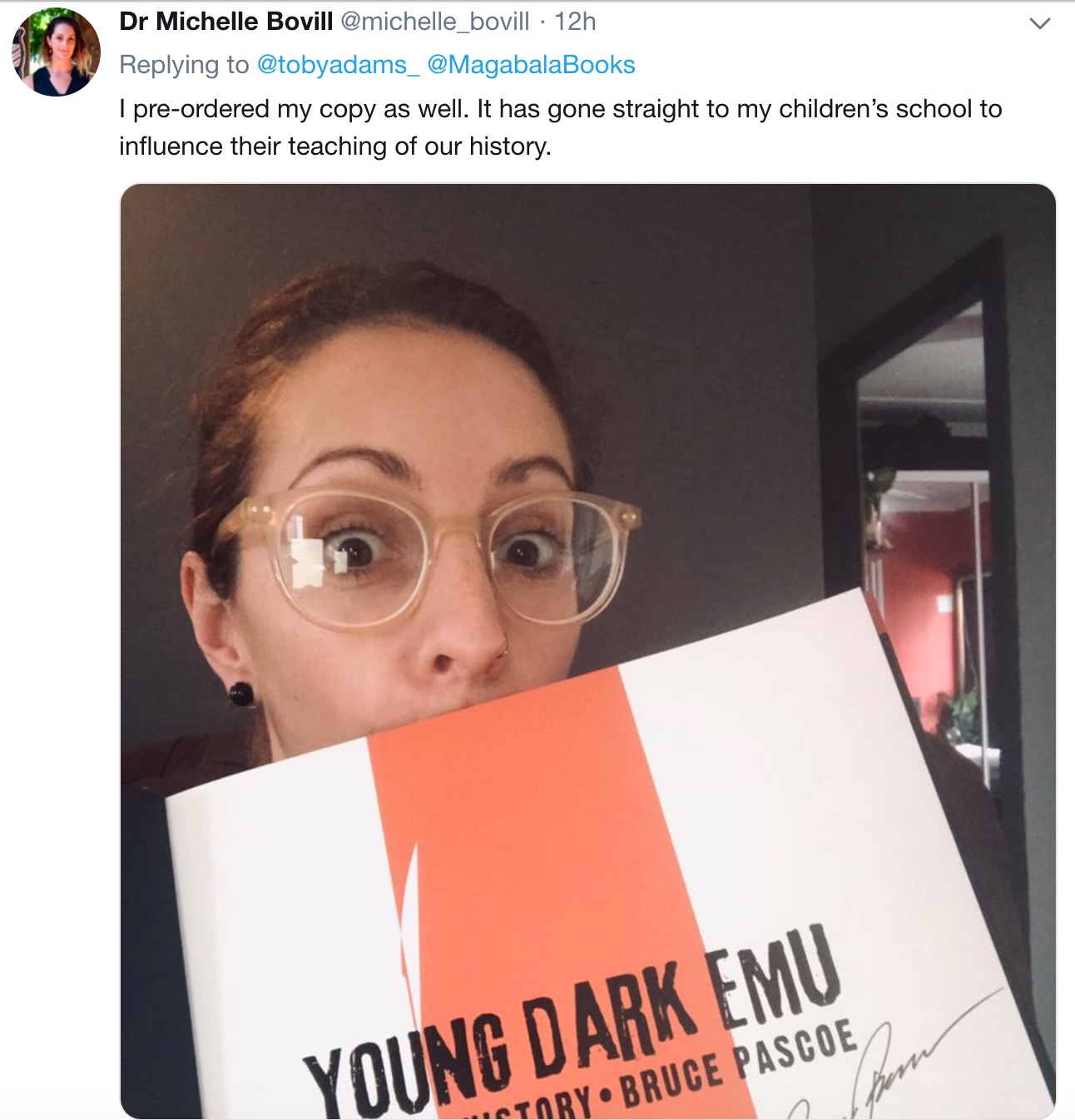 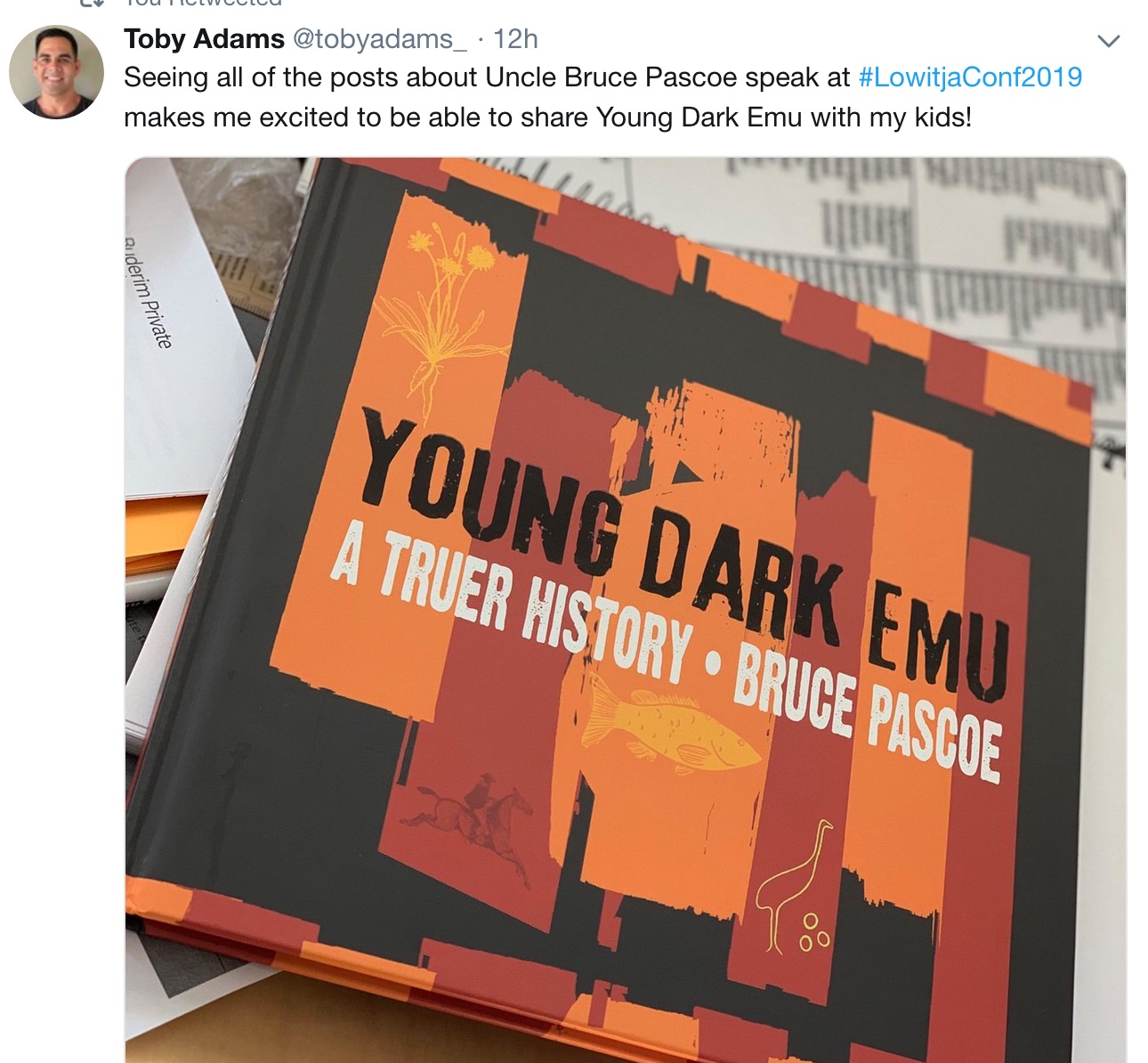 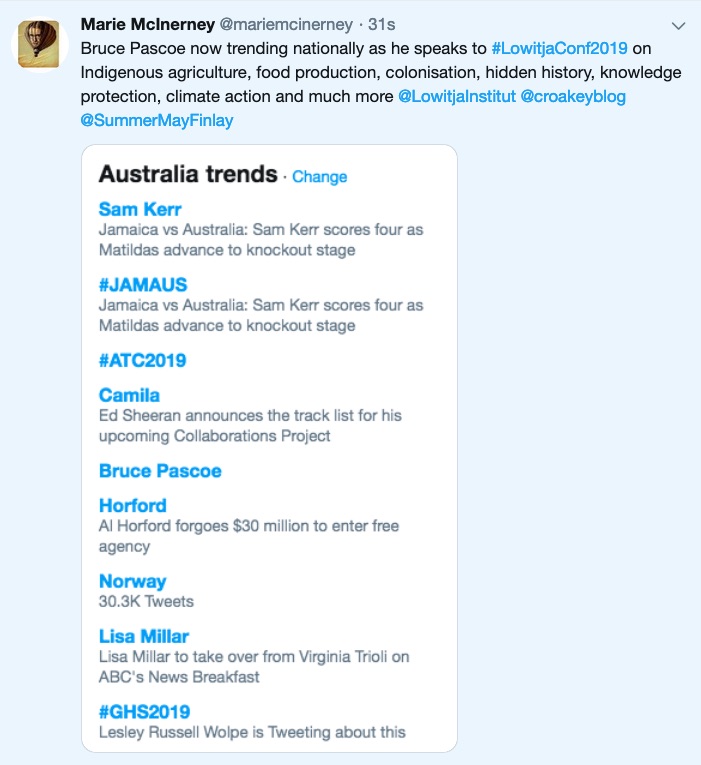 Listen to this interview with ABC Radio National (“I want people to concentrate on the story and be determined to change Australia for the better”), and watch the full conference presentation here. 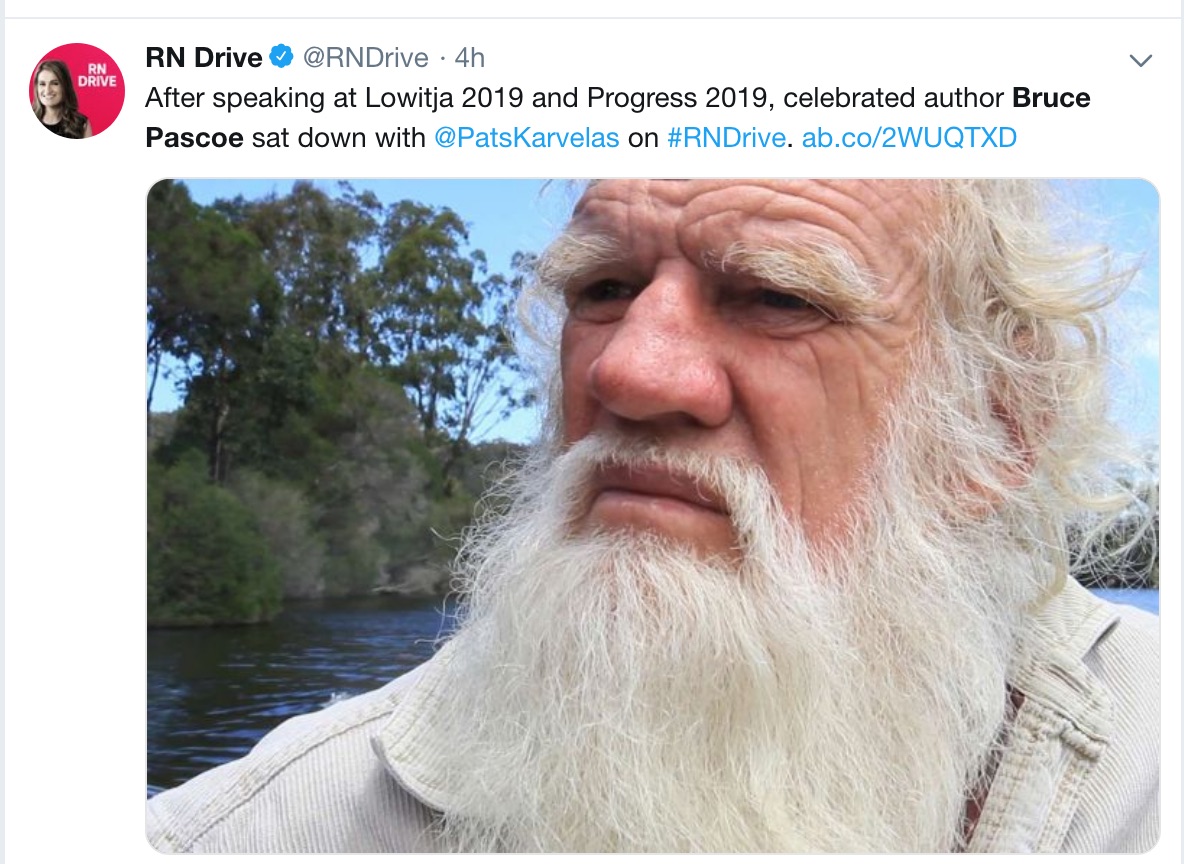 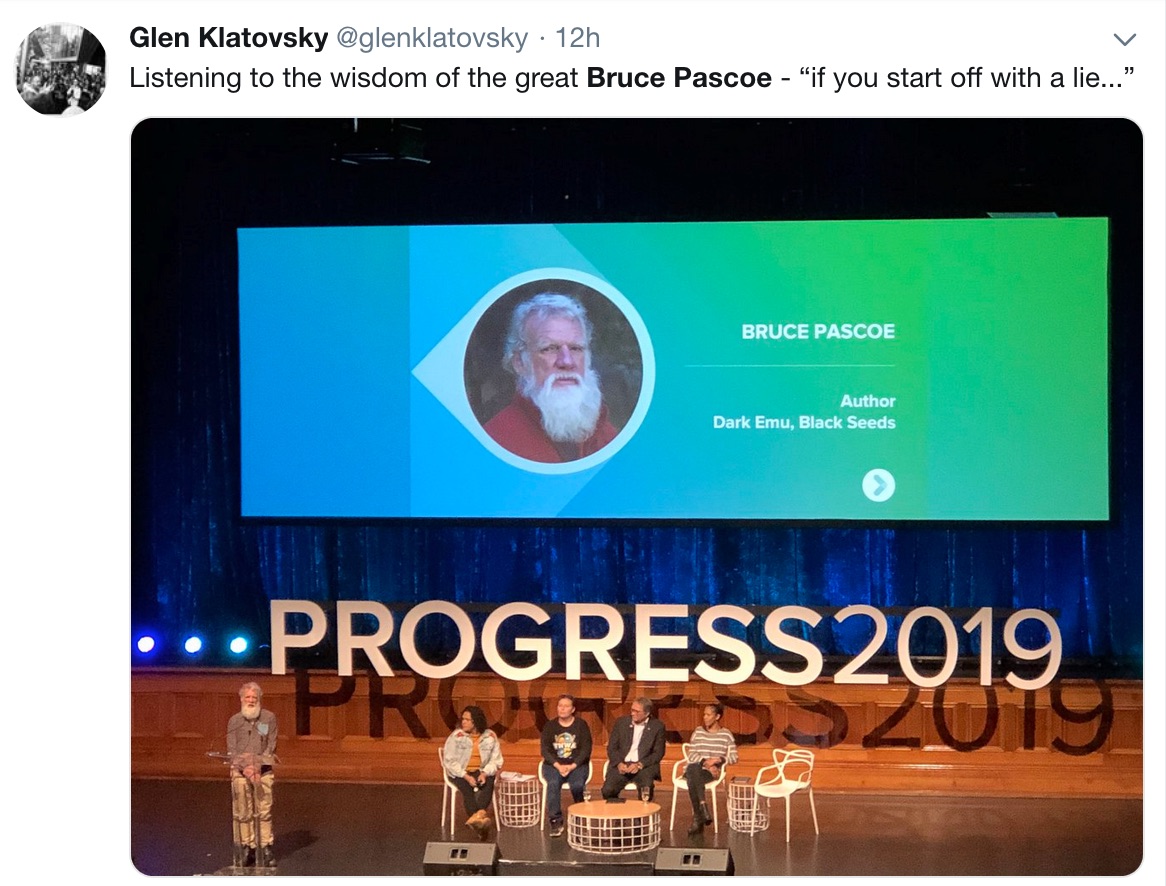 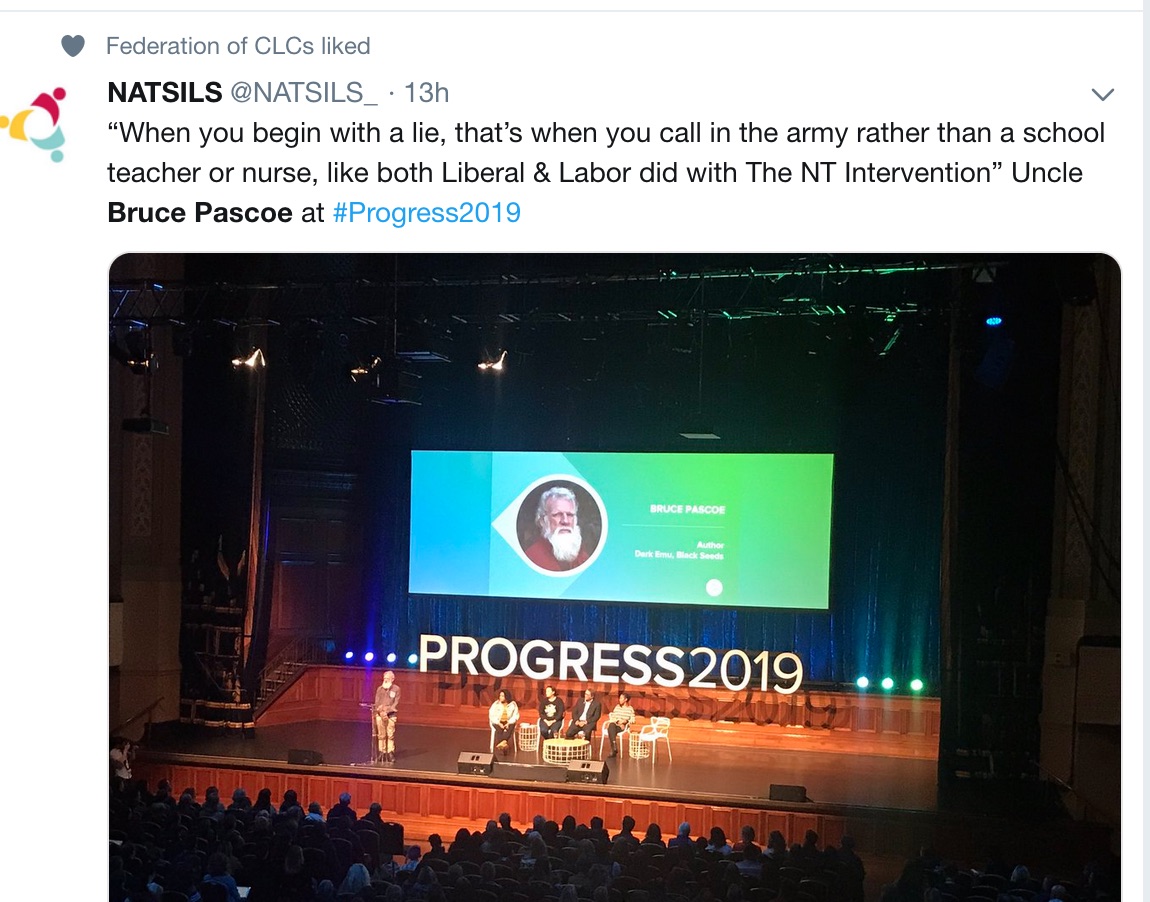 Summer May Finlay and Marie McInerney are covering the #LowitjaConf2019 for the Croakey Conference News Service. Bookmark this link to follow the coverage.