Home The Croakey Archives Croakey projects archive #JustClimate Stories of resistance and solidarity, from the #WaterProtectors of Standing Rock, to #ClintonsWalk 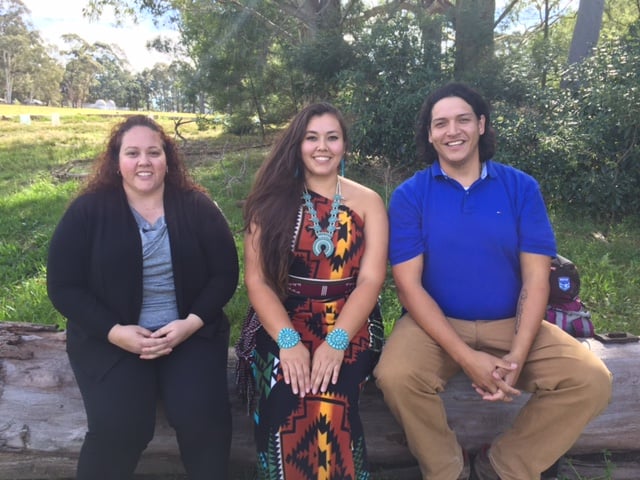 Stories of resistance and solidarity, from the #WaterProtectors of Standing Rock, to #ClintonsWalk

It was dark and cold – temperatures were below zero – when the water canons fired on crowds gathered on the country of the Standing Rock Sioux Tribe last November, some of whom had travelled long distances to join the movement to stop the North Dakota Access pipeline.

Photographs and footage give some sense of the dangerous conditions for those putting their bodies on the line to protect the Standing Rock reservation’s water supply and sacred sites.

Two of those water protectors, Janelle Cronin and Zachary Wamego, recently visited Australia, giving presentations about the trauma and violence experienced by many at Standing Rock.

They were invited to Australia by Marlene Longbottom, a Yuin woman from the NSW South coast, who forged a strong connection when she met them as a visiting scholar last year at Purdue University, where Cronin is a graduate student completing a Masters of Curriculum Studies.

Cronin is from the Dine people of the Navajo Nation, and Wamego is a member of the Prairie Band Potawatomi Indians of Kansas, whose family have been involved with the American Indian Movement. 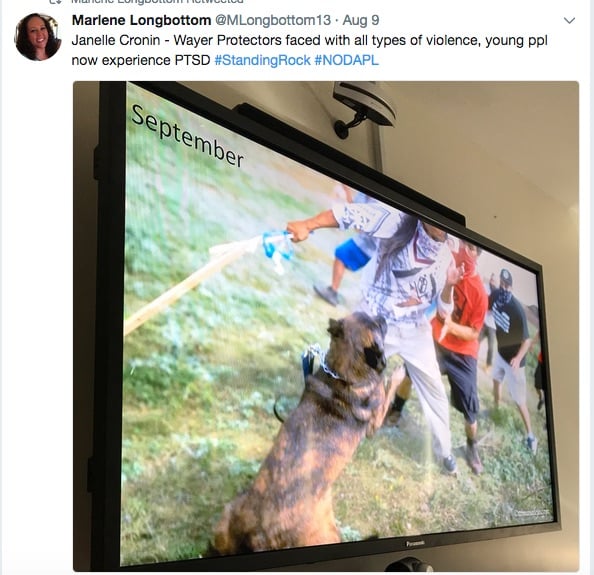 Their visit to Australia was in partnership with the Australian Health Services Research Institute at the University of Wollongong and Waminda South Coast Women’s Health and Welfare Aboriginal Corporation at Nowra, and funded through Purdue University.

In a recent presentation at Macquarie University, Cronin and Wamego showed photographs of police dogs attacking the Standing Rock crowds, of tear gas and rubber bullets being fired.

They told of aerial harassment by drones, and the mental health aftermath, including the PTSD now suffered by some of the Water Protectors.

Although the stories they told were harrowing, Cronin and Wamego ultimately presented a message of hope, describing an upsurge in resistance and solidarity generated by Standing Rock.

“We have stories of violence, of police brutality, of pipelines of oil – but we also have stories of strength, of resilience in my people and that’s what was important for me – was to come here and share our stories of survival,” Cronin said.

During their visit, Cronin and Wamego also connected up with Clinton Pryor and his epic walk across Australia, as featured in the latest edition of The Saturday Paper (see his front-page splash at the end of this post).

In their Macquarie University presentation, Cronin and Wamego described First Nations and others who stood in solidarity together at Standing Rock, as well as US veterans who came to protect the water protectors, saying the US Government as being at war with its own people. 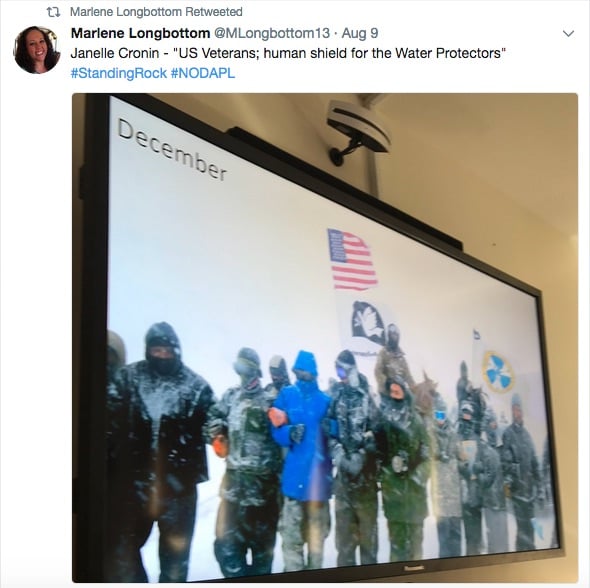 As Inside Climate news reported recently, oil is now flowing in the Dakota Access pipeline under the Missouri River, just north of the Standing Rock Sioux reservation.

However, Cronin and Wamego said many other such developments had been blocked as a result of an upsurge in resistance among First Nations people in the US, and increasing support from non-Indigenous people. 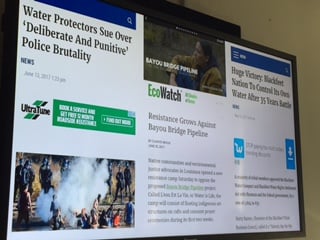 The Standing Rock Sioux Tribe has since also joined other Native Nations from across North America in committing to uphold the Paris Climate Change Agreement and “to aggressively” address climate change in their respective homelands following US withdrawal from the agreement.

In June, the inaugural Henry A. Wallace Award and a $US 250,000 prize was presented to the Standing Rock Sioux Tribe for “unyielding courage” in the fight against the Dakota Access Pipeline, and their dedication to transitioning to renewable energy.

The award was established to recognise “the extraordinary courage and will it takes to stand up to oppressive corporate and political power”, and is named for Henry A. Wallace, a visionary and progressive advocate who served as the 33rd Vice President of the US under President Franklin D. Roosevelt.

Cronin said the solidarity experienced at Standing Rock had helped youth, men and women find their voices and warrior spirit. She said:

We’re seeing that now across the country. We have other resistant camps and occupations going on, fighting pipelines and fracking. We are seeing that strength in our own people finding their passion, they’re finding that urgency. They’re calling on those warrior spirits to be there for Indian country, to fight for one another, to fight for Mother Earth.”

Cronin described how her experiences at Standing Rock had also been transformative personally. 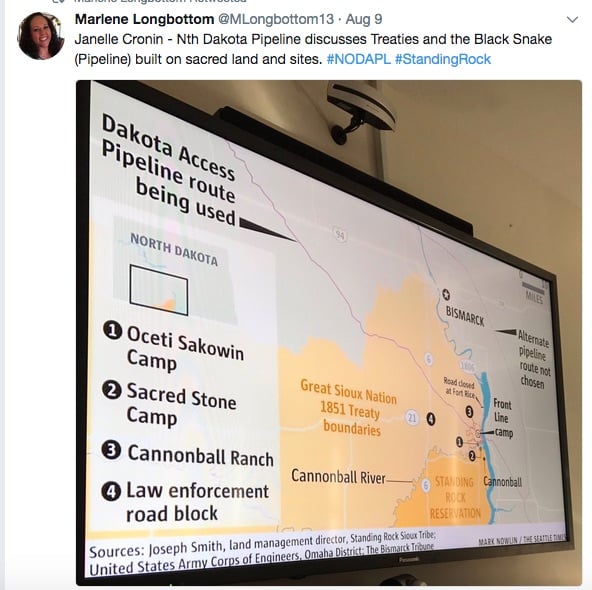 A year ago, she would have struggled with public speaking or interviews.

“Now you fast forward to, I’m here in Australia and sharing my story, I’m passionate and I can feel that strength in my voice,” she said.

“I can finally honour my name, of She Who Goes to War, because that is my warrior spirit.”

Cronin told of two prophecies passed down by her people: the first told that a black snake would come, poisoning everything it touched, and that the only way to defeat it would be if many Red Nations joined to fight it. She said:

In our lifetime the black snake turned out to the Dakota Access pipeline. So that’s what we were doing up there in North Dakota, fighting the black snake. The other prophecy shared with us was that Seven Generations after Wounded Knee, there would be a generation that would stand up against capitalism and fight for Mother Earth. That is our generation.”

Wamego said his message to people in Australia was:

Marlene Longbottom, a Research Fellow at ASHRI, said an important part of the visit had been providing opportunities for Cronin and Wamego to connect with country, culture, local Aboriginal communities and to heal.

It’s really important to understand the trauma that people were exposed to at Standing Rock; the pictures and video demonstrate the level of violence that native people encountered. That has had a major effect on young peoples’ mental health and wellbeing; it’s important that we take care of each other in these movements.

The people who were up there at Standing Rock were very brave and very courageous … it’s really important that we understand the health and wellbeing aspects as people are now being diagnosed with PTSD and the after effects of those traumatic incidents that were seen globally through social media.”

Cronin hopes that the connections being forged between Purdue and University of Wollongong and Aboriginal services are emblematic of a wider coming together of Indigenous peoples globally. She said:

We need to unite. We need to share our stories, share our experiences, share our problems and the difficulties we are trying to overcome; we are so similar in many ways; we are facing some of the same issues, lack of recognition of our rights.

A lot of us are living in fear within our own home countries, facing issues of police brutality, of food insecurity, of extreme levels of poverty on reservations, on reserve. If we are to unite and hear each other, help each other, bring our strengths from each of our home communities and countries, we can actually change the world, we can work together and be that change we want to see; its our chance to fight for Mother Earth.”

Reflecting upon her time spent with Cronin and Wamego, Marlene Longbottom said:

The activism and movements of resistance demonstrate a push back to the social injustices and inequities that we as Indigenous people experience globally.

As with other political movements, we are now in a time of resurgence, of momentum with Indigenous people, African American people, People from the African Diaspora and People of Color globally claiming the space and taking a stand against white supremacy.

What we see today in Australia and the United States, for example, are people who have been historically oppressed for many hundreds of years, challenge the status quo by having a voice and doing what is right; defending land, protecting water and rallying together in an uprising against the stranglehold of the oppressors.”

Listening to the stories shared by Cronin and Wamego made me reflect (as a non-Indigenous journalist) upon the contrast between the language and work of solidarity and resistance, versus the language and focus of so much public health work around prevention and health promotion.

Their stories also were a reminder that the aftermath of such traumatic events continues long after they have disappeared from the headlines, and that much of the vital support in times like this comes from within communities rather than from formal services.

Finally, their stories were a reminder that as so many of our political leaders and systems are failing us in responding to climate change and wider environmental degradation, Indigenous peoples and Indigenous knowledges have so much to offer.

Take the time to listen to Cronin and Wamego below, and you can read more about Standing Rock here. 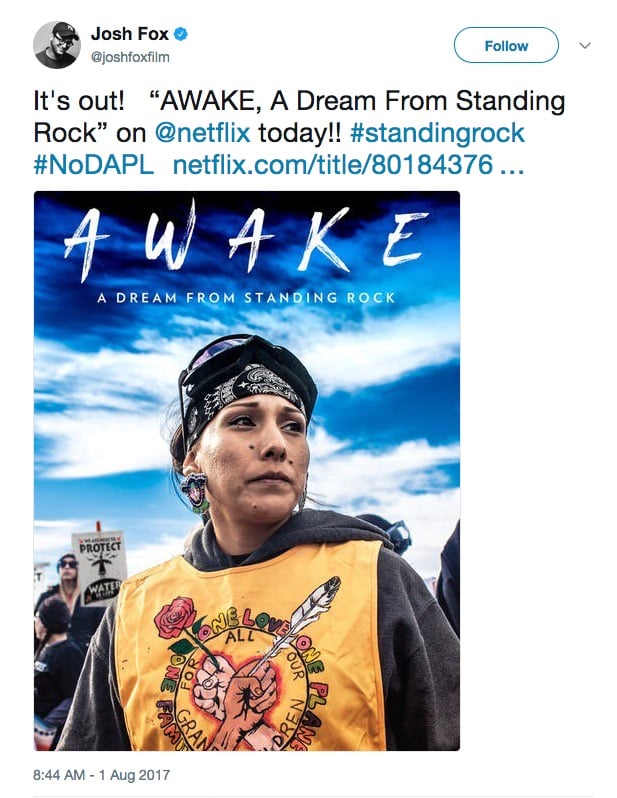 Also, see this song and clip by Prolific The Rapper:

See also this 2016 clip of Janelle Cronin giving a presentation.

Final stages of an epic walk

Meanwhile, this week Clinton Pryor, who visited Tharawal Aboriginal Corporation a few days ago, will be walking through the Southern Highlands on the final stages of his walk into Canberra, after leaving Perth almost a year ago. He is pictured below with Dr Tim Senior, a GP and a contributing editor at Croakey. 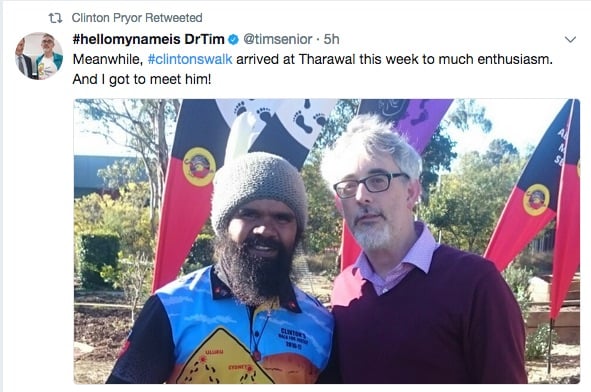 “If you can’t walk and you see Clinton on the road, be sure to say hello and give him respect and encouragement,” says the group’s chairperson, Kim Leevers.

Thanks to The Quo – @thequoau – for permission to post this clip below.

Read the story in The Saturday Paper here.