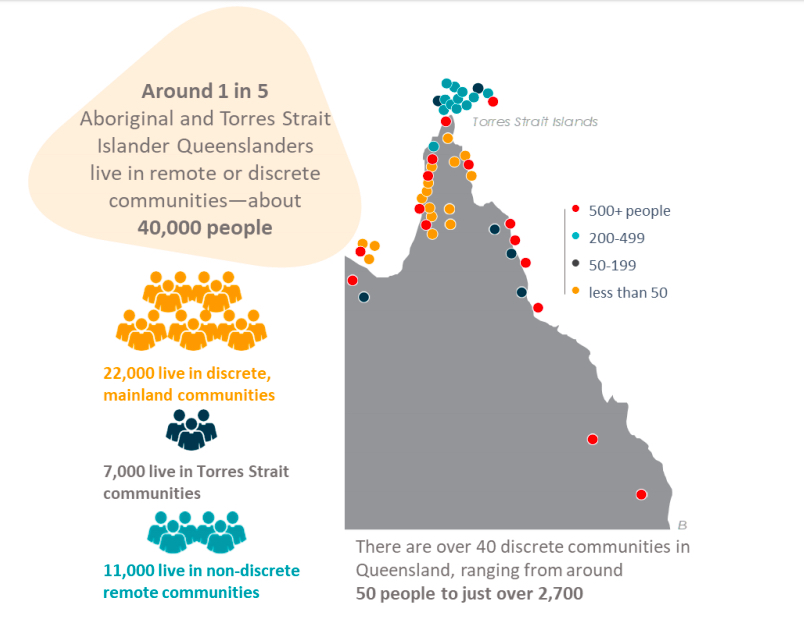 Service delivery to Queensland’s remote Indigenous communities was “fundamentally broken” and in need of a radical rethink, the state’s Productivity Commission has found, calling for sweeping structural, economic and logistics reform.

The Queensland Productivity Commission was scathing in its final report into service provision to the state’s remote and discrete Indigenous communities, finding a paternalistic system plagued by inefficiencies which fostered passive dependence and undermined outcomes.

“There is a strong commitment from government, service providers and communities to address the complex and longstanding issues facing remote and discrete communities, but the system they are operating under is fundamentally broken,” the report states.

It calls for “substantial and ambitious” reform across structural, economic and logistic domains to place accountability and decision-making with communities, refocus delivery on real needs and priorities, and build capacity so that Indigenous people benefit most.

“The potential benefits are large, both in terms of improving wellbeing in communities and the savings that could be directed towards activities communities value most highly,” it says.

Led by Professor Bronwyn Fredericks, who is UQ’s Pro Vice Chancellor for Indigenous Engagement and a Murri woman from South-East Queensland, the inquiry examined service delivery in more than 40 remote and discrete communities across the state.

Despite state government spending totalling some $1.2 billion every year (roughly $29,000 per person) in service delivery, the inquiry found outcomes for people in these communities compared poorly with other residents of the state, as the graph below shows. 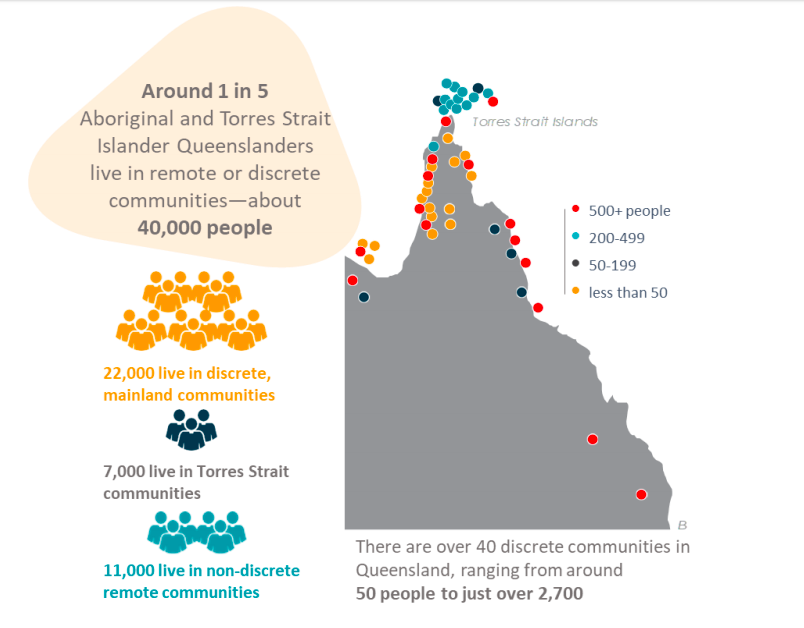 When it delved into service delivery to these communities, the Commission found that “framework-level issues contribute to suboptimal outcomes”, with a complex, labyrinthine system of funding and governance that disempowered and discounted Indigenous communities.

These Byzantine arrangements meant at least 13 Queensland state government departments as well as the federal government were involved in coordination, policy development and service delivery for any given community, as well as a host of peak bodies and NGOs also funded from the public purse.

This resulted in “overlaps in roles and responsibilities, unclear lines of accountability and difficulties getting things done, particularly when the challenges associated with delivering services into remote locations are added to the mix,” the report says.

Inefficiencies were endemic, with infrastructure built that was not fit for purpose; services funded and provided that did not match local demands or priorities; high indirect and ancillary costs and excessive compliance burdens or other red tape.

These communities found themselves trapped in a recurring policy cycle of service delivery failures and patchwork solutions, where the government was little more than a modern-day mission manager who “essentially ‘operates’ the community: individual choice, markets, rewards and responsibilities have a limited role”, the report said.

This served to distort incentives, not just for service users (by “rewarding” welfare dependency), but also the government (through a bias towards “visible action”) and providers (who perpetuated these sorts of services in order to win funds). It resulted in short-term approaches that offered “no or limited alignment between decision-making and accountability to service users, communities, government or taxpayers”, as well as significant transactional costs and red tape.

The net outcome was a system “so large and bureaucratic that it risks serving itself rather than communities”, the report found.

Community at the centre

The report, which was made public on Monday, some six months after being handed down to the Queensland government, offers 22 overarching recommendations for reform touching on a range of issues.

Land administration was identified as being a major barrier to economic development, home ownership and service delivery, and the report offered some practical steps to address this including the transfer of deed of grant in trust (DOGIT) to Aboriginal freehold, facilitation of Indigenous Land Use Agreements (ILUAs), and the establishment of a functioning rates system for Indigenous councils.

The report also called for the transfer of property and tenancy management to community control; for infrastructure funding to include whole-of-life costs with greater long-term funding certainty; local knowledge and expertise to be utilised during planning and construction, and capacity-building — including training and mentoring — within communities, particularly around the building and maintenance of community infrastructure such as roads.

It said economic reform should mean an end to “crowding out” of local opportunities in spaces such as community stores.

Some other ideas of interest in the report:

Though only dealing specifically with Queensland communities, the report offers valuable insights and a framework for improved service provision to remote communities across Australia, including in Western Australia and the Northern Territory.

On health and wellbeing, the report specifically recommended a greater focus on prevention and early intervention, including strategies to address the socioeconomic determinants of health, and gaps in suicide, foetal alcohol syndrome disorder and disabilities.

Services should be informed by data and individual and community input, with an emphasis on accessibility, cultural appropriateness and effectiveness; attracting, retaining and growing the health workforce, particularly Aboriginal and Torres Strait Islander health workers; improved collaboration with the non-government sector, particularly ACCHOs; streamlined pathways and access to mental health and substance use services.