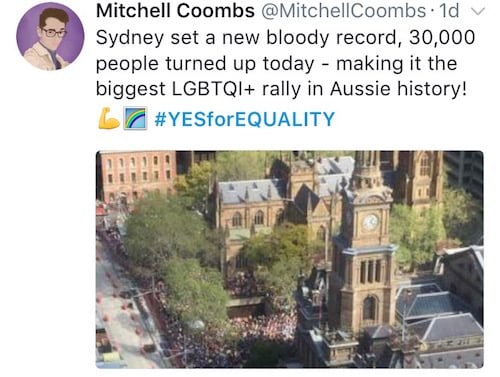 Supporters rally in the slow march to marriage equality

As Australia Post begins the mail-out of same-sex marriage voting forms, there are reports today that the parliament will, later this week, move to approve measures to prevent “vilification, intimidation, or threatening to cause harm on the basis of the sexual orientation, gender identity, intersex status or the religious convictions” during the survey period. Breaches will incur fines and court injunctions.

The move is not before time, with a statement yesterday from the National Mental Health Commission warning that the marriage equality debate had heightened discrimination against Lesbian, Gay, Bisexual, Transgender, Intersex and Queer (LGBTIQ) people, which had alarming potential negative health impacts “on individuals, couples and families who face scrutiny and judgement.”

Many of Australia’s peak health groups have articulated their support for marriage equality, including a 35-member-strong coalition, highlighted in this post back in August. They now stand available to encourage and support LGBTIQ people who are feeling the strain of having their legitimate place in society open to public scrutiny, criticism and debate.

That “debate” would soon degenerate into demoralising, harmful hate speech if the public were asked to participate in a plebiscite (or, as it turned out, a survey) was predicted by many of the same groups, but nobody is taking pleasure in being correct.

Meanwhile there were marriage equality marches in Brisbane and Sydney over the weekend (Melbourne got on with theirs two weeks ago), with the Sydney crowd estimated to have reached 30 000 enthusiastic supporters of LGBTQI rights. There’s a selection of tweets from the events posted below.

And do pop over to this post from Amy Coopes, on how to provide practical support during the marriage equality campaign. As of yesterday’s update the #YesWithLove campaign had raised $45 000 for organisations working at the frontlines with LGBTQI+ kids and families during the next few months.

Finally, for kind words in unkind times, have a look at this short video. If there is any upside to the many difficult conversations going on around the country it is that they provide an opportunity for families and friends to express our love, respect and admiration for each other, and our unqualified support. There’s no more important time to do that, than now. 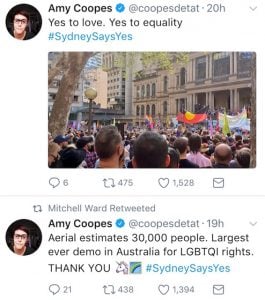 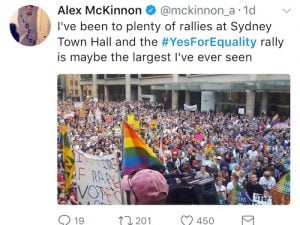 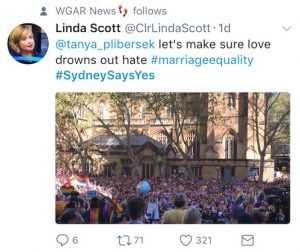 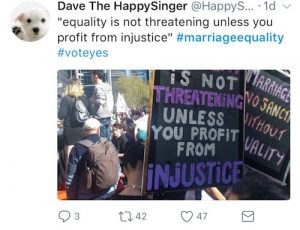 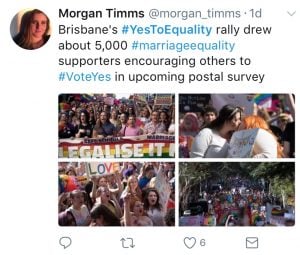 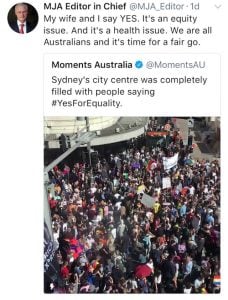 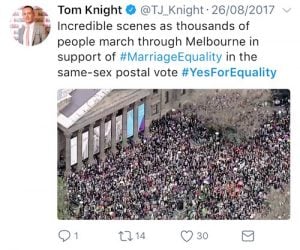 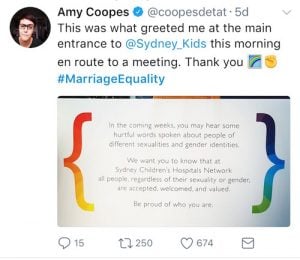 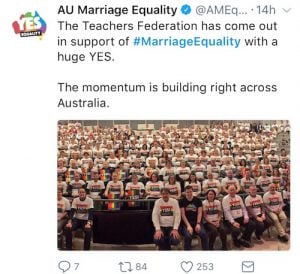 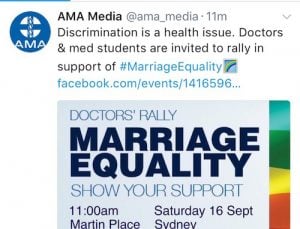 Full text of the statement from the Mental Health Commission:

The National Mental Health Commission has expressed concerns about the detrimental mental health impacts of the marriage equality debate.

“Despite the fact the majority of Australians are supportive of LGBTIQ people, unfortunately unacceptable sentiments are being expressed around the debate,” Professor Fels said.

“LGBTIQ people have been experiencing damaging behavior in their workplaces, communities and in social and traditional media.

“The Commission is alarmed about the potential negative health impacts these debates are having on individuals, couples and families who face scrutiny and judgement.”

“The mistruths being expressed around marriage equality are making some people feel anxious and depressed,” Mrs Brogden said.

“This is despite proof that international studies show marriage equality has positive effects, improving the health outcomes, mental and physiological, for LGBTI people.

“For example, same sex marriage policies are associated with a reduction in the proportion of high school students reporting suicide attempts, according to research in America.

“Research confirms children raised in same sex parented families do as well emotionally, socially and educationally as their peers from heterosexual families.”

Mrs Brogden said that it is everyone’s responsibility to treat people with respect and care in their community during this sensitive time.

The Commission maintains that the mental health and wellbeing of the LGBTIQ people should be at the heart of any debate about marriage equality.

Click here to view the Commission’s Statement on Marriage Equality.