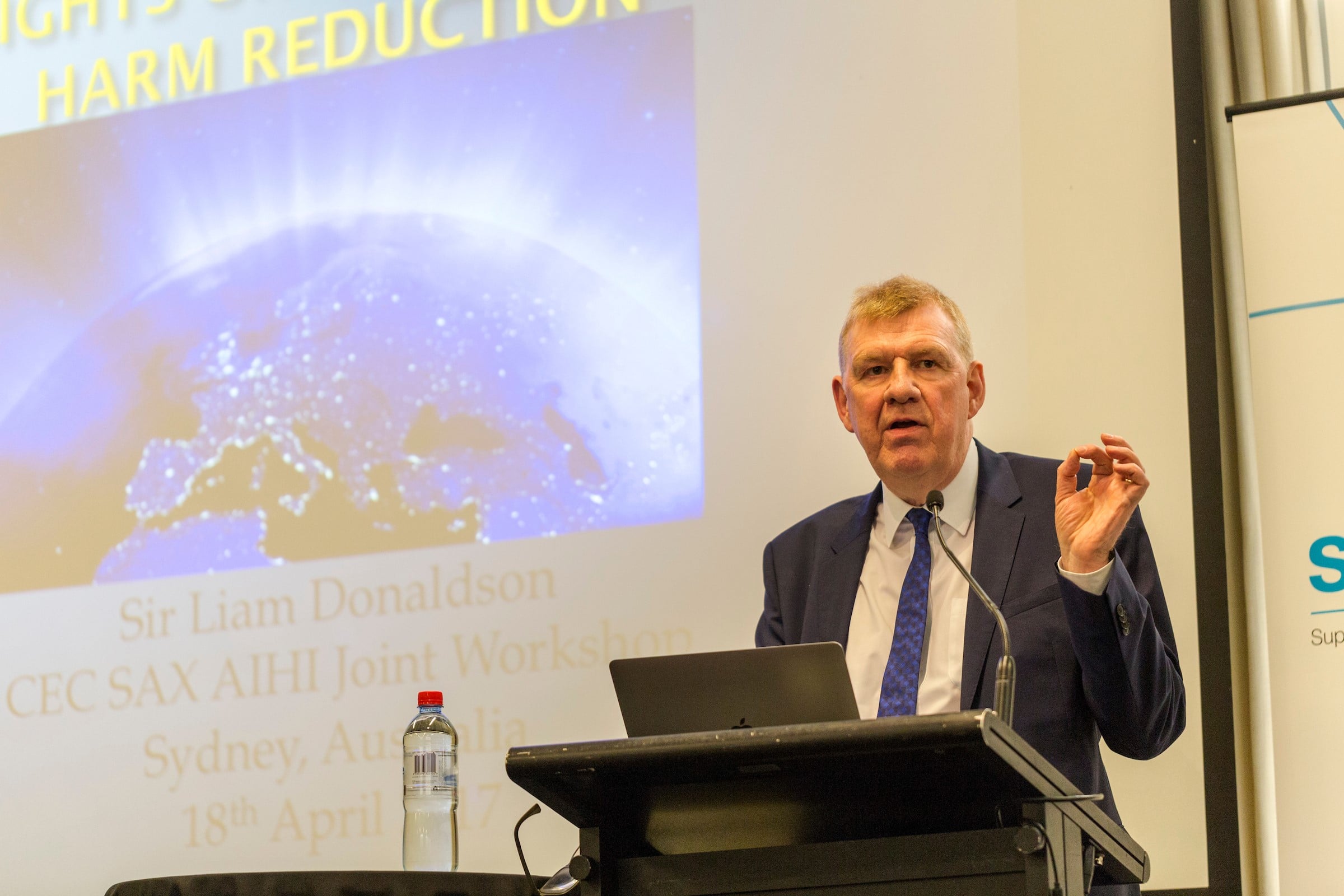 The need to tackle patient safety in healthcare has been clear for almost two decades. Major efforts have been made globally to address patient safety in hospitals and reduce harm to patients and yet, research still shows about one in 10 episodes of hospital care result in harm. Despite the best of intentions global efforts to tackle the problem have not resulted in widespread improvement.

A seminar hosted by the Sax Institute, the Australian Institute of Health Innovation at Macquarie University and the Clinical Excellence Commission (CEC) in Sydney this week brought together leading experts in the field of patient safety, including WHO Envoy for Patient Safety Professor Sir Liam Donaldson, to explore ways forward to ensure patients remain safe when they undergo care in our hospitals and healthcare institutions.

“I have two main points to make,” he told the seminar. “The first is that harm is very extensively distributed in healthcare systems around the world, ever since we started measuring it properly 15  to 20 years ago.

“The second is that there are very few demonstrable improvements either in the nature of that harm or its quantity and there are very few examples indeed of any specific areas that are error prone that have been completely eradicated.”

Sir Liam recently launched the third WHO Global Patient Safety Challenge which aims to halve severe, avoidable, medication-related errors in five years. At the seminar, he detailed three UK cases of medication error to demonstrate the human tragedy involved, and to show how easily errors by busy health professionals can have life-changing or even fatal impacts on patients within busy, complex and frequently stressed healthcare systems.

In one case, which he described as “harm by pen”, a hand-written drug dose abbreviation was misread, resulting in a baby receiving a 10-fold, fatal dose of medication.

While some “enlightened” hospitals had banned the use of abbreviations entirely to reduce the risk of such error, he said abbreviations were still used in most hospitals and could still create risk.

Technological solutions like barcodes on medications were another measure that could reduce the risk of patients being given the wrong dose or the wrong medicine, he suggested.

While the individual cases clearly showed the human tragedy of healthcare errors, creating sustained improvement in the current system had so far proved elusive, he said.

Hierarchical attitudes in medicine could also increase risk of patient harm, Sir Liam said, with junior staff generally feeling reluctant to question the direction or decisions of their seniors, even when they feared patients were at risk of harm.

He said a similar problem was highlighted in the airline industry, where accidents or near-misses had been found to occur when co-pilots were reluctant to challenge senior pilots. The industry had overcome the problem by getting rid of the hierarchy, he said.

“Hierarchy is alive and well in healthcare and it needs to be addressed in a similar, robust way,” Sir Liam said.

He also urged sustained and increased support for research, saying investigations needed to focus not only on individual incidents and on systemic aggregation of incidents to uncover patterns of error, but more research was needed into the least severe category of incidents, where there had been little or no harm to patients. By studying the “near misses”, it could lead to measures to prevent more severe accidents, he suggested.

“A weak signal of failure needs a strong response,” he said.

Finally, Sir Liam urged a “new breed of patient safety geeks” to investigate patient safety incidents and come up with solutions, much like the airline safety geeks he had witnessed dissecting near misses or accidents to ensure they didn’t recur.

“We need that same sort of fascination – we need more people to be curious and fascinated and enthused and to talk with their colleagues about how to solve these problems.”

Director of the Australian Institute of Health Innovation Professor Jeffery Braithwaite told the seminar that it was “astonishing” that “we get it (patient safety) right 90 per cent of the time” in a complex, adaptive health system.

“We’ve looked at the 10 per cent where harm occurs, but in a system that is so complex, 90 per cent of the times things do go right. We’ve hardly ever researched how the system delivers safe care. Surely we need to understand how things go right and how we do produce good care so frequently”.

Professor Braithwaite said previous research by the Institute had focused on the flipside of patient harm, looking at how often the care that was delivered was in line with evidence or guidelines. The Caretrack study published in 2012, showed that Australian adults received appropriate care just 57% of the time, he said.

While that didn’t mean the other 43% of care was “bad”, he said the percentage of care that was in line with guidelines needed to increase. The AIHI was now undertaking a similar study of paediatric care, as well as studying whether hospitals that were better organised in terms of safety and quality initiatives actually delivered better outcomes, he said.

Acting safely in the context of uncertainty

Professor Emily Banks, Scientific Director of the Sax Institute 45 and Up Study and former Chair of the Advisory Committee on the Safety of Medicines, highlighted the value of data to reduce the risk of harm from medications.

“No medicine is risk free,” she said. “We need to act safely in the context of uncertainty”.

She said after a drug was approved for public availability, it was vital to collect data and to “set the bounds of safety”.

An absence of evidence about harmful effects of a medicine didn’t equal evidence of safety, she noted.

“Often you are trying to prove a negative – an absence of adverse events,” Professor Banks said.

“The post-marketing period is when large, scaled data and linked data come into their own. It is very important to have independent data on medication safety and there is a huge onus on the health system, health professionals and public to report adverse drug reactions.”

Creating the right culture for improvement

Ms  Carrie Marr, chief executive of the Clinical Excellence Commission (CEC) which  promotes and supports improved clinical care, safety and quality across the NSW public health system, told the forum the challenge was to ensure the habits of safety and reliability were “in the DNA” of every organisation and every team member in the health system.

She said the CEC was looking at how to create understanding and ownership of quality and safety as a “systems property” ‒ or something that the health system does every day. It was doing so through three main focuses: organisational leadership; clinical leaders and managerial capacity (an often forgotten part of the system); and team and individual capability, she said.

“We have to think about how to create the right culture for improvement that truly supports learning systems,” she said. “There is a lot to learn from when we do get it right.”