Home Healthcare and health reform abortion That Abetz comment on abortion and breast cancer: symptom of a wider malaise?

That Abetz comment on abortion and breast cancer: symptom of a wider malaise?

But should his comments be seen as an aberration?

There are any number of other areas where the Government’s statements and actions are not informed by evidence.

The most glaring example is, of course, the black hole of climate change policy. 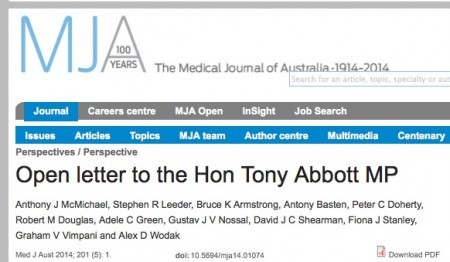 Leading health and medical experts have sent an open letter to the PM, urging him to include human-induced climate change and its serious health consequences on the agenda for this year’s G20 meeting.

The letter, published by The Medical Journal of Australia, states:

“The health of present and future generations is at risk from ongoing human-induced climate change.”

Meanwhile, experts writing in the  latest edition of The Australian and New Zealand Journal of Public Health warn that Federal Budget cuts to primary health care and prevention are regressive and short-sighted.

“Rather than a quick death, this is a budget that is so inequitable it will invariably mean those who are less well-off will be even worse off.  Nowhere will this have more impact than on the poor.

“The Federal Budget was a ‘killer’ in multiple ways and will be for many years to come.  And this is only considering the health cuts.  Cuts in social welfare, Indigenous programs, education funding and the environment portfolio will have major ramifications for health outcomes into the future.”

When it comes to asylum seeker policy, both major parties “wilfully and deliberately” ignore the evidence of the harm caused by their policies, according to a “J’accuse” letter signed by almost 200 prominent doctors, lawyers, academics and refugee advocates.

You can read the letter here. If you wish to sign it, see here.