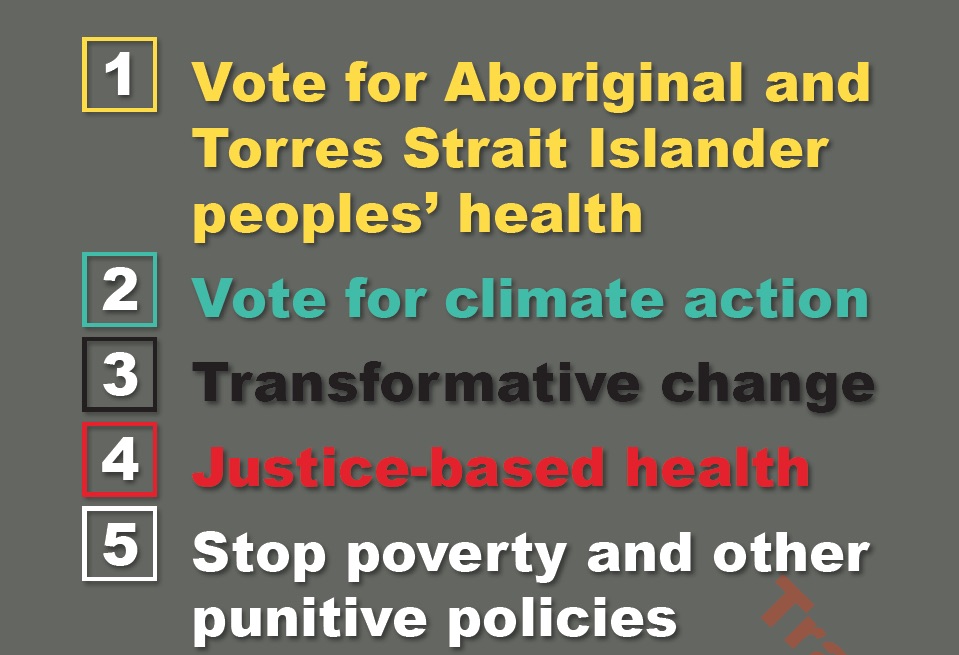 On 8 May, more than 40 health advocates contributed to an 11-hour program for the #AusVotesHealth Twitter Festival, profiling critical health matters ahead of the 2019 Federal election.

The event sought to provide an open platform for wide-ranging discussions that centred health equity concerns, with a focus on moving beyond the silos that so often plague the sector, policy and service delivery.

Just in time for the election, we now launch the #AusVotesHealth Twitter Festival e-publication, which compiles some of the wide-ranging discussions.

For the period of the Festival and its coverage at Croakey (7-14 May), more than 3,000 Twitter accounts participated in the #AusVotesHealth discussions, sending almost 13,000 tweets, and creating more than 80 million Twitter impressions, according to Symplur Analytics.

While health was widely reported to be a key issue during the election campaign, most discussions in the mainstream media were narrowly focused around healthcare, in particular hospitals and medicines.

#AusVotesHealth provided a counterbalance by addressing some of the most important determinants of health and well-being, most of which lie outside of the health care system.

While many Australian media outlets were focused on the costs of climate action (rather than the costs of inaction), news broke that eight European countries had proposed a quarter of the European Union’s budget be spent on tackling climate change.

This highlights the importance of independent media and public interest journalism, such as Croakey, in providing alternative perspectives and counterbalance to the influence of corporate media.

Below we summarise five inter-related messages from the discussions.

The 97 percent of Australians who are non-Indigenous have, through their sheer numbers, the political power that shapes the policies affecting the lives of Aboriginal and Torres Strait Islander people.

Non-Indigenous Australians were also urged to step up in tackling racism, and in working for greater cultural safety of systems and services.

Climate change is a global public health emergency. Many participants argued that this is the most critical health concern that should influence voters’ choices.

Climate action will likely have many other health benefits if it enables healthier food systems, greater use of public and active transport, less air pollution, and social, cultural and economic paradigms that centre planetary health and caring for Country.

Underlying many discussions was the need for transformative change across multiple domains.

We need to transform governance, including electoral reform to stop unhealthy industries buying political influence. We need to empower local communities to implement their own solutions, whether to obesity, alcohol control, climate change or other health concerns.

We need to transform how we talk about and act on health, and focus much more on equity, primary health care and prevention. But we must not fall into the trap of framing prevention as an activity primarily of the health sector.

It means voting, not for one’s own hip pocket interests, but for the wellbeing of future generations. It means reforming systems that are patently unjust, such as the justice system. It means tackling racism and other abuses of power. It means transforming power relations.

It means ensuring the right of people to live with dignity, with access to the building blocks of good health including safe, health-promoting environments (not polluted by junk food and alcohol marketing), secure housing and – especially if they live in rural and remote areas – affordable healthy food.

It means taking deliberate, concerted and proportionate action to reverse the inverse care law. Oral health was repeatedly highlighted as an area of serious injustice. Poorer people need better access to oral health, including dental care – not less, as at present. There can be no justice without an equity lens being applied across all policies affecting health.

5. Stop poverty and other punitive policies

Participants highlighted the many ways that poverty is bad for health. The campaign to increase the Newstart allowance has drawn widespread support, but tackling poverty requires much more systematic and determined action and political will.

It also requires an end to punitive policies that inflict harm on people most in need of support, whether Centrelink and Robodebt, compulsory income management, ParentsNext or the NDIS implementation.

Again, taking a health in all policies approach to social policy would be transformative for efforts to improve health equity.

Of course the five themes above are interconnected and overlapping. That is the point of moving beyond simplistic, narrow discussions about health.

We encourage you to dive deep into the 140-odd pages in the e-publication. They provide a rich and somewhat chaotic record of wide-ranging discussions whose significance will resonate well beyond the 18 May election.