The Croakey Register of Unreleased Documents (CRUD) was first launched in April 2009 with the goal of recording “the details of evaluations, plans, reviews and other such documents that should be released (whether by governments or other commissioning bodies), in the interests of promoting better informed policy, practice and debate.”

Following a hiatus, CRUD is back with a list of unreleased (or difficult to access) documents that have been cited in major Commonwealth Department of Health and Ageing publications this year.

The list will be updated monthly, and publications from state and territory Health Departments and other relevant agencies will also be reviewed.

Croakey readers are invited to suggest documents that they think ought to be made public or more easily accessible, and to help us find those listed on the Register.

The re-launch of the Register is an appropriate time to reflect on and reiterate its value.

CRUD’s guiding philosophy is rooted in Norman Daniels’ call for greater transparency in health policy making processes.  In a BMJ article, Daniels writes that “[a] fair process requires publicity about the reasons and rationales that play a part in decisions.  There must be no secret where justice is involved, for people should not be expected to accept decisions that affect their well being unless they are aware of the grounds for those decisions.”

What CRUD therefore aims to do is to render the reasons and rationales behind health policy making more transparent.  Where a document has been cited as being relevant to a health policy decision, CRUD believes that the document should be easily accessible so that its contents can be analysed, discussed and, where appropriate, used by professional, research, and lay communities.

CRUD encourages government agencies to be proactive in filling the gaps in our health policy making knowledge, in the belief that better informed debates can lead to better policies, and the possibility of a healthier Australia.  One way of doing this is to hyperlink all documents cited in official publications; another is to contact CRUD with copies of Register documents that are difficult to locate, or that have not previously been released.

When it comes to matters of life and death, a full and frank sharing of knowledge is one of our most valuable commodities.

(Click on the table below to see an enlarged version) 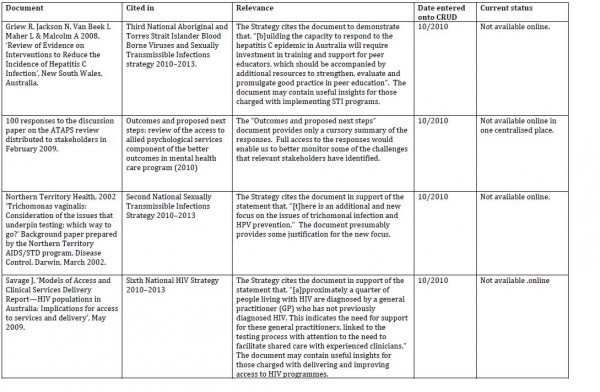 • Daniel Vujcich is a graduate of the University of Western Australia.  He is currently on a Rhodes Scholarship to the University of Oxford where he has completed a Master’s degree in International Development, and now reads for a doctorate in Public Health.  His research relates to the way in which Indigenous Australian health policies are formulated.