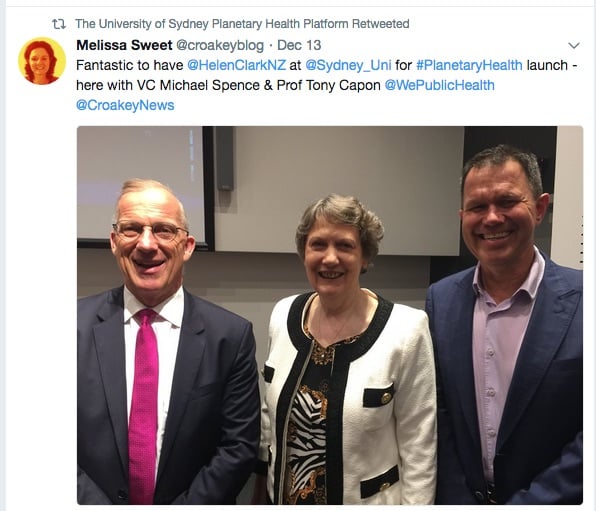 The health of future generations is at stake: Helen Clark

The health of future generations is being mortgaged as a result of environmental degradation that threatens to reverse the health gains achieved over the past century, according to Dr Helen Clark, a global health advocate.

Clark, formerly Administrator of the UN Development Programme and Prime Minister of New Zealand, told the recent launch of the University of Sydney’s new Planetary Health Platform that political will and leadership from civil society and the private sector are needed to tackle the major threats to planetary health – as well as collaborations across silos.

Her speech is published in full below with permission, and is also available at her website.

It is a great pleasure for me to support the launch of the Planetary Health Platform at the University of Sydney today.

Let me congratulate Professor Tony Capon, the world’s first Professor of Planetary Health, and all who have worked with him to establish this world-leading initiative.

Why is it needed? Quite simply because the future of human health and the health of our planet are closely linked. It follows that we need to bring disciplines and sectors together – in the universities and across governments and societies – if we are to address the complex challenges facing both effectively. This new platform at the University of Sydney will contribute to that, by contributing to the evidence base for health and environment-sensitive policy making in Australia and around the world.

The landmark Report of the Rockefeller Foundation- Lancet Commission on Planetary Health in 2015 found that continuing environmental degradation threatens to reverse the health gains achieved over the past century.

I have spent the past eight years in a leadership position in global development, as Administrator of the UN Development Programme (UNDP). I have no hesitation in saying that the Commission’s finding is right.

Indeed, I believe that we can make an even wider assertion: that if we continue to career towards exceeding more planetary boundaries, then on a worst-case scenario, which is sadly not improbable without dramatic change in how we “develop”, improvements in human development overall will slow to a crawl, and there is likely to be regression in Sub-Saharan Africa and South Asia. Modelling to this effect was done for the 2011 UNDP Human Development Report on Sustainability and Equity. I suggest that the “grow now, clean up later” approach is simply untenable.

The Rockefeller-Lancet Report uses the ringing phrase that “we have been mortgaging the health of future generations to realise economic and development gains in the present”. The result is that we have had dramatic adverse effects on the very ecosystems which sustain life on Earth – and which also have intrinsic value.

Thus, development, as we have known it, has been seriously out of balance. The longer we travel that same road, the more we will undermine the development gains, including in health, which we had taken for granted.

Human health in many other places, including Australia will be put at serious risk. It’s ironic that this Sydney University planetary health initiative is being launched today as a heatwave strikes the city – with all the implications that has for society’s most vulnerable members.

We can expect more regular extreme climate events for decades to come – even if the Paris Agreement is fully implemented. 2016 was the hottest year ever reported. Commenting on that in March this year, the head of climate research at the World Meteorological Organisation said that “remarkable changes across the planet are challenging our understanding of the limits of the climate system”, and that “we are now in uncharted territory”.

Among the many implications are those for food production – which is so fundamental to human life and health. We see more regular, very serious drought conditions in the Sahel and the Horn of Africa. When these are combined with other severe stresses like conflict, there is a severe risk of famine. Let’s decode that word – people starve to death.

This has been narrowly averted in Somalia this year with the support of huge international partnerships – but, even so, 6.2 million people are still reliant on relief supplies. The emphasis now must also go on future disaster risk reduction and climate change adaptation – which are two sides of the same coin for mitigating the impacts, including on human health, of severe weather events.

Those who dwell on the low-lying atolls of the Small Island Developing States, and those who live in flood – and hurricane-prone areas anywhere are also at great risk – in this year’s hurricane season in the Caribbean, some islands experienced near total devastation of their infrastructure, and areas of the South East United States were badly damaged. With such shocks, the risks to human health rise exponentially.

As the weather worsens, we will see climate-induced migration from the most exposed areas to drought, storms, and rising sea levels. Much of it is likely to be internal migration, but for an atoll nation with no high ground, that is not an option.

Yet climate change is just one of the identified planetary boundaries we need to be concerned about. Research from the Stockholm Resilience Centre suggests that we have already exceeded two of them – biospheric integrity and nitrogen and phosphorous loading, and have passed the safe operating space of land system change as well as of climate change. Indeed, we have “mortgaged our future” – and that has significant implications for human health.

What is vital is that we see the connections and address holistically the problems we have created.

This is not a new call. As a young Health Minister close to three decades ago, I was inspired by the Ottawa Charter for Health Promotion of 1986. Building on the Almaty Declaration on Primary Health Care of 1978, it spelled out that the fundamental conditions and resources for health were: peace, shelter, education, food, income, a stable ecosystem, sustainable resources, and social justice and equity.

That Agenda includes a comprehensive health goal, but it is vital that it is not seen and tackled in isolation. Given that it is widely accepted that we must address the determinants of health, then health actors must join forces with others – as they will in this Planetary Health Platform – to find solutions to health challenges which arise far beyond the purview or competence of health systems – whether they be from poverty, marginalisation, or discrimination; from the aggressive marketing and trade of unhealthy substances and from sedentary lifestyles; or from climate change, biodiversity loss, or toxic pollution.

I am an optimist – and I do believe there are solutions to the challenges we face to both human health and the environment.

But we have to invest in those solutions – in gathering the evidence, building awareness, designing good public policy and implementing it, and supporting the most vulnerable countries and populations to build their capacity for action.

We also need political will – and we need widespread public awareness of both the challenges and what each of us and those who govern us at all levels need to do. We need civil society and private sector leadership – there is a lot of it already, but all need to be on board.

This world-leading university has the capacity to make a difference for planetary health – by building collaboration across its faculties and its major research centres. We all need to come out of our silos and work together on the solutions – that is as true for universities as it is for governments and for communities from the local to the global.

Planetary health is the ultimate silo breaker – all power to the arm of this new platform as it builds the evidence base for enlightened policy and action which will make a difference for the better for health and the environment. 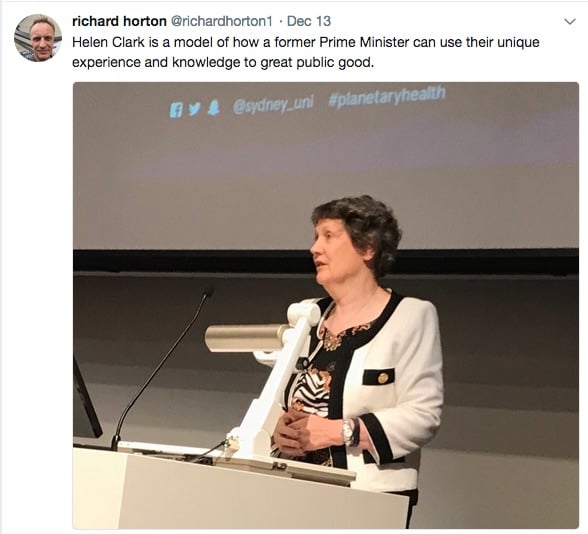 As Clark noted, Sydney was feeling extreme heat on the day of her presentation… 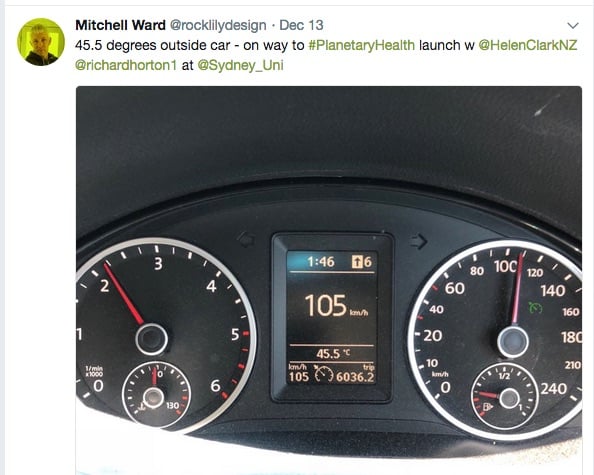 This Croakey article is published as part of an end-of-year mini-series on climate and health.

See the previous articles in the series:

Land clearing – a health threat requiring action and leadership, in the NT and elsewhere

Marking a milestone in the history of planetary health

… and stay tuned for the next article: A call to civil disobedience in the face of a planetary health emergency