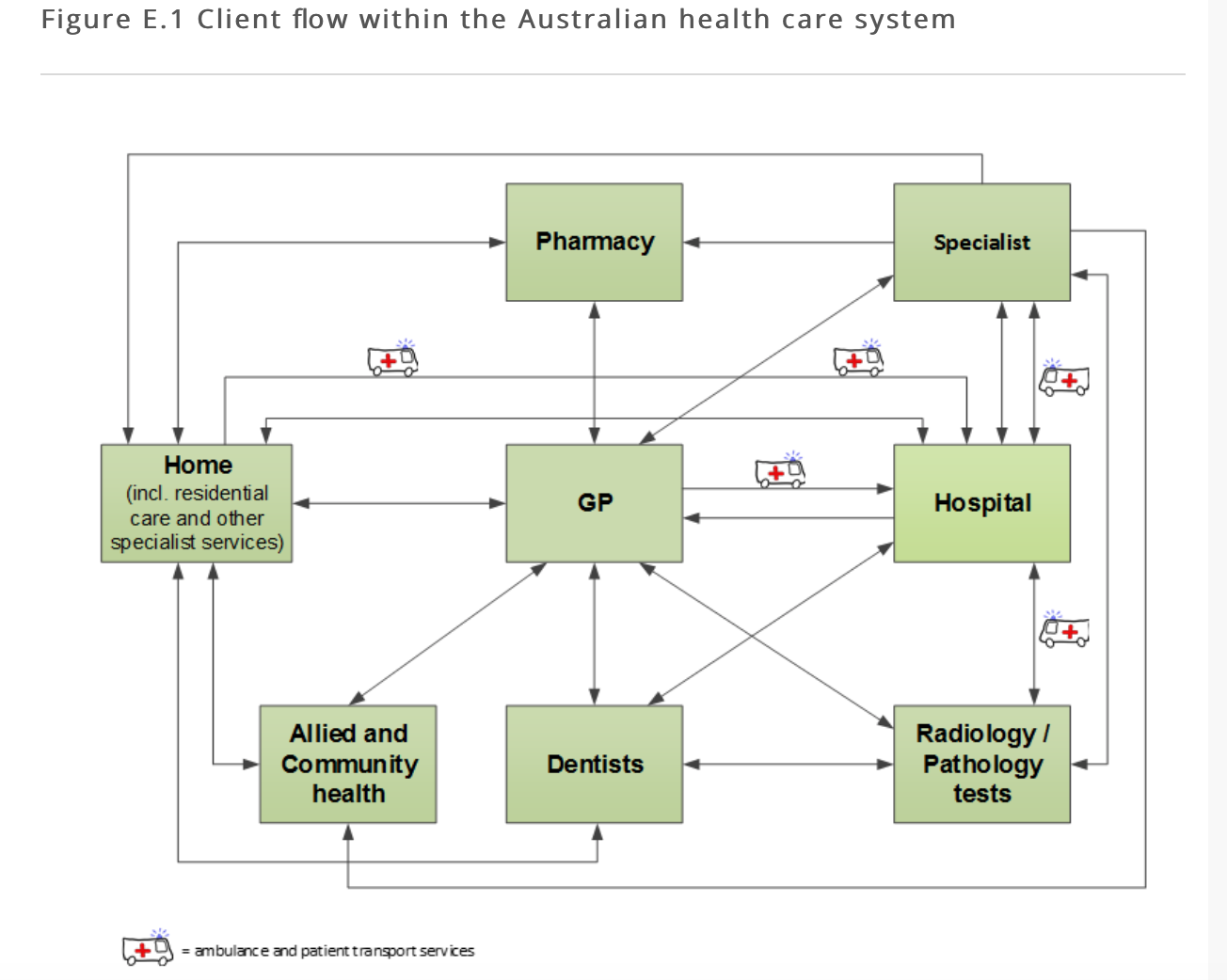 The Report on Government Services – key learnings for the health sector

The health section of the 2020 Report on Government Services (The Report) by the Productivity Commission was released last week.  This annual report provides information on the equity, effectiveness and efficiency of government services in Australia.

The usefulness of the RoGS is in providing a sector-wide, ‘big picture’ snapshot of Australia’s complex health system and in reporting against a consistent set of outcomes over time. This can be useful in highlighting areas in which our health system is performing well, identifying inconsistencies in performance across jurisdictions and signalling some emerging problems that should be on the radar of health sector managers and policy makers.

Croakey editor Jennifer Doggett discusses some of the key learnings from the current report, below.

While this gap clearly reflects the ongoing systemic disadvantage experienced by Aboriginal and Torres Strait Islander Australian in health as well as other sectors, there are some positive indications in the Report that the health system is improving in its delivery of care to Indigenous Australians.

For example, over the ten years to 2018‑19, the proportion of older Aboriginal and Torres Strait Islander people who received an annual health assessment increased by 26.2 percentage points to 37.1 per cent.  This is slightly higher than the proportion of non‑Indigenous older Australians who receive this assessment (33.3 per cent).

Also, while the rate of potentially avoidable deaths in 2014–2018 for Aboriginal and Torres Strait Islander people is still more than three times the rate for other Australians, the Report notes that this rate is the lowest for 10 years.  This is a welcome indication that some progress is being made in reducing inequities in access to care and improving the health and well-being of Aboriginal and Torres Strait Islander Australians.

However, the Report also notes the extremely high suicide rate of 23.7 deaths per 100 000 population for Aboriginal and Torres Strait Islander young people (compared with 2.4 deaths per 100 000 for the general youth population).  This shocking statistic highlights the urgent need to address the drivers of poor mental health and suicide in Indigenous communities and ensure that all Aboriginal and Torres Strait Islanders have access to high quality, comprehensive and culturally safe mental health care.

Public hospitals allocate significant resources to the collection of data so it is surprising that there are still significant gaps and inconsistencies in the data used to assess the performance of this sector.

As the following diagram demonstrates, some of the major indicators of public hospital performance cannot be effectively measured or compared across jurisdictions because the data is either not available or not compatible or (in some cases) outcome measures have not been developed. 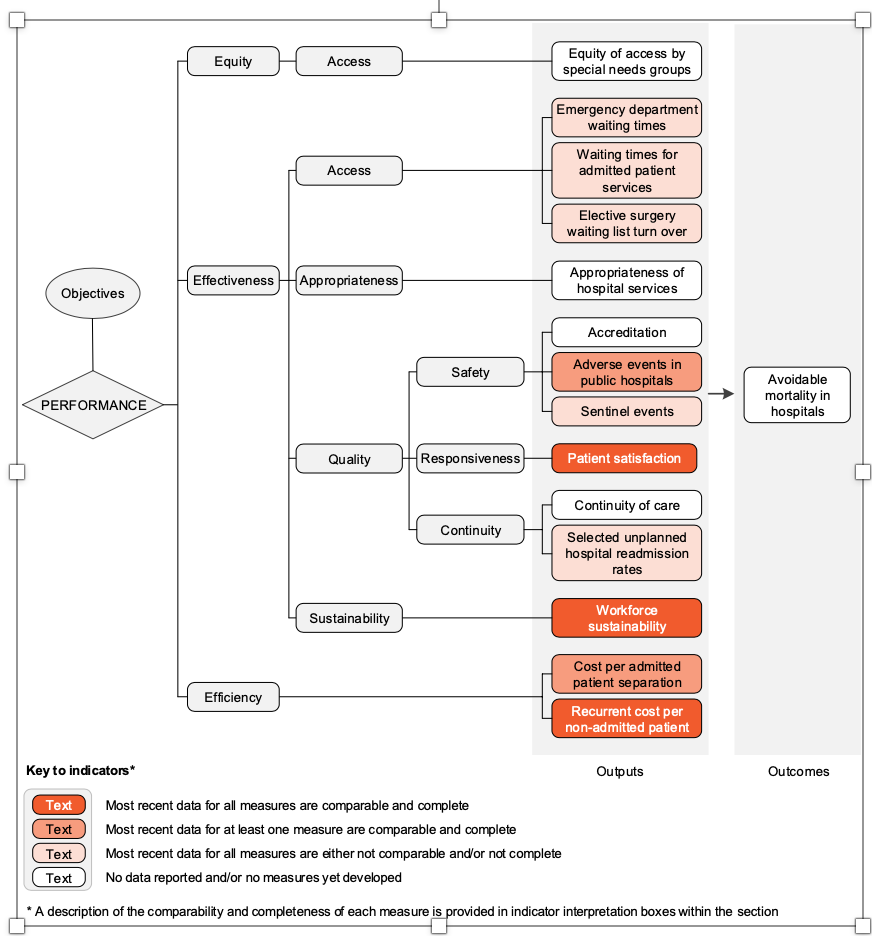 In fact the Productivity Commission has complete and comparable data for only three out of the 14 indicators used to measure public hospitals’ performance.  This means that important indicators, such as appropriateness of hospital services, continuity of care and unplanned readmission rates can either not be measured or that performance against these criteria cannot be compared between jurisdictions.

The inability to report against the “Equity of access by special needs groups” is particularly concerning given that it is the only indicator measuring hospitals’ performance against the “equity” and “access” outcome measures.

Another data-related issue arising out of the Report is the need for robust and appropriate outcome measures for ‘continuity of care’. Continuity of care is a complex concept which can look very different depending on the needs of individual patients.  This makes it challenging to measure and the Report highlights this issue in two health sectors.

As indicated in the diagram above, the Commission was not able to measure continuity of care within the public hospital sector at all.

In primary health care, the Report defines ‘continuity of care’ as the proportion of GP management plans and team care assessment plans that have been reviewed in the past 12 months.  However, as noted in the Report, this indicator measures only one aspect of continuity of care and also does not measure a patient’s experience of care.

Continuity of care is an increasingly important component of health care given our fragmented health system and the rising rates of people in the community with chronic and complex conditions.  Without appropriate outcome measures it is difficult for governments to direct funding to this area and also to assess whether consumers’ experience of continuity of care over time and across different care settings is improving.

This highlights the need for the development of consumer-centred outcome measures which capture the breadth and diversity of needs that fall under the ‘continuity of care’ umbrella, rather than rely on process-centred indicators, such as the number of care plans reviewed.

However, it also makes clear that we still have some way to go in preventing and managing chronic disease.  In both diabetes and asthma management the Report identified significant room for improvement.

A written asthma plan was the main indicator used to measure performance in managing asthma.  The Report found that nationally in 2017-18, the age-standardised proportion of people with asthma reporting that they have a written asthma action plan was only 32.3 per cent.  This is a significant improvement from 28.4 per cent in 2014‑15 but still represents less than a third of all people with asthma.

The significant difference in participation in these population health programs suggests that it may be useful to look at how our approach to childhood immunisation could be applied to cancer screening in order to bring participation rates up to target levels (70 per cent in the case of breast screening) and support the broader aim of reducing the burden of these cancers on individuals and the community.

The Report also identifies other barriers to access, including reporting that 18.8 per cent of people who saw a GP for their own health waited longer than they felt was acceptable to get an appointment.

It is important to remember that there is likely to be considerable overlap in the populations affected by cost barriers for different health services, i.e. that the people experiencing problems affording GP services are also likely to have problems affording medicines. This is important as these barriers can intersect to compound the disadvantage experienced by these groups and therefore need to be addressed via consumer-centred strategies rather than ‘top down’ provider-centred approaches which deal with health programs and services in isolation.

The need for better workforce planning, particularly in the primary care sector, is highlighted in the Report by the figures on age of the health workforce.

The Report states that in 2018-19, 37.0 per cent of full time equivalent (FTE) general practitioners were aged 55 years or older, compared to 10.6 per cent who were less than 35 years of age.  This signals a looming shortage of GPs as this older cohort reaches retirement age without sufficient numbers of younger practitioners to replace them. This shortage is even more serious than the numbers might suggest as given changing work patterns and expectations among younger GPs we actually need more than one young GP replacement for every older GP leaving the workforce.

The workforce situation in the hospital sector is not quite as grim as only 15.4 per cent of the FTE medical practitioner workforce and 11.9 per cent of the FTE nursing workforce are aged 60 years and over, reflecting a small increase across the most recent 6 years of reported data for nurses and medical practitioners.  For nurses, there was a corresponding increase over the most recent 6 years in the proportion of the workforce aged under 30 years which should offset the loss of older nurses due to retirement.

The presentation of hospital statistics from each state/territory in a common format in the Report makes it clear how much variation there is between jurisdictions in key areas.

For example, the table below shows the variation in the rates of falls across the states and territories (ranging from 1.7 per 1000 separations for the ACT ad 7.5 for Tasmania)

Separations for falls resulting in patient harm in public hospitals, 2017-18 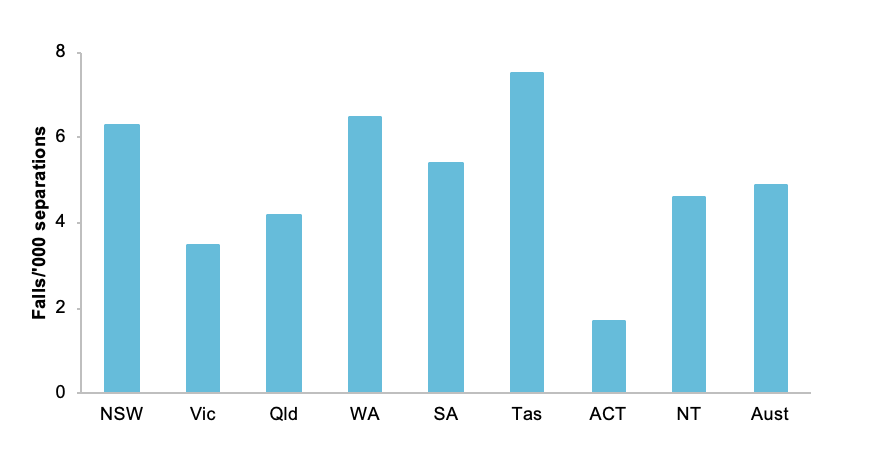 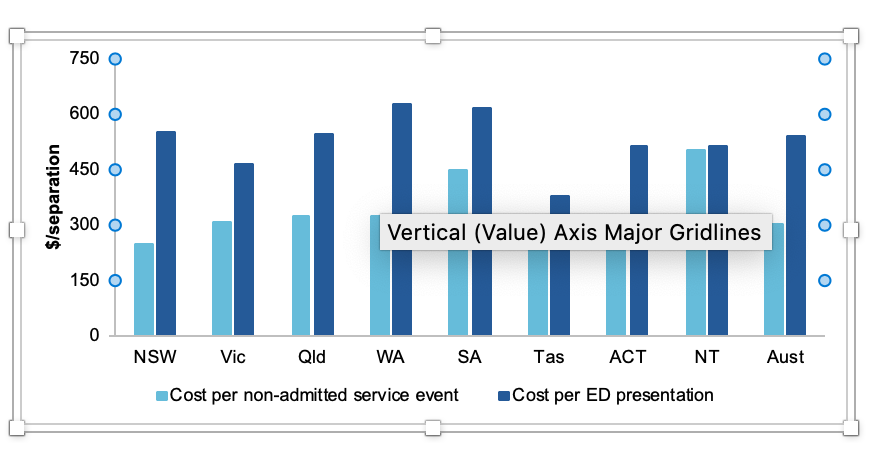 These variations in cost and performance raise questions about the uniformity of hospital services across the country and challenge accepted Medicare principles of universality. They also highlight the importance of national organisations, such as the Australian Council on Quality and Safety in Healthcare, in promoting best practice and supporting quality improvement processes across jurisdictions.

As the graph below demonstrates, this contrasts with the pattern of use of State and Territory government-funded mental health services which has remained relatively constant over this period. 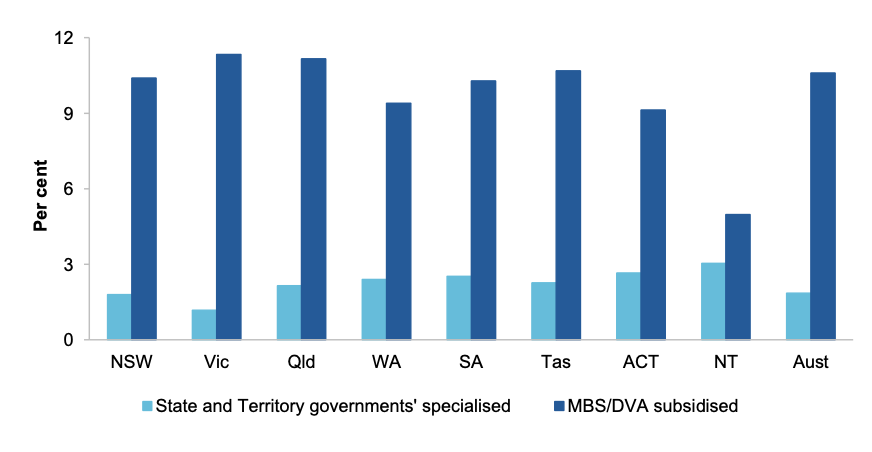 This data confirms the findings of other research into this area, such as the recent report from the Royal Australian College of General Practitioners  which found that mental health issues are the most common single reason patients are visiting their GP.

It adds weight to the call from mental health experts and stakeholders, Dr Sebastian Rosenburg and Professor Ian Hickie, for an evaluation of the Better Access program to assess whether this program represents the best use of mental health funding.

Despite a longstanding (since 2005) national commitment to reduce the use of restrictive practices within the mental health sector, seclusion and restraint continue to be used by some mental health services. The Report states that nationally in 2018‑19, the rates of seclusion and physical restraint were 7.3 and 11.3 per 1000 bed days respectively and the rate of mechanical restraint was 0.6 per 1000 bed days.

This represents an overall decrease in the use of these practices the past decade, for example the rate of seclusion per 1000 bed days has decreased from 13.9 in 2009‑10. However, it concerning that the 2018-19 figures represent a slight increase from 6.9 in 2017‑18, and that the increase in the use of seclusion in child and adolescent units was the highest rate since 2012‑13. These figures highlight the need for ongoing effort to reduce these practices in all areas of mental health care.

Health Minister Greg Hunt identified Australians who have been discharged from hospital after a suicide attempt as a key target group of his recently announced $64 million suicide prevention package.

One focus for this new funding might be to increase the rates of follow-up for people being discharged from hospital psychiatric units. The figures in the Report indicate that currently the rate of community follow up for people within the first seven days of discharge from an acute inpatient psychiatric unit is 75.2 per cent nationally (in 2017‑18).

While this is a significant increase from 46.9 per cent in 2008‑09 it means that a quarter of people leaving hospital after inpatient psychiatric treatment still do not receive timely follow-up in the community, placing them at increased vulnerability, including higher risk for suicide (as stated in the Fifth National Mental Health and Suicide Prevention Plan, 2018).