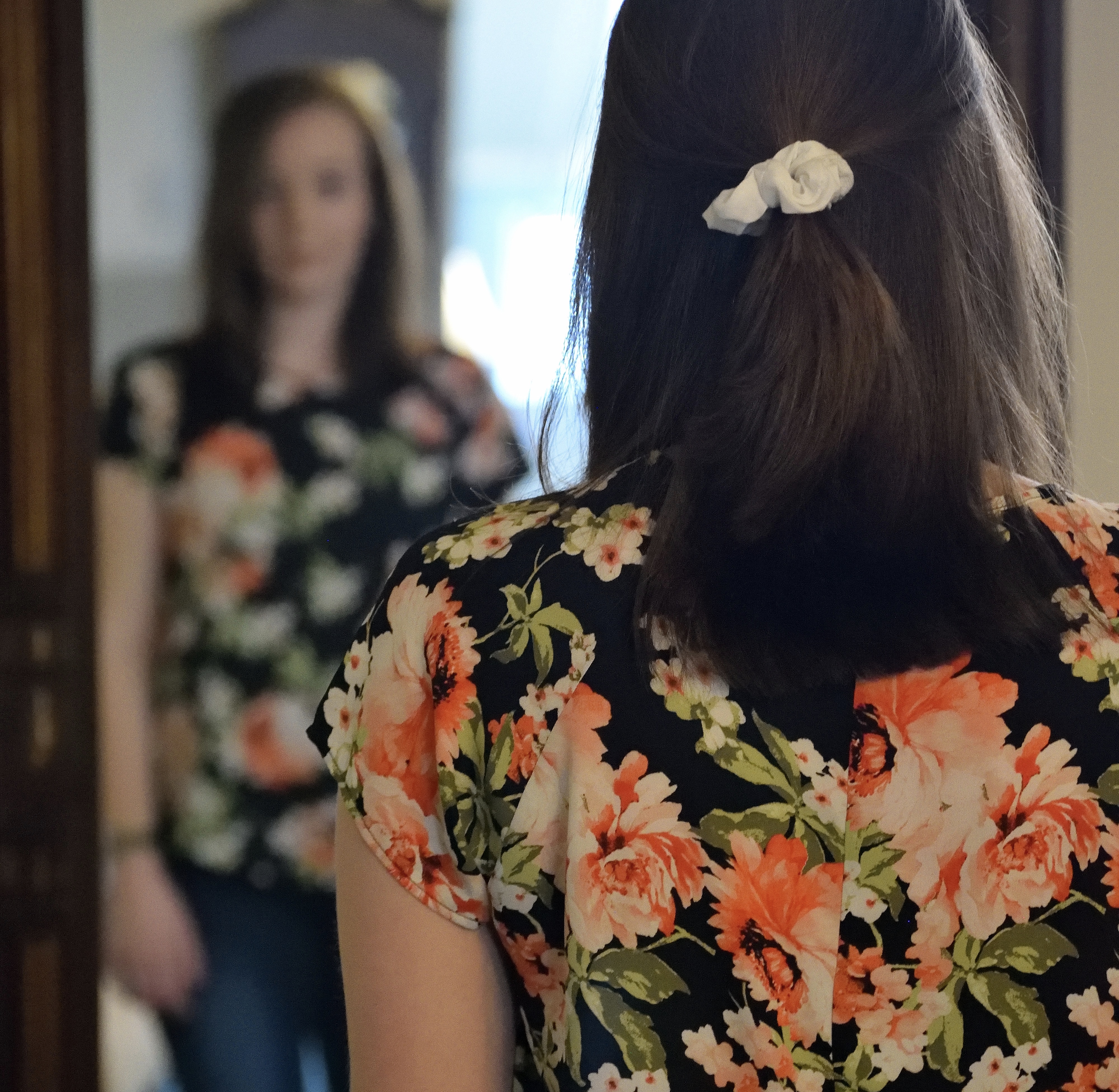 The unattractive truth about misogyny in medicine and medical research

Introduction by Croakey: In recent weeks, a little known 2012 study, conducted at an academic hospital in Milan, Italy and published in the specialist medical journal, Fertility and Sterility, found an audience on social media, and not in a good way.

The participants in the study were told various “phenotypical variables” would be evaluated, but not the study’s full hypothesis relating to attractiveness (in case of the Hawthorne-like possibility that they would engage in “unintentional seductive behaviors”).

If you’re wondering about the clinical relevance of this finding, you’re not alone. Outspoken Canadian gynaecologist, Dr Jen Gunter wrote at the time it was first published,

…the article contributes nothing to the medical literature and Fertility Sterility should be ashamed they accepted it for publication.”

The investigators tried to defend the study when it was first published, citing possible links between perceived attractiveness, high oestrogen levels, and/or genetic links with severe endometriosis, but hormonal and genetic tests were not included in the study, so this line of inquiry seems incomplete at best.

That the study was done and published certainly raises some questions about the way women are viewed and treated when seeking health care, writes senior public health registrar Dr Lea Merone, below.

And now that it has resurfaced with a renewed round of outrage, writes Merone, it also poses risks to women’s therapeutic relationships with their health care providers.

From a recent study that compared the success of endotracheal intubation for male and female physicians (there was no difference, but where is the evidence that male-delivered intubation is the gold standard by which we measure women?), to the controversy over endometriosis research that involved rating women’s attractiveness, sexism is at times observed to permeate the narrative in modern medicine.

The paper Attractiveness of women with rectovaginal endometriosis: a case control study was published in the specialist medical journal Fertility and Sterility relatively recently – in 2012 – and one wonders how in modern times, a study professing to link physical attractiveness to a debilitating gynaecological disease not only gained ethical approval, but was also quietly published.

As outrage spreads through social media and a potential for mistrust between women and the medical profession develops, it seems timely to discuss this problematic study, and call for the journal to consider retraction or modification of a paper that, at best, does nothing to further women’s health and wellbeing, and at worst, could cause significant harm.

The ugly side of attractiveness

The pervasiveness of sexism within societal beauty standards is well-known, and it is also well known that these standards are largely socially constructed. Naomi Wolf’s influential book, The beauty myth, how images of beauty are used against women highlights the problems of society’s preoccupation with unattainable beauty standards, stating beauty is utilised as a “political weapon” against women’s advancement and as a backlash against feminist movements.

This “beauty myth” tells us the embodiment of beauty is imperative for women, but not for men, and enforces false beliefs of the intertwinement of beauty and reproduction. However, societal perceptions of beauty have changed notably throughout the recent decades with no corresponding evolutionary or genetic change, from the lean women of the 1920’s, the voluptuous trends of the 1940’s and the emaciated look that pervaded the 1970’s-1990’s.

Additionally, there are considerable cultural differences in the perception of beauty, further casting doubt on evolutionary theories of reproduction.  As Naomi Wolf wrote,

There is no legitimate biological justification for the beauty myth”

The emphasis on beauty, according to Wolf, is about power and male institutions. The ageing woman is perceived to lack beauty, because with age comes increased knowledge and power. Fear of ageing creates generational divide.

A woman’s identity is entrenched in her physical attractiveness; this ensures that she remains vulnerable to external approval and validation and that failure to achieve these gold-standards of beauty impacts self-esteem and subsequent success.

Indeed, a global survey from the cosmetic company, Dove (2016) found, concerningly, that female body confidence was a critical issue, often leading women to avoiding socialising and eating when feeling negative about their body image.

Misogyny in medicine and medical research

If beauty ideals are central to the oppression of women, studies such as Attractiveness of women with rectovaginal endometriosis: a case control study, could serve to reinforce false beliefs and hostility towards females.

Arguably, this study by Vercellini and colleagues perpetuates the beauty myth, degrading female patients to nothing more than a subjective assessment of their attractiveness under the pretence of patient care and research.

When sexism pervades professional medical spheres, we are confronted by significant concern for the care for half of our patients; women. Studies have demonstrated that owing to gender biases, the pain of female patients is often taken less-seriously than that of males; with women on average waiting significantly longer for diagnosis and pain relief.

Vercellini et al suggest that the severity of endometriosis is associated with physicians’ subjective assessment of patients’ attractiveness, but to what aim? To aid physicians in diagnosis?

Encouraging physicians to evaluate and assess a woman’s illness based upon subjective assessment of her physical attractiveness leads us into dangerous territory; in a society that places undue emphasis on this beauty myth, are we now to prioritise diagnostic care on the basis of perceived attractiveness?

This research in no way contributes to, or changes, current clinical practice; there is no objective way to truly measure beauty, and indeed, beauty is in the eye of the beholder. Consequentially, suggesting that endometriosis is linked to attractiveness is moot and based upon the researchers’ own expectations of patient aesthetic.

This leads us to question if the research team have a fixation on female beauty, having previously published a narrative review in another specialist medical journal, entitled, “You are so beautiful, behind women’s attractiveness towards the biology of reproduction”. This article also posits a link between “attractiveness” and gynaecological disorders.

Arguably, it is not the role of the doctor to notice or comment on the sexual attractiveness of the patient. Doctors are trusted by the public and guided by a set of ethical standards laid out in the Hippocratic Oath, under which the boundary of sexual relations with patients is absolute.

Use of a Likert-scale measurement of sexual attractiveness of patients (as was done in the endometriosis study) resoundingly over-steps this mark, objectifying vulnerable women – who were not told the true nature and hypothesis of the study – and sexualising those under the care of the researching and clinical teams. There is a clear line between noting phenotypic risk factors for disease, such as obesity, and ranking attractiveness on a 5-point scale!

This research, although published in 2012, has finally reached the popular media and the wider public. This may throw the reputation of the medical profession into question; if our vulnerable patients cannot approach us for care without judgement, the foundations for effective clinical care are lost.

On those grounds, consideration should be given to the continued availability of this paper. It is scientifically questionable, given that the beauty standards were based upon the subjective opinion of just four clinicians, and it has the potential to damage doctor-patient relationships.

Even if further research established a way of validly assessing attractiveness, all patients with concerning symptoms should be assessed in the same way, according to the ethical principle of justice, or fairness. All this research achieves is further objectification of women in a world where many are working hard against this rhetoric. 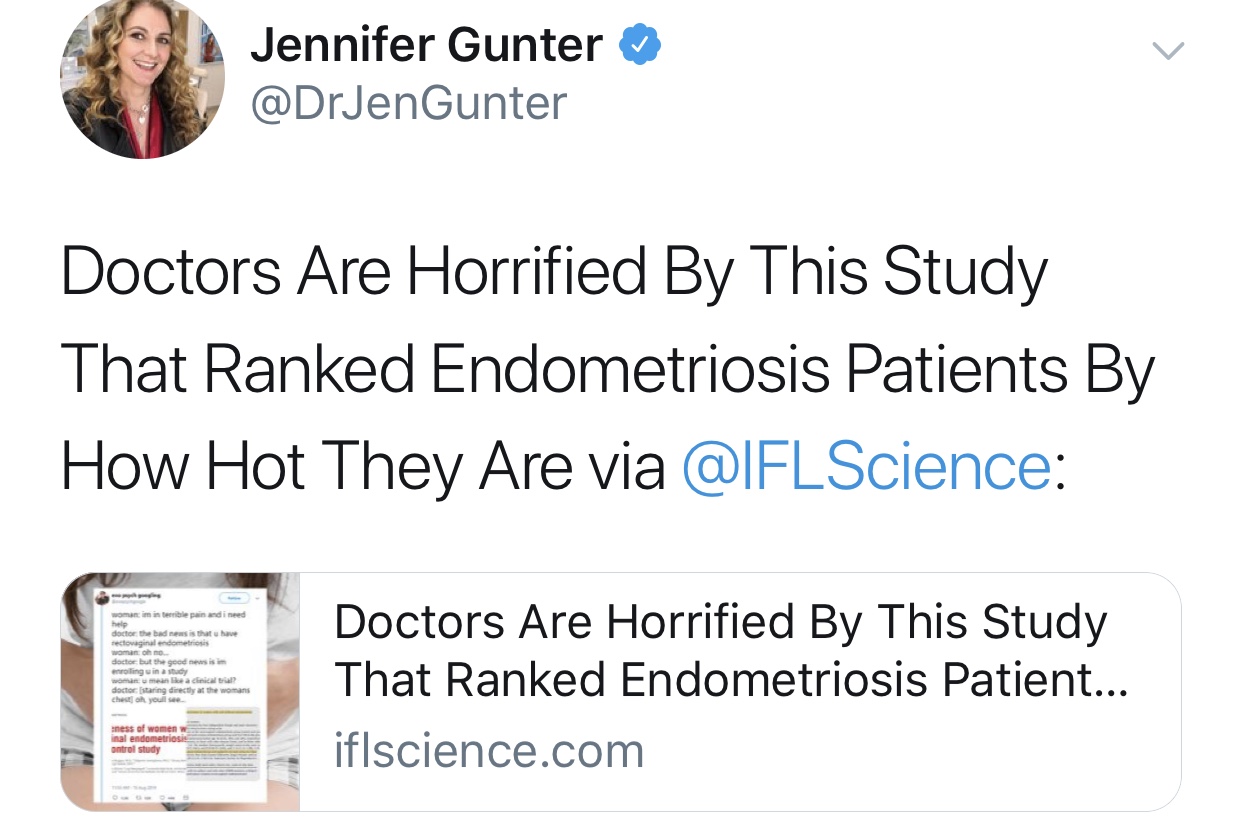 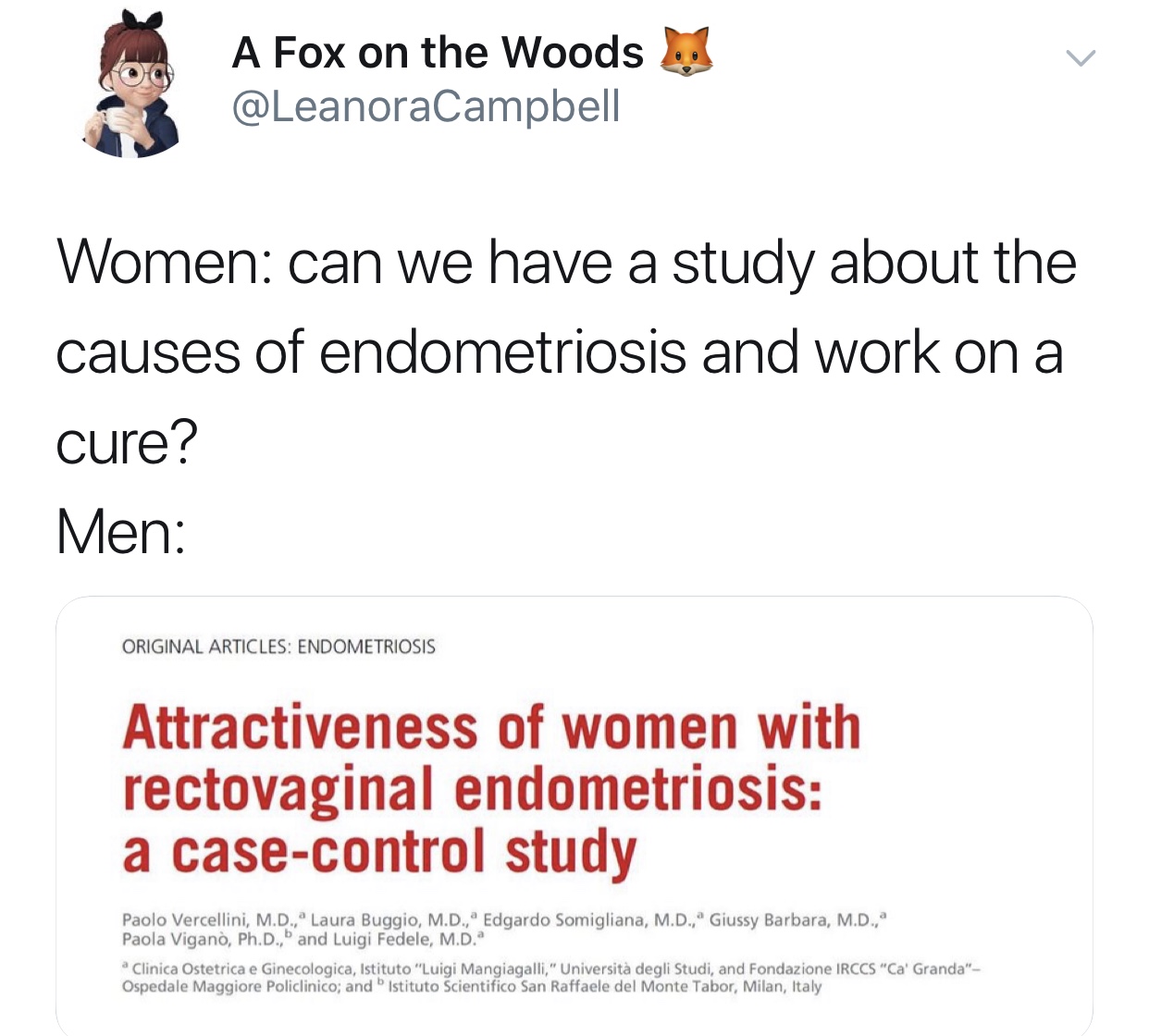 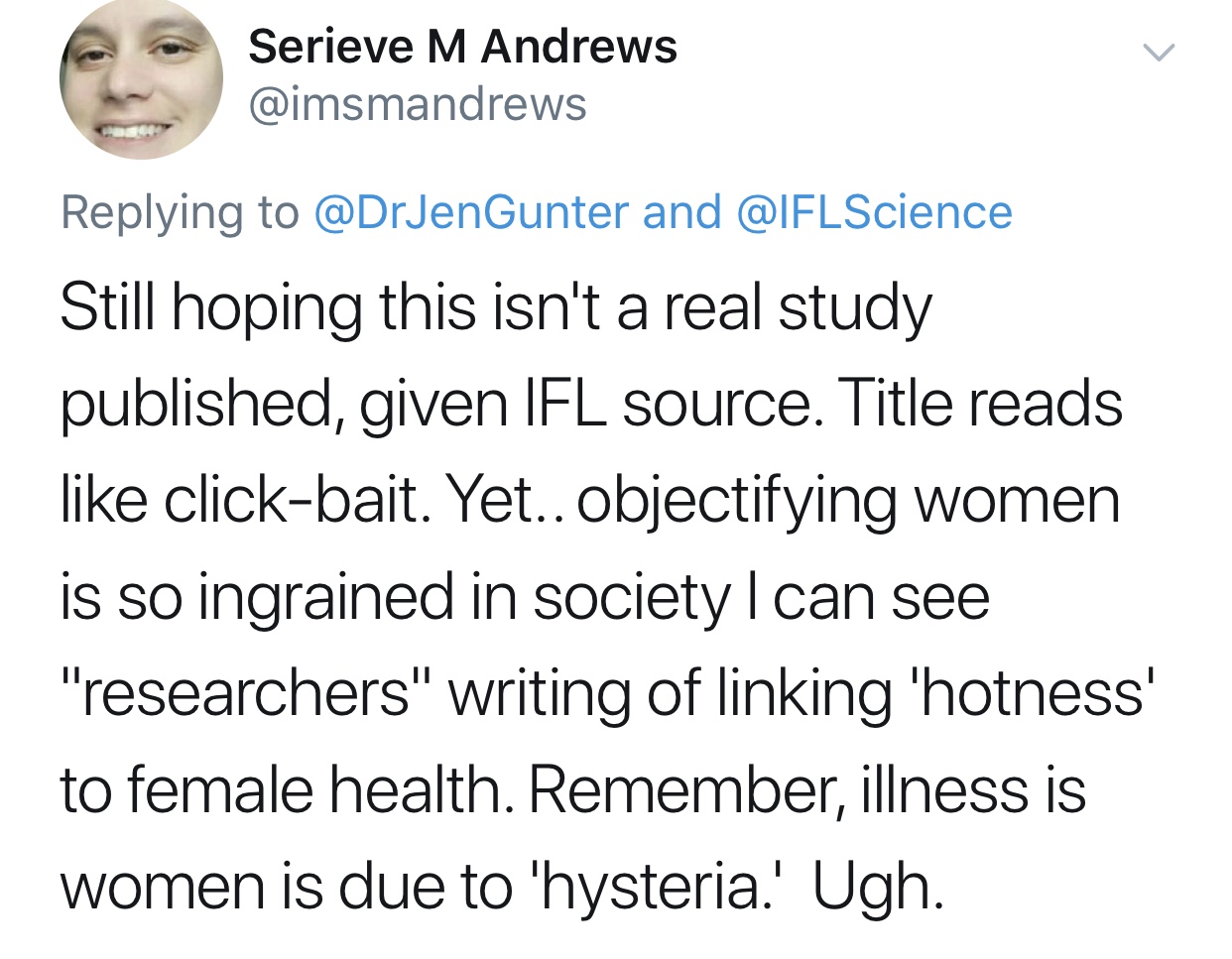 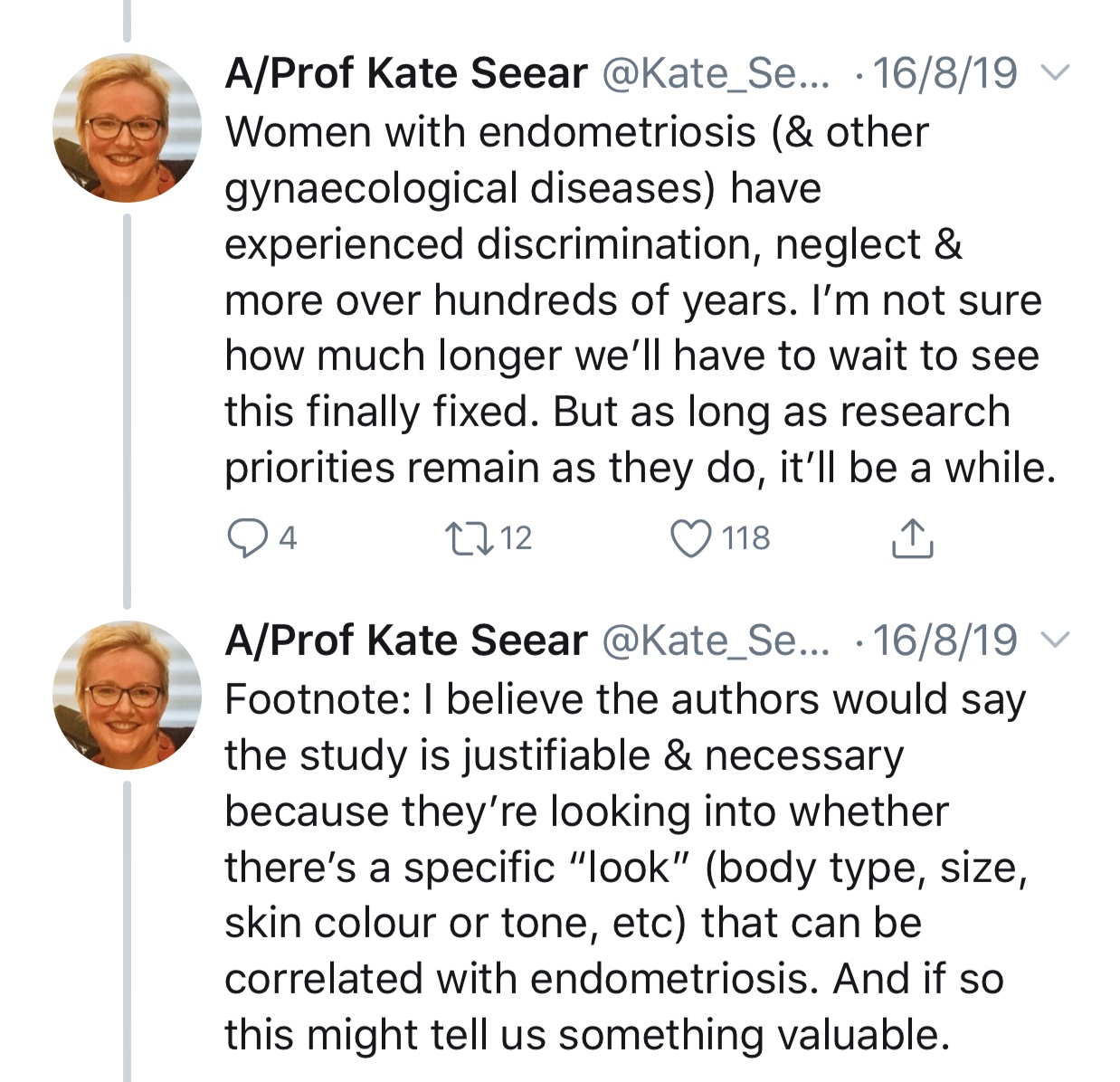 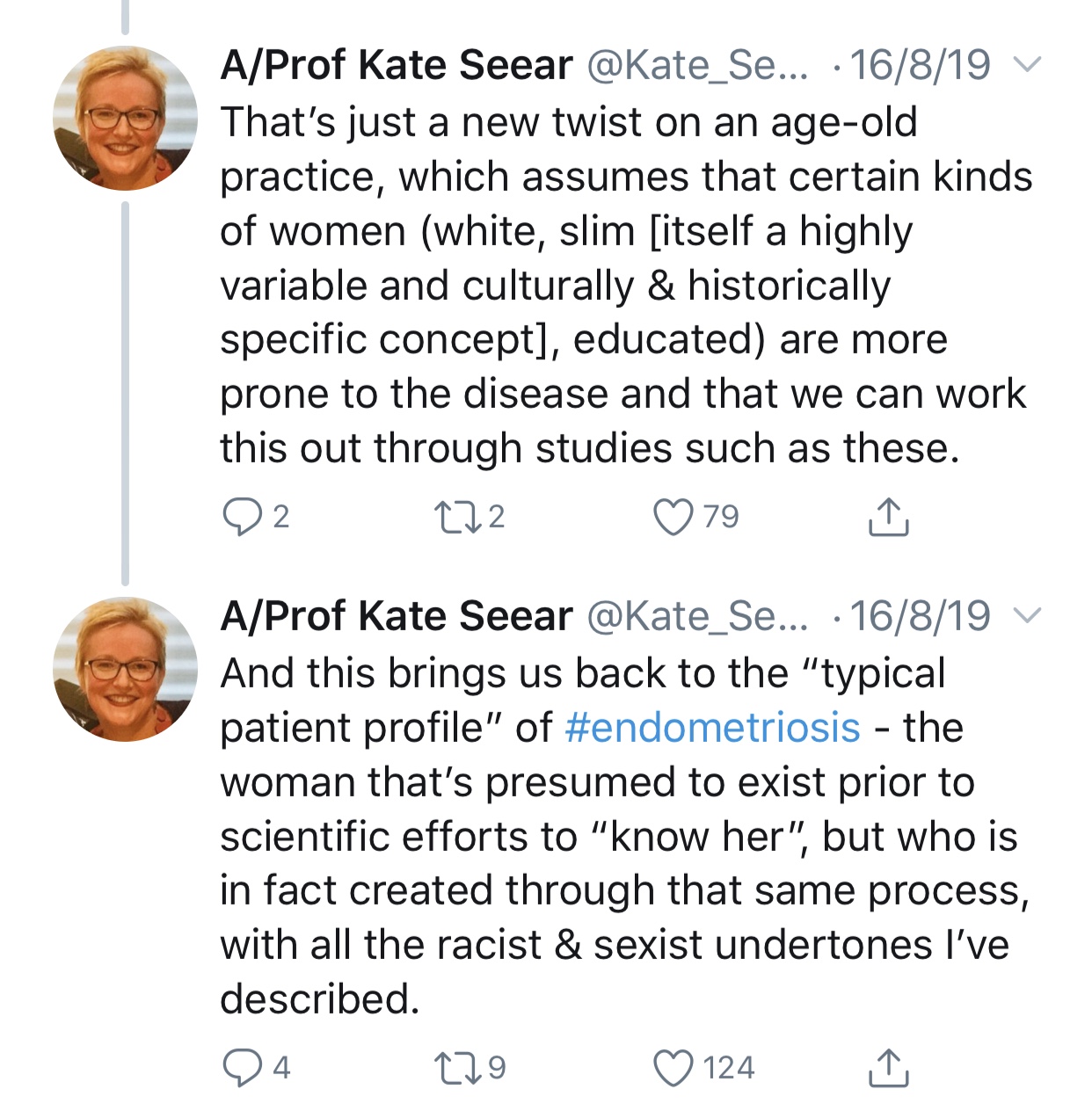