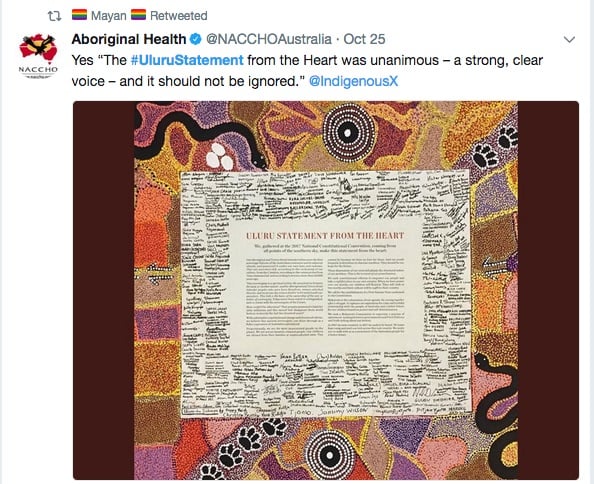 The Voice proposal: an important mechanism for improving policy and Indigenous health

The proposal for a constitutionally recognised body to give First Nations people a voice to Parliament would have both symbolic and substantive impact, according to senior Indigenous health advocate Pat Anderson AO.

Delivering the 2017 Dr Charles Perkins AO Memorial Oration at the University of Sydney this week, Anderson said the Voice mechanism would formally acknowledge the place of Aboriginal and Torres Strait Islander people in this country.

Among more substantive benefits, she said a Voice could “address Australia’s appalling history of supposed consultation with our peoples… all too often we have been excluded from the key decisions that are made about our lives.”

The Turnbull Government’s subsequent rejection of this proposal – as neither “desirable or capable of winning acceptance in a referendum” – has caused widespread anger and distress.

The Voice proposal was a key element of the Uluru Statement from the Heart, which also called for a process of treaty making, and a process of truth telling (according to some media reports, the Government has not rejected these other options).

Sean Gordon, chief executive of the Darkinjung Aboriginal Land Council, said the Government’s announcement was an “act of political bastardry” that was causing shock and heartbreak across Australia.

“Let us be very clear about this,” he wrote for ABC News. “What Malcolm Turnbull has rejected is the expressed wishes of the Indigenous people.”

Meanwhile, a leading Indigenous health advocate, Richard Weston, offers some personal reflections below on the hurtful implications of the Government’s decision.

He describes it as a missed opportunity for implementing a strategic approach that would have helped to improve government policy to tackle pressing concerns, including over-incarceration and over-representation in the child protection system.

“We don’t have enough say about our lives in our own land,” he says.

It was with a measure of sadness and disappointment that I received the news that the Turnbull Government had knocked down the Referendum Committee’s recommendation to establish a mechanism to advise the Australian Parliament on Indigenous policy matters, the so called ‘Voice’. 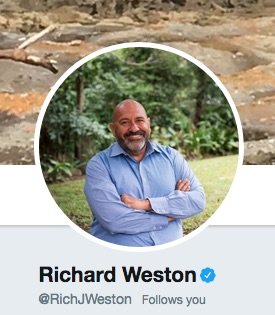 I supported the concept of the ‘Voice’ for a number of reasons.

Firstly, it wasn’t that controversial. I was at the Native Title Conference in Townsville earlier this year and watched a presentation by Bryan Keon-Cohen, who was a lawyer for the Mabo family in the famous case that rid this nation of the legal fiction Terra Nullius.

I had a quick yarn with Mr Keon-Cohen after his presentation and asked him what he thought about the Uluru Statement. He responded that it was a modest proposal. The Australian Parliament receives advice from a number of external bodies that provide advice, recommendations or reports on a range of issues eg Productivity Commission, Australian Law Reform Commission. The Uluru Statement was not radical.

I was interested in supporting a proposal that could succeed and would potentially deliver practical policy advice that might improve some of the wicked problems we face in our communities.

I attended one of the initial leadership gatherings chaired by Pat Anderson and Mick Gooda (I went to the one in Melbourne), which was attended by 80 Aboriginal and Torres Strait Islander people. Noel Pearson outlined a roadmap towards a treaty. The first step was ConRec, and ultimately that proposal, as agreed at Uluru, was for the ‘Voice’.

But there were other steps such as a truth telling process leading in to Treaty – what an opportunity for healing and reconciliation for our nation. In our work at The Healing Foundation, we know how fundamentally important healing our spirits is to our overall inner wellbeing.

This approach resonated with me because I’ve worked in Aboriginal health in Far West NSW (Maari Ma) and now at The National Healing Foundation based in Canberra.

I know the hard slog involved in achieving positive change in systems that do not prioritise issues the same way we do, and that do little to honour our knowledge, history and culture.

Although some things have improved, we are in many ways still marginalised in society and in human services systems – and all this within our own country. We don’t have enough say about our lives in our own land.

To achieve change within a resistant western system that is almost diametrically opposed philosophically to our ways requires clever strategy. It requires a mindset that understands the conservative nature of Australia when it comes to change.

You have to work with that, understand it and strategise accordingly.

In many ways you have to ‘suck-it-up’ and endure the daily slights you get as you try to work constructively – not necessarily aimed directly at you, but indirectly through the media, overheard comments in shops and so on – death by a thousand cuts.

It is a strategic approach that would enable us to move closer to achieving a final settlement of matters, whilst concurrently improving government policy to tackle issues like overincarceration and overrepresentation in the child protection system, amongst others that need addressing now.

The ‘Voice’ was agreed at the gathering at Uluru by 300 of our mob and informed by the 18 or so workshops leading up to it.

It’s a shame that our political leaders couldn’t have put some energy into supporting the Uluru Statement.

They could have tried to make the argument and persuade the Australian people, much the way Keating did when he implemented Native Title or John Howard did when he brought in tougher gun laws.

As we reflect on the Government’s decision, spare a thought for Pat Anderson, Megan Davis and Noel Pearson and the rest of our mob who may be feeling the Déjà vu of yet another crushing disappointment delivered by our political leadership.

It’s not the first time we’ve been disappointed by government, in fact many of us may have expected it. It’s also not likely to be the last time either.

And whilst we are used to the experience, it doesn’t get any easier – it hurts.

• Richard Weston is a descendant of the Meriam people of the Torres Strait. He has worked in Aboriginal and Torres Strait Islander affairs for more than 20 years, 14 of these in Indigenous controlled health services in Far West New South Wales and Queensland. He has been CEO of the Healing Foundation since September 2010; however, this article expresses his personal views. Follow on Twitter: @RichJWeston 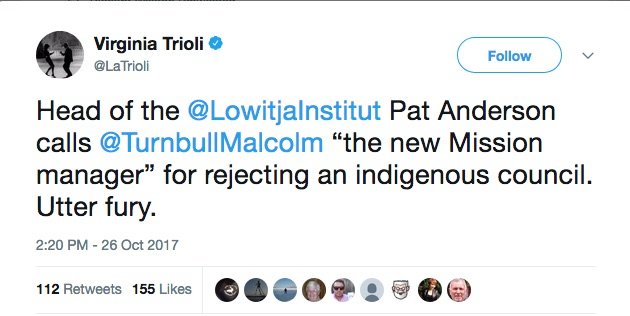 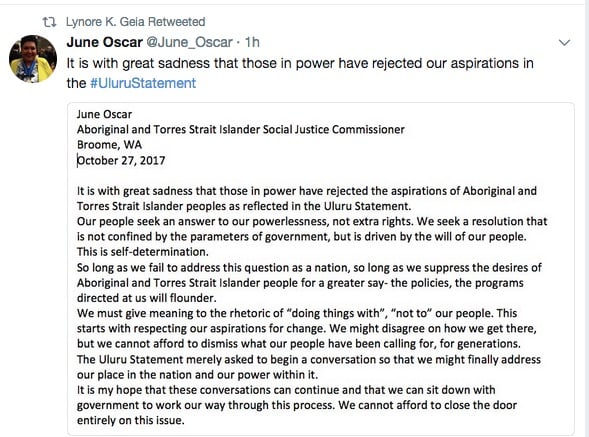