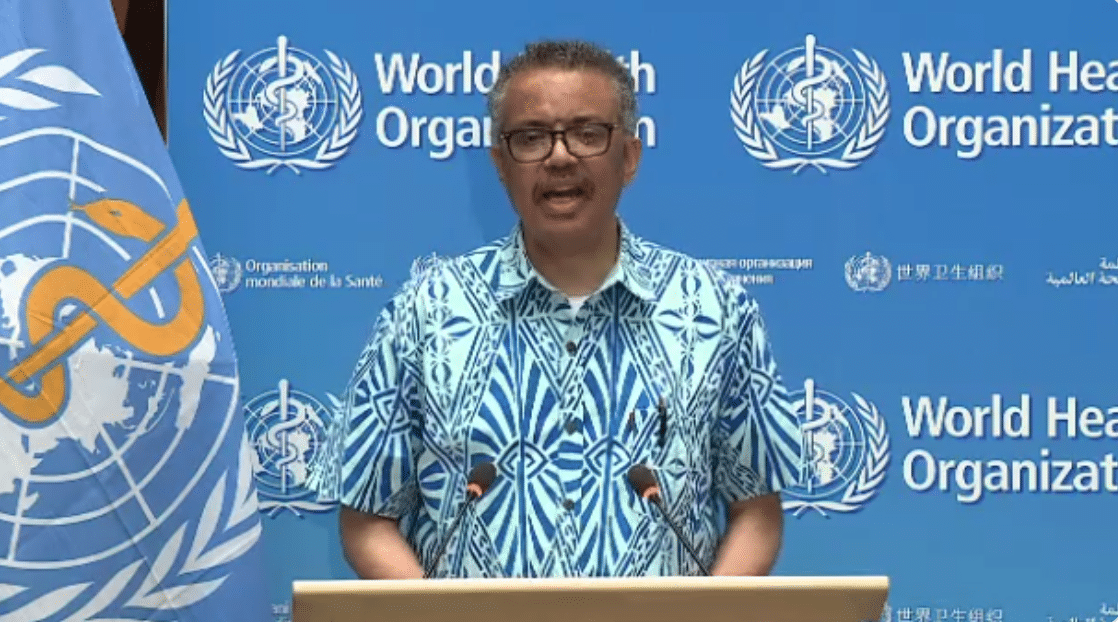 For the first time ever, the WHA was held virtually, and comprised two days of speeches, negotiations, meetings and the passing of resolutions focussed on the global response to the COVID-19 pandemic.

Overall WHA73 was seen as strongly supportive of the WHO and its response to COVID-19. The COVID-19 resolution was passed unanimously and focussed on key aspects of the pandemic, including the disproportionate impact it is having on poor and vulnerable communities and the importance of ensuring global access to any future vaccine. The resolution also committed the WHO to an independent evaluation of its pandemic response.

International commentary on WHA73 made clear that the US has emerged more isolated from the international community on COVID-19 and other global health issues, due largely to criticism from US President Donald Trump of the WHO and his threats to withdraw its funding.

Below, Croakey editor Jennifer Doggett summarises the main outcomes of WHA73, including details of the COVID-19 resolution and the geopolitical context influencing the outcomes of this important international agreement.

The People’s Health Movement will hold a webinar “The COVID19 WHA: A People’s Assessment” on 21 May. Read their report about the “mixed outcomes” of the WHA.

The resolution (latest available version) was passed unanimously by the 194 WHO Member States and commits to an impartial, independent and comprehensive evaluation of the WHO-coordinated international health response to COVID-19.

The resolution states that the review will focus on identifying the origins of COVID-19 and its routes of transmission to humans. It will also make recommendations to improve global pandemic prevention, preparedness, and response capacity.

The resolution also focusses on mobilising resources for the development, manufacture and distribution of COVID-19 diagnostics, therapeutics, medicines and vaccines.

It makes a strong statement of equity, recognising the disproportionate impact of COVID-19 across communities and countries and the compounding impact of the pandemic on other health inequities. 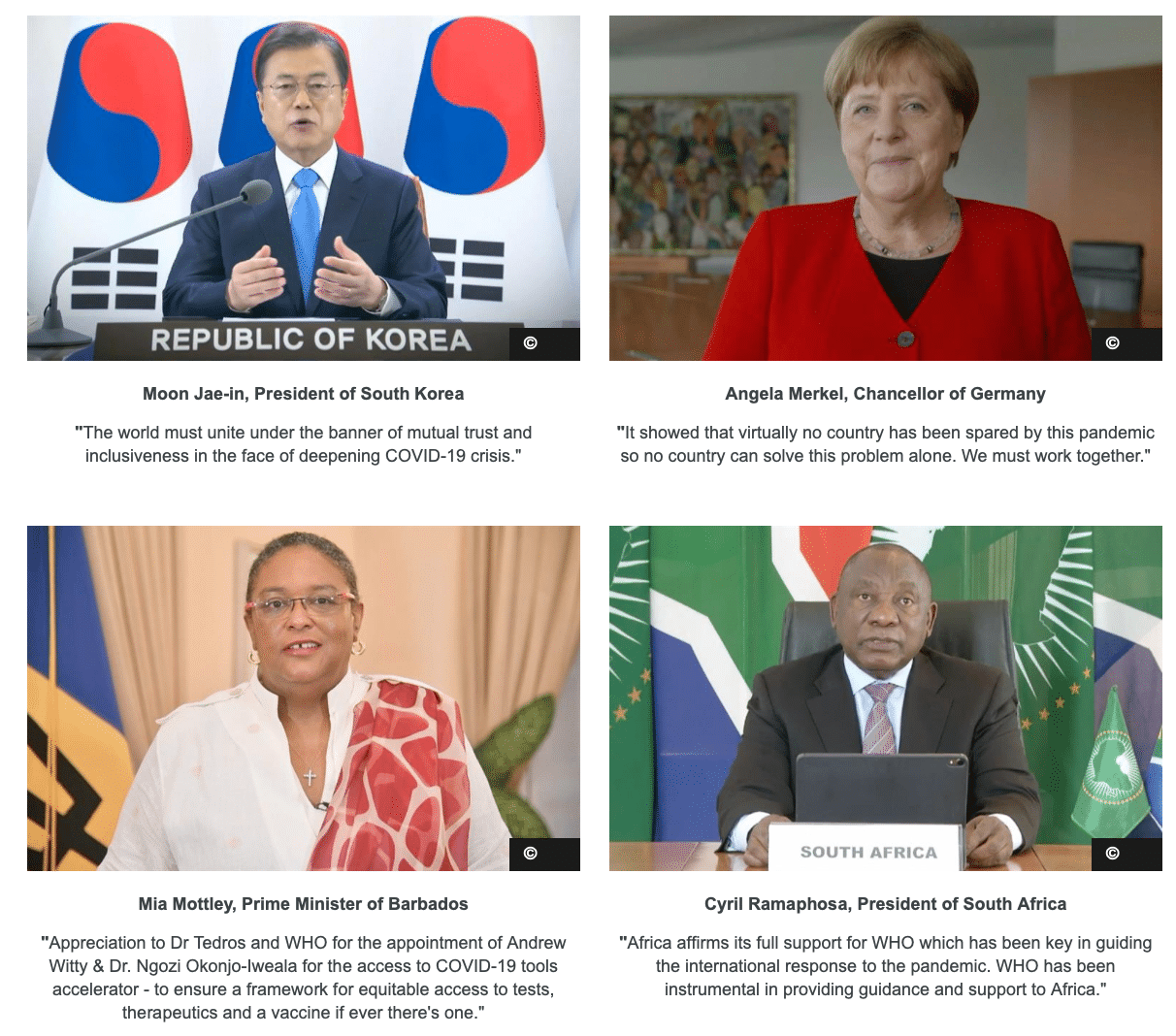 Key relevant extracts from the resolution include:

Dr Alexandra Phelan, Assistant Professor at Georgetown University, Washington DC, highlighted on Twitter some of the key features of this resolution:

The Resolution reaffirms the importance of global solidarity and the WHO’s role as a leader and coordinator in the #Covid19 response, pushing back on critiques of the organization and retreat into nationalized or isolationist approaches.

[It] affirms ensuring global equitable access to vaccines and equipment, including reiterating TRIPS flexibilities for public health and the importance of urgently assisting developing countries in #covid19 response.

The Resolution provides a series of specific and detailed calls to Member States in how to respond to #Covid19, including grounding their responses in human rights.”

A key issue discussed at WHA73 was the development of a vaccine for COVID-19.

Prior to the assembly, a number of nations and health organisations had called for any successful vaccine to be declared a ‘public good’

The European Union also stressed the importance of ensuring equitable access to the vaccine:

The role of equitable access to a vaccine in bringing the pandemic to an end is crucial.

As a global, public health good it has to be affordable and accessible to everyone. Also, access to affordable equipment, medicines and treatments is vital.”

Declaring something a ‘public good’ does not have an exact meaning but is generally understood to imply that there cannot be patent or cost barriers preventing access to the vaccine.

At WHA73 a number of leaders supported this call and committed their countries to making any vaccine they developed available worldwide.

COVID-19 vaccine development and deployment in China, when available, will be made a global public good.

This will be China’s contribution to ensuring vaccine accessibility and affordability in developing countries.” 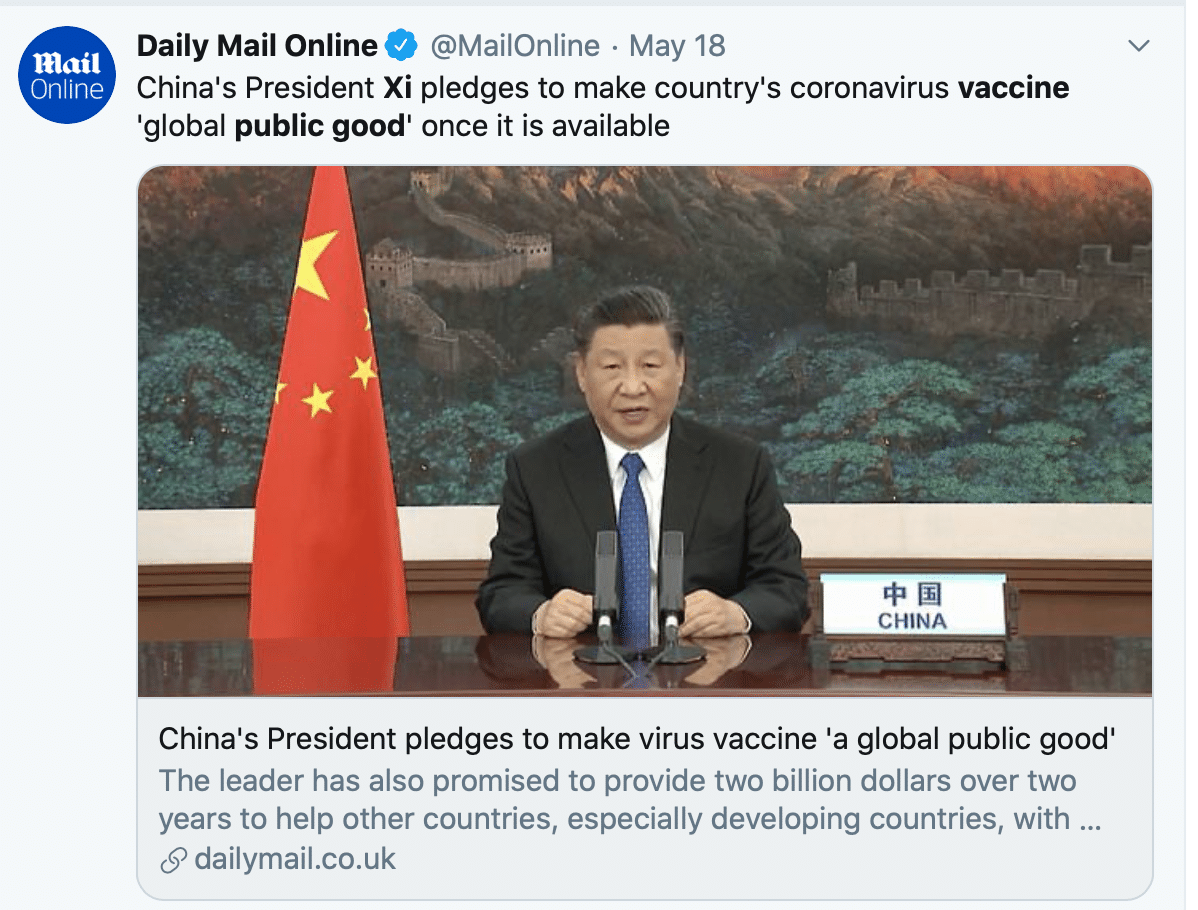 President Macron of France said that the purpose of increased French support to the WHO and its Access to COVID-19 Tools (ACT)-Accelerator is to have “massive support to research to speed up the results of medical research and to ensure we can guarantee universal access”. 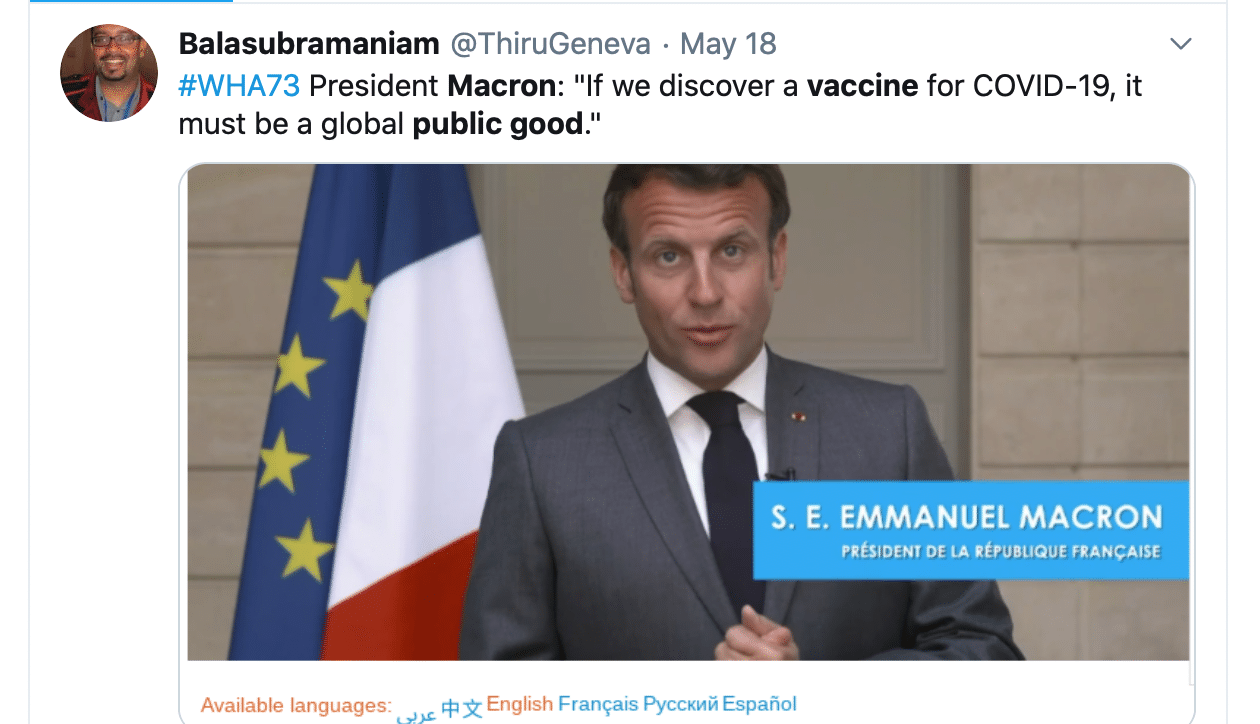 He further said that “if we discover a vaccine against COVID-19, it would be a global public good and everyone should have access to it.”

However, there is some debate about whether the final resolution commits to treating future COVID-19 vaccines as a global public good.

The resolution states that it:

Recognizes the role of extensive immunization against COVID-19 as a global public good for health in preventing, containing and stopping transmission to bring the pandemic to an end, once safe, quality, efficacious, effective, accessible and affordable vaccines are available.”

This was welcomed by the EU and others as meaning that a future vaccine would be given ‘global public good’ status. 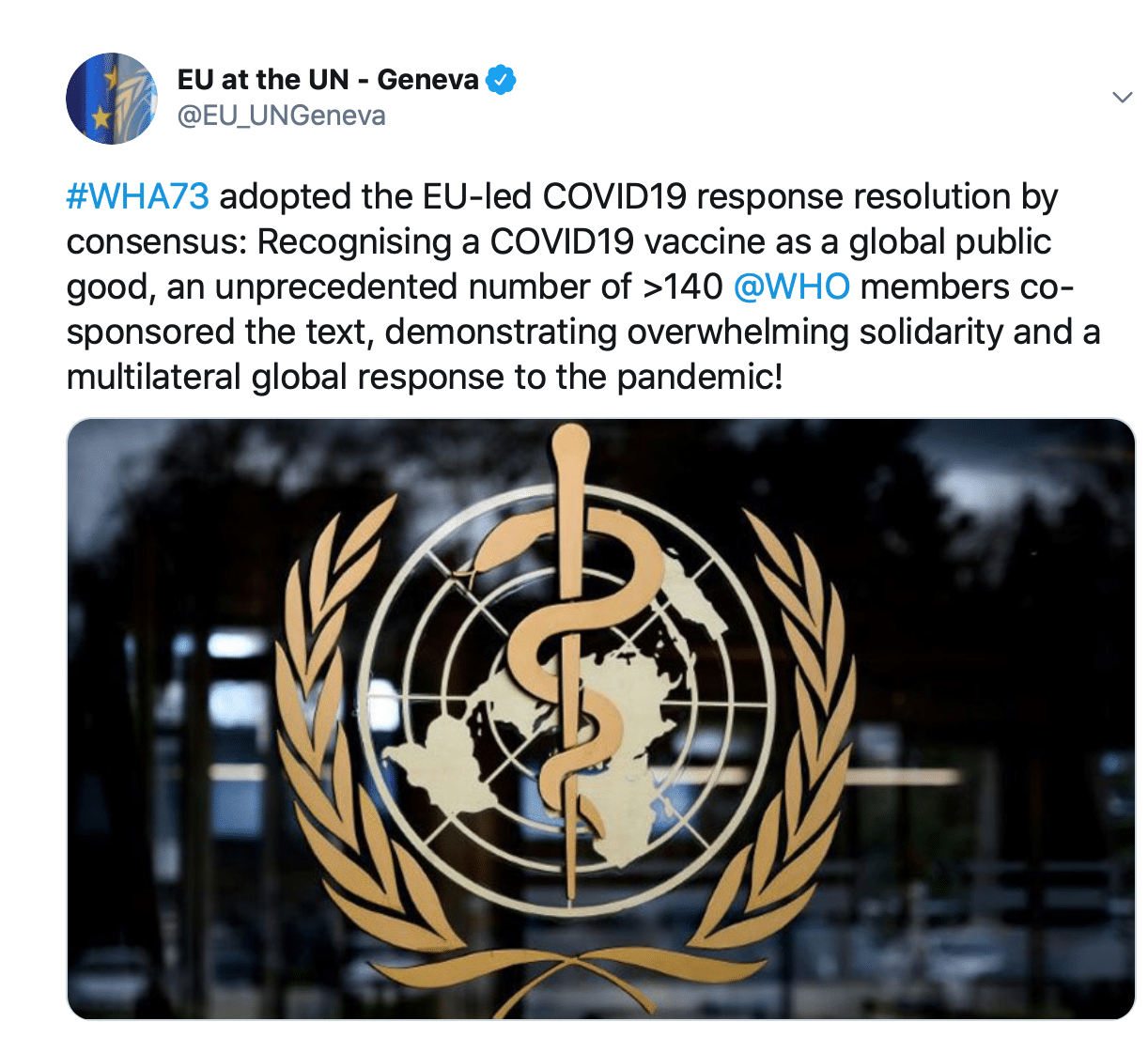 But other reports questioned this interpretation and pointed out that this could be interpreted as treating immunisation services as a global public good but not the vaccines themselves.

WHA73 occurred in a tense geopolitical context, fuelled partly by antagonism from the US towards the WHO.

This included US President Donald Trump’s criticism of WHO, including a letter he sent just before WHA73 to Dr Tedros, claiming that the WHO did not act quickly enough to respond to the threat of COVID-19 and threatening to withdraw US funding if the WHO did not make major changes to its organisation and operations.

The Lancet swiftly denied some claims in the letter, and issued a statement correcting errors made by Trump and expressing support for the WHO.

Trump’s actions were also widely criticised by international media and commentators and seen as an attempt to deflect the focus on the poor domestic response to the virus within the US.

We needed the World Health Assembly to unite behind a People’s Vaccine, not a Trump Administration seeking scapegoats for a pandemic it has mis-handled from the start.”

Adding to the US isolation from the international community on COVID-19 was a statement put out by the US embassy in Geneva commenting negatively on some aspects of the agreement, including the right of poor countries to waive patents for medicines in a health emergency, and the language used to describe reproductive healthcare, which it said could be interpreted as permitting abortions.

Australia has been caught up in these tensions due to our diplomatic ties to the USA and economic dependence on China.

Australian reporting on this issue has presented the WHA73 resolution as supportive of Australia’s role.

However, international reports interpreted the outcome of WHA73 very differently.

The Chinese national daily the Global Times reported that it was a ‘slap in the face’ to Australia’s Washington-backed attempt to push for an inquiry focussed on China’s repose to the virus:

This is a slap to the face to countries like Australia – the most active player in pushing forward a so-called independent probe into China over the coronavirus outbreak, which was then rejected by the international community.”

The UK-based Guardian newspaper also reported that Australia’s initial proposal was perceived as being politically motivated and that the European Union was largely responsible for the final resolution.

The resolution, supported by China’s president, Xi Jinping, on Monday and largely drafted by the European Union, stops short of the kind of international inquiry focused on China’s conduct that was first canvassed by Australia and the US.

The Chinese foreign ministry claimed the resolution was completely different from the politically motivated inquiry sought by Australia.”

Save the Children stressed the importance of universal health coverage in responding to global health threats:

The current pandemic has revealed cracks and weaknesses in public health systems around the world.

It is a wakeup call for needed investment to build strong and resilient health systems that deliver Universal Health Coverage for all and can respond to disease outbreaks while maintaining critical routine services, with needed protections for the most vulnerable in society.”

Cochrane welcomed the resolution and stressed the importance of following the WHO’s guidance on public disclosure of results from clinical trials in researching vaccines and treatments for COVID-19.

We call on WHO member states to support evidence-informed decision making by taking action to safeguard trial transparency; and to provide adequate funding for evidence synthesis given the challenges ahead.”

The Non-communicable Diseases Alliance highlighted the common factors necessary for the prevention and management of both infectious and non-communicable diseases (NCDs) and called for a focus on NCDs the continued delivery of routine health care as part of countries COVID-19 responses.

Closing comments from Dr Tedros aptly summed up the overall tone of solidarity and support for a global health response at WHA73:

For everything COVID-19 has taken from us, it has also given us something:

A reminder of what really matters;

And the opportunity to forge a common future.

Dark and difficult days may lie ahead, but guided by science, together we will overcome.

Let hope be the antidote to fear.

Let solidarity be the antidote to division.

Now, more than ever. 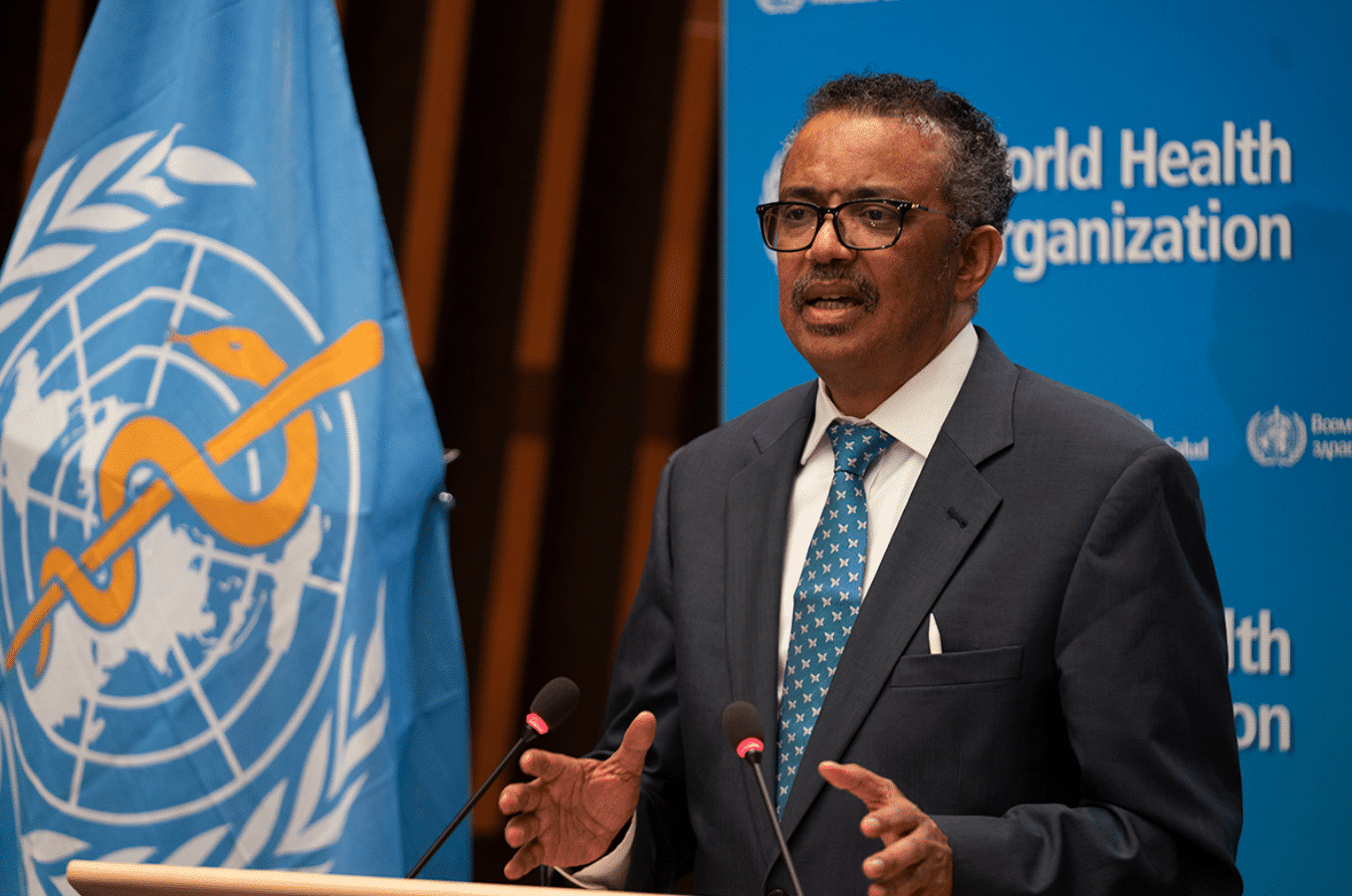