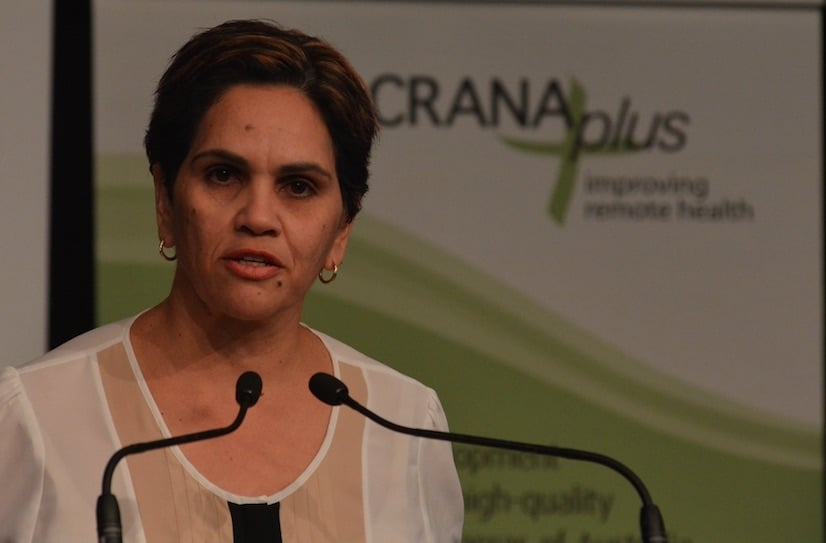 “The power of the narrative” is the theme of the CRANAplus conference now underway in Alice Springs, and participants have heard stories about the power of writing for wellbeing, the need to address racism and poverty, and of the resilience of Aboriginal and Torres Strait people.

Thanks to journalist Rosemary Cadden for the reports below (and also to those who have been sharing the #CRANAplus15 discussions via Twitter.)

The Write Road to recovery

We can lose everything – every single thing we own, our homes, our relationships, our expressions – but we cannot lose our story. 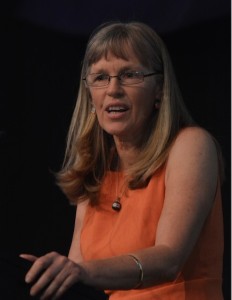 Stephanie Dale, guest speaker and an award-winning author and journalist, is undertaking The Write Road, a creative mental health initiative that was launched when she hit the road in May last year.

So far, Dale has travelled 40,000 kilometres to 36 towns, delivering 137 workshops in community halls, woodshed and beside waterholes to 557 people.

At the conference, Dale told the story of a young Indigenous woman at one of her workshops who shared her journey and later said: “I have never felt as calm as I have since that workshop.

Dale also spoke of an elderly woman in a small New England village who wanted to right a family wrong so she might free future generations from the legacy of a terrible burden she had carried for nearly 100 years.

Then there was the woman in the Tablelands town who longed only to write a letter of hope to her husband and sons as the family was experiencing a drought that was destabilising their family relationships.

“I have amassed a vast collection of ‘doubts and fears’ – specifically those which stand between human beings and their greatest longing,” Dale said.

“Why do we deny ourselves that which we truly long for more than anything else in the entire world?”

Far from wasting time, being slothful or idle, the expression of creativity in any form is as vital to our wellbeing as food air and water, she said.

“To be well, we must create – to be strong; we must know our own story.”

The cornerstone of every story is the word ‘because’, she said.

“It’s in your interests to pay attention to ‘because’ – because your life – and your story – depends on it.

Writing – the act of releasing inner narratives from our heart, mind and body – can lead us to knowing our Self.

And when we are true we are strong.”

The point of The Write Road is not to unearth talent – although Dale says there are some people in the heart of our remote red continent with memoirs, science fiction trilogies and short story collections whose names you will hear in the future.

She said: “The purpose of The Write Road is recovery – recovering human voices that have fallen silent, recovering spirits that are suffering for lack of hope, recovering the will to claim what is rightfully ours.” 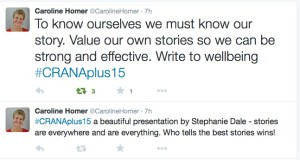 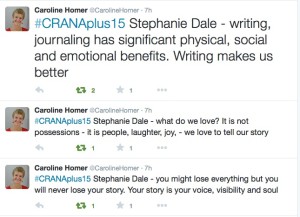 Calling for action against racism

In his opening address to the conference, CRANAplus CEO Chris Cliffe said it was a tragedy that racism still exists in Australia, and described its insidious, eroding impact.

“The evidence is clear: racism has a direct and profound impact on not only the emotional, but also the physical health of victims.

Regardless of where racism lurks, we must be brave enough to not let those nasty comments slide or laugh uncomfortably at that slightly racist joke.

Racism lurks in organisations, services, communities and individuals, and until we provide leadership and ‘call out’ racism, no matter where we see it, how can we expect Aboriginal and Torres Strait Islanders to feel safe and respected whilst in our care.”

Cliffe also pointed to the inequity of services in remote areas compared to the cities.

“Our nation is a wealthy, well-connected, peaceful, developed country,” he said. “But still, the further away people live from a capital city, the worse their health becomes.”

Cliffe called on delegates to be part of a strong voice to argue against powerful groups that push “metro-centric health agendas”, and to remind decision-makers of the reality of life in remote Australia, the people who live there and the health workforce that serves them.” 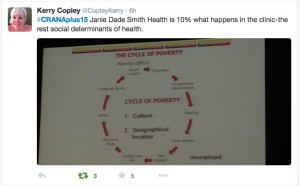 Visions from the past and for the future 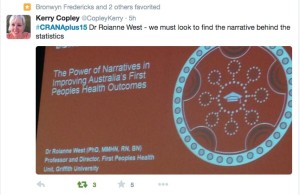 Indigenous Australians have the worst health in the developed world, Professor Roianne West told the conference.

This seems to be the start of a rather bleak story, said West, who is a member of the Kalkadoon desert people from Far North West Queensland.

“But there is enormous hope,” she said.

“Your profession is, and has been, at the forefront of health advancement here in Australia and around the world, “ she told the delegates.

West, with more than 20 years’ experience in Indigenous health, comes from a long line of healers. She sees enormous potential in the role of Indigenous knowledge and the unexplored potential that exists for two-way learning.

“Our peoples have maintained a continuous connection to each other, culture and country, longer than any other human group on the planet.

In the process we have acquired deep knowledge, understanding and experience that can only come from such a sustained relationship.

It is right here in Australia that our ancestors forged their resilience and handed to us the legacy of our ancestral beings and our responsibility for the future of our people.

Through massive change in landscape and human development over more than sixty thousand years our people have continued.

This achievement is worthy of acknowledgement.”

West’s mother has been a health worker for nearly 50 years. “She has been having similar conversations almost daily with her non-Indigenous colleagues,” West said.

“I have been working in Indigenous health for 20 years and have similar conversations almost daily.

“My hope is that my daughters are not having this conversation when they become leaders in Indigenous health in the very near future.”

To use Indigenous knowledge, we need to build a recognisable Indigenous health workforce, but growing and nurturing this workforce continues to be a challenge, West said.

“Unfortunately, based on 2013 workforce data, we have 186 Indigenous midwives nationally. We know this is grossly inadequate given the need.”

The number to reach parity with the population of Aboriginal and Torres Strait Islander Australians is 608, but taking into account the higher number of births for non-Indigenous women, that number rises to 852. This is 4.6 times the current number.

But to illustrate just how much hope there is, West showed a DVD to the conference of Indigenous students in the School of Nursing and Midwifery at Griffiths University, called First Peoples Aspirations and Pathways to Health Program.

As one student Moa Newman from Bamaga said: “I’m the eldest of eight siblings and I just wanna show them that uni is just another stepping stone and to go to that pathway.”

West concluded her presentation by saying:

“My vision is that I want to see my people socially and economically included in the nation.

I want to see our kids educated, healthy and with the opportunity to grow up and get to jobs and to be engaged in meaningful activity.

I want to see our people living in good housing. I want our children to have good food to eat, fresh air to breathe and clean water to drink.

Not too much to ask!” 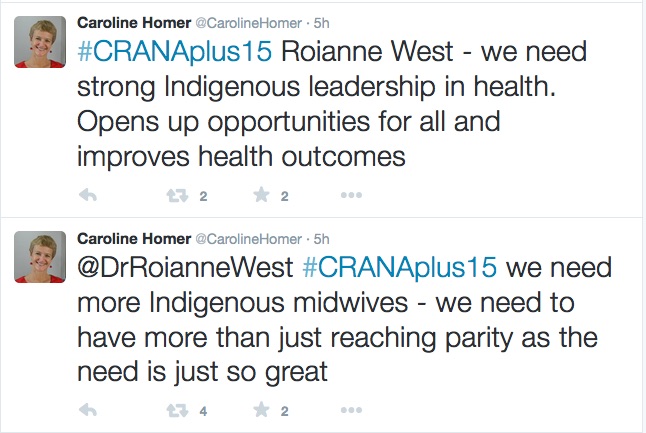 Finding ways in Pitjantjatjara and Ngaanyatjarra as well as in English to talk about mental health is the focus for the Uti Kulintjaku team in Central Australia, a band of Ngangkari, senior Anangu, interpreters and mental health professionals.

The group is about bringing things out in the open – talking about mental health and trauma – to help families and communities see and understand what’s happening. 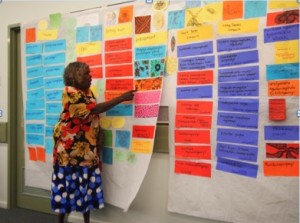 Delegates at the CRANAplus conference in Alice Springs enjoyed a presentation that explained the mental health literacy project, a part of the Ngangkari (traditional healers) Program at NPY Women’s Council (NPYWC). Uti Kulintjaku means “to think and understand clearly” in Pitjantjatjara.

A highlight was viewing an animation in language and English, which demystifies mental health issues.

NPYWC is a service delivery, advocacy and support organisation created by Anangu women from the 28 remote communities in the tri-state region of NT, SA and WA.

They use posters, paintings and animations to get across the message.

Uti Kulintjaku is working towards creating a shared understanding about how to talk about mental health.

As the powerpoint showed, the members of the Uti Kulintjaku group are sharing what they learn about mental health and trauma with families, communities and health workers.

At workshops, the group explores mental health concepts. They talk with families and posters are in communities – at the clinics, offices, stores and other public places. 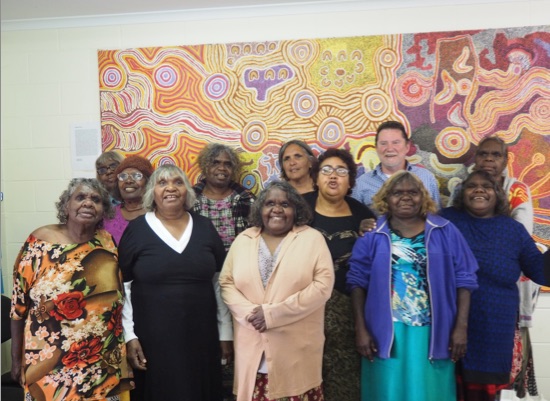 Reports from the Twittersphere 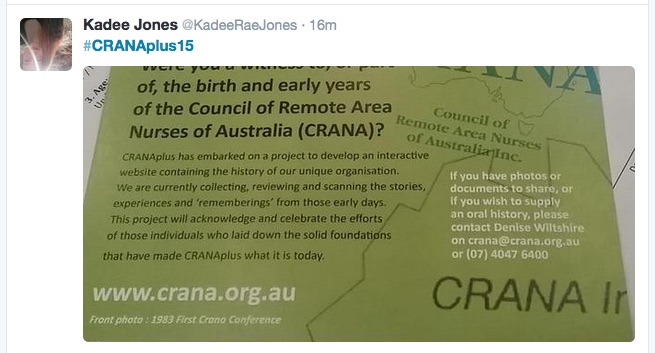 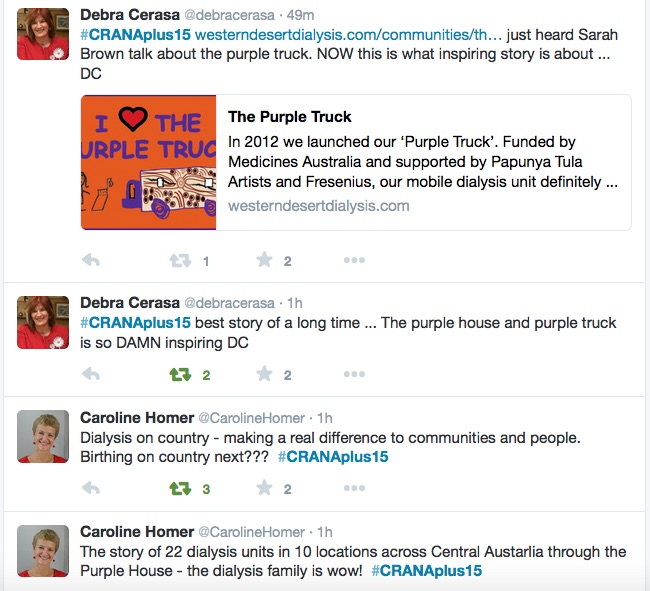 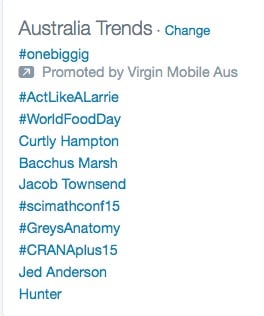 The Symplur Twitter transcript can be read here, and the analytics are below.

• The full program is here, the conference newsletter is here, and Croakey’s coverage can be tracked here.

• Freelance journalist Rosemary Cadden and editor of the quarterly CRANAplus magazine is reporting on the proceedings for the Croakey Conference News Service. Thanks also to photographer Rosey Boehm.