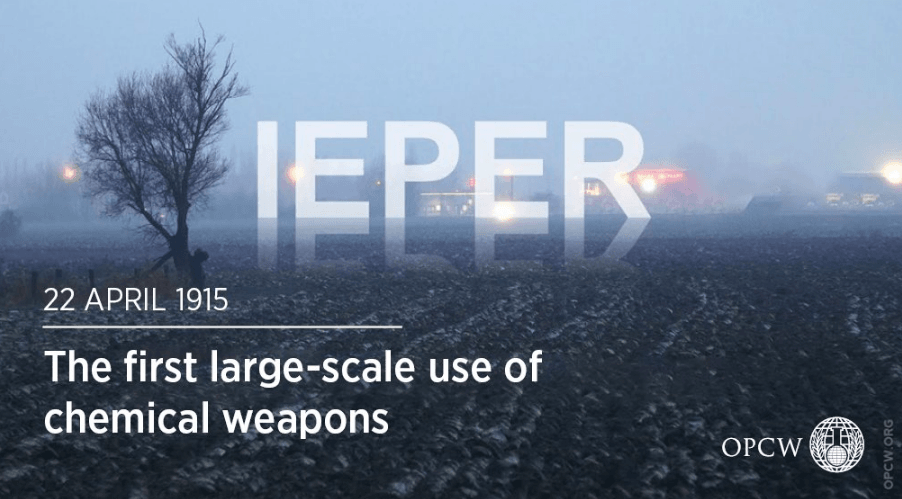 On the weekend, the Organisation for the Prohibition of Chemical Weapons  (OPCW) – tweeting at @OPCW – reminded the world that 22 April marked the anniversary of the first large-scale use of chemical weapons in leper, Belgium, in 1915 (see feature pic above).

Here’s the commemorative video it produced in 2015,to mark the centenary of the attack: https://www.youtube.com/watch?v=TKvi7K9NHxU

Also on the weekend, after repeated delays, the OPCW said it had finally been able to visit one of the sites in Syria to collect samples for analysis in connection with allegations of chemical weapons use on 7 April. In a statement, the OPCW said:

The samples collected will be transported to the OPCW Laboratory in Rijswijk and then dispatched for analysis to the OPCW’s designated labs. Based on the analysis of the sample results as well other information and materials collected by the team, the FFM (fact finding mission) will compile their report for submission to the States Parties to the Chemical Weapons Convention for their consideration.

A week after the alleged chemical weapons attack, as the OPCW experts awaited access to the sites, the US, UK and France launched more than 100 missiles, strikes condemned by Russia, China and Iran but strongly welcomed by the Australian government.

In the post below, Dr Sue Wareham, President of the Medical Association for Prevention of War (Australia), says both the strikes and Australia’s response are alarming and risk causing more harm and suffering to Syrian civilians. Expressions of concern for their welfare, she says, ring hollow when civilian casualties in wars we support are not even counted and where Australia’s overseas aid has “plummeted to all-time low levels as our military spending rises”.

The Australian Government is in desperate need of some independent and rigorous thinking when it comes to the matter of civilian suffering in times of war.

The appalling human suffering in Syria demands the most exhaustive scrutiny of all options in responding to it and preventing further bloodshed, and yet Australia appears yet again to slip easily into line behind the military responses led by our biggest ally, the United States.  Most recently, Australia gave strong endorsement to missile attacks on Syria by the US, the UK and France on 14 April, following the alleged use of chemical weapons in the town of Douma near Damascus.

The missile attacks present several major problems, none of which have been addressed by the Western coalition of nations that claim to be upholding international law.   The first is that the attacks are illegal, as they are neither conducted in self-defence nor authorised by the UN Security Council.

The second problem, and that which is of particular concern to health professionals, is that aerial warfare automatically brings with it the likelihood of further civilian suffering.  Reference to “precision” strikes is a mandatory part of official pronouncements, but when the damage is finally assessed, it often appears to have been window-dressing for what one would expect attacks on towns and cities to do – kill and maim civilians.

Further doubt is cast on the Australian Government’s stated concern for the protection of civilians by the fact that civilian casualties in the wars we support are not even counted.  When then Greens Senator Scott Ludlam asked in Senate Estimates on 1 March 2017 about the total number of casualties from the Iraq war, the Defence Department replied:

In other words, as we join in the show of armed force purportedly to protect civilians, we don’t even have so much as an estimate – in numbers of injured, sick, displaced, hungry, homeless or orphaned civilians – of the damage done in the process.  While it is extremely difficult to collect such data in a war zone, the Australian Government fails to acknowledge the estimates by other agencies of huge civilian losses as a result of the wars we support. In relation to the “war on terror” in Afghanistan, Iraq and Pakistan, the Costs of War project at Brown University in the US estimates that over 370,000 people have died due to direct war violence, over half of them being civilians, and at least 800,000 more civilians have died from the indirect impacts of the wars.

Australia’s relative lack of attention to providing relief for civilians is indicated also by the level of our humanitarian aid.  Defence Minister Marise Payne recently stated that since 2011, we have provided more than $433 million in humanitarian assistance to those affected by the war in Syria; this averages out to around $72 million each year.  That is less than we spend each day on war and preparations for war through our military budget, which is around $95 million daily.  Australia’s overseas aid as a whole has plummeted to all-time low levels as our military spending rises.

There is a further problem with sending missiles as a response to alleged chemical weapons attacks.  Military action will render accountability for these alleged crimes virtually impossible.  As with other crimes, investigations – rather than allegations – are required to establish the facts, particularly as to who was responsible.  It is reported that the recent attacks by the US and allies came on the eve of a planned visit by inspectors from the Organisation for the Prohibition of Chemical Weapons to Syria.  To pretend that punitive actions that preempt the collection of evidence are conducted to uphold international law is little short of absurd.

Meanwhile, the Australian government continues to show its contempt for the role of international law in addressing weapons of mass destruction by refusing to sign the new UN Treaty on the Prohibition of Nuclear Weapons.  Australia has in fact taken the lead in trying to undermine it.  While Minister Bishop recently stated that “the use of chemical weapons by anyone, anywhere, under any circumstances is illegal and utterly reprehensible”, she has specifically refused to rule out the use of nuclear weapons, which are far more destructive, on our behalf.

Finally, Australia’s disregard for the welfare of civilians is manifest in our ongoing  – and attempt to increase – military sales to Saudi Arabia, whose bombing of Yemen is a key factor in the unprecedented humanitarian crisis there.  PM Turnbull’s announcement in January that he wants our nation to be a world leader in the business of weapons sales means that we will have a vested interest in wars and threats of wars, with all the human suffering that they bring.

It is imperative that humanitarian aid to people in the Middle East and elsewhere whose lives have been devastated by warfare be greatly expanded, and that a political solution for the people of Syria be sought with the same determination and resources that we expend on armed conflict.

And as we preach democracy to other nations, we need to practise it at home, by discussing these issues in our parliament. Currently one person, the PM, can and does decide that we are at war. Civilians in whose countries we fight deserve a far more robust decision-making process than that if their welfare is our primary concern.