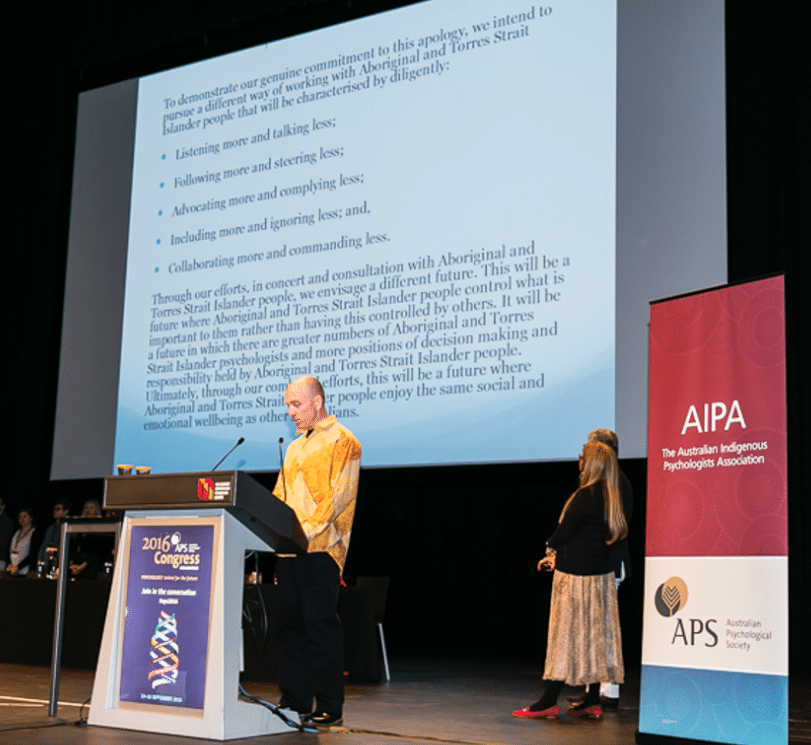 APS apology to Aboriginal and Torres Strait Islander Peoples read by Tim Carey. Also on stage is Professor Pat Dudgeon, from the Bardi people of the Kimberley in Western Australia, who was the first Aboriginal psychologist to graduate in Australia and has led work on Social and Emotional Wellbeing. Credit: APS

Time for other health professionals, systems to recognise harm to Indigenous peoples?

Introduction by Croakey: Official celebrations are this year marking the 200th anniversary of the birth of Florence Nightingale (who is also the namesake of the NHS Nightingale hospitals being set up in the United Kingdom to provide emergency responses in the coronavirus pandemic).

These celebrations also invite scrutiny of colonial and post-colonial views and practices across health systems that have caused great harm to Indigenous people around the world, including Aboriginal and Torres Strait Islander people in Australia and Maori in Aotearoa/New Zealand.

Below is the first of two related articles this week at Croakey: from psychologist Professor Tim Carey, who, at the 2016 Australian Psychological Society (APS) Congress, delivered a formal Apology from the APS to Aboriginal and Torres Strait Islander people, acknowledging psychology’s role in contributing to the erosion of culture and to their mistreatment.

He writes here about the opportunity for other health systems and professionals to take responsibility in acknowledging their historic and ongoing roles in the colonisation of Aboriginal and Torres Strait Islander peoples and to embrace the Social and Emotional Wellbeing Framework, developed by leading Indigenous psychologists, as a national standard”.

In 2016 the Australian Psychological Society (APS) delivered a landmark and historic Apology to Aboriginal and Torres Strait Islander Australians. The Apology generated national and international interest.

Nationally, there were calls for other organisations, and, in particular, other health organisations, to develop and deliver similar apologies. Dr Janine Mohamed, for example, then the CEO of the peak body for Aboriginal and Torres Strait Islander nurses and midwives (CASTINaM), called for the broader nursing profession to apologise for harms caused to Aboriginal and Torres Strait Islander peoples.

In the APS Apology, it was acknowledged that:

We, as psychologists, have not always listened carefully enough to Aboriginal and Torres Strait Islander people. We have not always respected their skills, expertise, world views, and unique wisdom developed over thousands of years.”

A commitment was given to, among other things, listen more and talk less and follow more and steer less.

Although this Apology was developed and delivered by the APS, the original idea was generated by leading psychiatrist Professor Alan Rosen who was interested in an apology from the entire mental health profession.

As Janine Mohamed has indicated, there is perhaps no need to limit the appropriateness of an apology to the mental health profession. Health service provision for Aboriginal and Torres Strait Islander peoples has, at times, fallen far below what would be considered acceptable standards of care. And beyond health, other systems and services, such as education, could reflect on the way in which Aboriginal and Torres Strait Islander peoples have been treated historically and develop a sincere and compassionate acknowledgement.

Even as the APS Apology was delivered, however, there was recognition that an apology alone would not be enough. The APS, for example, funded a series of “Beyond the Apology” workshops to provide a forum for psychologists to discuss the implications of the Apology for their practice. A number of these workshops have been provided and have, in general, been enthusiastically embraced by psychologists.

Given some events since the Apology was delivered, it is timely to revisit the original sentiment and commitment. There has been a growing appetite for recognising, and openly accepting, without discounting or minimising, the wrongs of the past.

The Croakey Acknowledgement series, for example, provides poignant illustrations of times, historically, when healthcare was not at its best at the detriment of Aboriginal and Torres Strait Islander peoples.

At the same time, there have been movements to attend to, and elevate, the voices of Aboriginal and Torres Strait Islander peoples to ensure they are heard at the highest levels.

The Uluru Statement from the Heart explicitly sought for a “First Nations Voice” to be established and enshrined in the Constitution. And finally, despite many years of clear statements from local people that climbing Uluru was disrespectful and blasphemous being ignored, climbing has now ceased.

Building on the momentum?

Now, more than ever before, there is an unprecedented opportunity to build on this growing momentum to carve out a different future for the co-habitation of Australia’s first inhabitants and those who came much later.

Will the health professions and other systems and services step up?

In a keynote address at the recent WA Rural and Remote Mental Health Conference, I suggested that the Social and Emotional Wellbeing Framework  could become a national standard for the way in which we understand and treat what we currently refer to as “mental health” and “mental illness”.

Will that aspiration be realised? What will be the mechanism by which the voices of Aboriginal and Torres Strait Islander peoples are heard and appropriately acted upon?

Will we embrace self-determination not as a human right but as something much more fundamental: as a property of the way we are designed in the same ilk as cell regeneration and neuroplasticity?

In order to gain some appreciation of the current “appetite” in the health professions, I contacted a number of professional bodies late last year to ask if they knew of the Apology and if there were plans within their own organisation to adopt a similar initiative.

To date, I have heard back from nine organisations.

Responses included: indicating they would get back to me at a later date; thanking me for raising it and indicating they would take it to their Board for discussion; prioritising other initiatives at the moment such as a Reconciliation Action Plan or an Indigenous Strategic Framework; and one organisation didn’t feel that it was appropriate given the type of organisation they are.

Aboriginal and Torres Strait Islander Australians have been waiting for us to catch up for a very long time. Are we ready to take their hand and step into a more respectful, more balanced, and more humble future? The coming days, months, and years will reveal our answer to that question.

Professor Timothy Carey has a PhD in Clinical Psychology, an MSc in Statistics, and a PostGraduate Certificate in Biostatistics as well as tertiary qualifications in teaching. Prior to his current role, his most recent academic roles have been Professor and Director of Flinders University’s Centre for Remote Health and Charles Darwin University’s Professor of Clinical Psychology in Health Equity in Alice Springs. He is currently the inaugural Director of the Institute of Global Health Equity Research and the Andrew Weiss Chair in Research on Global Health at the University of Global Health Equity in Rwanda. Carey has served two terms as a Director with the Australian Psychological Society (APS) as well as two terms as its Vice President.