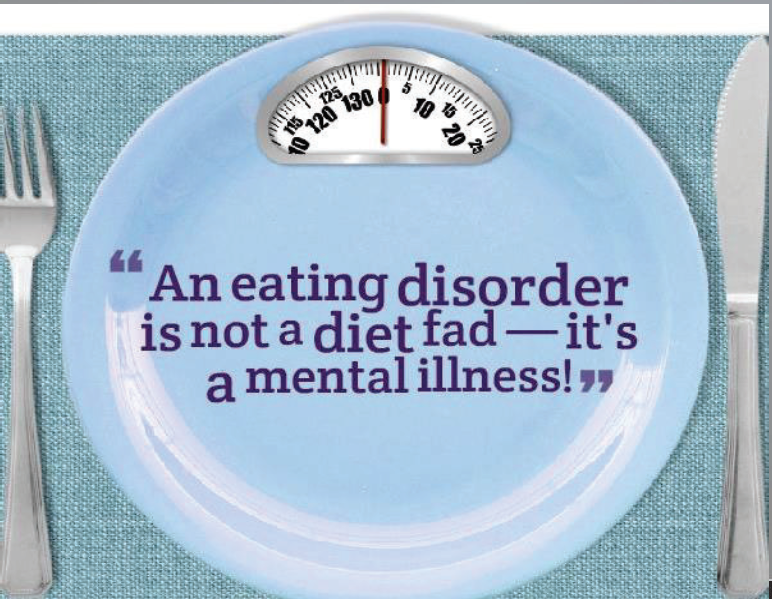 Eating disorders have been put front and centre of the Morrison government’s mental health platform, with dedicated treatments available under Medicare for the first time from later this year.

While the unprecedented focus is welcome news for the estimated one million Australians living with an eating disorder, is a system still mired in stigma ready for the challenge?

These were some of the questions raised at a standing room-only session at the recent Royal Australian and New Zealand College of Psychiatrists’ Congress in Cairns, #RANZCP2019.

Croakey journalist Marie McInerney was there for the Croakey Conference News Service, and shares this piece on “seismic shifts” in eating disorder management.

Psychiatrists have been urged to confront the enormous stigma experienced by people with eating disorders in the health system, with their specialty to become “gatekeepers” of the first dedicated treatments available under Medicare later this year.

Clinical psychologist Dr Anthea Fursland told the recent Royal Australian and New Zealand College of Psychiatrists (RANZCP) annual congress in Cairns there were still too many community mental health clinics and psychiatric units saying “we don’t do eating disorders” because of stigma and/or anxiety around treating such a complex condition.

“I’m here to remind you that eating disorders are mental illnesses – they’re in the DSM-5,” Fursland, Director of the Western Australian Eating Disorders Outreach and Consultation Service, told a packed session at the congress.

According to the Federal Government, eating disorders have one of the highest mortality rates of any psychiatric illness – with anorexia “by far the deadliest mental health condition in Australia”.

They are also stigmatised “more than schizophrenia or depression,” said Fursland.

She cited a small 2006 study which looked at the perceptions of nearly 100 people in the wider community about four people – one who was healthy, one with asthma, one with schizophrenia, and one with anorexia nervosa.

The study found that participants viewed the person with anorexia nervosa as most to blame for their condition, best able to pull themselves together if they wanted to, and  “most acting this way for attention”.

It’s an enduring myth about anorexia  and other eating disorders, Fursland told the congress:

People think if they just ate, they would get better, that it’s all about vanity.

Many people in this room have chosen to go on a diet. That’s very different from choosing to have a serious mental health issue.”

There was both a professional and personal imperative for health professionals to better understand eating disorders, and to dispel the myth that they only affect a particular type of person – “models and gymnasts and dancers” — delegates heard. 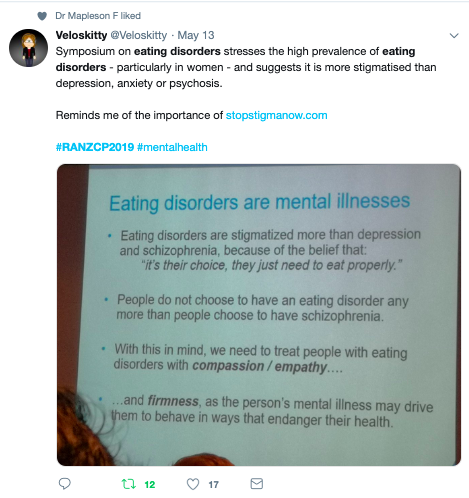 Federal Health Minister Greg Hunt, who was reappointed to the portfolio following the May 18 election, has emerged as an important advocate for better management of eating disorders.

Described by advocates as a “seismic shift” in treatment options, it will provide access to up to 40 psychological services and 20 dietetic services each year.

Hunt highlighted the package throughout the recent election campaign as a key plank of the Coalition’s mental health platform, and followed up with a $70 million pledge to establish six residential eating disorder centres across the country, and fund national coordination for treatment.

Along with paediatricians, psychiatrists will have a key role in the new regime, acting as “gatekeepers” after the first 20 sessions.

Fursland said it’s critical that they refer patients to specialists who are trained in evidence-based treatments for eating disorders, such as cognitive behaviour therapy and family based therapy, or their conditions will likely “remain or worsen”.

The Medicare package was launched at a high profile event in December, where former Olympian Jana Pittman spoke with raw honesty about her 13-year battle with bulimia, including a serious episode the night before the 2007 World Championships.

I went down to the dining room and ate everything I could get my hands on, everything. All the desserts, all the food you could possibly think of.

And then it set in – the guilt, the fear, the shame, and I spent at least an hour or two hugging the toilet bowl trying to rid myself of that pain and guilt.”

The next day she won gold and became the world champion – but she said she kept her “guilty secret” hidden for years, “because I was so afraid of what people would say.”

The event also heard a heartbreaking story from one of Hunt’s constituents.

Fiona Ryan talked about her daughter Tess, who developed an eating disorder when she was 11, and tragically died from suicide at 17.

As well as the personal grief, Ryan detailed the toll — both personal and financial — of trying to source the right treatment.

We took long service leave, carer’s leave, leave without pay, we went part-time in our workplaces and we went into debt to make sure we did what we needed to keep her alive.

We got a mental health plan for Tess and her ten visits to the psychologist were finished before the beginning of term one. So we paid for the other 42 visits a year ourselves.

Because her illness created all kinds of physical problems we visited dieticians and physios and felt like it was an endless round of doctors and medicos and bills and worry.

You can’t truly understand what living with an eating disorder is like until it comes to your house.

Ryan said the family often felt like it fought on two fronts.

“We fought an eating disorder, and we fought the system in order to get the recognition, support and treatment that Tess needed,” she said.

‘These are not rare disorders’

The Western Australian Pregnancy Cohort Study is one of the largest successful prospective cohorts of pregnancy, childhood, adolescence and now early adulthood to be carried out anywhere in the world.

Also known as the Raine study, it enrolled nearly 3,000 pregnant women and captured 2868 live births between 1989 and 1991. These families have since provided environmental, developmental and health information over a wide range of topics.

That suddenly jumps in the next few years. By 17 years, one in six young women has an active eating disorder, and rates for males are beginning to creep up.

“These are not rare disorders,” Fursland said.

Yet there is reason for optimism, particularly if there is very early intervention, within six to 12 months of onset. One US study offered even longer-term hope, she said.

“If you’re faced with a patient with a ten or 15-year history of anorexia nervosa, do not give up on them, they do have a chance of recovering,” Fursland said.

But the session heard there are many barriers and risks, including to lives if doctors and other emergency personnel don’t know enough to recognise when a condition is fatal.

Dr Vash Singh, clinical lead of the inpatient eating disorder service at Hollywood Hospital in Perth, said most people with eating disorders can get better outside of hospital.

But the biggest risk, she said, is unintentional death due to starvation or purging.

“You’ll see these people in an Emergency Department and they look okay. They can say they feel great, everyone around them is amazed at how bright they are and how well they can engage in conversation, and the ED physicians will tell you their bloods are normal,” she said.

“All of that can happen, but they can still die suddenly from cardiac arrhythmia, which is how most people with anorexia nervosa die,” she said.

Another big concern is that not all eating disorders are detected, with estimates that only 25 percent of cases are diagnosed.

Fursland said that can be a particular worry for people who have comorbid mental illnesses, as she witnessed during her 12 years at Perth’s government-funded Centre for Clinical Interventions (CCI) for anxiety, depression, bipolar disorder, and eating disorders.

At one point she asked colleagues in the anxiety and mood disorder stream to screen their patients for eating disorders.

“They found that 7 percent of their current patients had a current eating disorder which had gone undiagnosed by the referrer — mainly GPs or psychiatrists — and the psychologists themselves.”

Fursland recommends that every mental health outpatient should be screened for eating disorders, using a protocol such as SCOFF: 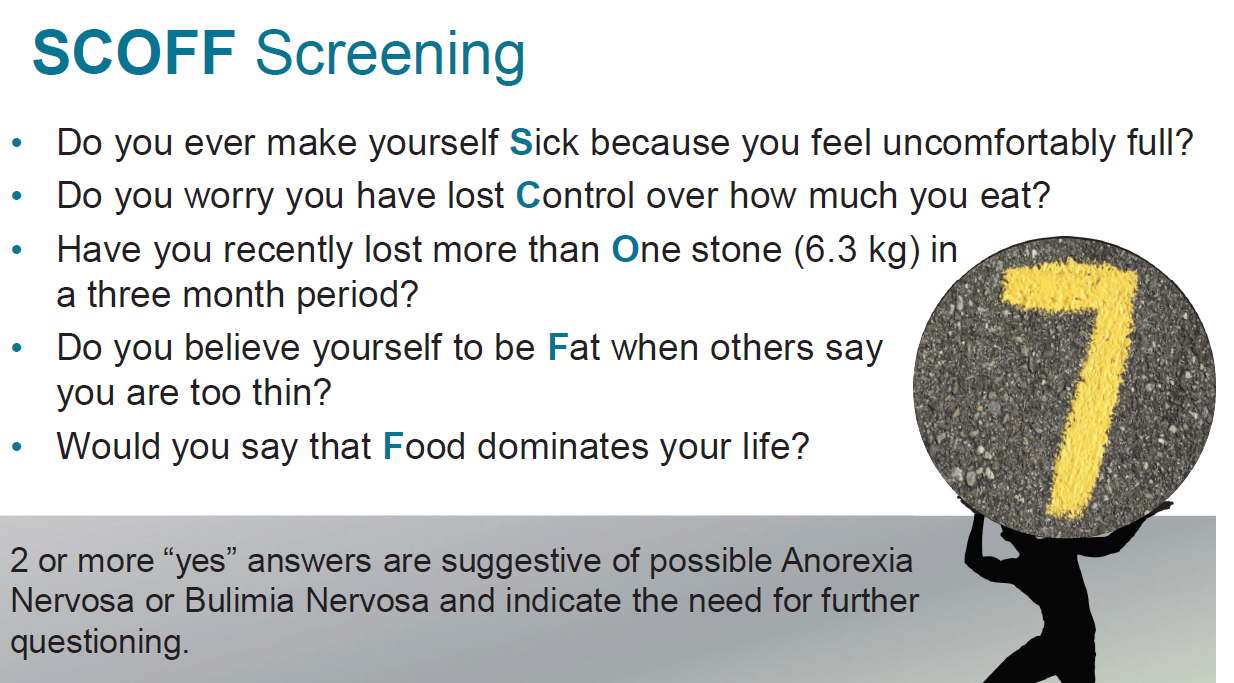 Starvation and the brain

The RANZCP session delved into another landmark study, the Minnesota Starvation Experiment, which was conducted in the midst of World War Two.

Using a group of 36 conscientious objectors who took up residence in the corridors and rooms of the University of Minnesota football stadium as subjects, the nearly year-long experiment explored the psychological and physiological effects of starvation.

Dr Lisa Miller, a consultant liaison psychiatrist at Sir Charles Gairdner Hospital in Perth, said the men all experienced physical changes that were expected in response to starvation. They lost, on average, 25 percent of their baseline body weight, with big drops in strength and stamina, pulse rate, body temperature, heart rate and metabolism.

But there were also unexpectedly dramatic impacts on their physiological, psychological, cognitive, and social functioning, including increased apathy, depression, tiredness, irritability, poor concentration, narrowness of interest, rigidity of thinking and poor decision-making.

Miller said it’s an important lesson for health professionals to remember when dealing with a patient with an eating disorder they consider to be “strange”.

“Noone is odd till they’re well nourished and odd,” she said.

“It’s amazing what nutritional restoration can do to someone in that state.” 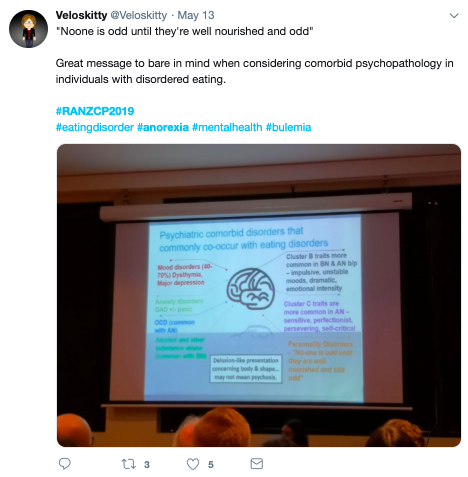 In a cruelly vicious cycle, the cognitive impact of the eating disorder can actually perpetuate the condition, Miller said, referring to research showing that starvation of the brain affects people’s decision-making capacity.

Given psychotherapy is the mainstay of eating disorder management, starvation limits the person’s capacity to participate in their own recovery.

It’s the paradox of eating disorder treatment, she said.

“What is needed for your brain to recover is also that which you most fear,” said Miller.

“With starvation, you drive the eating disorder and it is like a freight train.”

This is why, she said, psychiatrists have a really critical leadership role in looking after people with eating disorders: “because we do understand the biopsychosocial approach to mental illness”.

This is the latest in our #RANZCP2019 conference reporting series. Bookmark this link to read our coverage to date, with more to come.