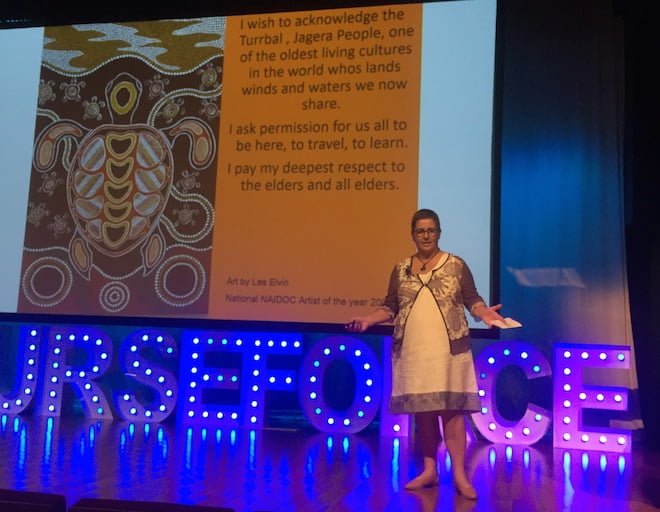 Too many health professionals still act like they know what is best for all Aboriginal people, and health promotion can be unhealthy and unproductive when it is “top down”, according to Lesley Salem, a former Australian Nurse Practitioner of the Year.

Salem, who is based at a new primary health practice in the far north Queensland town of Doomadgee, delivered a keynote address at the recent Australian Primary Health Care Nurses Association (APNA) 10th Annual National Conference in Brisbane.

She raised concerns about health promotion and professional practices that can be counterproductive, particularly for Aboriginal and Torres Strait Islander people. (She also had some tough messages about how the health system and government funding make nurse practitioners like her “invisible” and unemployable within a business model – more on that in another article to come).

Marie McInerney reports on Salem’s speech below, as part of her continuing coverage of #Nurseforce for the Croakey Conference News Service.

Lesley Salem opened her keynote address at the #Nurseforce conference with a confession, joking that she had come over to primary health care nursing “from the dark side”, after working first for two decades in acute hospital nursing.

It was a nod to a recurring theme at the conference on the value of primary health care nursing – for example, nurses based in general practice and the community health sector – but also ongoing frustration that it is often still seen within the profession itself as a “soft option” in comparison with hospital nursing.

Moving from acute to primary care has been a serious conversion for Salem, an award-winning nurse practitioner and descendent of the Gringai-Wonnarua Nation in New South Wales who has worked extensively with Aboriginal medical services in her home state.

“I held very poor attitudes,” she said. “I was silo driven, felt that ‘we in renal and cardiology and diabetes, we know it all’.”

But over time her approach shifted. She said:

I got fed up with patients not receiving timely appropriate care. I got sick of being dragged in three or four times a week to do acute dialysis or something… I’d be sitting there thinking: ‘if only that patient had had their blood pressure medications reviewed, or had better heart failure management, if only that person had been put on a fluid tablet…if only… if only… if only’.

I was very saddened and tired of working downstream in chronic diseases, always with people with end stage renal failure, complex diabetes with complications, heart failure. I realised in hospitals you’re just a bandaid, it’s too late, they’re in end stage this and that.

I wanted to work upstream and do prevention, aiming for early recognition, remission, regression or improved chronic disease management.”

“Coming into the light now”

Salem now works for Gidgee Healing, an Aboriginal community controlled health organisation in Doomadgee, just south of the Gulf of Carpentaria (see map) which represents the health needs of around 11,000 Aboriginal people residing in the Mount Isa, North West and Lower Gulf regions of Queensland.

Salem told Croakey that Doomadgee has long had a small hospital, but health officials wanted a Primary Health Service there to help deal with many complex health issues and poor life expectancy (just 55 years).

“It’s meant to be doctor and nurse led, but it is sometimes difficult to recruit to remote areas, (so) at times, as a Nurse Practitioner, I take a lead.”

For her keynote, Salem said she wanted to talk to delegates about health promotion in Primary Health, to inspire them “to do a ‘bottom up’ approach”, to draw on lived experience, health promotion theory, and the data that can reveal the priorities of local communities.

“We’re not going to do this paternalistic hyperbolic thing that rams messages down their throat,” she said.

Below are some of her key messages, from a one-hour keynote and follow-up interview with Croakey (which you can watch below).

Salem said many health promotion campaigns fail or have “very unanticipated effects” because those designing them don’t understand local communities.

Nor are they always designed for how local people will hear the health messages, not just due to speaking different languages, including “Aboriginal English”, but because orf what the messages make people “feel”.

When it’s a top down approach you don’t always realise the social justice implications of what you’re doing or the stigma that may be attached.

To flood an area with (promotions) about STIs (sexually transmitted infections), domestic violence or heart diseases…sometimes the community takes from that that they’re dirty, or that no-one there is well.

There’s a stigma attached…some health promotion strategies leave patients feeling that the whole community is viewed with that lens.”

One woman had told her: “Everybody’s coming here and saying ‘we’ve all got this, everyone at Doomadgee has got STIs’… Other Aboriginal Medical Services have struggled in the past to get Aboriginal Health Workers to help with STI care “because it’s such a shame (issue).”

Echoing the concerns of many other Aboriginal and Torres Strait Islander communities, Salem said it can be the same with messages about alcohol and family violence: “Everyone is tarnished.”

Salem said some visiting specialists come with a retinue of registrars and trainees, excited to be “going to a real Aboriginal community!”.

“They’ll ask (the patient) if it’s okay that the whole group sits in on a consultation, but the patients are already nervous about their health and the consultation and don’t feel able to say no. Many people staring at them and they’re intimidated. They can’t understand a word. You’re swanning in…embarrassing and shaming those (patients).”

Later, she said, the specialist might comment that the patient had given permission, had said ‘it was okay’.

But the reality was: “He didn’t say it was okay. His body language was saying ‘I’m shamed here’.”

As well as causing indignity and embarrassment, such paternalism means that health promotion and health care messages “will get lost’, Salem said. She added:

Often people come in, they’re taking the moral high ground: ‘I know what’s best for you’. (I think): ‘Well you would have been a really great white master in the days of the mission because they also knew what was best’.

Knowing what’s best for physical health does not mean you know what is best for past trauma or quality of life.”

Another turn-off for patients and community members, she said, was the future orientation of many health promotion campaigns, with messages such as: ‘if you stay fat, you’ll die’.

That’s particularly so, she said, for communities that struggle from poverty and trauma where, by necessity, people are more focused on the past and the present, than on the future.

Salem said many Aboriginal people live in “a past and a present: the past was our richness and dignity, and the present is trying to navigate for survival”.

I’m 57 and was not counted as an Australian till I was seven years old (after the 1967 referendum). It’s a very new wound…not being able to speak your language, practise your culture, practise your medicine…

Messages need to be geared to the now, what they can think and feel now.

All of us in health fail to remember that clients can be the architects of their own future: stuffing it down their throats does not make them hungry for the health choice.

Many threats have been around for so long that their messages have lost their force. It’s important you don’t kill your message with overkill.

People make decisions with what they can live with so you don’t know better than the patient….It’s for us to inform and leave the decision to the person. (When health professionals say) ‘I’m only doing this for you’, it’s in a tone that’s meant to guilt you into doing something.”

Salem quoted former US President Barrack Obama from an address to university graduates, warning that “we live in a culture that discourages empathy”.

That lack of empathy emerges in health care, she said, when patients don’t do as health care professionals say. It can be heard in comments like: “God, she never takes her tablets, she hasn’t even bathed for three days.”

She said: “A prejudice becomes evident and empathy goes out the door. It’s about paternalism, not about helping that person to be the best person they can.”

Salem warned that many public health and health policy decisions are made by “experts” whose life experience may share little with those of the clients whose interests they are serving.

Decisions may also be based traditional models of health that may be too narrow in their outlook and not what local communities want, she said.

She recommended two sources for ‘bottom up’ health promotion:

In some areas, Salem said, the local priorities might be skin sores, or otitis media, a middle ear infection that causes hearing loss and is experienced more by Aboriginal people than any other people in the world.

Her practice did ear nose and throat checks at one school in the lead up to a swimming carnival. Of the 260-plus kids, 90 had otitis media.

Picking up these conditions is vital for the long-term health of each child or young person but the impact goes way beyond the clinical, she said.

Scabies or hearing problems might mean that children and young people are missing out on school (often for long periods of time, depending on the school’s rules and the access to treatment) and that parents have to miss work.

Thus it was important, when looking at what health promotions to plan and implement, to want to empower patients and the broader community.

Salem quoted her father, a Wonnarua Elder, as believing that “if you want change, start with the kids”.

She has seen that in action in areas she has worked where focused health education at schools is changing young people into “health seekers”, rather than being very reluctant to engage on health care, for many reasons including institutional racism, like their parents and grandparents.

Now, she said, the practice gets kids coming in saying, “Hey, I got one of them sores”. The practice rings for permission from a parent, then treats the child immediately.

She says it’s important to consult with the whole community on what might promote health. Ask the mums what time they need the practice to open. Ask the schools what health issues need to be addressed so kids can come to school.

But even then, she says, don’t assume that your clinical solution will get those kids back into school, if that’s your health promotion goal.

Salem says many families in communities like hers cannot respond to health issues because they don’t have the resources to deal with them.

For example, she says, if health professionals want to tackle health conditions like scabies in some Aboriginal communities, they may need move the clinic to the school for an hour or so each morning, or involve organisations like Save the Children to provide industrial washing machines for the whole community to use as many households won’t have their own to keep linen clean when skin infections are being treated.

You can provide the treatment and advice but get others involved in helping to make soap…encourage regular showering with traditional medicine soaps and where washing can be done.

Bottom up health promotion involves everyone in the community dealing with it.

You’ve got to be guided by a concern for equity and social justice.” 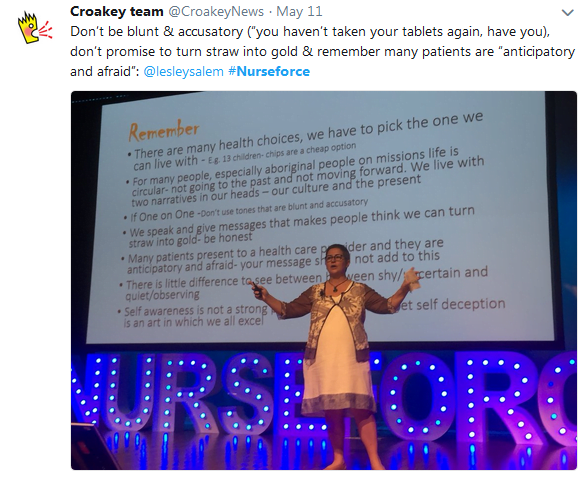 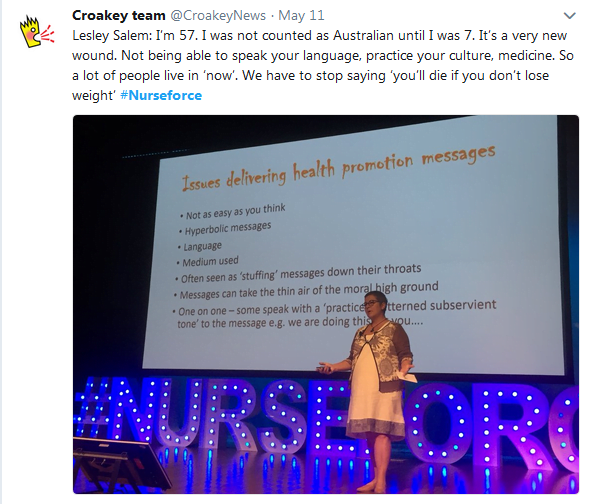 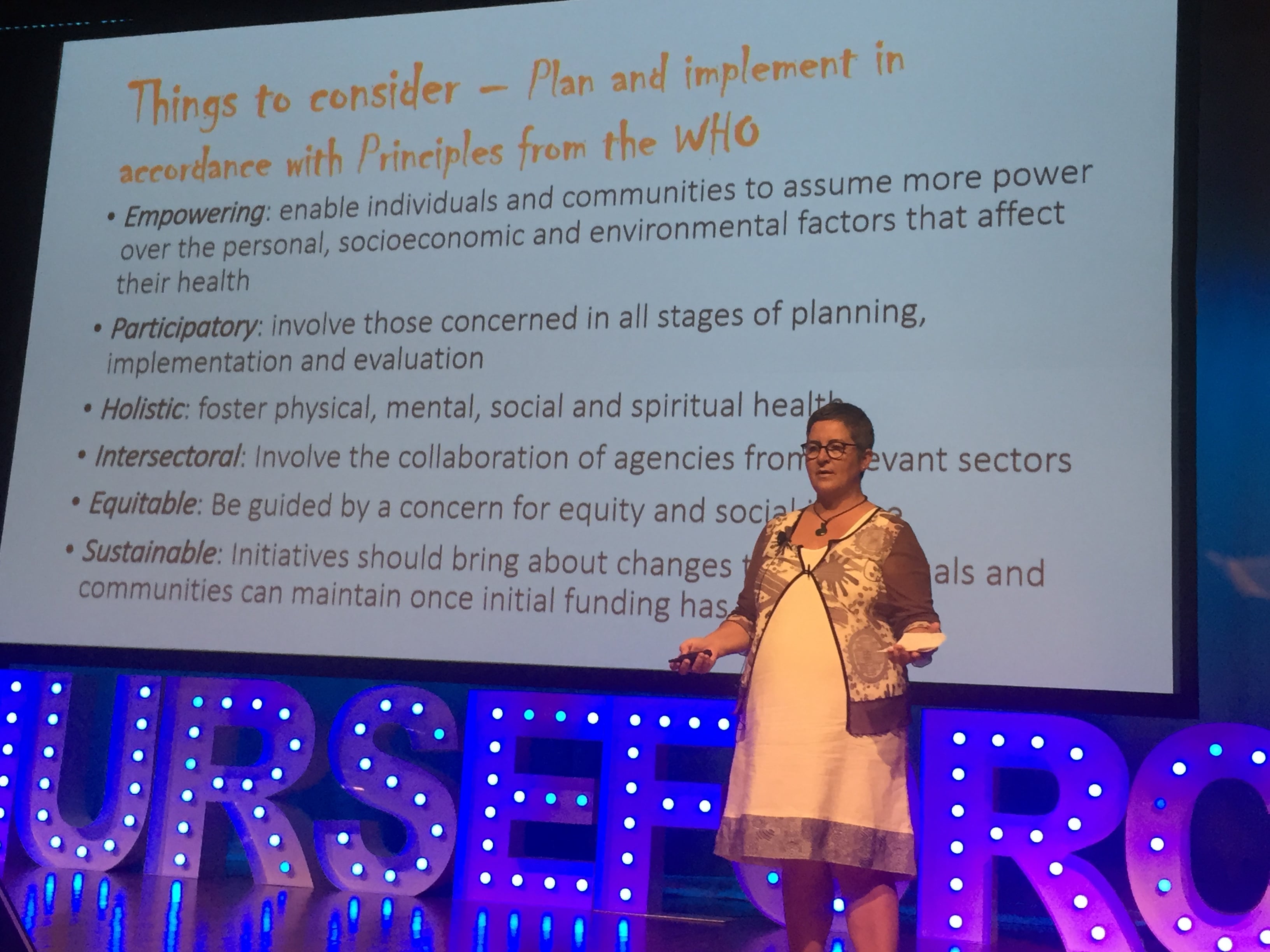 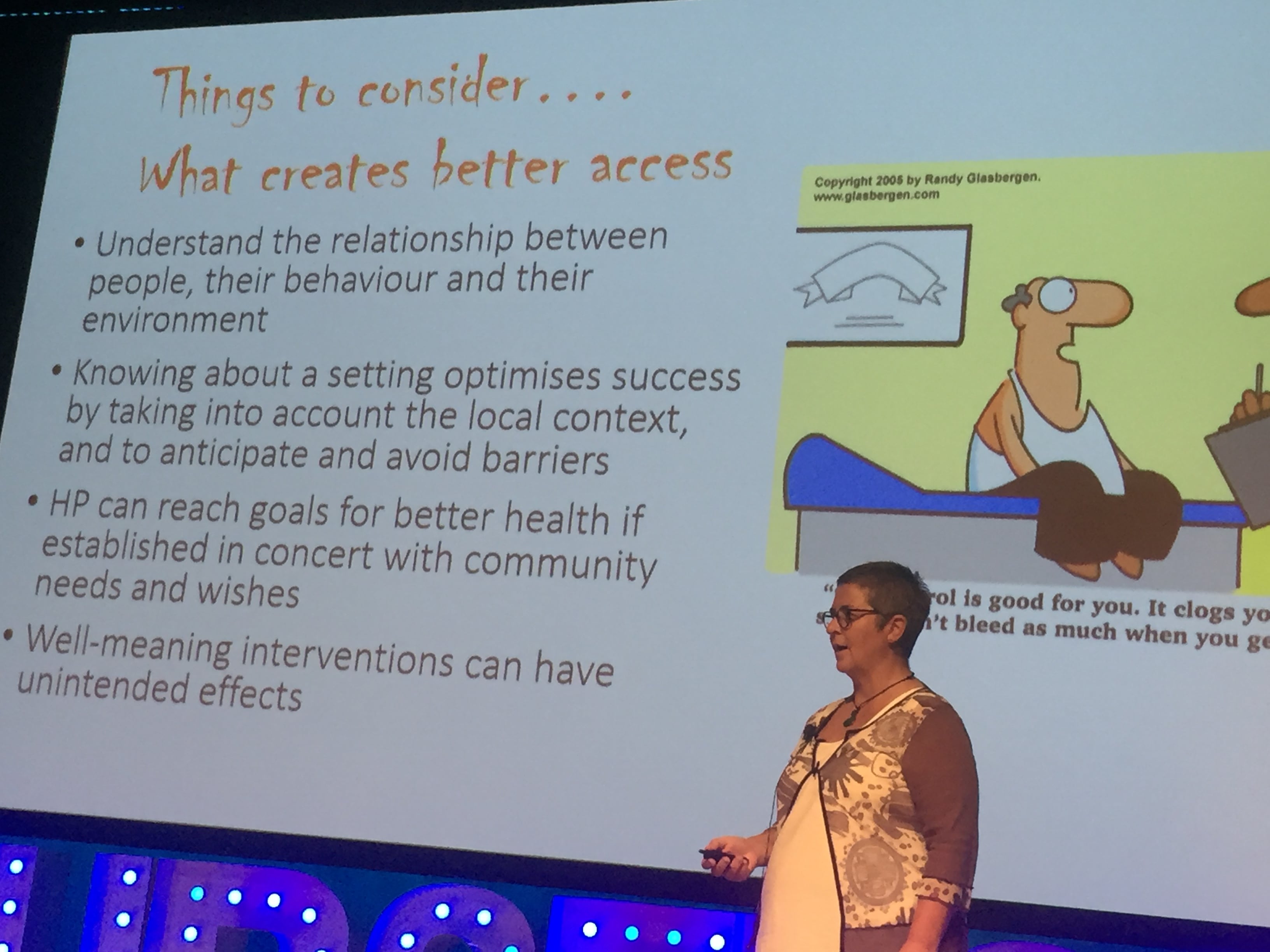 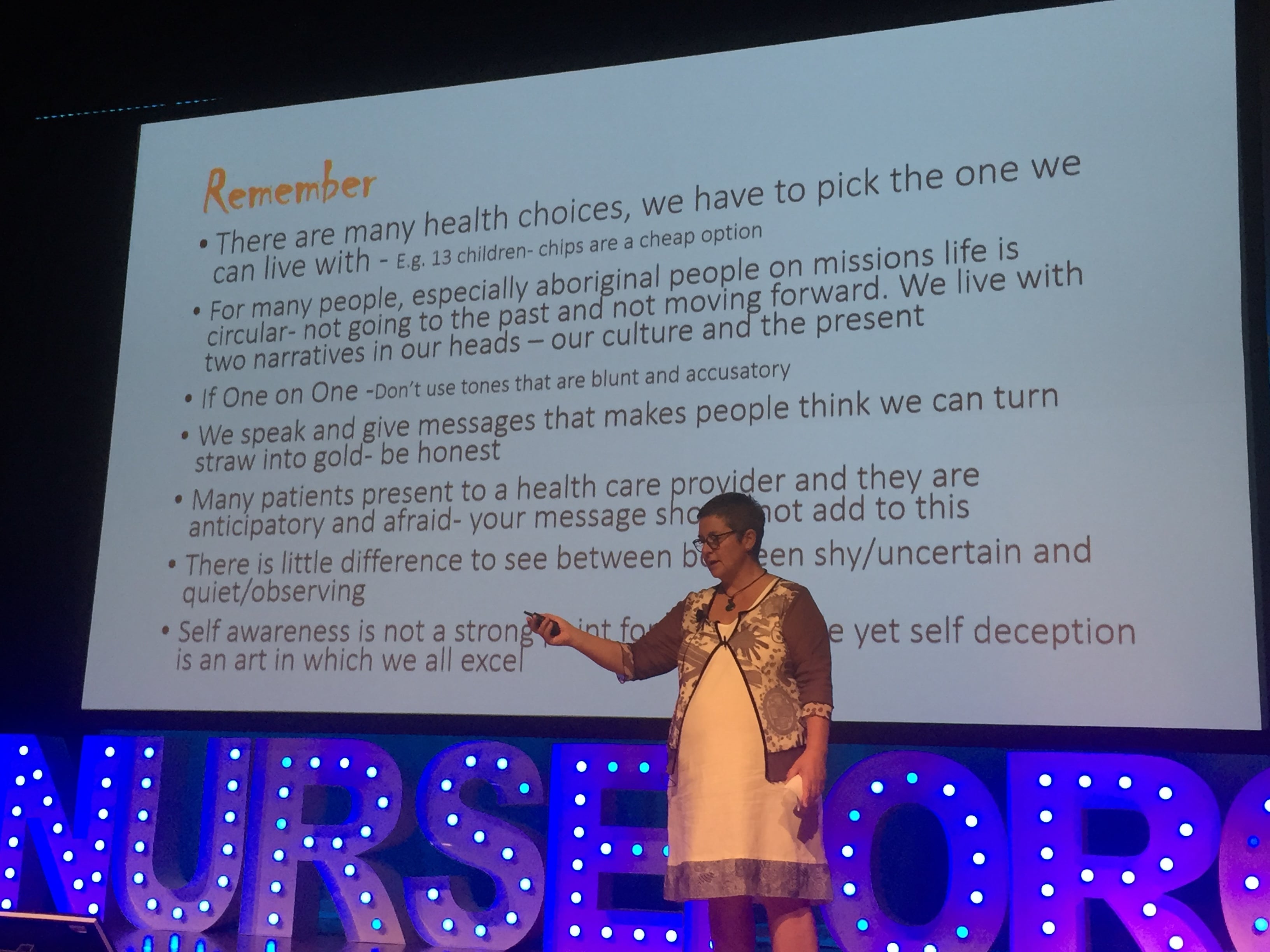 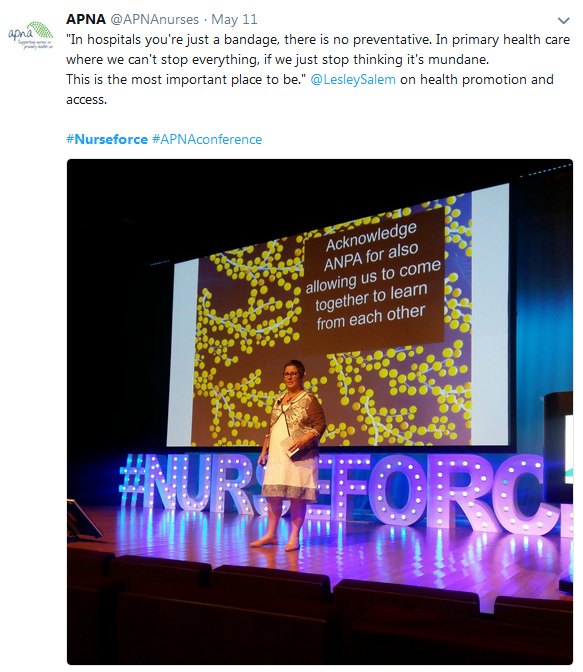 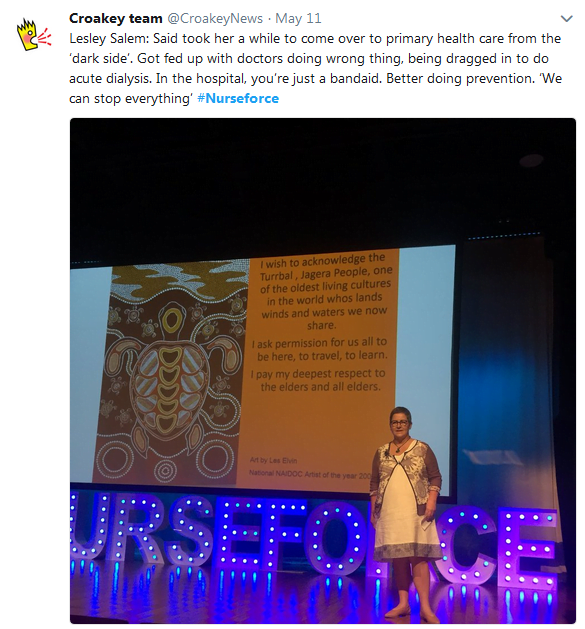 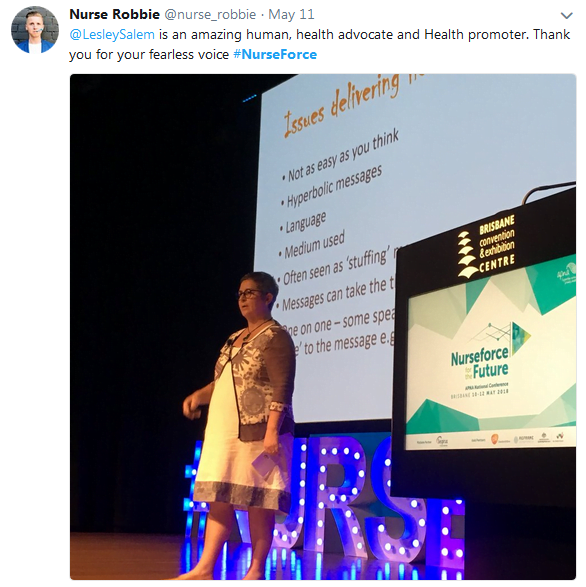 Bookmark this link to follow Marie McInerney’s ongoing coverage of the conference.