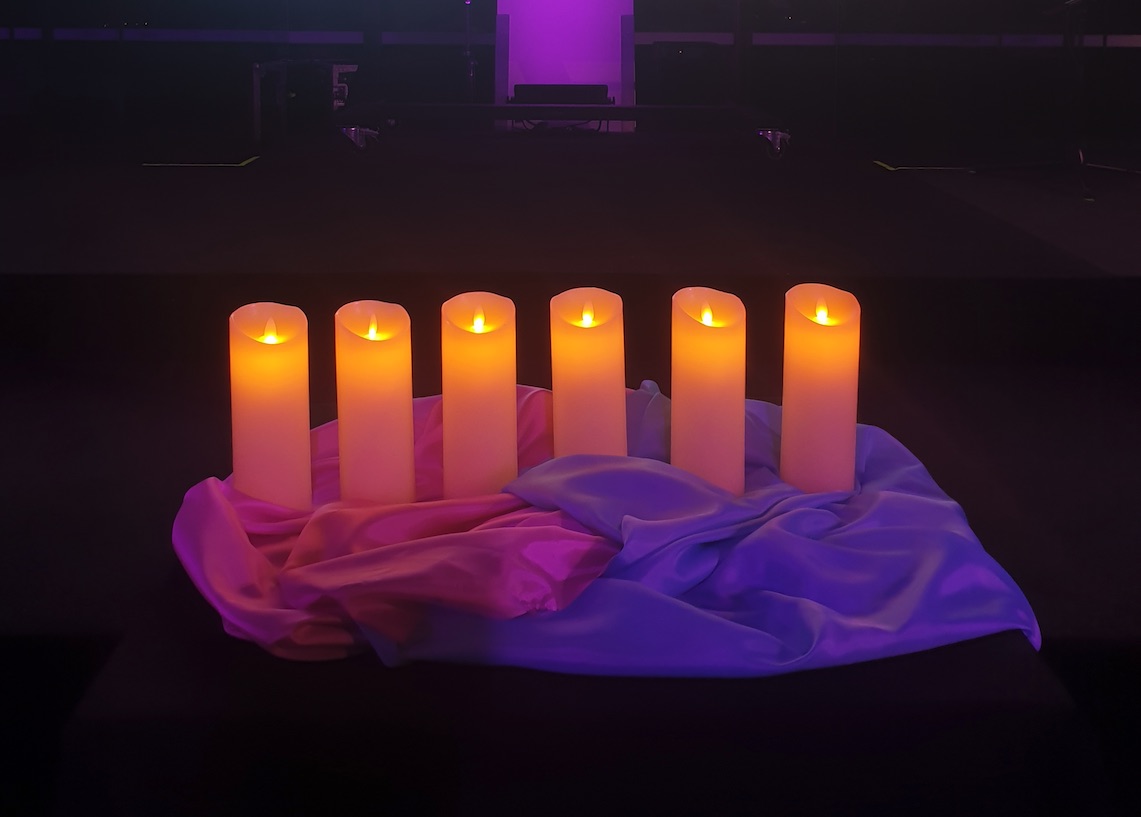 To reduce stillbirths, we must tackle substandard care

About 200 stillbirths in Australia every year are preventable, with up to a third of all cases due to substandard care, a major meeting of the country’s obstetric doctors heard in Melbourne last week, where the importance of communication and education was emphasised as the Federal Government rolls out a major new initiative in antenatal care.

Health Minister Greg Hunt launched the Safer Baby Bundle in Canberra last Tuesday, a national project aimed at reducing the number of stillbirths in Australia after 28 weeks’ gestation by 20 percent by 2023.

The Safer Baby Bundle launch, which was held on International Pregnancy and Infant Loss Remembrance Day, coincided with the annual scientific meeting of the Royal Australian and New Zealand College of Obstetricians and Gynaecologists (RANZCOG), the peak training and advocacy body for women’s health specialists, and it was the focus of a packed session for delegates. 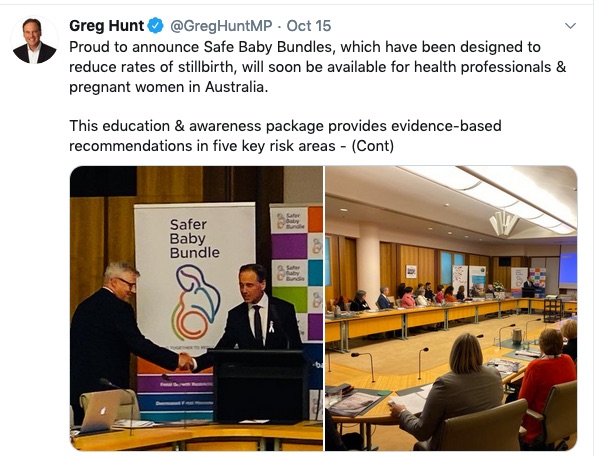 Similar programs have been rolled out with success overseas, reducing stillbirth rates by one-fifth Scotland and the UK, and a Senate inquiry into Australia’s stillbirth rate – 15th highest in the world and little-changed over the past two decades – recommended rollout of such an initiative here.

The RANZCOG session took attendees through the detail of the bundle, which will accrue Continuing Professional Development points for members of RANZCOG, the Australian College of Midwives, and GPs.

The session also featured powerful talks from stillbirth advocate Claire Foord and Torres Strait Islander obstetrician Dr Beth Campbell, both of whom shared insights from their lived experience in the system.

Townsville specialist Dr David Watson also made the case for Aboriginal Controlled Community Health Organisations and Birthing on Country services, showing that they had a demonstrable impact on maternal and perinatal outcomes and would be key to closing the gap on stillbirth in Indigenous communities.

Setting the scene for the session, neonatologist Dr Adrienne Gordon said the Safer Baby Bundle was “all about what we know works but isn’t being done” in Australia, where stillbirth rates are 35 percent higher than in the best-performing countries and where it was estimated that 20-30 percent of all stillbirths were attributable to substandard care.

Professor Euan Wallace, an obstetrician who is also the CEO of Safer Care Victoria, said about 200 excess preventable stillbirths occurred each year in Australia. This was laid out in forensic detail by the Senate inquiry report, which he described as “galling” reading.

Victoria has led the way on this issue, establishing a perinatal data registry almost 40 years ago. Under Wallace’s stewardship, it was also the first state to roll out the Safer Baby Bundle at a state level earlier this year.

But Wallace said simply reporting the numbers was not enough:

We have to do something with those numbers.

And perhaps as a profession we haven’t been doing enough.” 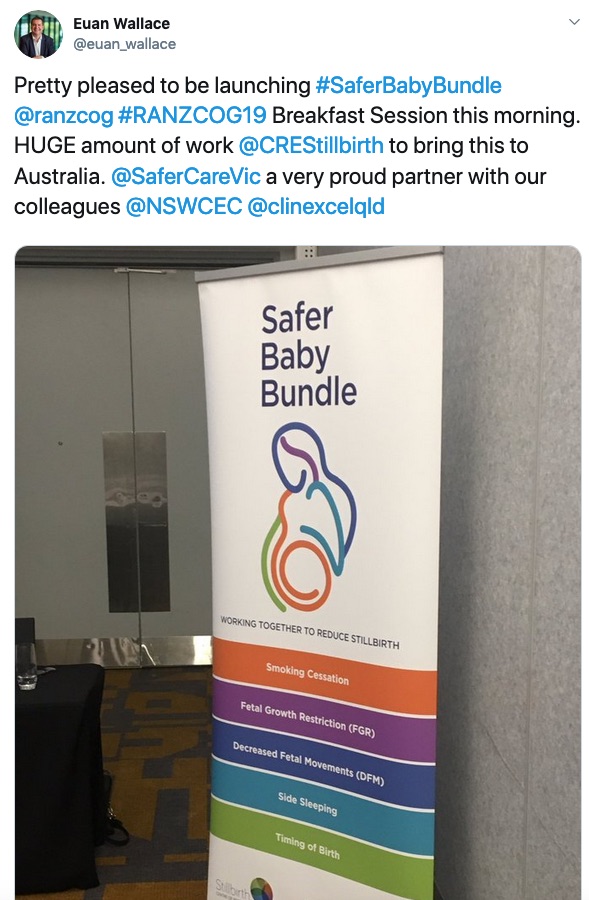 Importance of ACCHOs and Birthing on Country

Gordon emphasised that while the Safer Baby Bundle was an important initiative, it must be accompanied by improvements to maternity services, particularly increased access to midwifery continuity of care models for all women – especially those at risk.

This was very much supported by Watson’s presentation, which showed that for Indigenous women, ACCHOs and Birthing on Country services had transformative potential for perinatal mortality.

In Queensland, where he practised, Watson said Indigenous women were 1.7 times more likely to have a stillbirth, and that gap was wider still for Torres Strait Islander women (12 in every 1,000 births) compared with Aboriginal women (9.3 in 1,000).

He presented a study from Townsville showing that, compared with care as usual, antenatal services delivered through an ACCHO framework halved the rates of preterm birth, delivered babies that were 150g heavier on average, and – most importantly – significantly reduced perinatal deaths.

Among the ACCHO group, the mortality rate was lower than not only the control group but also better than the Queensland average. Watson presented studies from Brisbane and Perth that mirrored the Townsville findings.

Watson also revealed that, in contrast to non-Indigenous women, where congenital anomalies were the leading cause of perinatal death, among Indigenous women the majority of stillbirths were classified as ‘unexplained antepartum death’.

This reflected, in part, that rates of autopsy were much lower, he said, sharing a recent paper that explored some of the reasons why.

Unsurprisingly, the way in which the conversation was handled  – between clinicians and parents about having an autopsy done, whether they want one, why it would be done, what it would involve – was shown to have a major impact.

Campbell, whose family are from Saibai Island in the Torres Strait, said many aspects of routine antenatal care weren’t a priority in her community and “it is not that women don’t want to engage or present, but transport and other things taken for granted on the mainland” were real issues.

For many Indigenous women, Campbell said English was their second, third, fourth or even fifth language and “the more they say ‘yes’, the more they mean ‘I don’t know what you are talking about’.”

Instead of asking so many questions, she urged colleagues to stop, allow spaces for silence in these consults, and really listen.

If RANZCOG was really serious about improving antenatal care for Indigenous women, Campbell said they needed to do more on equity of representation, with just three fellows, five trainees and a handful of diploma affiliates who identified as Aboriginal or Torres Strait Islander.

Improving diversity at the College has been identified as a major issue, with a Working Group report launched at the ASM setting targets to boost the number of women in leadership, and highlighting Indigenous representation as the next priority for action.

Communication was also a major theme for stillbirth educator Claire Foord, who delivered a stirring keynote on the death of her daughter, Alfie, at term, in 2014. She detailed a series of lost opportunities and miscommunications with her health care providers in the final weeks of her pregnancy which, had they gone differently, may have saved Alfie’s life.

Foord urged obstetricians to talk about the risks of stillbirth from the very first visit, saying too many families like hers were “blindsided” when it happened to them.

“Things are only rare until you look at them through your own eyes,” Foord told a packed auditorium of specialists. “I think it’s way too common not to be talked about. If we could see these lives being lost in the street we would be doing something about it.”

Instead of closed questions like ‘is your baby moving’, Foord urged doctors to invite a conversation with their patients by asking them to describe the movements, and to explain that it wasn’t just how often their baby moved, but the strength and pattern or timing that mattered.

She also encouraged clinicians to compassionately and comprehensively debrief their patients after a stillbirth, not only to help with grief and healing but because, just like an autopsy, it could offer important clues to inform future care.

Had someone asked Foord these questions, she said she could have told them Alfie’s movements had changed, from a karate kicker and dancer to a placid, docile child who, after one last frenzied evening, was forever still.

Foord said she liked the term stillbirth because “it is factual, and it is also kind”, recognising that the child was a child, a life, and that for the mother, “it is still birth”.

Watch our interview with Foord

Gordon took her colleagues through the evidence for the various elements of the bundle, drawing on a survey of maternity hospitals to identify gaps between best practice and actual care across the five domains.

Of the five, she said timing of birth for at-risk women – the subject of intense debate across numerous sessions at the ASM – would be the most tricky to navigate.

She presented some of the most important considerations (below). 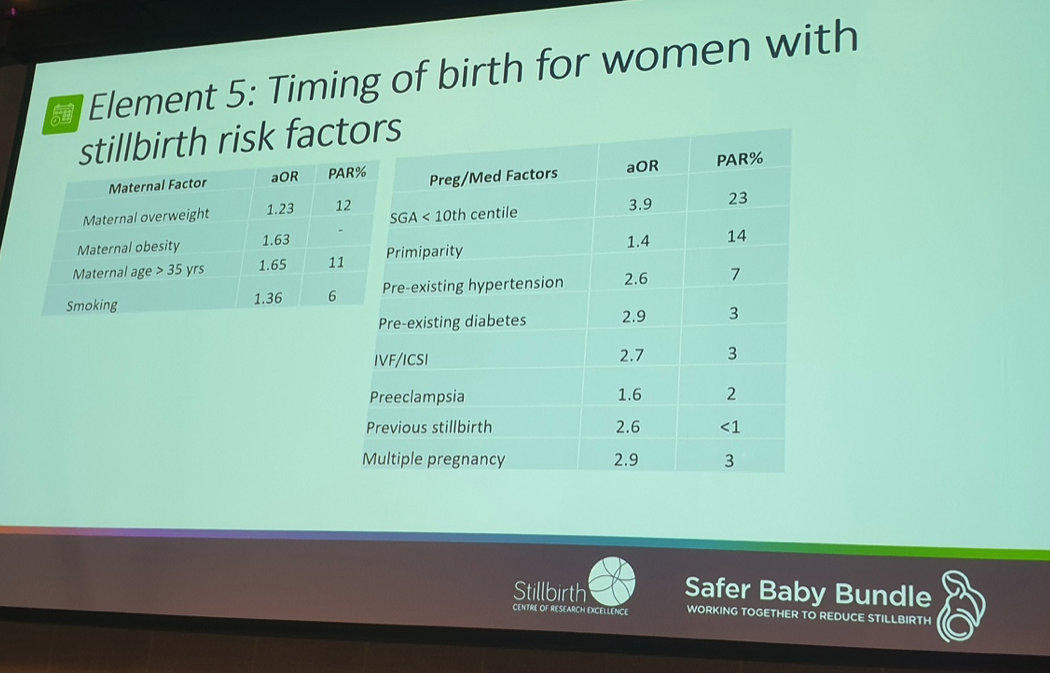 To assist clinicians with decision-making, Gordon said a stillbirth risk calculator using some of this data would be rolled out in Australia over the next 12 months, though Professor Sue Walker, director of perinatal medicine at Melbourne’s Mercy Hospital, questioned whether this would be more meaningfully framed as a ‘safe to stay’ algorithm.

She was suggesting that rather than the algorithm having an emphasis on when to get a baby out, it would be more meaningful (and more acceptable to clinicians and parents) if it was framed as a calculation of safety to keep the baby in utero.

The conference heard many discussions about how clinicians convey, and how patients understand and process risk, striking the balance between undue anxiety and not adequately grasping the gravity of potential consequences.

Several sessions explored the need to strike a balance between intervening in the right circumstances and the risk of iatrogenic harm, including a plenary on foetal growth restriction (see a Twitter thread here), keynote on induction of labour versus expectant management from international expert Bill Grobman (thread here), and a prize-winning paper from medical student Roshan Selavaratnam showing increasing delivery and admission to NICU of babies screened as small who were actually not at risk (in this thread).

One important theme that emerged from these discussions was that, while improvements to screening methods were welcome, any new tools and techniques needed to be generalisable across a range of maternity settings, and not just available in tertiary centres, given that stillbirth rates increase the further a woman lives from a major city.

According to the Australian Institute for Health and Welfare, babies born in remote and very remote Australia are 65 percent more likely to die during the perinatal period compared with major cities or inner regional areas.

Meanwhile, in Melbourne on 15 October, hundreds of people attended a remembrance service for bereaved parents, families and friends affected by pregnancy and infant loss (watch these videos from the event).

The death of a baby or a child is an incredibly difficult topic for many people, which means it is often a silent and unspoken grief for many parents.

It is a profound loss, a devastating loss, an individual loss but a loss that is also felt by siblings, by grandparents other extended family and close friends.

Recognition of the loss of a baby or child by work colleagues, by friends and our wider community is a crucial step in acknowledging bereavement and starting conversations to reduce stigma and to help people get the support that they may need.

It is important that parents that have lost their babies are recognised as parents too, whether they have surviving children or not. I understand the significance this acknowledgment has, and as a community we must support all parents with these difficult conversations.

They’re about coming together to honour and to acknowledge those babies whose lives have been lost through miscarriage, stillbirth or newborn death… Your loved ones will never be forgotten, and tonight we treasure them, we cherish them, and we remember them.”

Claire Foord had earlier described the annual day of remembrance as a chance for health care workers to join with their patients in commemorating babies lost.

• Read more about the Safer Baby Bundle session in this Twitter compilation. 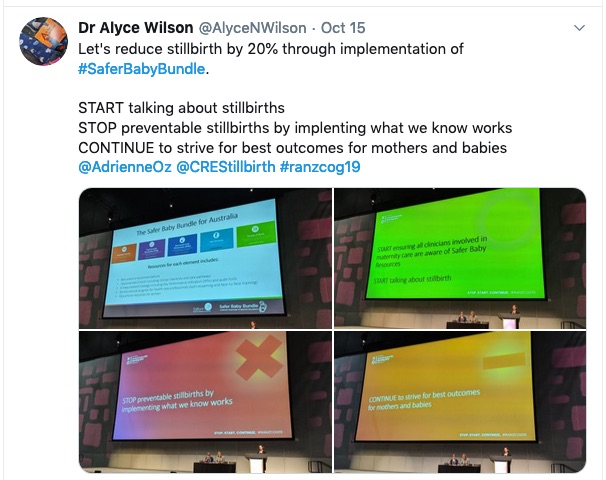