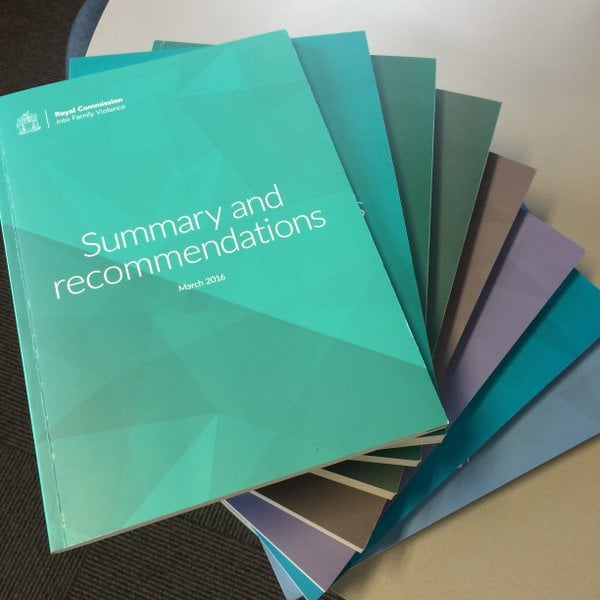 A  sweeping seven-volume report into family violence in Victoria was hailed as a turning point for a “broken system” Wednesday, with state Premier Daniel Andrews agreeing to adopt all 227 recommendations and warning “there can be no more excuses — our work begins today.”

The Royal Commission into Family Violence delivered its 1,900 page report to the Victorian government this week, urging an overhaul across all facets of the sector following 13 months of hearings and testimony of 220 victims.

The findings were made public in a budget-style lockup for media and stakeholder groups early Wednesday, with Premier Andrews vowing to put victims at the heart of ambitious reforms recommended by the Commission.

“I refuse to look back in ten years’ time and admit that we could have done more to save innocent lives. We will get this right,” said Andrews.

“We will punish the perpetrators, listen to the survivors and change the culture that allows family violence to happen.”

“Too many women are dying. The #RCFV was our highest and most formal way to get the answers that we need” – Andrews. pic.twitter.com/ef4WgBirIA

It’s time to change it all. #RCFVhttps://t.co/Y5ygYMkPTD

Denouncing it as “gendered crime” rooted in “appalling” attitudes to women and failures of political leadership, Andrews said there needed to be a focus beyond the life of any one government and did not shy away from the fact that reforms would be costly:

“This is not about money, this is about saving lives,” said Andrews, estimating that family violence cost the state at least $3.1 billion every year.

Among the report’s key recommendations, which will be adopted wholesale by the government: 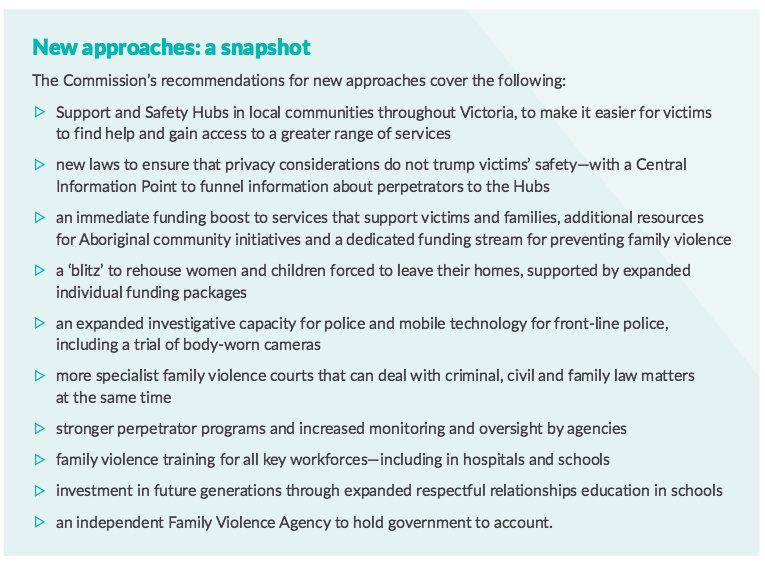 The report calls for less siloed responses and shifting of the burden away from victims onto perpetrators, as well as greater accountability across the board.

Other measures considered relate to financial and accommodation security for victims, with calls for the federal government to amend the national credit code to include family violence as grounds for financial hardship.

The Commission itself spent just $13.5 million of its $36 million budget, and requested that the balance go to funding family violence services.

Cmr Marcia Neave: family violence affects everyone. In this room there will be survivors #RCFV pic.twitter.com/ar7nRxKcZY

“The overall response to family violence needs to be transformed,” Neave says.

Andrews said he would discuss the findings with Prime Minister Malcolm Turnbull ahead of COAG on Friday, noting that the report was important for Australia as a nation, not just Victoria.

Former Australian of the Year and outspoken family violence campaigner, Rosie Batty, appeared alongside Andrews and Commissioner Marcia Neave as the findings were handed down.

The death of Batty’s 11-year-old son Luke at the hands of his father in February 2014 was one of the events which eventually set the Commission in train.

“It will take weeks” to digest the seven volume report, Rosie Batty says. “But I’m thrilled” she says. #RCFV pic.twitter.com/dBGOsRnjJX

The report’s ambitious new agenda was lauded by groups in the community sector, with the Victorian Council of Social Service hailing it as “a landmark moment and a turning point in addressing the scourge of family violence in Victoria”.

The breadth of the report is extraordinary, encompassing all areas of government and social service delivery.

VCOSS welcomes the focus on critical areas that are often overlooked, such as financial security. For example, the recommendations look at ways to stop women having their electricity cut off or losing their tenancy as a result of family violence.

Challenges will inevitably arise with such seismic change to the way the Victorian community, the service system and government work together to tackle the scourge of family violence. But it is incumbent on us all to make the most of what is a once-in-a-generation opportunity to achieve real change.

The Aboriginal Family Violence Prevention and Legal Service Victoria welcomed the report as a “watershed moment”.

“The most effective way to keep women and children safe is to change broader societal attitudes and structures that excuse or minimise violence against women. This must begin at a young age, so we are pleased that the report recommends mandatory education about respectful relationships for school students,” said CEO Julie Edwards.

Domestic Violence Victoria said the report was a chance to make an “extraordinary difference to the lives of women and children living with violence.”

Let's be clear, the release of the #RCFV report today is the beginning of a discussion about family violence, not the conclusion. #VAW

We commend @VicGovAu for their commitment to ending family violence with their final #RCFV report. https://t.co/rDhhZNJB1P via @ABCNews

We are reviewing the #RCFV report and look forward to working with partners and government to action recommendations pic.twitter.com/Scsliig618