Some of the tweets that caught my eye last week….

Grabs from the Population Health Congress 2012 in Adelaide

(And thanks to all those tweeting from the conference).

A terrific use of imagery to describe the focus on individual behaviours instead of the broader determinants of health. This tweet was reporting on a keynote address on Indigenous health – modern myths and legends, by Professor Papaarangi Reid, Head of Department of Maori Health, Faculty of Medical and Health Sciences, University of Auckland.

The Lancet’s editor Richard Horton, reporting on a keynote address, How are translational research and knowledge transfer shaping the future of population health? by Professor Adrian Bauman, Public Health and Epidemiology, The University of Sydney and Director, Centre for Physical Activity and Health.

The disproportionate influence of the AMA was highlighted by Professor Fran Baum, of the Southgate Institute for Health, Society and Equity, Flinders University (although Croakey wonders if social media is undermining the AMA’s power – certainly it is enabling many more voices into the health policy debate).

How areas of need become “areas of greed” 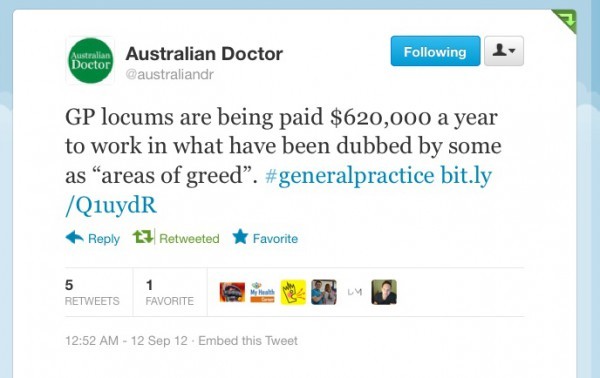 And just to remind us of the many inequities and anomalies within the health system, this tweet is from an Australian Doctor story.

The story says rural practices and hospitals are being crippled by the cost of locum cover, with some doctors on short-term contracts being paid $620,000 a year to work in what have been dubbed by some as “areas of greed”. Permanent rural GPs say the $2000 a day pay rates for locum doctors are creating incentives for doctors to refuse “low-paid” permanent positions as well as making it impossible for some private practices to afford locum cover.

I suspect, however, that such payments are small beer compared with what some specialists take from the public purse.

Surely it is time for another go at a Relative Value Study style operation – but with a much broader remit.

Leave a Reply to Duggy the DC3 Cancel Reply