Home Global health and climate change global health Uncoupling the ‘deadly duo’: from policy to practice in the response to TB-HIV 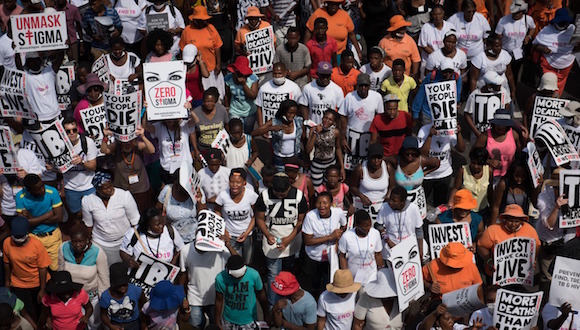 Uncoupling the ‘deadly duo’: from policy to practice in the response to TB-HIV

According to the World Health Organization, people living with HIV are up to thirty times more likely than those in the general population to contract tuberculosis (TB). Despite the knowledge that the two diseases often go hand-in-hand a new global report shows that, for various reasons, patients who are undergoing treatment for HIV often miss out on diagnosis of, and effective treatment for, TB.

In the post Below, Dr Michelle Imison, from the advocacy group, RESULTS International (Australia), outlines why Australians should be concerned about this “deadly duo” that is causing needless suffering and death on our doorstep, and what we can do about it.

With its discussions focused by the theme Access Equity Rights Now the nearly 20 000 delegates were able to connect to the latest scientific developments on HIV/AIDS and push forward relevant political agendas. This is only the third time the conference has been hosted in a country with a high burden of HIV (the second time in South Africa); alongside developments like the ‘end of AIDS’, declared recently in Australia, it’s an exciting time in the field.

But in the midst of such energy and optimism, tuberculosis (TB) could derail all this progress. One of the oldest known illnesses, TB is now once again the world’s greatest infectious-disease killer. It’s also the greatest global killer of people living with HIV: one in three deaths among people with HIV is due to TB.

The two epidemics fuel each other – undiagnosed TB accelerates the progression of HIV, and untreated HIV can increase the risk of developing active TB – so they need to be diagnosed and treated together if we’re to continue our advances in the control of HIV.

In recognition of the crucial TB-HIV interaction, the global health advocacy organisation ACTION has just released a report on national efforts to integrate responses to TB and HIV.

While the report, From Policy to Practice, shows that individual countries are moving in the right direction, not all of their policy changes have translated into improvements for patients. National TB and HIV programmes remain separate, meaning less efficient procurement of TB drugs, a lack of information to health facilities and unco-ordinated scheduling of services for TB and HIV patients.

In addition, most of the burden of supporting key TB-HIV activities still falls heavily on TB programmes, which are under-resourced. While countries with a high burden of both TB and HIV – of a WHO-defined list of 30, seven are in our region (p. 10) – are increasingly covering the costs of testing and treatment themselves, donor funding is largely aimed at the HIV response and caps contributions towards TB.

The planning and co-ordination of TB and HIV responses needs to be more equitably shared between these sectors of health.

Further, the lack of appropriate drugs, diagnostic tools and vaccines for TB – especially when compared to those now available for HIV – undermines the joint response. A combination of years of neglect, lack of resources and absence of political will mean there is no simple, short course of treatment for TB (the usual regimen is six months long), no rapid diagnostic test for use in health facilities and no effective vaccine against the most common form of the disease.

Potential new drugs and combination therapies are on the way, but people with TB and the health workers who care for them continue to suffer these outdated tools.

Finally, an effective TB-HIV response will require greater investment in human resources. The community health workers so critical to these programmes must to be recruited, trained and retained, adequately funded by country governments and donors together.

While nurses provide the bulk of TB and HIV care it is only recently that some countries have begun to allow task-shifting so that nurses can also initiate treatment.

The situation in Indonesia – which, together with China and India, has 40% of the world’s TB burden (p. 13) – is a case in point. The country’s Ministry of Health has recently renewed its joint focus on TB-HIV, with efforts to improve co-ordination, service delivery and reporting.

Through active case-finding, Indonesia’s national TB programme calculated that it had failed to reach 680 000 people with the disease. Although 6 percent of new TB cases in Indonesia are among people living with HIV, these individuals might otherwise have died from a treatable illness due to the lack of TB-HIV integration across public and private health care. Making services available in the same facility would mean being able to test people for TB when they come in to receive HIV antiretroviral treatments.

What does the scale of the TB-HIV burden in our region mean for Australia and how might we respond? First, Australia is the largest contributor of aid to Papua New Guinea, which has among the highest incidences of TB in the world (30 000 people in a population of 7.5 million are newly infected each year) and a specific problem with drug-resistant strains of the disease.

Among PNG’s TB patients, 11% are HIV-positive. Australia could partner with PNG to ensure its TB response is fit for purpose, with assistance in the scale-up of diagnosis and treatment for HIV-associated TB and in skills training for health workers. Second, Australia should be advocating for, and contributing to, greater investment in better tools to prevent, diagnose and treat TB (including TB among people living with HIV) in PNG.

Civil-society advocates, policy-makers and academics who work directly on TB are well aware of its deadly connection with HIV, but this link needs to be better appreciated by the governments of high-burden countries, donors and those working on HIV-related issues everywhere. It is unconscionable that people might increasingly live with HIV, but die of TB: there will be no ‘end to AIDS’ globally without an end to TB.

*Dr Michelle Imison is the Global Health Campaign Manager for RESULTS International (Australia). RESULTS is a member of the global health advocacy network ACTION, which released ‘From Policy to Practice: How the TB-HIV Response is Working’ on Tuesday 19 July at the AIDS 2016 conference in Durban.