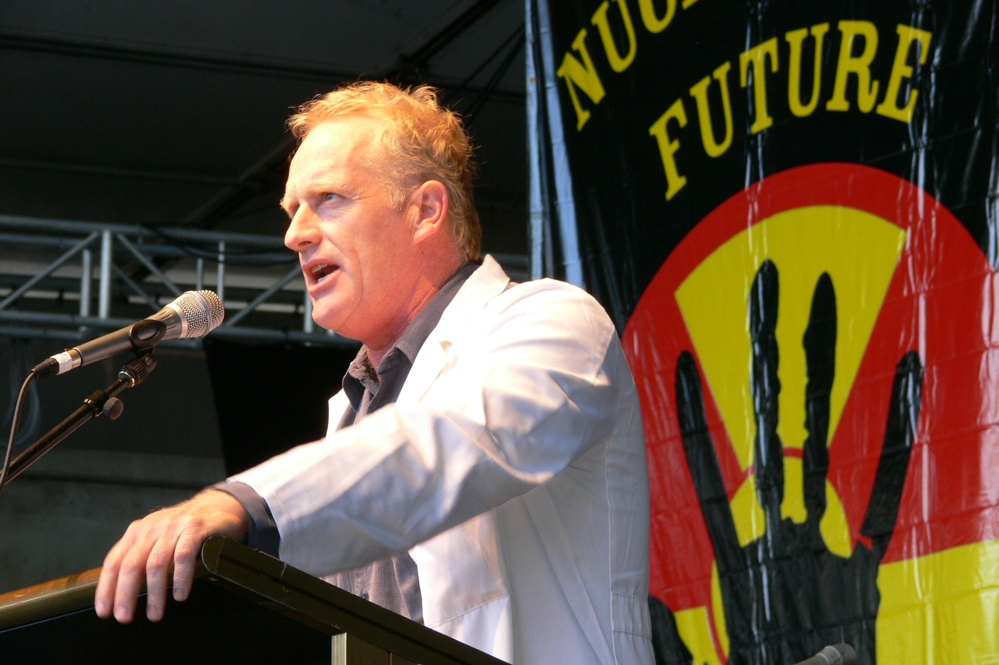 So many people have been shocked and saddened to learn of the death last month of Dr Bill Williams, who was for so long a leading figure in the Medical Association for Prevention of War (MAPW) and the International Physicians for the Prevention of Nuclear War, a co-founder of the International Campaign to Abolish Nuclear Weapons (ICAN) in Australia, and worked passionately for Indigenous and public health.

In the post below, his long-time colleague and friend Tilman Ruff, Associate Professor at the Nossal Institute for Global Health at the University of Melbourne, pays tribute to an extraordinary life.

MAPW and ICAN Australia have also honoured Bill Williams’ life in this tribute here, as have James Massola and Dave Sweeney in this obituary in The Age.

In tribute to Dr Bill Williams

It is a time of deep sorrow for the many who knew and loved the remarkable Dr Bill Williams. Brimming with life and love, surfing most days, fit and muscular, ten days from turning 58, his second grandchild due any day, Bill went to bed normally on Sunday 11 September, and did not wake up. He had no known treatable cardiac risk factors; but his father, too, had died in his sleep of a presumed heart attack, aged 52. Bill is survived by his wife Gisela Gardener, daughters Daisy and Lily, and grandsons Remy and Archie Bill – who entered the world five days after Bill departed it, his mother Judith and brothers Timothy, Mark, Nicholas and Tony and their families. What a life to celebrate!

The small cemetery on the hillside at Mt Duneed behind Torquay on Bill’s beloved Victorian surfcoast has a wide vista towards the ocean. Those gathered there to bury him included 18 of Bill’s Pintupi family from Kintore on the edge of the Western Desert in the Northern Territory; under big old eucalypts beside European trees, next to a primary school where the lively sound of children playing would carry over his grave. During the burial, enormous flocks of ibis gathered, circling slowly at different heights overhead, then dispersed silently after the soil fell on Bill’s coffin.

The middle son of five boys, Bill’s father Hugh was a GP in Geelong; his grandfather was also a GP, in Melbourne.

In 1979 Bill took a year away from medical study and travelled in South America, working in primary health care, where he described “In Nicaragua I lay awake at night listening to gunfire as the revolutionaries tidied up the retreating National Guard, then helped to run mother and baby clinics among the Muskito peoples of the Caribbean coast.”

Later he went to Zimbabwe, delivering babies in war-torn hospitals and witnessing the terrible burden of preventable deaths of children.

Bill had a global and wide historical perspective. He nourished a great capacity for empathy, respect and understanding of traditional ways across diverse cultures. Early and strongly he developed a deep understanding and passion for the advocacy and public health engagement needed to make major gains in promoting health and removing the big causes of ill-health and premature death.

After training in Melbourne and London, Bill spent much of the 1990s working in Central Australia, especially at the Pintupi Homelands Health Service, where he continued to help out periodically even this year, forging deep and abiding bonds of understanding and friendship.

For over a decade Bill also immersed himself in feminist perspectives, working to understand issues faced by women and the implications not just for his medical practice but also society at large. He took these teachings to heart in both his professional and personal life. Working as a police surgeon/forensic medical officer in Geelong in the 90s, he introduced lasting reforms, such as ensuring that women who suffered domestic or sexual violence were first assessed by a female doctor.

At Corio Community Health Centre and later Surfcoast Medical Centre in Torquay, Bill was treasured by colleagues for his insight, humour and wise counsel, and cherished by patients for his exemplary care and abiding capacity to listen.

Bill helped found and build the International Campaign to Abolish Nuclear Weapons (ICAN), and served magnificently as chair of ICAN Australia. This campaign, which started in Melbourne, now has 440 partner organisations in 98 countries, and is the leading dedicated civil society campaign worldwide working for a treaty to ban nuclear weapons. For over 30 years, Bill was a stalwart of the Medical Association for Prevention of War, the Australian affiliate of the Nobel Peace Prize-winning International Physicians for the Prevention of Nuclear War (IPPNW). He served as MAPW president and international councillor.

Bill published three books: Men: sex, power and survival (written with his wife Gisela Gardener, 1989), Kumanjayi’s Country (1999), and Bleed (2015), about Gisela’s life-threatening brain hemorrhage in 2011 and their remarkable shared journey of medicine, resilience and love through her recovery.

Bill’s passion for health and life, clarity and eloquence, wisdom and integrity; his energy and commitment have been a shining inspiration and won him enormous admiration and gratitude around the world. He was the real, straight-talking deal. No games, no pretense, no PR; but warmth, compassion and leadership; perceptive, grounded and balanced. He recognised when he needed to take time to restore his connection with Tjukurrpa (the force that unites people and the land), and connect with it he did. He was the best communicator in the land for MAPW and ICAN. He has spoken medical truth to power around the country, and especially met and talked with Indigenous communities around Australia and recently in Greenland, facing the onslaught of nuclear test legacy, mining of uranium, and proposed imposition of radioactive waste.

Bill was equally at home in a clinic, a UN meeting in Geneva, parliamentary offices, before a medical student Global Health Conference, on a wave on the Surfcoast or in an Indonesia barrel, partaking in a traditional ceremony in the red dust of the Western Desert with Pintupi Ngangkaris, walking in a German or Tasmanian forest, treating ailing Paddys in Ireland, chairing an ICAN board meeting, enthusiastically guiding one through an epic sweep of Roman or German history, reciting Latin poetry out loud, despatching a self-reared goose and preparing it for the pot, or harvesting home produce.

I had the privilege of working closely with Bill for much of the last 30 years; as sounding board, go-to person, confidant and partner in work to eradicate the greatest threat to planetary health, nuclear weapons, he was a pure treasure. His firm rootedness in the things that really matter – family, love, country, the ocean, green and growing things, art/music, shared joys – nurtured and balanced his advocacy work. He was as well balanced as anyone I know.

Together we could convince the IPPNW International Council meeting in Helsinki in 2006 to unanimously support ICAN as the central priority and vehicle for the federation’s core work for nuclear weapons eradication. The same year, Bill came with my children and other dear friends on what is for me the most wondrous of pilgrimages, rafting down the Franklin River. We shared hotel rooms and late night strategies during IPPNW congresses in Washington, Helsinki, Delhi and Basel.

At a special UN Working Group in Geneva in May, Bill was able to witness the growing support among governments the world over for banning nuclear weapons. A historic proposal for negotiations to start next year on a treaty to prohibit nuclear weapons is now before the UN General Assembly, and will be voted on at the end of this month. Bill played no small part in getting it there.

Our most fitting tribute to Bill will be to re-double our efforts to ban and eradicate the scourge of nuclear weapons from the face of this good Earth.

Associate Professor Tilman Ruff is a public health and infectious diseases physician. In addition to his work at the Nossal, he serves as medical advisor to the international program of Australian Red Cross and is a member of the Hepatitis B Expert Resource Panel for the World Health Organisation Western Pacific Region.

He has been active in the Medical Association for Prevention of War (Australia) for 35 years and is a co-president of International Physicians for the Prevention of Nuclear War (IPPNW), winner of the 1985 Nobel Peace Prize.

With Bill Williams, he helped to establish the International Campaign to Abolish Nuclear Weapons (ICAN), was its founding chair, and is currently a representative on its International Steering Group and chair of the ICAN Australia Committee.

In June 2012, Tilman was appointed a Member of the Order of Australia “for service to the promotion of peace as an advocate for the abolition of nuclear weapons, and to public health through the promotion of immunisation programs in the South-East Asia – Pacific region”.