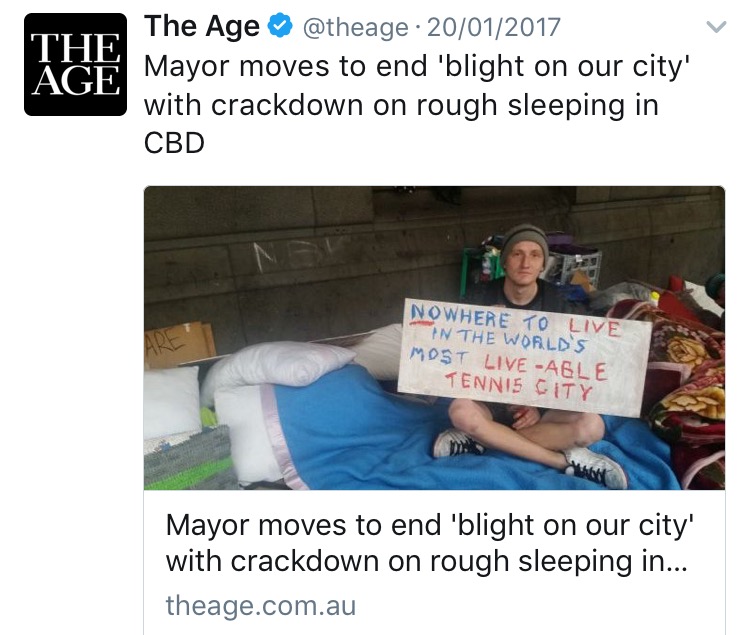 Vilifying the vulnerable and marginalised will not solve social problems

The outpouring of empathy for victims of the recent shocking episode of public violence in Melbourne’s Bourke Street Mall stands in marked contrast to the growing pattern of stigmatising rhetoric and punitive policies towards those most at risk of violence in the city.

In the post below, Donna Ribton-Turner (acting CEO of Melbourne-based Drug and Alcohol support organisation, UnitingCare ReGen) considers what effect the broad pattern of public figures blaming individuals for structural and social problems is having on public attitudes (and public policy), and what needs to change if we are to achieve sustainable improvements in homelessness, alcohol and other drug use, and other contributors to disadvantage within our communities.

The public outpouring of grief at the recent deaths in Melbourne’s CBD is entirely understandable.  People who were simply going about their daily lives became the victims of a shocking act of public violence.

For anyone in Melbourne who spends time in the CBD, the reaction is the same: ‘It could have been me’.  Such a response is a natural result of the empathy we feel as humans for others we can identify with: people like us.

This immediate empathy sits in stark contrast to public perceptions of another group of people who live with the constant risk of public violence within our city: people who are homeless and living on our streets.

For those not familiar with Melbourne’s CBD, the well documented ‘circle work’ that immediately preceded the carnage in Bourke St occurred about 50m from a small community of homeless people that has established itself on the footpath outside Flinders St Station.

There has been a growing pattern of official and public vilification of this group, who represent some of the most vulnerable people within our community.  Indeed, in the days leading up to the Bourke Street tragedy they were described as a ‘blight on our city’ by our Lord Mayor and ‘disgusting’ by our Police Commissioner.

The recent surge in stigmatising rhetoric about homeless people in Melbourne is contributing to a hardening of public attitudes towards those most in need of our support.  It forms part of a broader pattern of victim-blaming that appears to be driving much of our public policy, from the Commonwealth, down to Local Government.

This pattern relies on a refusal to recognise the role that structural and social factors play in driving disadvantage within our communities.  Instead of addressing the causes of the problems, our leaders seek to demonise (and increasingly criminalise) those experiencing their effects.

In our society, we only allow public officials to behave like this to people we do not care (enough) about, those with whom we do not empathise, those who are not ‘like us’.

The power of stigmatisation is such that it undermines our basic connections to others.  It allows us to see some people as different and less ‘deserving’ of our concern, a threat to public safety or simply pretending to try to take advantage of whatever empathy we have left.

As a society, we need to challenge the stigmatisation of those who are most in need of our support.  We need to recognise that issues like homelessness (in its many forms), alcohol and other drug dependence, mental health concerns, unemployment and trauma are often interrelated.

And we need a comprehensive response to addressing the social determinants of health if we are to make any sustainable improvements for individuals, families and the wider community.

Stable housing is a basic human need, and one of the most powerful enablers of positive changes in other areas of people’s lives.  Our leaders need to stop responding to structural problems with simplistic, short term (and ultimately counterproductive) solutions.

Stigma only entrenches disadvantage and makes it harder for people to seek help.  If we are to make any progress as a society, we need to stop vilifying the vulnerable and provide effective, evidence based responses informed by local and international experience.  We need more accessible social housing, with integrated supports to address people’s immediate needs and help provide the sort of stability needed for them to rebuild their lives.

We also need more (and more effective) treatment services, to address risk factors for violent offending (such as dependent methamphetamine use) help change behaviour and reduce the future risk of incidents such as those that occurred in Bourke St.

Increased government and philanthropic investment in housing stock and community service is required, as is improved co-ordination between what can be fragmented and confusing service systems.

The solutions to these complex problems are not simple.  They take time (and sustained commitment) to develop.  But they are there, if we choose them.  We can do better as a society.

Treating the vulnerable and marginalised within our communities with respect is a good place to start.