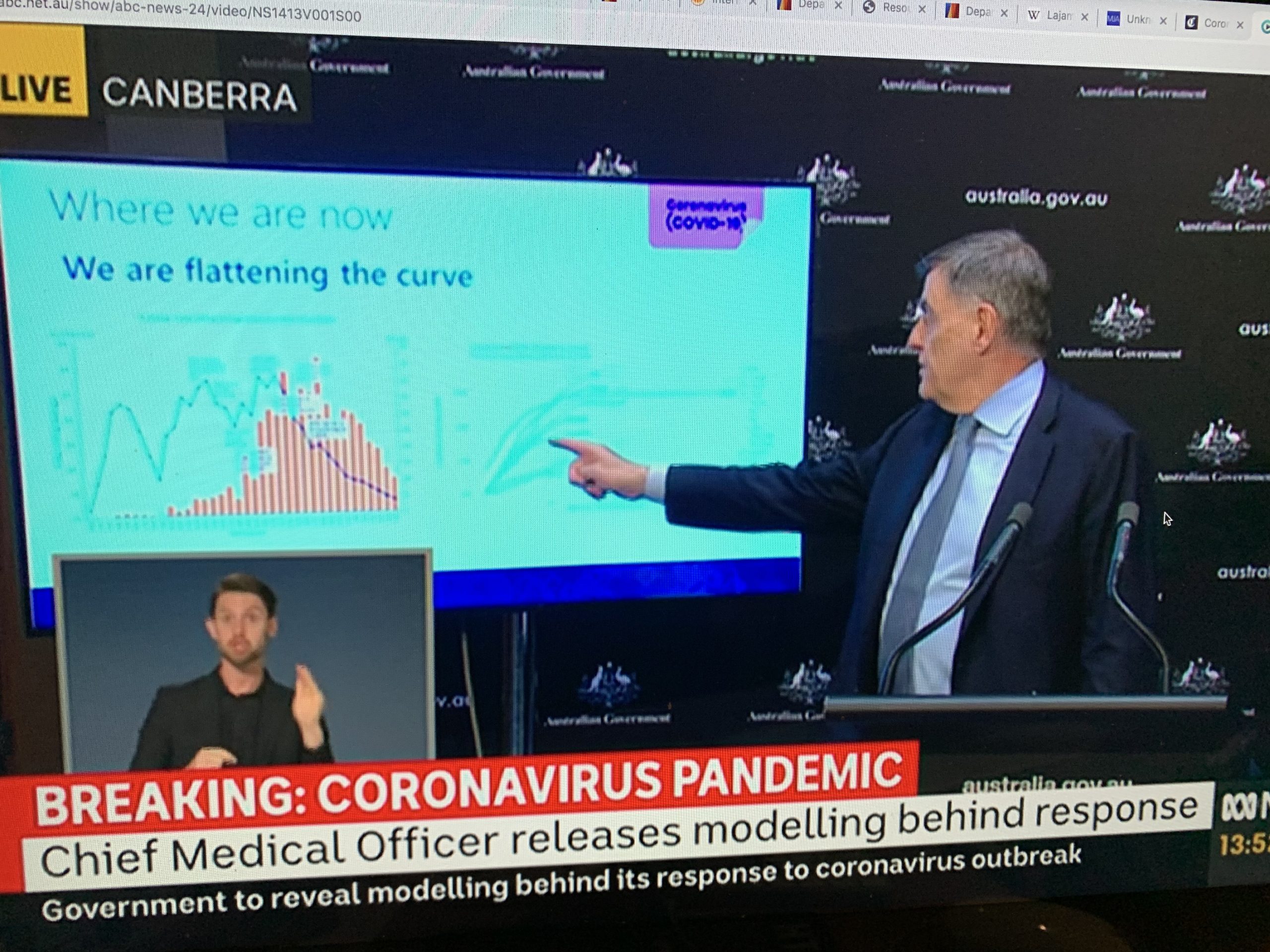 Yesterday, Australians finally got to see the modelling on which our current response to the COVID-19 pandemic is partially based – via a press conference with the Prime Minister and the Chief Medical Officer, a Federal Government summary, and publication of two pre-print research papers on the website of the Doherty Institute.

“You will have what we have,” Prime Minister Scott Morrison told the well-spaced media who attended the press conference. But he cautioned that the modelling was built using Chinese and other international data and was not a realistic depiction of Australian cases, deaths or the projected length of the outbreak.

On a day in which we were very cautiously celebrating continued decreases in the number of new daily cases, he was at pains to point out that Australia’s existing mitigation strategies meant we had already avoided “thousands and tens of thousands of cases that could have occurred, let alone deaths”.

Modelling and the Australian response

Chief Medical Officer, Dr Brendan Murphy, presented the Government’s distillation of the modelling using a power point presentation that was a little difficult to follow in real-time from home (see below), but is now available here. 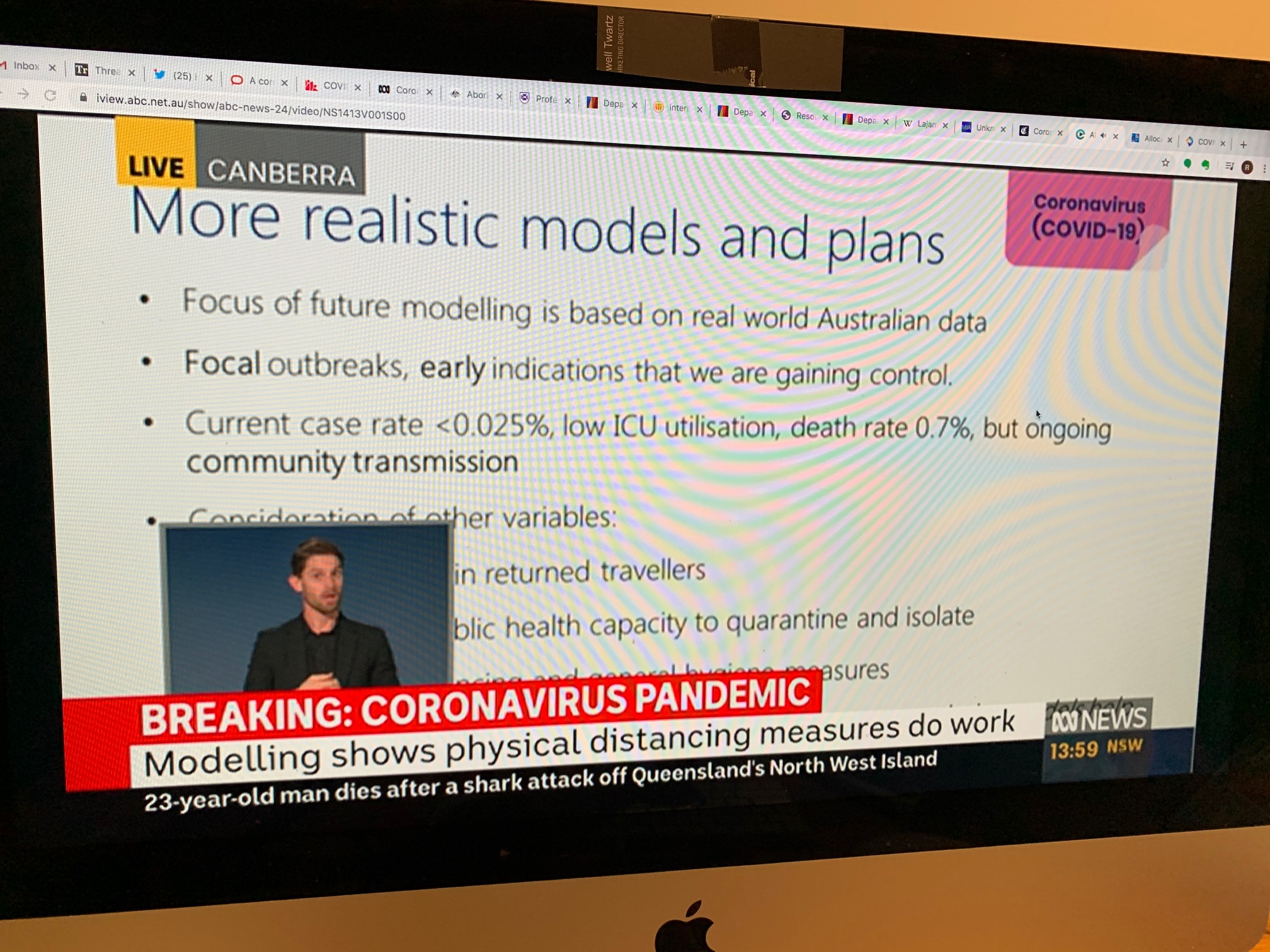 As is depicted in the much-shared figure below, Murphy said the modelling indicated that an uncontrolled COVID-19 pandemic scenario would overwhelm our health system for many weeks. Only 15 percent of people requiring ICU beds would be able to access one, even with expanded ICU capacity.

Isolating cases and quarantining contacts would reduce demand for medical care but, for several weeks of the outbreak, only an estimated 30 percent of people requiring ICU beds would be able to access them.

According to the report, the modelling finds our ICUs will cope if we continue to: 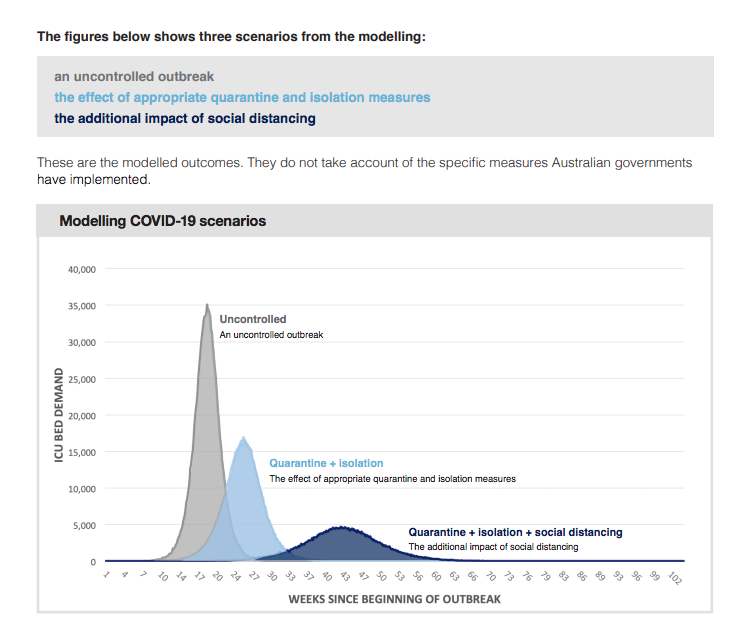 “Liberating the modelling” has been widely considered as an important step to allow expert scrutiny of the data and assumptions that underpin our current strategies to control COVID-19’s spread in Australia and, just as importantly, to inform public debate about what we should do next.

That means citizen participation in deliberations, through mechanisms ranging from talkback radio to citizen juries.

We need to also hear from a wide range of experts to help us deliberate. Philosophers, ethicists, economists, public health experts and epidemiologists – to name just a few.

At the end of this deliberation process, it will necessarily return to the politicians to ‘make the call’. But they need some sense of societal consent.”

The modelling looks like an elegant piece of work (I’ll leave it to actual experts to provide any critique but will give an overview below) and is similar to other scenarios that have been bandied around (for example, ‘ICU availability is quickly exhausted if we do nothing and will cope if we test, and trace and isolate cases, and continue social distancing’). However, both Morrison and Murphy caution that it is no guide to what lies ahead.

When asked what rate of COVID-19 infection we could tolerate without pushing ICU capacity, Murphy said he did not know, because this could only be revealed by modelling using data from Australia’s outbreak, which would be done in coming weeks. He said:

Certainly we’re very confident with the growth trajectory at the moment but that can change, particularly with community transmission.

I can’t give you an answer on that today but we will in coming weeks. National Cabinet has asked for a range of options.

Some people have used the analogy of a life raft. We’ve got ourselves on a life raft…

We have to chart the course of where we take that life raft.”

As Michelle Grattan wrote yesterday in The Conversation, Scott Morrison has made it clear he does not think eradication of COVID-19 in Australia will be economically viable. In her regular media updates, NSW Premier Gladys Berejiklian has been similarly frank.

As more Australian data become available to aid our contemplation of the various scenarios, the modelling around how economic issues and the health aspects of COVID-19 might be balanced is something that most Australians would benefit from understanding.

There are also many other factors that need to be considered in any predictions, such as the distribution of ICU beds, health care staff and other resources around the country, and the preferences and values of groups whose voices are often not prioritised – such as people living in rural areas, Indigenous Australians, people with chronic illnesses or disabilities, and older people.

It will not be a simple equation.

McVernon said that, from the early days of the outbreak in Wuhan, it was clear that COVID-19 was well beyond her team’s experience of influenza pandemics in terms of the speed and severity of the outbreak. They knew if the virus reached Australia there would be severe consequences:

It (the scenario) was hard to comprehend but our government believed us.”

She said, although there was a focus on intensive case beds, their “highly theoretical” modelling looked at the impact of different scenarios on the whole health care system, acknowledging that many things, such as the proportion of people who will need admission to hospital, remain highly uncertain.

McCaw took up the Chief Medical Officer’s question of, “Where to now?”.

We can think about the challenges ahead, but from a position of relative calm.”

He said that the next few weeks were crucial and that, while the recent increase in COVID-19 case numbers would lead to an inevitable increase in hospitalisations, ICU admissions and deaths as these existing illnesses progress, this did not signal a loss of control.

And he said his group had moved on to an analysis of Australian data:

We’re now in a transition from scenario analyses to data-science driven situational awareness in Australia.”

There’s a lot more to it than my summary below, including modelling to predict what would happen at general practice, emergency department and hospital ward level, so do have a look…

The researchers adapted a “clinical care pathways model” for the Australian health system that had previously been used for influenza pandemic preparedness, applying plausible COVID-19 scenarios.

The model was designed to take into account the age and risk profiles of the Australian population, and classified people as being susceptible, exposed, infected or recovered (SEIR), assuming an R0  (estimated number of people each case would infect) of 2.53, a doubling time of 6.4 days, an incubation period of 5.2 days (including two days where the person would be infectious but asymptomatic) and a total infectious period of 9.68 days.

These estimates came from Wuhan data, and previous studies.

Assuming at baseline that 50 percent of all ICU beds would be available for COVID-19 cases, the researchers also modelled different levels of ICU bed availability expansion, and considered other health sector expansion, such as clinics to alleviate bed block in emergency departments.

The modelling showed that an unmitigated epidemic would rapidly overwhelm health sector capacity and that isolation and contact quarantine alone would not sufficiently constrain this. 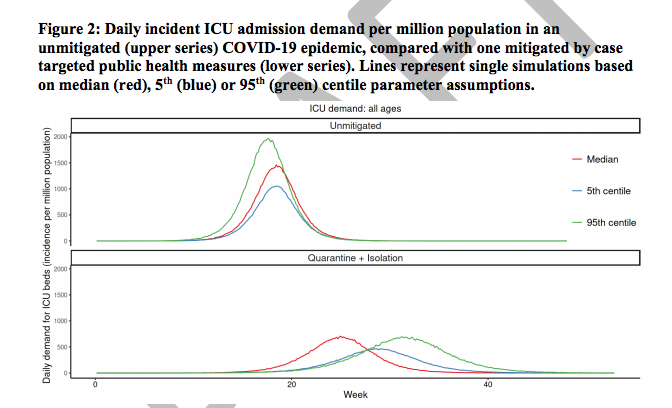 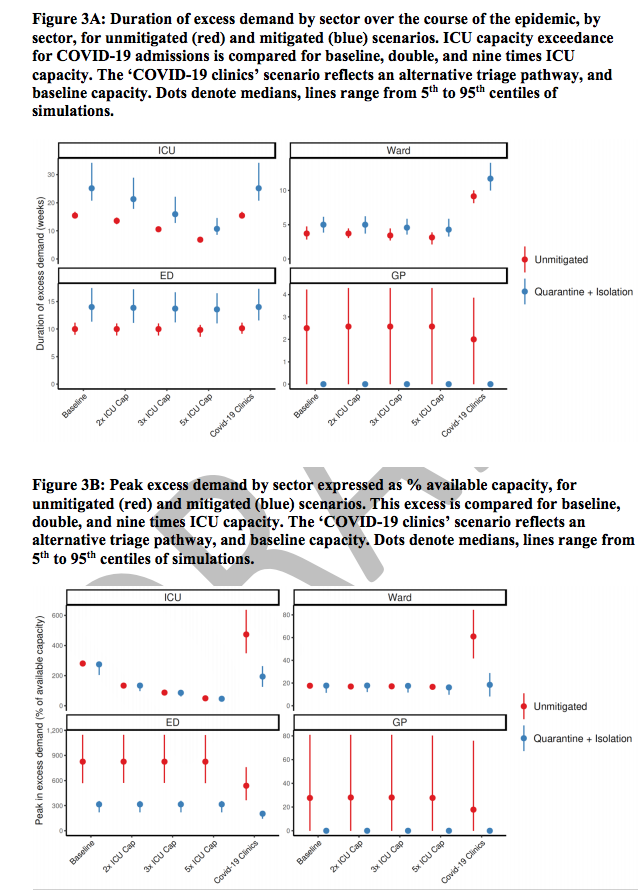 Using the higher level of social distancing, along with isolation and quarantine, treatment of all cases was possible if a three to five-fold increased ICU bed capacity was factored in. 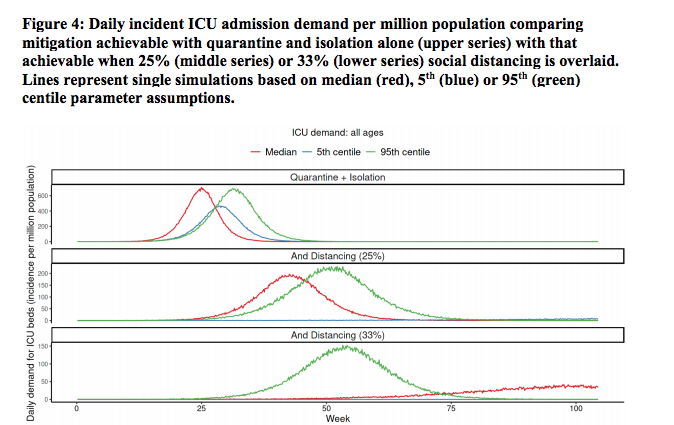 The authors pointed out a number of issues they were unable to consider in the modelling, including healthcare worker losses due to illness, carer responsibilities or burnout, shortage of supplies including PPE and social disruption.

Reducing COVID-19 morbidity and mortality will rely on a combination of measures to strengthen and extend public health and clinical capacity, along with reduction of overall infection transmission in the community.

Ongoing attention to maintaining and strengthening the capacity of health care systems and workers to manage cases is needed.”

For more information on modelling and this particular model, there are some great threads on Twitter, including here and here from Professor Allen Cheng, who was a co-author on this paper, and here, from Croakey’s Amy Coopes.

The National Academy of Science has welcomed the modelling, saying in a press release that it is being reviewed by discipline experts within the Academy’s Fellowship and flagging the development of a national COVID-19 Expert Database and the availability of “informative and fact checked” video content at their site.