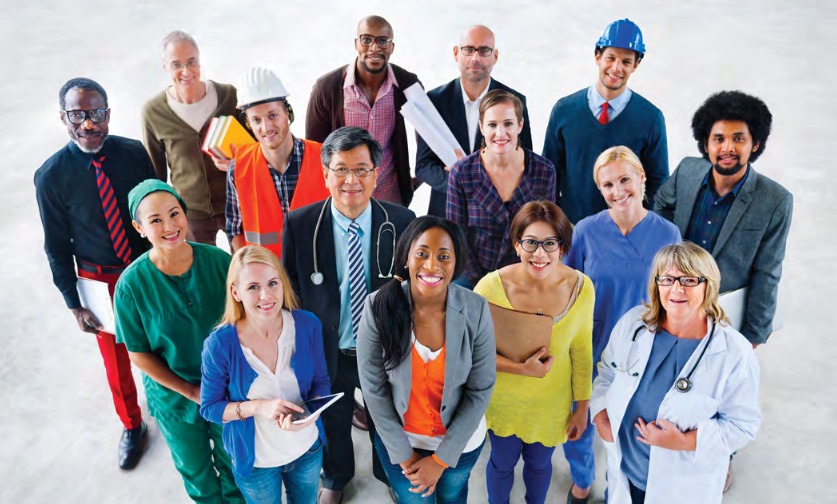 Image from the CDC's Winnable Battles report. Lessons for Australia?

What we must get right in a national preventive health strategy

Members of the broad prevention sector must work together to present a unified plan of action for the new national preventive health strategy, according to Professor Anna Peeters, Director of the Institute for Health Transformation at Deakin University.

Our newly re-elected Federal Health Minister, Greg Hunt, has announced the Government’s intent to implement an Australian Preventive Health Strategy. With around one-third of the disease burden and more than 700,000 hospitalisations per year potentially preventable in Australia, we are crying out for a prevention strategy.

This is an opportunity that we must grasp as a sector.

We led the world in tobacco control and road safety – with policies that have saved countless lives and healthcare dollars.

But we have no plan to deal with predictions that this generation may be the first to have a lower life expectancy than their parents nor the fact that children in many Indigenous communities already will live 10 years less than their non-Indigenous counterparts.

We know that prevention works.

In the past decade we saw the development of the National Preventive Health Taskforce and the Australian Preventive Health Agency (ANPHA), neither of which saw their potential fulfilled, with few of the Taskforce’s recommendations implemented and ANPHA disbanded in 2014.

On obesity prevention alone, we have seen numerous reports, starting from Acting on Australia’s Weight 20 years ago (1997), which many of us now call ‘Waiting for Australia to Act’.

So what could be different this time?

Inaction often comes from the sense that the complexity of the issues is overwhelming, competing vested interests, and from many voices competing about what needs to be done first.

But our understanding of how to approach the complex problems of prevention, such as inequalities in health, obesity and violence against women and children, has advanced.

We have evidence that collective approaches that recognise the broad systems surrounding our health and wellbeing can lead to real improvements. An excellent example is the Close the Gap for Vision initiative, launched in 2008 to tackle the shocking rates of blindness and impaired vision among Aboriginal and Torres Strait Islanders six times that of the non-Indigenous population.

Over 40 partners involved in Indigenous eye health came together, mapped the system and identified apparently simple solutions. Neither complicated science, nor exorbitantly expensive, this has already led to a halving of the Vision Gap, with estimates that the remaining differences will be eradicated by as early as next year.

So, what will we need from this prevention strategy if it is to be successful?

It will need a focus on short and long term outcomes. The American Centers for Disease Control and Prevention’s (CDC)  Winnable Battles approach is worth a look. They identified public health priorities where the CDC and their public health partners could make significant progress in a relatively short time-frame. This approach has led to significant engagement and impact in prevention priority areas like tobacco control and obesity prevention.

And it will need to track these outcomes with trusted and visible data. Using digital tools, staged targets and dashboards, such as Australia’s Health Tracker and Food Policy Index,  help stakeholders stay engaged and on track.

And we, the many and varied stakeholders, will need to support it with one voice.

We all know that many actions will be needed to prevent these wicked problems. These will need to be complementary and involve many stakeholders outside health. So let’s not waste time shooting down specific initiatives, such as the regular sugar tax soundbites, and instead make sure government and the community see the value in implementing multiple preventive initiatives, at scale, over the coming years.

Most of all, it will need significant, long-term investment. Innovative models to leverage further investment, such as co-investment, and social impact bonds should be explored.

Preventing the one third of ill health that is avoidable cannot be done without allocation of substantial funds and human resource. But we will reap a return on investment through the associated decreases in premature mortality, ill health and improvements in independent living and productivity.

A new Australian Preventive Strategy cannot be all things to all people. But it can enhance the health and wellbeing of all Australians.

This is an opportunity for the broad prevention sector to work together, and with our extensive partnerships outside health, to present Greg Hunt with a unified plan of action, with specific short, medium and long term targets.

• Professor Anna Peeters is Director of the Institute for Health Transformation and Professor of Epidemiology and Equity in Public Health at Deakin University. Follow on Twitter: @AnnaPeetersAus. 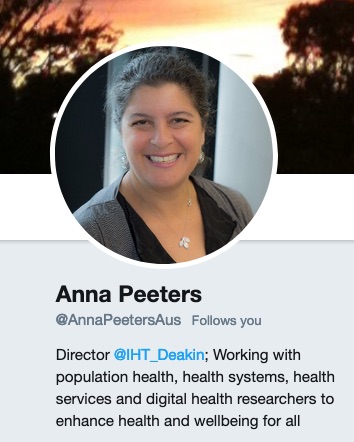 Smash the silos that constrain public health, and stop “ruthless” marketing to kids 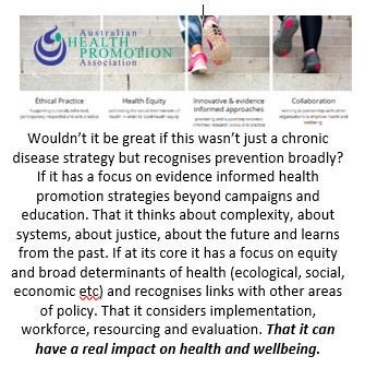