Home CroakeyGO #CroakeyGO #NavigatingHealth When it’s easier to get meds than therapy: how poverty makes it hard to escape mental illness 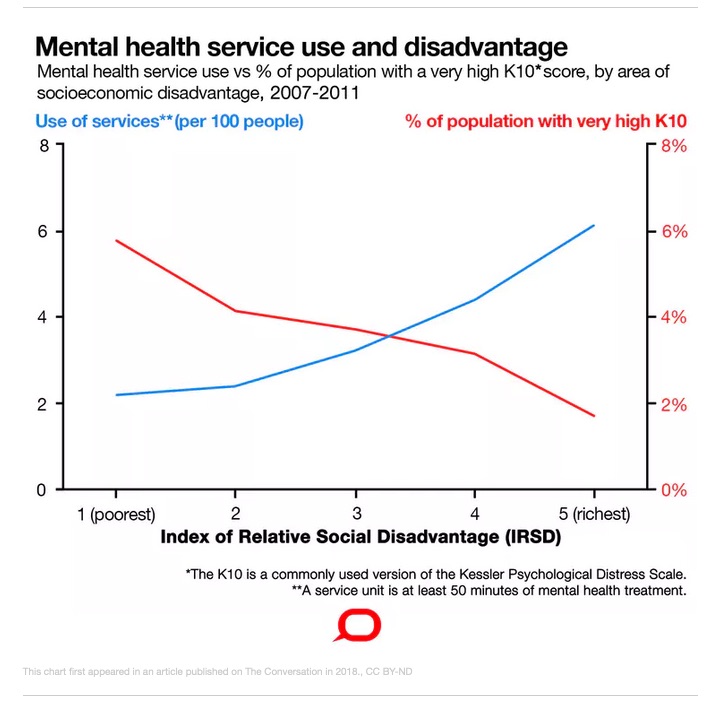 Image via The Conversation

When it’s easier to get meds than therapy: how poverty makes it hard to escape mental illness

Introduction by Croakey: Readers are invited to join a #CroakeyGO in Melbourne on 1 August to share experiences and insights into patient journeys through mental health systems. This walking journalism event is sponsored by the North Western Melbourne Primary Health Network.

No doubt, we will also hear about the wide-ranging factors outside health services that have a bearing upon the community’s mental health and wellbeing.

“Many health, educational, transport, housing, welfare and fiscal policy shifts could improve mental health in communities by addressing socioeconomic disadvantage and its impacts across the lifespan,” write the authors of the article below, first published by The Conversation.

The poorer people are, the higher their chances of contending with domestic violence, crime, social conflict, homelessness and unemployment.

All these factors contribute to increased levels of psychological distress, which is associated with common mental disorders such as depression and anxiety.

In our research, of adults who recorded “very high” levels of psychological distress on what’s called the Kessler Psychological Distress Scale, more than three times as many (30%) came from the most socioeconomically disadvantaged fifth of Australian areas than from the most affluent fifth (9%).

Read more: Three charts on: why rates of mental illness aren’t going down despite higher spending

Along with where you live, personal income is an important influence: among the poorest fifth of Australians, one in four people reported “high” or “very high” psychological distress when compared to about one in 20 people in the richest fifth.

To begin to tackle this problem, we need to see more equitable distribution of mental health care; that is, delivery of care proportionate to need. As it currently stands, socioeconomically disadvantaged groups very often do not get optimal mental health care.

The Royal Commission into Victoria’s Mental Health System has begun its public hearings this week in Melbourne. Hopefully, it will provoke improved collaboration between state and Commonwealth services, enabling better access to mental health services for those who need it most.

Unintended pregnancy, being younger, experiencing intimate partner violence and having insufficient emotional and practical support can lead to mental disorders, including depression, among pregnant women and new mothers.

Babies of depressed mothers are often underweight, a risk factor for later depression.

One study showed the mental health of four-year-old children is affected by factors including family income, maternal education and neighbourhood disadvantage. The researchers followed children in this study until the age of 14 to 15 and found the effects persisted.

Financial difficulties have been highlighted as an important determinant of mental health for university students, too.

Read more: People with a mental illness discriminated against when looking for work and when employed

Those on welfare support have a higher risk of mental disorders.

People in countries with greater socioeconomic inequality are more likely to have poor mental health than people in more equal societies. Australia is a high-income country, but there remains a significant gap between the richest in our society and the poorest.

Many health, educational, transport, housing, welfare and fiscal policy shifts could improve mental health in communities by addressing socioeconomic disadvantage and its impacts across the lifespan.

But while this issue persists, we need to look at what people from disadvantaged groups with mental illness are getting by way of treatment.

Most commonly, people with depression and other mental disorders will be prescribed medications, and/or receive “talking therapies” which might include sessions with a psychologist or other mental health professionals.

Importantly, evidence suggests antidepressants alone are less likely to be effective than a combination of antidepressants and cognitive behavioural therapy. So where antidepressant medication is recommended, psychological therapies should be available too.

But as we know, many Australians with common mental disorders such as depression live in areas of socioeconomic disadvantage. Here, despite the greater need, fewer psychological treatment services are delivered. Location of therapists and out-of-pocket costs can both act as barriers to accessing these services.

Ultimately, while poor people generally need mental health services more, rich people tend to access them at a much higher rate. So poorer people often receive only antidepressants, and alone, these may have only a modest effect, placing them on the back foot in terms of their recovery.

Much of this care provision rests with Commonwealth Medicare-funded services. State services, meanwhile, struggle to respond to needs left unmet.

Read more: If you’re coming off antidepressants, withdrawals and setbacks may be part of the process

The Commonwealth and the states must work together

Although spending on mental health has increased in recent years, so too has the system’s complexity and fragmentation. Delivering equitable mental health care for Australians is complicated by the federal structure and divisions of responsibilities.

For private provider services, there is a need for incentive structures that secure the delivery of free or lower-cost services for the people and in the places where there is greatest need.

The Victorian royal commission into mental health is asking about drivers of poor community mental health, and flagging the importance of community and economic participation in improving mental health.

We’d also be well-served by adopting newer strategies to facilitate access. For example, some people in difficult circumstances may nevertheless have broadband internet sufficient for video links. Getting psychological therapies into people’s homes through this route may be one way around other access problems.

Read more: Online therapies can improve mental health, and there are no barriers to accessing them

In a recent positive step, the Commonwealth and state governments have signed up to a set of tasks aiming to move towards better integrated mental health care planning.

The challenge for governments now is to cooperate with and support mental health service providers to ensure these services are better connected with each other, and importantly, more fairly and consistently delivered in relation to need.

Submissions for the Royal Commission into Victoria’s Mental Health System are open until July 5.

If this article has raised issues for you or you’re concerned about someone you know, call Lifeline on 13 11 14.