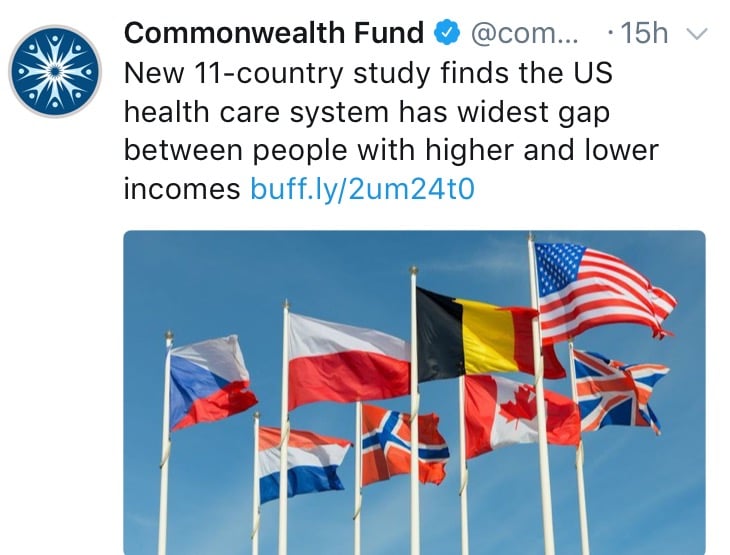 You’ve probably heard the news in the past few days that a report from the US-based Commonwealth Fund has ranked Australia’s overall health system performance as much better than that of the US, and second only (among countries analysed) to that of the UK.

If this sounds familiar, it’s probably because earlier reports from the same source have made similar findings and, of course, Donald Trump called it back in May, when he told a nervous-looking Malcolm Turnbull at a black tie dinner in New York, “You have better healthcare than we do.”

Trump was fresh off the plane from Washington and high on the success of the first part of his plan to repeal and replace the Affordable Care Act when he made these comments, but as Croakey prepares this post, the process has hit a roadblock, with a loss of support from several Republican Senators.

As the US copes with uncertainty and anxiety around the future of its healthcare system, the Commonwealth Fund’s report provides some indication of areas for improvement.

Every few years the internationally recognised, New York-based Commonwealth Fund prepares a report in the Mirror, Mirror series; there’s now more than a decade’s worth of reports dating back to 2004. The 2017 report was released last week and while the focus is primarily on lessons for the US (very timely as President Trump and Congressional Republicans seek to overturn key provisions of Obamacare), there are also some key lessons – and some warning signals – for Australia.

What’s in the Mirror?*

The 2017 report analyses 72 indicators for 11 OECD countries, that measure performance in five domains important to policy makers, providers, patients and the public. These are:

The data (from 2014-16) come from surveys of patients and primary care doctors and reports prepared by WHO and OECD.

On overall assessment, Australia ranks second behind the UK, with the US trailing in last place. Over the years since 2004 little has changed with these rankings; Australia is usually in fourth to second place, the UK is usually ranked at the top, and the US is always ranked at the bottom.

An examination of the details of this study reveals some reasons to be surprised at Australia’s high overall ranking, which may be due as much to an overall high standard of living – the social determinants of health – as to the quality of the healthcare system. Australia scores high on administrative efficiency, a function of what is (mostly) a single payer system, delivers good value for money (as measured by federal government healthcare spending per person) and has the best health outcomes, although other countries have made greater improvements over the decade 2004-2014. Measures for coordinated care are below average, although Australia scores well for patient engagement.

The report attributes a good performance primarily to universal coverage and ready access to primary care. In theory Australia has this – in practice, not so much for some segments of the population, which, because of geography or cost, struggle to access healthcare services in a timely fashion.

All self-congratulations and praise should be tempered by the realisation that Australia ranks very poorly on equity: this indicates that the universality of Medicare is being undermined by difficulties in affordable access for many Australians.

This has the potential to impact other key measures in the future, especially as there is currently little constraint on patients’ out-of-pocket costs. The extent to which the data in this report include the impact of the Medicare rebate freeze is not clear, so there is every likelihood that equity measures (which have steadily declined since 2004, when Australia ranked second among the nations studied) could worsen over time.

It is interesting to look at the differences between Australia, the US and the UK for health outcomes, which are assessed using three key indicators: population health (infant mortality, adults with two or more common chronic conditions, life expectancy at age 60); mortality amenable to healthcare (and how this has changed over the past decade); and disease specific outcomes (includes measures of in-hospital mortality rates for heart attack and stroke and cancer survival rates).

Australia has always ranked very well here, and the US and UK (despite the high performing NHS) rank lowest.

It is clear that this measure reflects more than access to healthcare and, as mentioned previously, likely reflects Australia’s overall better socio-economic status. Housing, nutrition, environmental quality and education all contribute to health. To the extent that socio-economic status is eroding and inequity, poverty and racial discrimination are increasing in Australia, health outcomes are at risk.

If there are doubts about this prediction, the UK results support the claim. In recent years the UK NHS has been under siege due to government austerity measures. The Commonwealth Fund analyses highlight the strength of this universal healthcare system, despite the constraints, but also make the case that good population health outcomes require more than access to healthcare services.

This report has two messages for Australian politicians and policy makers: we know how to do many things around health and healthcare well, but lack of commitment, focus and resources can quickly diminish these advantages. This is already happening for too many Australians. It’s time to strengthen Medicare, address inequalities.

*Note: The US data likely reflect very few outcomes of the changes implemented under Obamacare that will improve access to care. Hopefully the Republicans will fail in their efforts to repeal and replace the Affordable Care Act, and the flaws in it will be fixed to enable the law to work as intended.  Maybe then the US will no longer be at the bottom of the rankings.

Dr Lesley Russell is an Adjunct Associate Professor at the Menzies Centre for Health Policy at the University of Sydney.