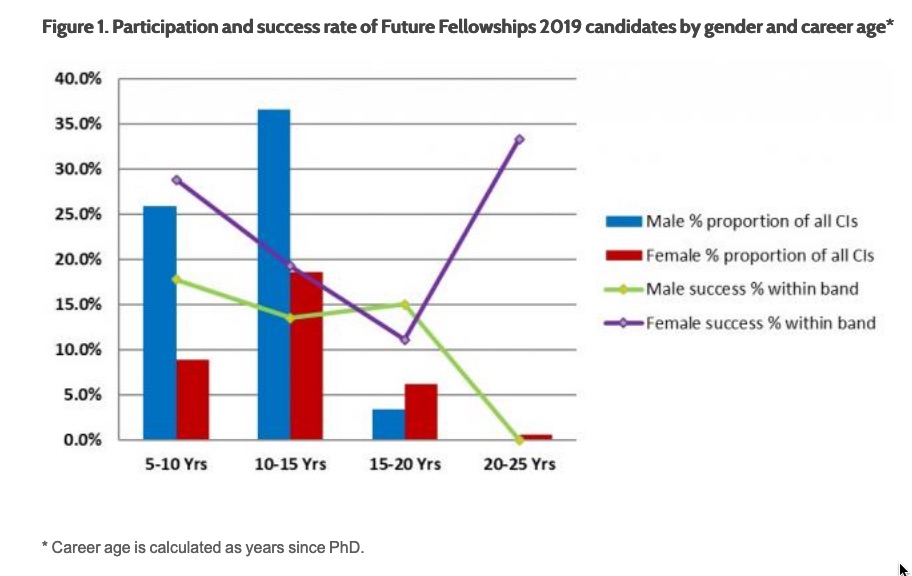 The ARC reports gender and career age of Fellowship candidates, but not Indigeneity. Source: ARC website

Where is Australian Research Council’s commitment to growing an Aboriginal and Torres Strait Islander academic workforce?

The Australian Research Council’s Future Fellowships, announced earlier this month, failed to include Aboriginal and Torres Strait Islander scholars, reports Associate Professor Sandy O’Sullivan, a Wiradjuri scholar and Deputy Head of the School of Creative Industries at the University of the Sunshine Coast. 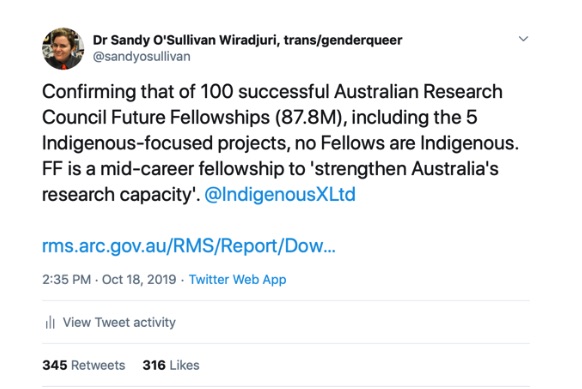 This year I applied for a Future Fellowship through the Australian Research Council. The success rate is low, only a hundred are appointed nationwide against the many hundreds of researchers who apply and I was aware that my chances were slim.

ARC grants – one of the main sources of research funding from the Australian Government – have a far lower participation rate by Indigenous applicants, although there is a push to increase our participation across all schemes.

The low participation of Indigenous applicants into all national competitive grant programs managed by the ARC was discussed at length at a round-table the ARC held in 2018.

It brought together senior Indigenous academics from across the country, charged with developing recommendations and strategies for the ARC to implement, with a reporting from this forum to the ARC for their consideration. The round-table focused not only on what research the academy wanted, but what research our Communities and Peoples needed.

The Future Fellowship program is highly competitive and aimed at building the careers and research trajectory of mid-career researchers.

I knew I had developed an application that could support edifying transformation for Aboriginal and Torres Strait Islander Peoples across gender, Indigeneity and representation, by measuring and demonstrating our strength, diversity, humour, agency and engagement.

The project would amplify the voice of queer Mob, and would do it on an Indigenous-authored platform (IndigenousX). I thought it was important research across my field, but was aware that that isn’t always enough to secure funding.

I didn’t get the Future Fellowship. In the assessment of it I had received very positive feedback with high scores. This happens; others scored higher than me and their programs were no doubt better expressed or pitched.

I’ve applied for ARC grants before, gotten some and not gotten others, this is how it goes. Again, sometimes you get the funding, other times you don’t, and if it’s important enough then you make it happen any other way you can and you keep applying.

I heard the outcome several weeks before the announcement and I also moved on to rework the application in the hope that it might be more favourable in 2020. The Future Fellowship isn’t a project, it’s a suite of strategies to undertake research. In the coming year this researcher, known as a Chief Investigator (CI), accounts for 50 percent (40 percent in the previous round) of the assessed value of the project, demonstrating that who leads it is the most important part of the application. It is their effort, their work and their leadership that is primarily being funded, and it is their career and capacity that is being supported and built through it.

Moving on from getting a knock-back was easy this year. Because of the round-table last year, it was clear that there had been a major shift in the way that the ARC approaches the assessment and eligibility of Indigenous applicants.

The round-table had made clear the importance of Indigenous participation across schemes. I was positive that, after getting good reviews from the ARC review panel, that if I didn’t get funded, it would be because other Indigenous-led projects that rated higher, would.

I was sure that of the 100 applicants that one of two things would happen, either they would appoint Indigenous Fellows to projects that could transform, or – sadly – there would be no Indigenous-focused projects and we would have to redouble our efforts to lift up suitable researchers through the strategies the round-table suggested, and get them funded.

I didn’t for a moment think that four projects (a fifth including Indigenous content) would have a focus on Indigenous Peoples and Communities, with no Aboriginal or Torres Strait Islander Chief Investigators.

When the list of successful fellows was released in mid-October, it wasn’t clear if any were Aboriginal and Torres Strait Islander researchers. So, I contacted the ARC and asked them how many Indigenous researchers were awarded Future Fellows.

Their official response was:

The ARC does not currently require applicants in the Future Fellowships scheme to identify if they are of Aboriginal or Torres Strait Islander descent.

Therefore the ARC is unable to advise if any of the successful applicants for the Future Fellowships scheme are Indigenous.” (Official communication from the ARC Stakeholder Relations to A/Prof Sandy O’Sullivan, 17th October 2019).

This is surprising, because while there was no explicit sense of what they would do if the numbers were low or non-existent (as they are here), their own reporting suggests that:

There are numerous other mentions of measurement suggested across all aspects of this strategy, but it seems that they have no way of actually carrying out this monitoring.

I asked if I could speak to someone from the ARC, and to their absolute credit, they took an hour out to talk to me.

As far as they knew, I could have been disgruntled about not getting funding, but they also understood my specific concerns about the round and answered very clearly that nothing had changed in the 10 years that the Future Fellow scheme had operated.

The round-table had no effect on it, and they had not (in 2019) tracked Indigeneity as a marker. They were able to confirm something, that by this time (a few days later) I had already ascertained due to responses from senior Aboriginal researchers across the country… of the 100 appointed fellows, none of them identified as Aboriginal or Torres Strait Islander. This was never released with the information about the projects.

I then asked what had come of the recommendations, and what impact this would have in the 2020 applications.

This was essential because in the day between contacting the ARC and having the conversation, I had received six messages from past unsuccessful Indigenous applicants into the program, with three of them having received very high scores in their feedback (this is often associated with successful applications).

So, I specifically asked about changes to ROPE, the Research Opportunity and Performance Evidence aspect of an application, where changes were flagged as a part of the official 2018 recommendation from the ARC response to the round-table:

ROPE is a measure that provides an opportunity to explain the context of the work and any interruptions or special circumstances for the researcher in their research trajectory. The fundamental implications of being an Indigenous researcher in the Western academy that were shown in the report, including community, industry and academic burdens that our non-Indigenous colleagues do not face at the same level, seem to have been dismissed or not included when it comes to mid-career development, and this could in some way be addressed with the ROPE if changes were made to it.

Their response was that I should read the requirements carefully, but as in all aspects of the Future Fellowship application, no changes were made as a part of the multiple strategies (found here), to ROPE or any other aspect of the application. They did not, or have not yet, followed their own adopted recommendations.

The round-table that formed this and other recommendations was made up of brilliant Indigenous academics and researchers.

This is why they took the time out of their ridiculously busy schedules to do this (unfunded) work for the ARC. To have it ignored and to fail to even understand the measures for which they have agreed is a slap in their faces.

I wasn’t the only one surprised by this. When it was tweeted, I had several hundred initial retweets that resulted in tens of thousands of ontweets and responses. The theme was consistent that those responding found it hard to believe this was still happening in 2019.

I should say here, that it’s considered poor-form (or at least an unwritten rule) to mention when you’re unsuccessful in funding. It apparently isn’t good for building your academic brand.

Like many of us, I’m less worried about my academic brand than I am about the truth in where funding is going and who is benefiting from this funding.  The Future Fellowship funding is not just about growing meaningful research, it’s specifically about growing an academic workforce.

And we’re typically – and in this year, fully – missing from it.

• Croakey has sought a response from the ARC communications office, as well as from the office of Education Minister Dan Tehan (see his media statement on the ARC announcement here).

On 1 November, Croakey received this statement from Minister for Education Dan Tehan:

There is no ‘omission’ of Indigenous researchers from the ARC’s Future Fellowships scheme, or any other grant funding scheme.

All projects funded by the ARC are on the basis of excellence.

The ARC does not currently require applicants in the Future Fellowships scheme to identify if they are of Aboriginal or Torres Strait Islander descent so the data does not exist.”

On 1 November, Croakey received this response from the ARC:

“There is no ‘omission’ of Indigenous researchers from the ARC’s Future Fellowships scheme, or any other grant funding scheme.

The ARC is implementing change for the ARC’s funding schemes opening this year, all researchers will be required to respond to the question if they are of Aboriginal or Torres Strait Islander descent in their profiles—although it is possible for them to say “Not Stated”.  This will provide the ARC with more substantive information about the extent of involvement of Aboriginal and Torres Strait Islanders in its programs.

In grant guidelines that have been mostly recently released, an additional requirement has been included to ensure that where Aboriginal and Torres Strait Islander research is being undertaken, the applicant must describe:

As part of a broader review of the application forms, the ARC reviewed the section of the form that relates to academic career interruptions and other considerations that might impact on a researcher’s research outputs—known as the ROPE statement. The ARC has also maintained the specific reference in the Instruction to Applicants which encourages Aboriginal and Torres Strait Islander researchers to identify community obligations which may have impacted on their academic career.

• The article has also been published by IndigenousX and The Australian Critical Race and Whiteness Studies Association.