Home Croakey projects Where now for health journalism at such a challenging time? Join us in building #CroakeyFutures… 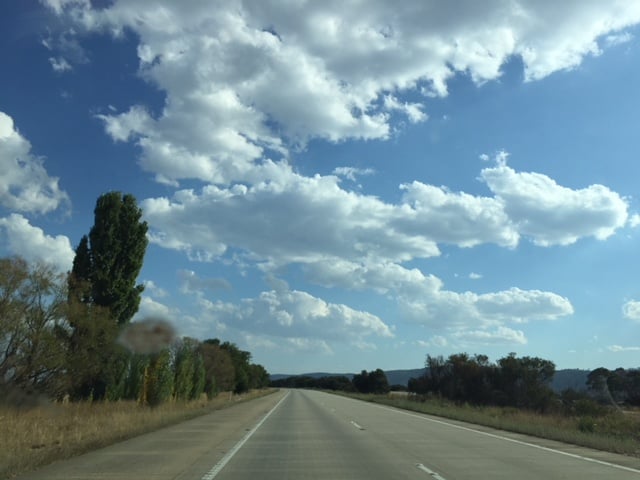 All roads lead to Albury this weekend for #CroakeyFutures

Where now for health journalism at such a challenging time? Join us in building #CroakeyFutures…

Members of “the Croakey Connective” are heading to Albury in southern NSW this weekend to plan for the year ahead, including moves to establish Croakey more formally as a not-for-profit organisation.

We will discuss forthcoming Croakey series addressing topics such as out of pocket healthcare costs, out-of-the-box solutions to entrenched health problems, and the relationship between neoliberalism and health.

We will also brainstorm new projects, including the inaugural #CroakeyRead, a virtual and IRL event where we attempt to do an all-nighter on the longest night of the year, 21 June – reading, sharing and discussing our favourite books and writing.

Please follow #CroakeyFutures if you would like to participate in these conversations over the weekend – we would love to hear your thoughts and suggestions about how we can best use our limited resources in line with our mission:

… to provide a public service for those who care about the community’s health and well-being… to take a holistic view that recognises the health of individuals is connected to the health of communities, societies and the planet… Our work is underpinned by an appreciation of the importance of equitable access to health-producing environments as well as to healthcare, particularly primary healthcare. We look for health in all policies, not only from the health sector or health portfolios.”

And also follow #CroakeyGO to join some walking journalism on Wiradjuri Country on Monday morning.

Our meeting is timely, following hot-on-the-heels of a recent Senate inquiry that documented both the serious challenges facing public interest journalism and a lack of political resolve to respond with bold policy action.

While the Labor-dominated committee made some useful recommendations, it shied away from substantive reforms recommended by many submissions (as per Dr Tim Dunlop’s tweet below). 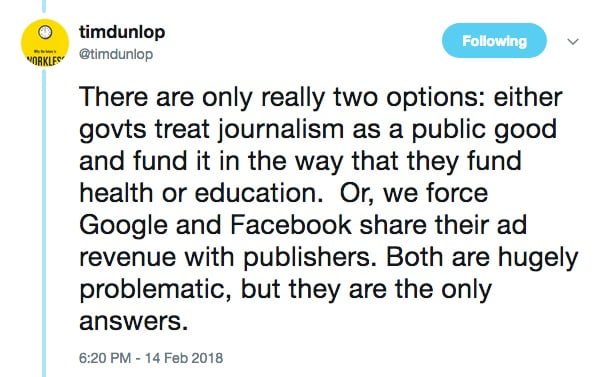 Nor were the Coalition Senators’ separate comments in the report encouraging. They seemed to think their work was largely done through the Regional and Small Publishers Jobs and Innovation package, which the Nick Xenophon Team negotiated last year in exchange for passage of the Government’s controversial media law reforms favouring the corporate end of town.

The package, including regional cadetships and journalism scholarships, will not benefit niche operations like Croakey; the $50 million innovation fund is for small and/or regional publishers with a turnover of between $300,000 and $30 million a year that are members of the Australian Press Council (which, strangely enough, did not even make a submission to the Senate inquiry despite repeated requests that it do so, according to the committee’s report).

You’d have to believe in the tooth fairy to think this short-term package, a “one-off cash splash over three years”, will address the immensity of challenges facing public interest journalism.

However, the Senate report did include some important recommendations (as previously outlined by Professor Matthew Ricketson), including for deductible gift recipient status to be extended to not-for-profit news media organisations engaging in public interest journalism, and for the Commonwealth to work with state and territories through the Council of Australian Governments to review of Australian defamation laws.

Scale of the problems

Just to reiterate some of the key concerns presented to the Senate Select Committee on the Future of Public Interest Journalism:

Our Albury meeting is also timely as the Australian Journalism Review has recently published an edition focused on health journalism, which overall makes for sobering reading. 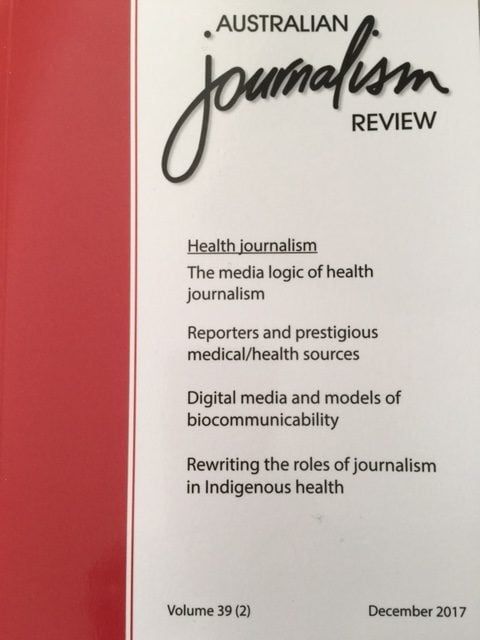 In their introduction, guest editors Dr Catriona Bonfiglioli from the University of Technology Sydney and Professor Trevor Cullen from Edith Cowan University write that health journalism is under great pressure from redundancies of experienced health journalists and other industry trends.

Preliminary findings from Bonfiglioli’s research suggest a 29 per cent reduction in three leading newspapers’ coverage of health and science from 2005 to 2014.

These newspapers’ coverage of major health issues (cancer, heart disease, obesity, dementia and diabetes) fell 31 percent, from 4,695 articles in 2005 to 3,226 in 2014 (of course, these figures do not tell us anything about trends in the quality of reporting).

In their article, Meeting the challenges of reporting on public health in the new media landscape, Maryke S Steffens, Dr Adam G Dunn and Associate Professor Julie Leask explore how dramatic changes in the media landscape have affected health reporting, suggesting “a loss of quality in the area and a proliferation of poor-quality sources of health information and misinformation”.

They note that specialist health journalists, a disappearing breed, have been found in previous Australian research to report more accurately on complex issues and were less reliant on information from media releases, producing original stories of greater depth.

We believe the loss of specialist health journalists, together with the increased diffusion of low-quality information and misinformation, has had a detrimental effect on the translation of public health evidence into the public domain.

Journalists, health experts, governments and the public each have a role to play in addressing these challenges of the new media landscape and supporting the reporting of high-quality health information.”

The edition includes many other articles likely to be of interest to Croakey readers, including The media logic of health journalism: strategies and limitations in covering social determinants, examining how the determinants that contribute to roughly three-quarters of population health are under-covered in journalism; A critical eye or uncritical reverence? Why some reporters neglect to challenge prestigious medical/health sources.

Other articles explore the impact of digital and social media upon the coverage of mental health issues, lessons from media reporting of Indonesia’s polio outbreak in 2005-2006, suggestions for building health journalism capacity, especially in developing countries, and ideas for improving media coverage of health policy matters.

We are delighted to report that the edition also includes two articles relating to Croakey: Outlining a model of social journalism for health, and #JustJustice: rewriting the roles of journalism in Indigenous health. (Please contact us if you’d like copies). 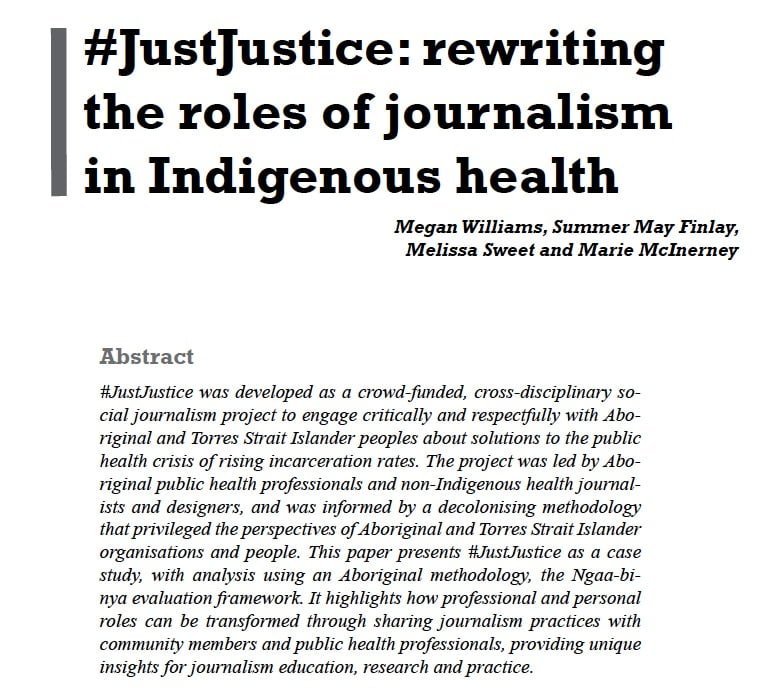 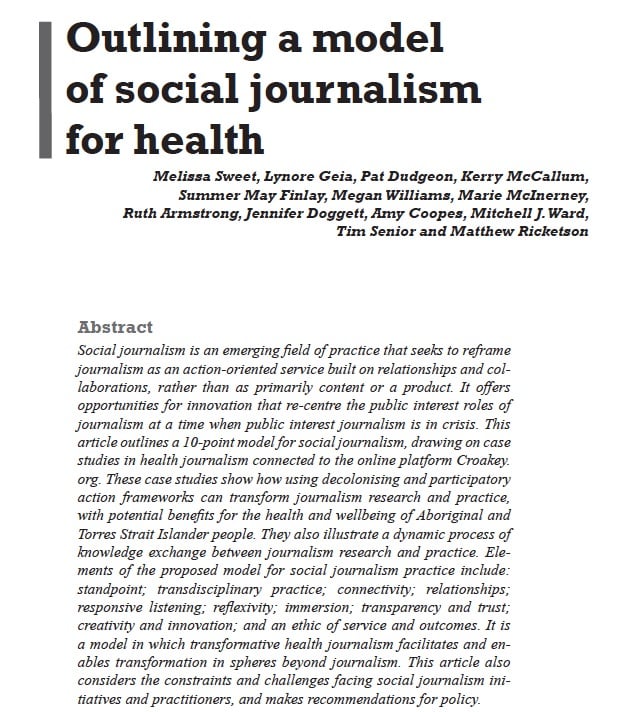