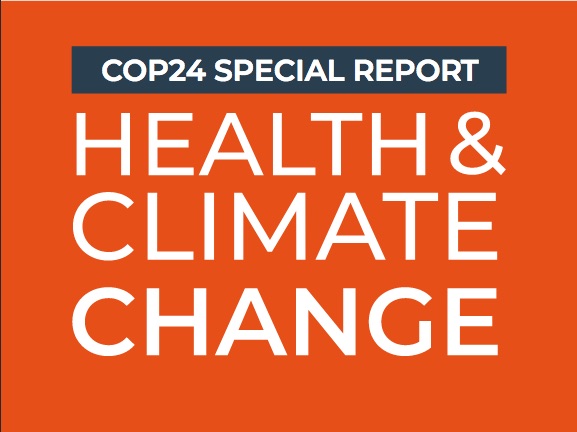 Detail from cover of WHO report

WHO calls for health leadership across all sectors for climate action

The World Health Organization (WHO) has urged the health sector to lift its game in working towards climate change mitigation and adaptation, and to redouble efforts in advocating for effective climate action.

A new WHO report also stresses the importance of a health in all policies approach to drive intersectoral action to address the global health threat posed by climate change.

It calls for greater coordination among the health, energy, transport, agriculture, food systems, urban planning and other sectors to set priorities that ensure maximum benefits for both health and climate.

The report says there is “a clear public health case for effective, constructive reform of fossil fuel subsidies and of carbon pricing”, and suggests building public support for such fiscal measures by reinvesting revenues raised in socially beneficial investments such as health.

If the mitigation commitments in the Paris Agreement are met, the report says millions of lives could be saved by the middle of the century, through reduced air pollution.

It says health care systems should both increase climate resilience and mitigate carbon emissions, through the use of appropriate low-carbon technology for care, low-carbon building design and construction, investment in renewable energy and energy efficiency, and sustainable waste, water and transport management.

Health systems are also urged to use telemedicine, minimise use of anaesthetic gases that emit high levels of greenhouse gases, have procurement policies for low-carbon supply chains, promote sustainable, healthy diets, and have strategies for withstanding extreme weather events.

The report was launched at the United Nations Climate Change Conference (COP24) in Katowice, Poland. For more background on this meeting’s efforts to establish a rule-book for climate action, check these rolling reports for the Climate Council from Professor Hilary Bambrick, Head of the School of Public Health and Social Work at Queensland University of Technology.

The COP24 Special Report Health and Climate Change says the health impacts of climate change could force 100 million people into poverty by 2030, with strong impacts on mortality and morbidity. The world’s warmest and poorest countries will be most severely affected, particularly in South Asia.

The report cites a highly conservative estimate of 250,000 additional deaths each year due to climate change projected between 2030 and 2050; of these, 38,000 will result from exposure of the elderly to heat, 48,000 from diarrhoea, 60,000 from malaria and 95,000 fromchildhood undernutrition.

However, these figures do not include the many other direct and indirect health effects of climate change.

An extreme heatwave in Europe in 2003, which was made twice as likely by climate change, contributed to over 70,000 additional deaths across Europe. Meanwhile, more than 90 percent of natural disasters affecting Pakistan over the last 40 years have been triggered by climate change.

A changing, more variable climate is now recognized as the most likely, highest-impact global risk to society as a whole and which presents a clear and present danger to health security.

The report says the Paris Agreement is potentially the strongest health agreement of this century, as it addresses not only the health risks associated with climate change through mitigation and adaptation but also addresses the Sustainable Development Goals (SDGs) – although it notes that the SDG indicators for climate change do not currently include health.

The report urges the health sector to be more actively involved in UN Framework Convention on Climate Change (UNFCCC) negotiations for adaptation and the Paris Agreement itself.

“Such involvement would address the longstanding problem in most countries: that health is threatened by climate change, but few have prioritized plans to address it,” the report says.

Of 41 national Adaptation Plans of Action submitted by least developed countries to the UNFCCC, 95 percent recognised that health is particularly affected by climate change, but only 11 percent of their priority projects addressed health.

The report urges the health community to mobilise effectively in a similar way as it has for tobacco control.

It recommends bringing together overlapping health campaigns on climate, air pollution and non communicable diseases (NCDs), and urges efforts to “facilitate and promote the engagement of the health community as trusted, connected and committed advocates for climate action”.

It notes that Member States in the WHO European Region have committed themselves to prepare national portfolios of actions on environment and health by the end of 2018, including on climate change and health.

“The objective is to make health systems environmentally sustainable and to reduce their environmental impact by increasing the efficient use of energy and resources, sound management of medical products and chemicals throughout their life cycle and reducing pollution by safe management of waste and wastewater, without prejudice to the primary mission of health systems: to promote, restore or maintain health.”

The diagram below from the report represents the WHO operational framework for building climate-resilient health systems based on six building blocks common to health systems (inner ring), with 10 components to strengthen climate resilience (outer ring). 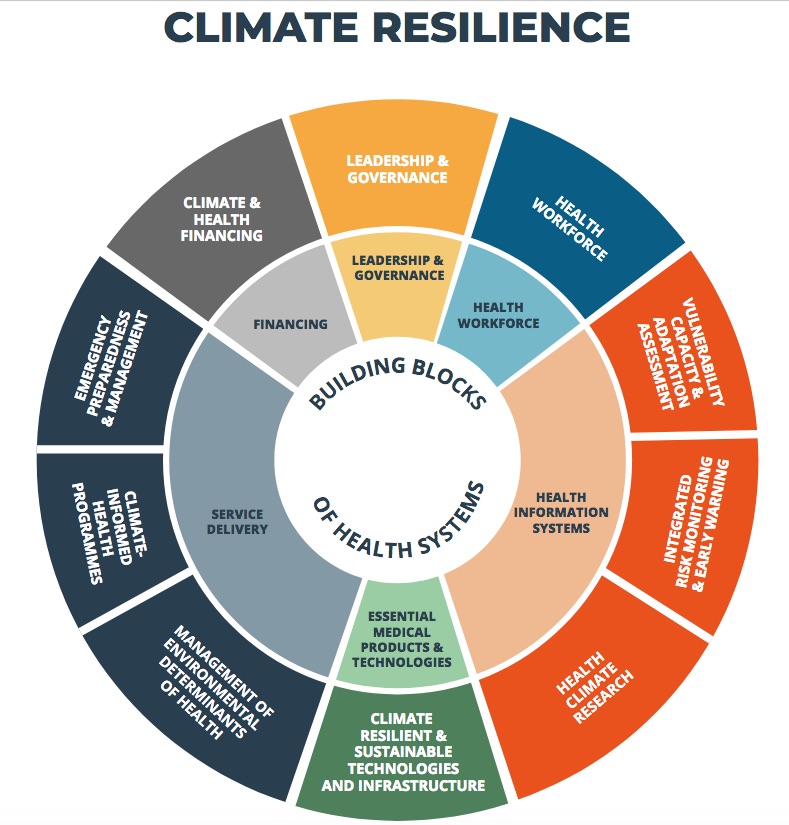 From cities to farms

The WHO report highlights the important roles of both cities and agriculture in tackling climate change.

Many of the actions necessary to reduce carbon emissions, improve health and increase resilience are subnational, particularly involve cities. Local authorities are often wholly or partly responsible for services such as energy provision, transport, water, sanitation and health.

The report highlights many examples of policy and market failure, describing lack of investment in climate change mitigation and adaptation as “the greatest market failure that the world has seen”.

Although the cost of renewable energy generation is falling quickly, these sources still comprise only 25 percent of global electricity production, when they need to provide at least 65 percent of the global primary energy supply by 2050 if the global temperature rise is to be kept below 2.0 °C.

The report also notes that projections for coal use are inconsistent with the Paris Agreement targets, with plans for 1,082 new coal plants globally.

“If these are built, the world will be locked onto a carbon-intensive pathway, still heavily reliant on coal, for the next 40 years, with severe implications for human health,” the report says. 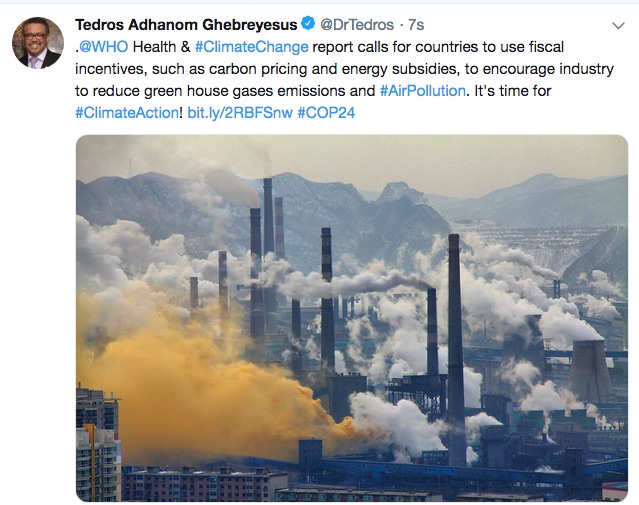 The report also underscores the connections between climate change and air pollution, noting that the sectors producing most greenhouse gases – energy, transport, industry, agriculture, waste management and land use – are also the main sources of fine particulate matter and other important air pollutants.

In certain areas, the frequency and extent of wildfires – and with them, emissions of particulate matter and other pollutants – are projected to increase.

In other areas, a drier climate will lead to more dust storms; in others, pollen and other airborne allergens are likely to become more prevalent.”

The report also includes this call to action from health organisations. 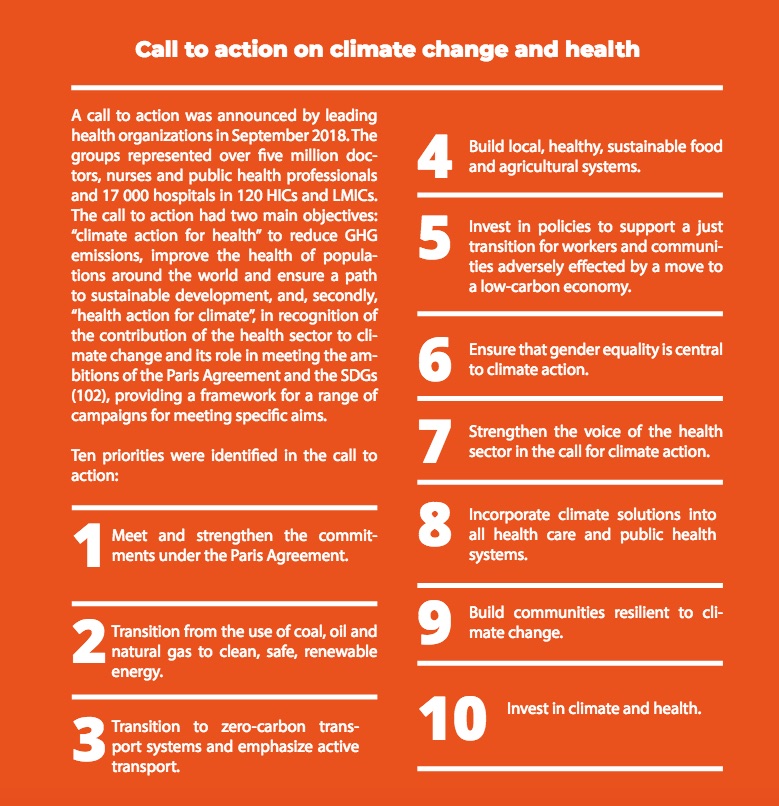