Home The Croakey Archives Croakey projects archive #JustJustice Who is talking for us? The silencing of the Aboriginal woman’s voice about violence 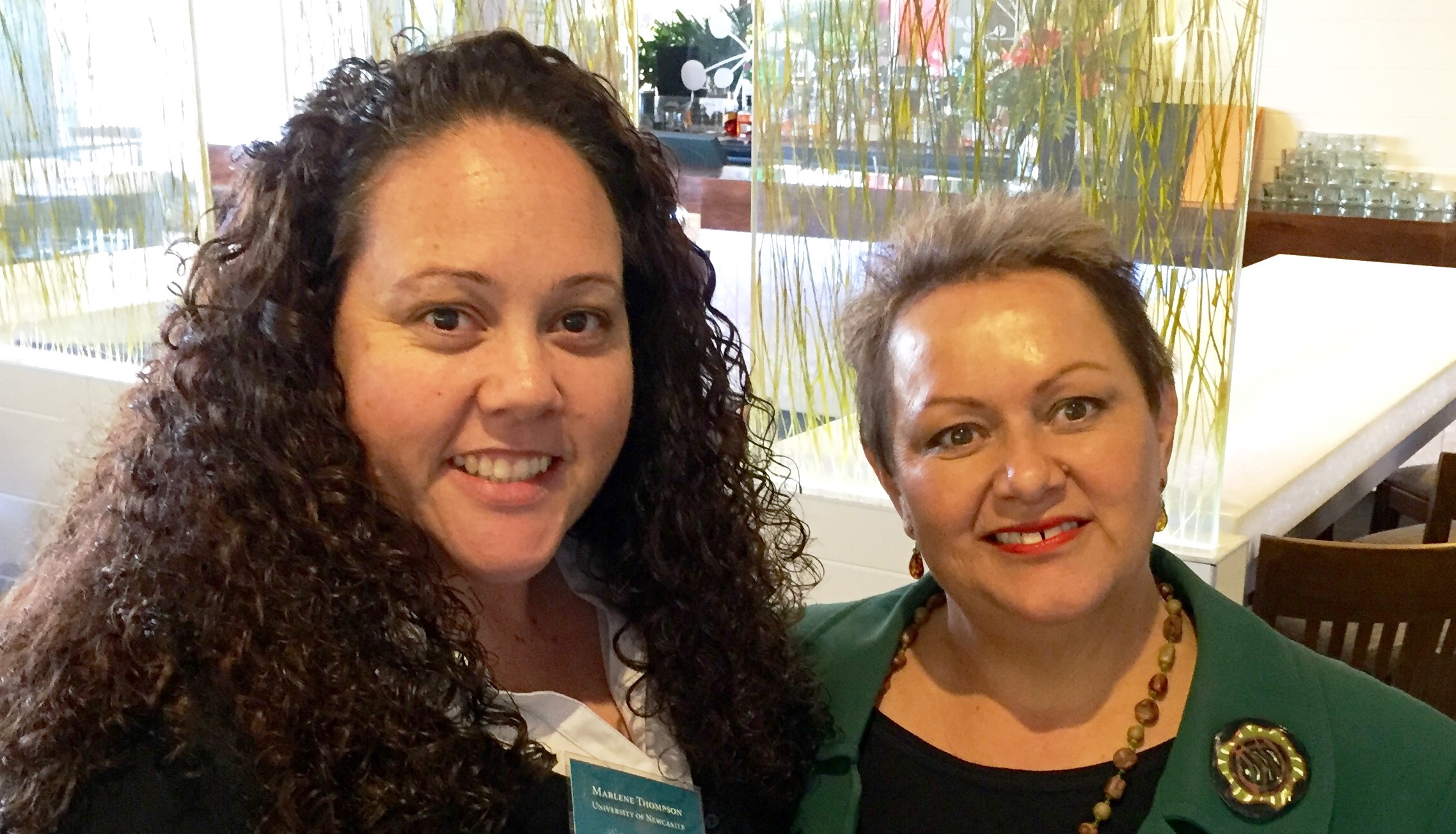 Marlene Longbottom and Professor Bronwyn Fredericks: "We are taking our power back"

Who is talking for us? The silencing of the Aboriginal woman’s voice about violence

Aboriginal women have been speaking out and identifying solutions to violence against them for decades, despite recent reports seeking to suggest otherwise.

It’s time that governments and others listened to and acted on these longstanding calls for proper funding of community-based services, according to three “assertive and passionate” Aboriginal women and researchers, Marlene Longbottom, Dr Yvette Roe and Professor Bronwyn Fredericks in their contribution below to Croakey’s #JustJustice series.

It’s particularly timely given that the Council of Australian Governments today announced it would hold a summit on violence against women, in Brisbane on 27 and 28 October.

“It seems that someone has claimed the space to speak on Indigenous violence and that space does not necessarily belong to Indigenous women” Sonia Smallacombe (2004, 50)

This intergenerational and multigenerational transference of trauma (Al-Yaman et al., 2006) and the associated post-traumatic stress disorder (Atkinson, 2002, Linklater, 2014) are what we now witness. The internalising of oppression and the externalising expressions of violence result from cumulative traumatic experiences over time (Al-Yaman et al., 2006, Atkinson, 2002, Linklater, 2014).

Violence towards Aboriginal women is not isolated to one particular community, State or Territory. They are disproportionately over-represented as victims of inter-personal violence homicide in New South Wales (New South Wales Governement., 2015, Sherwood and Kendall, 2013).

Significantly concerning is Aboriginal women are moving from the positioning of victim to offender, as a means to protect themselves from violent partners (New South Wales Government, 2015, Sherwood and Kendall, 2013).

Thus violence in Indigenous communities remains a key risk factor or vulnerability to the increasing incarceration rates, not only for Aboriginal men but also as more Aboriginal women are being incarcerated for violence against violent perpetrators (Sherwood J and Kendall S., 2013).

We write this paper from a standpoint as Aboriginal women first and foremost, academics, who seek to express our deep concerns and have more than a key interest in addressing violence with Aboriginal women. We intentionally assist women in sharing their stories of survival.

In light of the research and media attention, it is evident that Aboriginal women’s voices are not being heard, thereby raising the question: who speaks for who? Aboriginal women are either not given the platform to speak, nor are they heard when they do.

Often the privilege of being heard is granted to men, both Indigenous and non-Indigenous men, or white women (Moreton-Robinson, 2000). While Aboriginal women may speak, their advocacy may be misunderstood or interpreted as anger, or they may be positioned as angry and aggressive women.

Rather than being interpreted and positioned as assertive and passionate Aboriginal women, it results in Aboriginal women being defined as angry Black women and as a result dismissed as being irrelevant (Fredericks, 2010, Griffin, 2012).

So be it. We make no apology for being three passionate and assertive women who seek to advocate and who may be interpreted and understood as three angry Black women. We are strong in our Aboriginality and are not complicit in our views about the urgency to address violence against Aboriginal women.

Uninformed or Ill-informed commentators have privilege

Violence towards Aboriginal women came to the attention of the media with the recent comments of Mr Warren Mundine (Mundine, 2016). While Mr Mundine’s comments are welcomed, the issue is not new. He falsely accuses feminists and progressives of not speaking up on the issue of voice.

The reality is that women, progressives and feminists have attempted to bring the issues of interpersonal violence to the forefront of Australia’s narrative for a long period of time (Atkinson, 2002, Behrendt, 1993, Ingram, 2016, Moreton-Robinson, 2000, O’Shane, 2002, Smallacombe, 2004, Langton, 1988).

Amy McQuire and Celeste Liddle are two of the many Indigenous women who wrote in response to Mr Mundine’s claims of complicity in Aboriginal communities (Liddle, 2016, McQuire, 2016). Further, in 2015, media reported the story of Marlene Tighe from the South Coast of NSW, who shared and continues to share her story of survival after her former partner attacked her with a hammer after learning of her intentions to leave the relationship (Bowden, 2015).

More recently, Linda Burney, who is an Aboriginal parliamentarian and self-identified survivor of intimate partner violence, challenged Mr Mundine, by reminding him that she and many others had been lobbying for years for recognition and changes about domestic and family violence (Caccetta, 2016).

Further, MP Burney asserts in her opinion piece in The Australian (dated 11 October 2016) that “the issue has been raised by communities for a very long time however the response by governments was a shrugging of shoulders” (Burney, 2016). MP Burney says the recent media coverage provides for the opportunity to continue the discussions and calls for the funding that was removed from front line services to be reinstated.

The stance Mr Mundine takes in asserting community complicity implies there is a state of paralysis in communities to take action while also oppressing the voices of the women. The responses by these women can only be described as brave and courageous – and not complicit.

We believe that Mr Mundine’s claims that community and advocates are silent about the issue adds to the silencing of these brave and courageous women. While we do agree that some sections in the community shun the discussion related to violence, there are others who do speak up and talk about the issue.

A blanket statement of community complicity denies and further silences those brave enough to speak out. The difference in all of the discourse is that Aboriginal women often are not afforded the opportunity to speak to share their stories. This is evident in the media responses to Mundine’s commentary.

More recently, The Little Children are Sacred report (Northern Territory Board of Inquiry into the Protection of Aboriginal Children from Sexual Abuse et al, 2007) was the catalyst for an emergency response in the Northern Territory (Australian Government, 2008).

Yet again we remain disheartened as the reports have not lead to the systematic reforms that tackle the horrendous violence inflicted upon Aboriginal women (Maddocks, 2016).

A contemporary literature on Indigenous women’s experiences of interpersonal violence identified, in what is a continuous discourse, that Aboriginal women’s voices are absent and calls for research inclusive of their stories (Olsen and Lovett, 2016). Put quite simply, those closest to the issue are likely to know how to address it if afforded the opportunity.

The fact that Aboriginal men and non-Aboriginal women and men speak for and about violence that affects Aboriginal women specifically, further perpetuates the silencing of Aboriginal women. The Bell–Huggins debate is another example (Ingram, 2016, Moreton-Robinson, 2003, Smallacombe, 2004).

Addressing the ongoing issues in Aboriginal communities around violence cannot be approached from the one-size-fits all response. Understanding that violence is an expression of trauma and a major vulnerability to health and wellbeing is vital.

Unlike the approach of feminism that seeks to separate Aboriginal women from Aboriginal men, we understand the need for Aboriginal men to be part of the solution; however, one voice should not take precedence over the other (Moreton-Robinson, 2000).

Additionally, there needs to be an understanding of how Aboriginal communities have adapted and adopted the patriarchy and the colonial systems which victim-shame and blame Aboriginal women for not seeking help and speaking up (Moreton-Robinson, 2000, Sherwood and Kendall, 2013).

Quite clearly, for almost thirty years, Aboriginal women have spoken about the violence in communities, have suggested solutions, yet there is little evidence that their advocacy has been taken into consideration.

Community responses to violence must be designed to invest and support the individuals, families and communities. Additionally the systemic and structural environments which maintain the silencing of Aboriginal women, such as the law and corrections systems, need to be addressed.

In many communities, organisations that deliver front line services to this vulnerable population are severely under resourced. We implore that community-based approaches and services must be supported by adequately funded services that are equipped to support Aboriginal women, men, their families and communities.

Addressing the issue starts with Aboriginal women being given the opportunity to share their stories of survival in a supportive and culturally safe manner without the fear of retribution by the perpetrator and the community.

Time and time again, we have seen very little action to support and protect those whom are most vulnerable – Aboriginal women and children. It is time that men and women, regardless of Aboriginal status, make a space for Aboriginal women to speak about their experiences while also offering practical solutions.

We propose that the way to address the issue is to restore the power that was taken from Aboriginal women from the time of colonisation (University of Saskatchewan, 2016). We support processes that re-empower Aboriginal women (Fredericks, 2010).

We are taking our power back and if this is interpreted as us being aggressive and angry, rather than being passionate and advocating with a sense of urgency, then you need to deal with this. We have more important issues, like addressing violence in our communities, to deal with!

• Marlene Longbottom is undertaking a PhD at the University of Newcastle on Aboriginal women’s experiences of interpersonal violence and support mechanisms available in the Shoalhaven. Follow on Twitter: @MLongbottom13

You can read more than 80 #JustJustice articles published to date here.