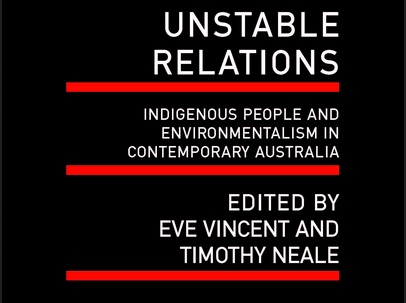 Why ‘green-black’ alliances are less simple than they seem

A new book exploring relationships between Aboriginal and Torres Strait Islander people and wider environmental movements, Unstable Relations, is likely to be of interest to Croakey readers following our #JustClimate series.

In the article below, republished from The Conversation, the book’s editors – Dr Timothy Neale from Deakin University and Dr Eve Vincent from Macquarie University – give an overview of some of the stories told in the book, from South Australia, the Northern Territory, Victoria and elsewhere.

And please make a note in your diaries for Monday 27 March when there will be Two Hours of Twitter Power for #JustClimate from 12-2pm AEST, moderated by Professor Kerry Arabena, President of the International Association for Ecology and Health, and Summer May Finlay, Croakey contributor and public health practitioner.

In Australia and across the world, Indigenous people are resisting developments that threaten their lands. Wangan and Jagalingou people stand in opposition to the planned Carmichael coalmine in Queensland, while the Sioux people are holding firm in their struggle against the Dakota Access Pipeline at Standing Rock.

As these contests intensify, they reveal that Indigenous peoples often have limited say over what happens on their country. When pitted against powerful state and corporate actors, Indigenous people may seek assistance from others, such as environmentalists, to protect their interests and further their aspirations.

In Australia, these arrangements have sometimes been called “green-black alliances”. However, as we argue in our new book Unstable Relations, it is misleading to contend that Indigenous people and environmentalists necessarily share (or don’t share) the same ends and motives.

They are neither natural allies nor enemies. Instead, we suggest, close attention to the past and present of “green-black” meetings in Australia reveals that their relationships are surprisingly unstable, and are shaped by shifting legal and social contexts.

To understand how and why these collaborations occur, and how and why they can fall apart, we need a better comprehension of the particular processes and people involved, rather than treating them all as uniform.

Since 1966, governments in Australia have progressively recognised different forms of Indigenous land rights. Perhaps the most well known is “native title”, which was first recognised in the High Court’s 1992 Mabo decision.

Native title applies only to Crown lands and pastoral leases, only authorises limited land use rights, and is proven through condescending tests of cultural “continuity”. Because of the history of colonial dispossession, some groups fail to meet these tests; others refuse to do so. These problems notwithstanding, multiple forms of Indigenous land rights together cover more than a third of the continent, much of it in remote Australia.

As we have recently seen, mining companies and others often greet changes to land rights regimes with dire warnings about economic impacts. The “Mabo madness” of the 1990s proved overblown. By and large, Australia’s various land rights regimes have been highly accommodating to miners and mineral extraction.

In violation of United Nations principles, Australia’s native title laws do not recognise Indigenous peoples’ rights to consent over what happens on their country. Rather, they simply allow a right to be consulted for six months. This gives rise to contractual agreements, such as Indigenous Land Use Agreements, which effectively grant mining companies and others a “social licence to operate” in exchange for a mixture of cash and in-kind benefits.

Indigenous academic Marcia Langton and others have argued that this era of “agreement-making” has the potential to lift Indigenous people in remote areas out of poverty. According to this argument, environmental groups that raise concerns about industrial activity do so at Indigenous peoples’ expense.

A simplified version of this story is often found in the mainstream media, casting environmentalists as out-of-touch urbanites and portraying Indigenous groups who work with them as dupes or somehow illegitimate.

Meanwhile, many Australians seem to accept that extractive developments are both inevitable and beneficial, despite complex evidence to the contrary.

The alternative view is the one depicted in this painting by Garawa artist Jacky Green, in which a road train covered with dollar signs represents “the wealth being taken away from us, from our country”.

The anthropological and historical research presented in our book highlights that, far from being manipulated, Indigenous people who are opposed to a particular development often seek to enter into strategic partnerships with environmentalists. Crucially, these are not inevitable alliances but negotiated collaborations, which can run into problems if circumstances change.

The controversy that erupted in recent years over Queensland’s Wild Rivers Act was shaped by collaborative relationships established between the Australian Conservation Foundation, The Wilderness Society, and Cape York Land Council and its former chairman Noel Pearson decades earlier. Whereas these groups had formalised an alliance in the mid-1990s, which successfully lobbied for land rights and the return of country to traditional owners in Cape York, they split in the late 2000s over how to regulate planning on that country.

Nonetheless, while a public controversy raged, together these groups continued to privately negotiate further outcomes over jointly managed national parks.

Another quite different example is the campaign against a major liquid-gas processing plant and port at Walmadany (James Price Point) in Western Australia. The ethnographer Stephen Muecke has characterised the relationship between those Goolarabooloo people who sought to halt the project and their green supporters as the most successful such collaboration in Australia’s history.

This was based on long-term personal relationships between some of those involved and, crucially, the media and scientific resources that environmentalists were able to bring to the campaign. “Citizen scientists” took their cue from Goolarabooloo people’s firsthand knowledge of local environs, conducting highly successful surveys of turtle nests and bilbies.

In our book, we and other contributors point to many other productive but nonetheless unstable relationships in South Australia, the Northern Territory, Victoria and elsewhere.

Environmentalists often seem oblivious to the contractual landscape in which they are acting. They mistake their relationships with particular Indigenous groups as a natural alliance, based on received ideas of Indigenous connection to country.

But as Yorta Yorta activist Monica Morgan has pointed out, Indigenous people have a holistic relationship with their country, which doesn’t always fit with the specific goals of environmentalists. When green groups assume that Indigenous peoples’ “traditional culture” is necessarily conservationist, this can lead them to denigrate Indigenous people who pursue economic opportunities.

Again, specific case studies show how these arrangements are far from simple. At the former pastoral property of Pungalina in Queensland’s Gulf Country, Garawa people return to “Emu Dreaming” places now managed by non-Indigenous conservationists. There they negotiate an ambiguous field of responses to their presence, ranging from interest and respect to anxiety.

In Arnhem Land, Kuninjku people express ambivalence about the problem of the environmentally destructive buffalo in an Indigenous Protected Area. The buffalo are simultaneously recognised as companions, an environmental problem, and a crucial source of meat in hungry times.

As long as Indigenous people have limited capacity to decide what happens on their country, and as long as environmentalists continue to oppose destructive developments, their interests will sometimes intersect. However, as these situations arise and alliances form, we should be careful to avoid essentialising or conflating those involved. “Green-black” alliances will certainly be productive at times, but they will always be unstable.

• This article was initially published at The Conversation.