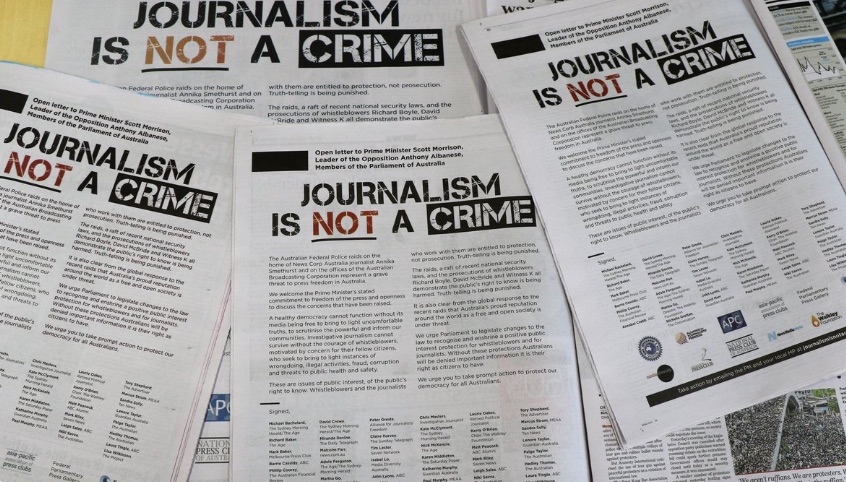 Why media suppression is bad for our health

Introduction by Croakey: Newspapers around the country have published an open letter from journalists and journalism organisations warning that press freedom in Australia is under threat, and calling on the Federal Parliament to “recognise and enshrine a positive public interest protection for whistleblowers and for journalists”.

A healthy democracy cannot function without its media being free to bring to light uncomfortable truths, to scrutinise the powerful and inform our communities.

Investigative journalism cannot survive without the courage of whistleblowers, motivated by concern for their fellow citizens, who seek to bring to light instances of wrongdoing, illegal activities, fraud, corruption and threats to public health and safety.”

Croakey urges our readers to consider signing the letter here.

As we reported recently, the recent attacks on press freedom in Australia are expected to have chilling effects on public policy development.

In the article below, Paul Laris and Professor Fran Baum argue that police intimidation of journalists and whistleblowers undermines public health in many ways.

Raids by the Australian Federal Police on the home of News Corp journalist Annika Smethurst and on the Sydney offices of the ABC have been touted by the Government and the AFP as police simply doing their job and upholding the law in relation to matters of national security. This has been shown to be patently untrue.

The journalists were investigating matters of public interest. In the ABC case, the whistle blower had already outed himself. The Smethurst story revealed a proposal to spy on Australian citizens that would have had to go  be presented as legislation in parliament to be implemented.

The raids appear much less about justice or security, and primarily about intimidating and suppressing media investigations.

Dennis Atkins, journalist for The Courier-Mail, concurred with our view on ABC TV’s Insiders (9/6/19), saying:

They (AFP) were just trying to send a message to the media and to people who might act with the media to get information out – don’t do it because this is what happens when you do.”

This is a really serious escalation of the attack on the free media and that hits the public. This is not just about the media.

It is about any person out there who wants to tell the media about a bad hospital or a school that is not working or a corrupt local Council.

The message from the AFP in my view to all of these people is watch out because we will be able to find out who you are and will come after you.”

There are direct and indirect effects on the health of all Australians from a growing climate of fear, intimidation and suppression for those who wish to act in the public interest by speaking truth to power.

There are already serious disincentives for whistle blowers acting in the public interest including social stigma, career damage and costly legal entanglement. Yet, these raids significantly raise the bar to include criminality.

It could be about the doctor deciding not to expose big pharma covertly influencing health policy, the research scientist who discovers flaws in official CO2 emissions data, or the public health bureaucrat who is encouraged to fudge a report on reservoir water quality.

What fate awaits the clinicians who have already exposed the abysmal living conditions for and health status of asylum seekers on Manus and Nauru? What of the dilemma facing a public servant should they discover covert government plans for mass involuntary quarantine detention centres in response to a highly infectious pandemic?

In 1986 the Soviet Government dealt with the Chernobyl disaster by first keeping secret any information including the impact on health and the number affected and then relaxed the national exposure standards to lower the bar and claim a lesser risk.

Incidences of suppression experienced and observed grew fourfold over those five years. Most of the suppressed information concerned performance of health services, health status of vulnerable groups or harmful environmental exposures. Over a third of the academics surveyed had witnessed suppression and over a fifth had experienced it themselves.

Since that study was published, that trend has been exacerbated and accompanied by an increased corporatisation of our public health research culture and its institutions.

At a time when investigative media reporting is under threat, dissemination of health-related information that is seen as counter to government or corporate interests relies more and more on a free media sector.

The AFP raids, although based on old laws, must be seen in the context of the vast, far-reaching and hastily drafted range of security legislation passed with bipartisan support over recent years. Inevitably they impose a on chilling effect on the willingness of news and current affairs media to report on government activity seen to threaten the public good.

The transparency and accountability of government is thus severely compromised when the fourth estate is cowered in this way. The legitimate importance of national security may be devalued.

Ill-considered acts of overreach like these raids call into question any move by the AFP and the Department of Home Affairs that claims to be based on security concerns – even if these prove subsequently to be genuine.

Journalism itself is in risk of being redefined as a crime.  Truth-telling is being seen as a risk to security. It seems likely that people whose only offence has been to speak out in the public interest will be going to jail.

ABC News now advises would-be whistle blowers to contact them via snail mail to arrange a meeting face-to-face. It is too dangerous to use electronic communications.

Those of us who have been watching The Handmaiden’s Tale and its portrayal of decline into a society with little personal freedom may feel very apprehensive about our future society.

The indirect effects of these raids on health operate through fear and a loss of control. Simply put, oppressing people working to expose government wrong doing suppresses public interest and that in turn suppresses public well-being, including health.

Studies conducted by Professor Michael Marmot and colleagues on the health of British civil servants demonstrated that the capacity to have control over one’s own life is a major social determinant of health. People’s health suffers when they have low control, and low satisfaction and weak social supports.

The researchers found those civil servants with less control experienced increased angina, electrocardiogram evidence of ischaemia, and symptoms of chronic bronchitis. Self-perceived health status and symptoms were worse as job status and power to control diminished.

These raids create at the very least a threat of citizens losing control over surveillance of government activity.

The vision of dark-suited big men going through ABC computer files or a journalist’s bedroom drawers sends a chill down the spines of many Australians. How many thought, ‘if I had made that phone call or put in that complaint, could that have been me?’

We know stress and fear triggers biological processes – fight and flight response hormones that are adaptive for coping with immediate threats, but harmful as chronic background stimuli. These have obvious physical impacts such as diabetes and hypertension, but we also know that social isolation and stress contribute to the incidence of mental illness.

A society where government agencies have the power to detain and jail for extended periods without charge or trial is eroding social and emotional wellbeing in its population.

These raids and the powers implicit in them clearly diminish the agency and capacity of those who try to shine a light on the workings of governments. But the effect goes more widely and creates an atmosphere of fear and a culture of increasingly threatened  authoritarianism. Thus the agency of all citizens is diminished.

Social capital is an important determinant of population health, based on social cohesion and built on trust.  Societies that encourage the identification and punishment of critical voices destroy trust.

We saw that at its extreme in the former East Germany as graphically portrayed in Anna Funder’s investigative report published as Stasiland. Huge numbers of informers helped build a society where trust amongst fellow citizens effectively vanished.

Dr Frank Elgar explored trust and population health in 33 countries and concluded that: “Societies with low levels of trust may lack the capacity to create the kind of social supports and connections that promote health and successful aging”.

In his book Social Capital, David Halpern studied levels of social mistrust across US states. He concluded that social capital is dependent on trust and that it, together with levels of economic inequality, and patterns of public expenditure form a triangle of reciprocal relationships that drive population health– for better, or for worse.

The health of Australians is determined by a similar complex interplay. To the extent that it can be managed,  that interplay depends on access to good reliable, current information. For this we rely increasingly on a free media for the frank and fearless advice we once got from our public servants.

When powerful sections of government and the public service are opening up new frontiers of media suppression and whistle blower intimidation, the health and wellbeing of the nation is under serious threat.

• See more articles in Croakey’s ongoing series about public interest journalism as a determinant of health. 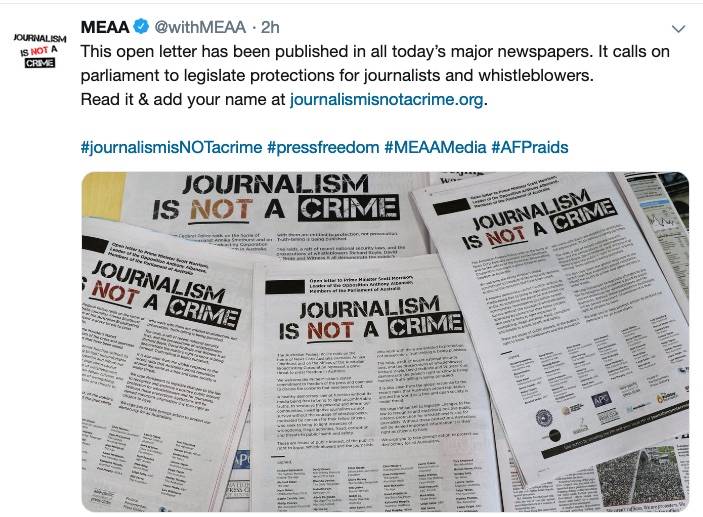