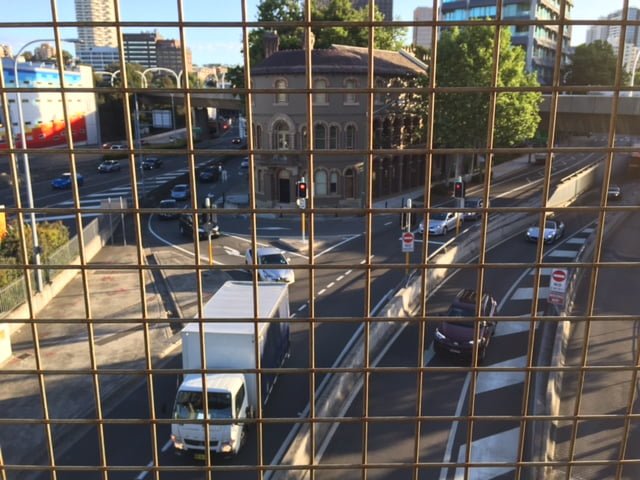 How might this view change, if NSW planning laws centred public health?

Amendments to NSW planning legislation are due to be debated in the NSW Parliament this week; however, it seems that an important opportunity for improving public health is in danger of being lost.

The article below – by Wendy Oakes, NSW Senior Policy and Advocacy Manager  of the Heart Foundation ­– is published as part of Croakey’s ongoing series, Looking Local, which examines opportunities for local leadership in public health, at a time when national leadership is in short supply.

Public health advocates in NSW are currently resuscitating a campaign they thought they’d won in 2013 – to have “health” included in the Objects of NSW’s planning legislation, the NSW Environmental Planning and Assessment Act 1979.

In 2013, after extensive public consultation and review of the Act, the then Planning Minister (and current Health Minister, Brad Hazzard) introduced an amendment Bill to replace and update the 1979 legislation. “Health” was specifically included as an Object of the Act in 2 clauses relating to buildings and the built environment.

Other aspects of the Bill relating to planning controls were highly contentious. When the Planning Bill 2013 went to the Legislative Council (NSW Parliament’s ‘Upper House’) amendments were introduced which were unacceptable to the Government so the Bill was allowed to lapse and was never passed.

Fast forward to 2017 – a new Premier, a new Planning Minister and a new Amendment Bill. As a result of the Grenfell Tower fire in London in June this year, health and safety in relation to building construction and maintenance has made it to the new Environmental Planning and Assessment Amendment Bill 2917.

BUT health in relation to the design and planning of the overall built environment has been dropped.

For anyone who has worked in public health, putting health into planning legislation seems a no-brainer. After all, the field of public health as we know it today arose as a result of a lack of regulation by local authorities that led to the residents of Broad Street in London in 1854 being provided with water from a source contaminated with sewerage.

From the earliest days of Sydney Town, the history of planning legislation in NSW is a history of Governments addressing health problems through planning legislation, and dealing with opposition from vested interests. The City Improvement Bill of 1877 is an example – instigated by outbreaks of disease and unsafe buildings it was attacked and amended by parties protecting the rental incomes of property owners and not finally passed until 1879.

Despite the opposition, the epidemics of infectious diseases that wrought havoc on the early colonies in Australia were progressively reduced through better housing to reduce overcrowding, provision of clean safe amenities such as drinking water, and removal of infection harbouring waste. As new vectors for disease and sources of ill health have been identified, it has been the Government authorities which have stepped in on behalf of the community to regulate and legislate. No surprises there.

So why should it come as any surprise that the legislation that directs and oversees the planning and physical construction of our modern communities includes a requirement that health impact must be a consideration in decision-making processes?

Urban planning is a complex animal in Australia, reflecting the three levels of government that have jurisdiction over different parts of the process.

However, it is state governments that arguably hold the greatest power to shape the cities and towns where we live, either directly or through their direction of local government powers.

The current planning legislation in most states is actually not very old but many states have been reviewing and ‘reforming’ their planning processes in recent years. One reason for this is the almost inevitable public conflict that surrounds any significant urban development.

Community members are better educated and have better access to public platforms to make their objections heard; large corporations tendering for big developments have significant finances at stake and exert their political influence to sway decisions their way; and local government is increasingly caught between the demands of the two. Additional pressure in recent years has been being brought to bear by state governments that want to achieve a statewide agenda, focusing on economic growth and increasing the supply of housing.

The foundation of good public policy – and good legislation – is a clear understanding of why an Act of Parliament is needed and what it is trying to achieve. Acts are subsequently overlaid with Regulations and interpreted through Departmental policy and (sometimes) Court decisions.

At any of those stages, going back to the reason the Act was created – the Objects of the Act – provides a benchmark or measuring stick by which it can be judged that something complies with or doesn’t comply with the intention of the legislators when they wrote and passed the Act.

That’s why having ‘health’ as a specific item in the Objects of the Act is so important.

For example, in the NSW Environmental Planning and Assessment Amendment Bill 2017 introduced into Parliament on 18 October, legislators show their concerns about the social and economic welfare of the community, proper management of natural resources, ecologically sustainable development, business, employment and housing opportunities, conservation of native animals and plants, management of built and cultural heritage (including Aboriginal cultural heritage), good design, and community participation.

But nowhere in the long list does it say that the health of the community should be a consideration in planning and building the cities where people live.

Most alarmingly, the new Objects are totally silent on the Act’s responsibility to manage the risk factors that now cause the greatest ill health in our community – chronic diseases such as heart disease and diabetes.

The so called ‘lifestyle related risk factors’ for chronic disease – including lack of physical activity, poor nutrition and obesity – are largely the result of the way we live. And the urban environment that is built around us exerts a significant influence on that lifestyle.

Healthy urban design is now a well-established field and there are design principles readily available for urban planners and others involved in designing healthy cities.

Other States have already addressed the deficiency in their planning legislation.

The Heart Foundation and others including the NSW Healthy Planning Expert Working Group are actively advocating to the NSW State Government to do the same. There’s still time to add your voice through social media or a direct letter to the Minister.

It’s not complicated – we suggest a slight change to the wording of (g) to read:

To promote health, amenity and quality in the design and planning of the built environment.

It seems a small change when it can provide such great returns for the health and wellbeing of the community.

• Wendy Oakes is NSW Senior Policy and Advocacy Manager  of the Heart Foundation.