As previously reported, Sweden has shown it is possible to reduce prescribing of antibiotics.

The NPS is hoping so – as you may have heard, it has launched a campaign using social media and mainstream media to engage the wider community in tackling inappropriate use of these drugs.

(And on Thursday, the Chair of the NPS Board, Dr Janette Randall, is scheduled to address the National Press Club in Canberra  on: “Back to the future: life without effective antibiotics”. More details at bottom of post.)

It’s hard to believe that before the discovery and use of antibiotics, an infection from something as simple as a scratch had the potential to kill.

It’s even harder to believe that we might be returning to an era where bacterial infections could again kill unabated – but this is fast becoming a reality. There is a real chance that 2030 will be like 1830 when it comes to management of simple infections.

The message is clear — the world is running out of effective antibiotics.

And if we don’t act now to combat the development and spread of antibiotic-resistant bacteria, we could find ourselves in very dangerous territory, with a plethora of hard-to-treat illnesses causing serious complications, or even death.  The World Health Organization has labelled antibiotic resistance as one of the greatest threats to human health today.

It’s this lack of knowledge which contributes to consumers taking antibiotics with a sense of complacency. But taking them ‘just in case’ even if they’re not really required is more likely to be damaging than not taking them at all.

The research by NPS also indicates that we often go to our GP expecting antibiotics, with 1 in 5 respondents saying they expected their GP to prescribe them for themselves or their child for a cough or cold.  When asked if they expect to be prescribed antibiotics for an ear, nose, throat or chest infection, this number jumped to almost 4 in 5 (79%).

It turns out we’re also not shy when it comes to asking for antibiotics, with more than half of respondents (51%) saying they would ask their GP to prescribe antibiotics when they have an ear, nose, throat or chest infection. Requests for antibiotics to treat their child’s cold or cough were double that of parents asking for one themselves (14% vs 6%), with fathers more likely to ask than mothers (22% vs 9%).

The global misuse and overuse of antibiotics has driven us to the edge of the cliff in our ability to treat bacterial infections. This is why NPS is launching the consumer phase of its new 5-year campaign to tackle antibiotic resistance in Australia.

The overall goal is to reduce the incidence of antibiotic prescribing by 25%, which would bring Australia in line with the OECD average of defined daily dose of antibiotics per capita/per day.

The good news is that if we can curb our use of antibiotics, we can reduce bacterial resistance to antibiotics. The actions of every individual makes a difference to the future of our children.

The NPS campaign will encourage all Australians to sign up via Facebook and become antibiotic ‘resistance fighters’, pledging to take some simple actions to fight the increase and spread of antibiotic-resistant bacteria in the community. 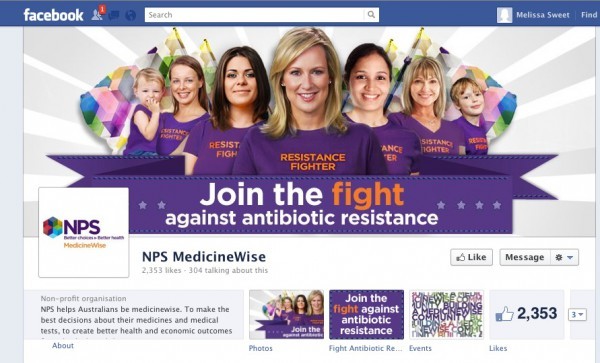 Resistance fighters are everyday Australians who don’t expect antibiotics for viral illnesses, such as colds or the flu, who take antibiotics exactly as directed by their doctor when they are prescribed them, and who practice good hygiene to help stop the spread of germs.

If 35,000 Australians sign up to join the fight against antibiotic resistance, this would help put us on the right track to reducing Australia’s antibiotic use in line with the OECD average.

The mass media component of the campaign will feature advertising and community service announcements on television, in print and online, to raise awareness of the issues regarding antibiotic resistance.

This will be supported by a number of consumer interventions to help change attitudes and behaviours towards antibiotic use, including a new antibiotics iPhone app (launching next month) which helps people who have been prescribed antibiotics to take them exactly as directed (dose, frequency and duration) and allows users to track their daily health.

Running alongside this is the campaign for health professionals, providing a number of resources and interventions for GPs, pharmacists, nurses and others to promote use of best-practice guidelines for URTIs, encourage symptomatic management of colds and the flu, and to facilitate better patient communication when discussing antibiotic resistance and correct use of antibiotics.

A similar effort was first launched in Sweden in 1994, followed by a number of comprehensive campaigns to address the misuse of antibiotics. The result was a 22% reduction in antibiotic prescribing between1993 and 1997. In 2010, a study showed that 78% of the Swedish population is willing to abstain from antibiotics.

If we could achieve a similar result in Australia, it would have a great impact on reducing antibiotic resistance.